The “general election” of the popular idol group AKB48 has become a major event on the calendar every year, not only among fans but average Japanese as well. Surprisingly few people know, however, that the idea for the election sprang out of the fan base, rather than being a top-down decision made by the group’s producers.

Some fans were upset that the producers allowed AKB48 member Maeda Atsuko to always be front and center at the performances. This led to the proposal that the fans, rather than producers, should decide who should enjoy that honor. No one could have imagined at the time, however, that this idea would develop into an event of such momentous proportions.

Before the “general election” arrived, it was completely taboo for the relative popularity of members of an idol group to be made so apparent. For example, when idol groups held “handshake events” for members to meet and greet their fans, it was quite unusual for the members to stand separately as individuals, since it would be clear which ones were more popular than others. And the downplaying of individual popularity was also seen in the approach to group merchandise. Even though it was common to have goods featuring individual members, and those goods were produced in accordance with each member’s popularity, the producers were careful to not let fans know about the exact figures—and in some cases went so far as to box unsold merchandise and store it away from prying eyes.

So it was unexpected for AKB48 to decide to turn this taboo on its head by ranking the popularity of its members in such a completely clear way. And this refreshingly frank approach is no doubt why the event created such a sensation.

Money Not the Key to the Election

The general election is sometimes ridiculed as a “bought election” since the right to cast each ballot requires the purchase of a ¥1,600 AKB48 CD—allowing fans to cast as many votes as their wallets will allow. So clearly money is an issue. But I want to insist strongly here that such criticism of the event is based on a misconception.

Many aspects of the general election cannot be influenced easily by money. First of all, even if a person wants to make a bulk purchase of CDs, the options available are limited. Most online stores or CD shops place limits on the number of the ballot-earning CD that an individual can purchase. And even if there is no limit in place, there are still only so many copies that a person could obtain from a single retail outlet.

So a person would need to make purchases from a dozen or so different stores to be able to get hold of 1,000 ballots. The only other option would be to reserve the bulk purchase from the official site in advance. But that would require planning a purchase over a month before the event. So it would be quite difficult to purchase a huge number of ballot CDs during the two-week election campaign.

The second big misconception I want to address concerns what happens even if someone purchases a bunch of CDs. The next step would be to actually cast the ballots, which is a time-consuming process. The buyer needs to unwrap each CD to remove the ballot, and then access the voting website to select which member—among the 296 in total—to vote for and then input the 16-digit randomly arranged letters for that member. Even if the voter masterfully performs this operation, it would still take around a minute to submit each vote.

In other words, each voter could only cast around 50 or so votes an hour; meaning that it would take 20 or so hours to cast 1,000 votes—and the voting period only lasts two weeks. Not that many people have 20 hours to devote to this endeavor during a fortnight.

All of this means that it is nearly impossible for a single person to cast 2,000 votes, not to mention 3,000, during the election period. When you take into consideration the effort the voting process requires, not to mention the financial burden it would require, it is also unlikely that anyone could hire someone else to do this work. Doing that would require finding people you could trust and carrying out a planned voting operation. The obstacles involved are far greater than most people outside the group realize.

Fan Bases Mobilized for the Election

When Sashihara Rino won the 2013 general election, there was a lot of talk on the Internet about how her victory had been buoyed by the 9,000-plus votes she received from fans in China.

These votes came from Sashihara’s overall fan base in China, but it was surprising that those votes constituted at least 6% of her overall vote tally of around 150,000. The popularity of AKB48 outside Japan is clear from the clamor of Chinese you can hear among the fans at the group’s handshake events.

However, as noted earlier, having the financial resources alone is not enough to accomplish bulk voting; it is also essential to have the organizational prowess and information-gathering ability. And the fans in China managed to come together as one for the voting, despite the hurdle of having to vote from an overseas location. And, of course, there are similar coordinated efforts that take place within Japan. Each of the 296 candidates in the general election this year was supported by her own “committee” of ardent supporters working behind the scenes.

My view is that what makes the marketing strategy of AKB48 truly groundbreaking is how it incorporates such proactive efforts among fans. This is apparent from the example of how performance in the general election depends less on money than on the solidarity of each member’s fans.

It’s rather amazing that the country’s top idol group has stuck to the model of direct fan interaction that is more common among the “underground” groups that are off the media radar and make their living mainly through live performances and events.

The sort of “contents culture” fostered by the fan base is an often seen phenomenon on the Internet, as in the recent example of Hatsune Miku, a humanoid singing application character. What these examples share in common is how the passion of some diehard fans energizes the entire fan community.

Personally, I think that the best promotional approach these days is the one used for Hatsune Miku or AKB48. That is, in recent years they have stuck to the extremely “analog” approach of organizing events for fans to actually meet and greet the group members or characters. This is an approach that is quite well suited to our Internet age and I think it provides some hints for next-generation content strategies. 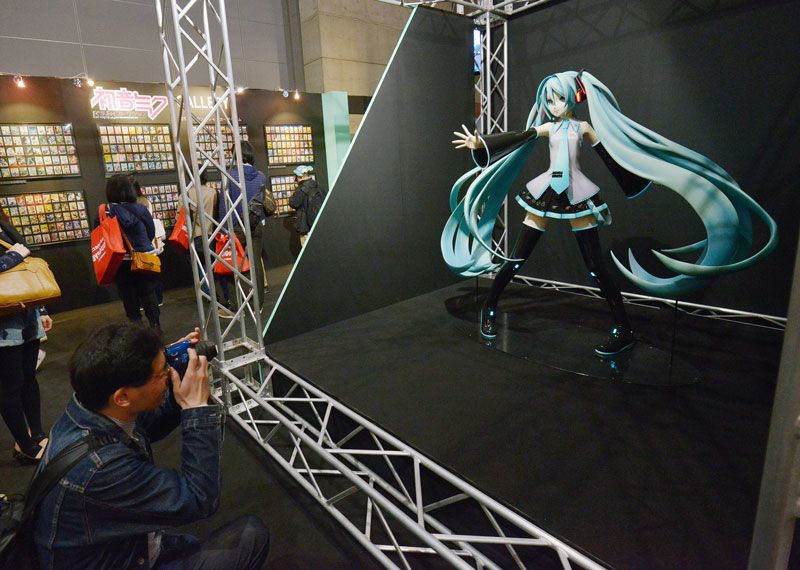