Several major Japanese cities have a slum district known as a doya-gai. The word doya is a venerable piece of Japanese street slang. It is the word yado (an inn) reversed, and it means a cheap lodging place. The nearest English equivalent would be “skid row”—in both cases, we are talking about a slum that is populated almost exclusively by men. The most famous ones in Japan are Kamagasaki, in Osaka; San’ya, in Tokyo; and Kotobuki, in Yokohama. 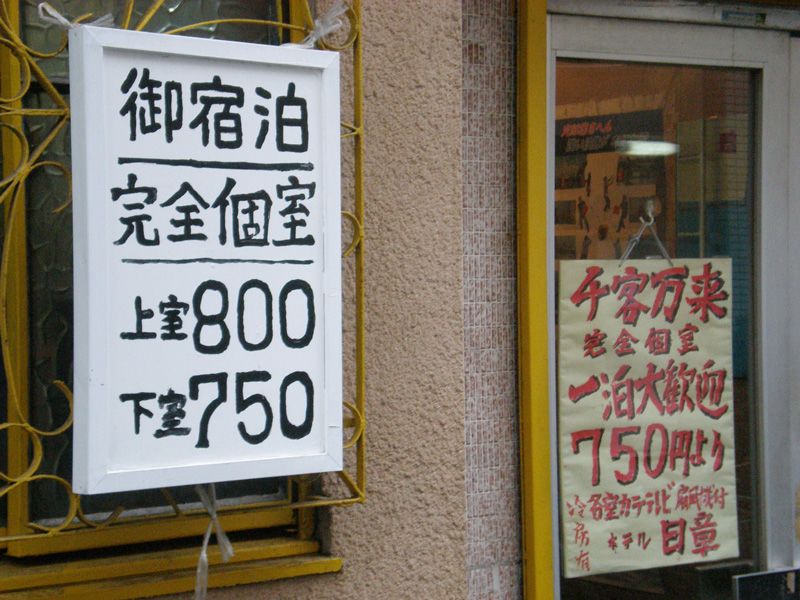 The cheapest doya in the Osaka doya-gai of Kamagasaki can still be rented for less than ¥1,000 a night.

Doya-gai are a sort of last-resort refuge for men with troubles. Perhaps they have lost their job, their marriage has broken up, they have lost their home through failure to pay the rent, or they have just emerged from a spell in prison with nowhere to go. In such cases they can still go to the doya-gai. There they can rent a cheap room, without having to provide evidence of identity, a deposit, key money, or a guarantor, all things that can be difficult for such men to furnish. It used to be that they could also find casual employment—not well-paid, but still providing enough to eat, drink, and pay the rent on the room.

Many Japanese are barely aware of the existence of doya-gai. To those who are aware of them, they are synonymous with the very rock bottom of society. They are commemorated in humanistic ballads of the 1960s like Okabayashi Nobuyasu’s "San’ya Blues" or Mitsune Eiji’s "Kamagasaki Ninjō" (The Humanity of Kamagasaki).

The Struggle for Existence in Post-Bubble Kotobuki

Kotobuki, my local doya-gai, is set amid prime real estate in the heart of Yokohama. It is close to Yokohama Stadium, where the DeNA BayStars play their home games, the trendy Motomachi shopping district, and Chinatown. In fact as well as being a doya-gai, Kotobuki is also a sort of Koreatown in the sense that most of the doya are owned by ethnic Koreans. However, you see few outward signs of that as you walk around Kotobuki.

Left photo: Listening to a Christian sermon on the street in Kotobuki. If you listen to the end, you can get a free meal. This is called āmen de rāmen (saying amen to get a bowl of noodles). Right: Men lining up for a food handout from volunteers in Kotobuki.

I have been studying Kotobuki and other doya-gai for some 20 years, during which they have shown a drastic transformation from workers’ towns, to welfare towns.

In 1993, when I first arrived in Kotobuki, most of the men living there were day laborers. Every morning they would get up very early—at four or five in the morning—and try to find employment for the day. There is a street labor market in Kotobuki, called a yoseba, or gathering place, where the recruiters are mostly affiliated with one of the local yakuza gangs. There are also two public casual labor exchanges, one run by the Ministry of Health, Labor, and Welfare and the other by the local government.

In the mid-1990s, life for day laborers was very tough. Following the bursting of the bubble economy at the start of the decade, demand for casual labor had slumped. Most of the jobs for day laborers are in the construction industry, which in Japan is organized through an elaborate pyramid of contractors, subcontractors, and sub-subcontractors. Day laborers are at the bottom of the pyramid, extra hands hired when work at a construction site is especially busy. So when the bottom fell out of the Japanese real estate market, the effect on the doya-gai was devastating. As the 1990s continued, the daily struggle for work intensified. Men would be standing outside the casual labor exchange hours before it opened at 6:15, trying to get an advantageous position in the scrum that ensued the moment the metal shutters went up.

By the end of the decade, there were so few jobs left that most men had given up the struggle and there was an eerie quiet at the labor exchange.

More and more men were unable to afford the rent on their doya rooms, and slipped into homelessness. There would be dozens sleeping around Kotobuki, and hundreds more in the surrounding streets—at Kannai station, or in the lee of the baseball stadium. 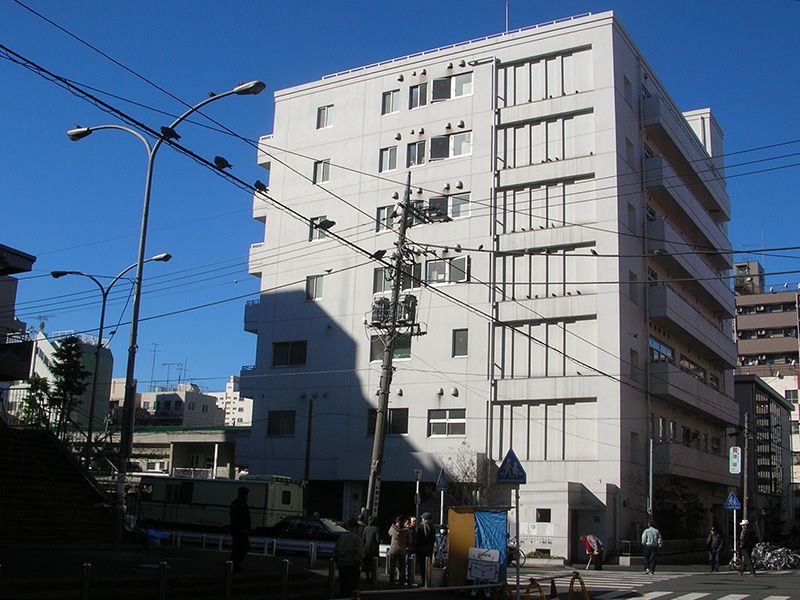 Nowadays there are somewhat fewer homeless men living on the streets of Yokohama. This is part of a national trend: Japan’s official homeless population has declined from 25,296 in 2003 to 7,508 in 2014. This improvement is partly due to the passing of the 2002 Homeless Self-Reliance Support Law, which had a 10-year limit but was extended for five more years in 2012. Under this law national and local governments have shared the cost of constructing a network of municipal homeless shelters designed to get people off the street and help them to get back in employment and housing.

One of those shelters is Hamakaze, Japan’s only purpose-built, permanent homeless shelter, right in the middle of Kotobuki. It is a white seven-story building with 250 beds—230 for men, 20 on a separate floor for women—in shared rooms with four to eight beds each. The maximum length of stay is one month on the lower floors and six months on the upper floor, which is reserved for people who have got a job and are building up their savings towards moving into a place of their own. Multiple periods of residence are permitted, although one must wait at least one month before applying for readmission to the lower floors. Thus some men have developed a cyclical lifestyle, alternating a month in Hamakaze with a month on the streets. 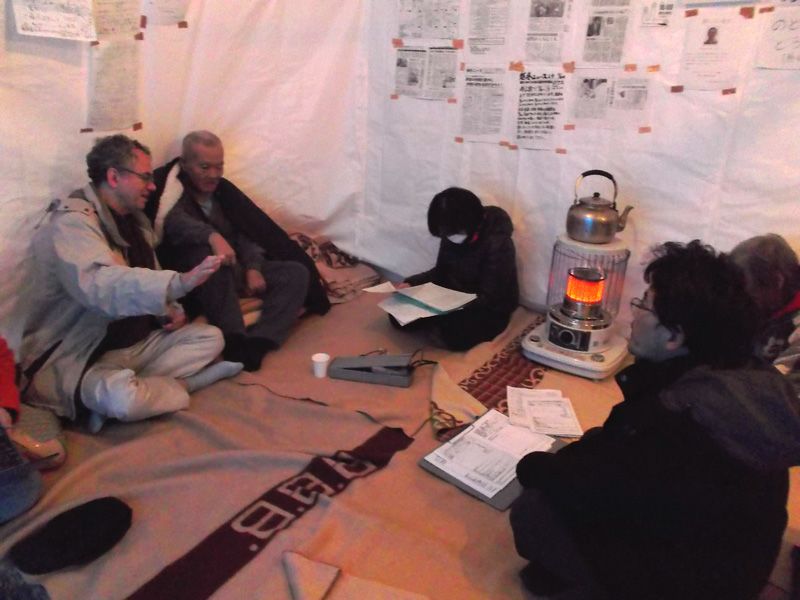 Inside the care tent at the 2013 Kotobuki winter survival campaign. The author is at the far left.

But there is another, bigger reason why the homeless statistics are looking better these days, and that is the big increase in recipients of livelihood protection (seikatsu hogo), the main Japanese welfare safety net. This is designed to keep the promise enshrined in Article 25 of the Japanese Constitution, of “minimum standards of wholesome and cultured living” for all citizens. It used to be that men in the doya-gai would often be refused livelihood protection for want of a permanent address. This policy—which is not specified in the Livelihood Protection Law but was invented by local officials—ironically debarred the people who most needed welfare from even applying.

After an intense campaign by the Kotobuki day laborer union, the requirement for a permanent address as a precondition for livelihood protection was removed in the mid-1990s. The result was a big increase in welfare recipients. Kotobuki has a doya-dwelling population of about 6,500. Twenty years ago, most of them were day laborers. Today, well over 80% are living on livelihood protection.

By global standards, livelihood protection is a generous welfare system. It supplies about ¥80,000 a month, plus rent up to about ¥50,000 and free medical and dental care. Men who use their money carefully are able to remain housed and fed. There is no doubt that the doya-gai has become a more humane social environment since the days when day laborers were treated as “disposable labor” to be used when convenient and left to die on the street when too old or weak to work.

But this may not last forever. The 5,000 people in Kotobuki who use livelihood protection are but the tip of a large iceberg. From a low of 882,000 in 1995, the number of recipients of livelihood protection in the whole of Japan has risen every year, reaching 2.15 million in June 2014. At the same time, the national debt has now passed ¥1 quadrillion, and locally the city of Yokohama also has a serious public debt problem. Sooner or later, these two trends are going to force reductions in welfare payments. Indeed, just last year the government instituted a series of cuts to livelihood protection that would reduce payments by 10%.

For now, however, the aging population of Kotobuki is being looked after rather well. Care centers have sprung up between the doya, and elderly welfare recipients are visited in their rooms, served meals, and taken to daycare centers in their wheelchairs where necessary. It is impressive to see the level of care being provided here at the bottom end of society in a major Japanese city.