Halloween-themed “cosplay” events have become quite trendy in Japan these past few years. Last year on the night of Halloween, young costumed revelers took over the famous scramble intersection in Tokyo’s Shibuya district to celebrate the occasion, attracting all sorts of media coverage. This is an example of how cosplay has recently broken away from the confines of otaku culture and rapidly become a type of entertainment that everyone can enjoy. 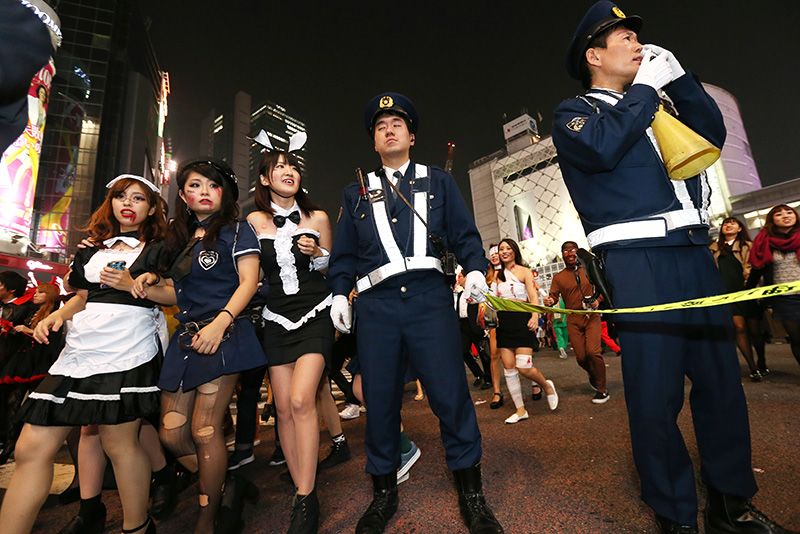 Since 2004, I have been the administrator of the Cure  website, the main online forum for Japan’s cosplay community. The site was launched in 2001, when social networking services had yet to take off, in response to demand among cosplayers for a place where they could upload their photos, and it developed into an interactive forum. Today the site has around 1.2 million members, 90% of whom are women. 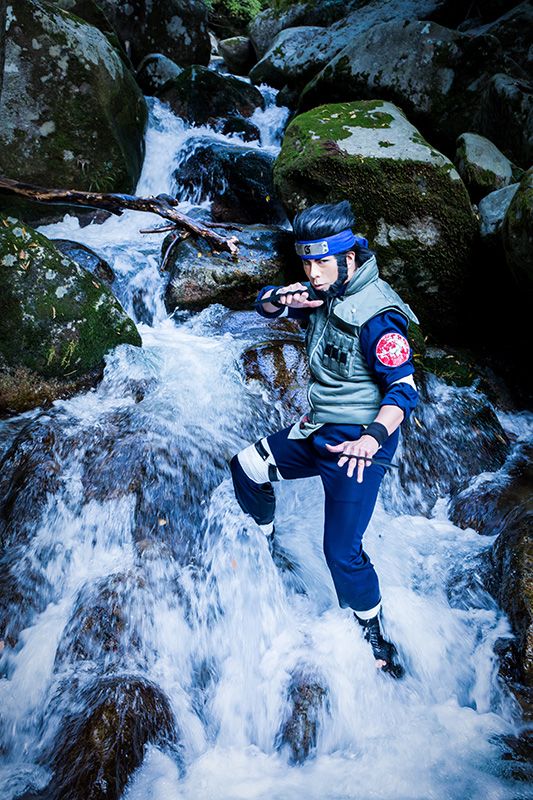 My own interest in cosplay dates back around 25 years and came about through involvement with an anime and manga fanzine network. Popular manga characters at the time were Captain Tsubasa and Saint Seiya, so many of the works created were parodies of these works. We dressed up as well-known characters as a way of communicating with our customers and thereby selling more of our fanzines directly to them.

One of the charms of cosplay is that it’s a way for a common sensibility to be shared among friends or members of a particular group. So it would be rather pointless for a person to do cosplay on his or her own. That collaborative aspect of cosplay has created a “give-and-take” relationship where everyone involved takes photos and videos of each other. And now through SNS sites it’s possible for such interaction to take place across Japan, not just in the big cities. Thanks to making friends online, when cosplayers travel to Tokyo for a major event like Comic Market (Comiket) they can enjoy a friendly atmosphere even though they are often meeting each other for the first time.

The cosplay boom got started back in the late 1980s and early 1990s. By the latter half of the 1990s, interest had spread worldwide, thanks to the popularity of the animated TV series Neon Genesis Evangelion, as fans in Japan and overseas took to dressing up like characters from the show. This was followed by other anime and manga series that inspired cosplayers, such as Naruto, One Piece, and Bleach. Those three big hits, dealing respectively with ninja, pirates, and samurai, led to a steady rise in the number of anime and manga fans overseas, while also energizing the world of cosplay.

Incidentally, in 2012, Cure set up a sister website called WorldCosplay, with content available in 12 different languages. And so far around 230,000 cosplayers worldwide have registered on the site.

A typical cosplayer is motivated by a desire to assimilate some of the attributes of a beloved fictional character. And around 80% of all female cosplayers have tried dressing up like a male character at some point. Dressing up like a fictional character also seems to allow people to recharge emotionally. Particularly for those who have a hard time talking to other people, cosplay can offer them a chance to feel more confident in their personal interaction by taking on the role of someone other than themselves.

There is a major difference in outlook between the cosplayers who register on Cure and those who dress up for Halloween revelry. Whereas the former want to take on the role of a manga or anime character, the latter have a more casual, party-going attitude, where the main aim is to look cute. Over the past several years Halloween cosplay events are becoming more and more popular as both of these cosplayer types join in the fun.

Of course, the Halloween boom certainly is intertwined with the ulterior motives of businesses and advertising agencies. Up to now there has been a blank spot every autumn in the shopping calendar. The beginning of winter marks the Christmas shopping season of course, and earlier in the year there are other peaks in commerce, such as the New Year’s holiday, Valentine’s Day, cherry-blossom viewing in the early spring, “Golden Week” in May, and the summer holiday in late July and August. So businesses have had their sights set on Halloween as a way to fill in that last gap.

In Japan, some of the first Halloween-related events took place in the late 1990s at Tokyo Disneyland. Halloween Parades targeted children and their parents, but as the years went by more and more adults began to enjoy dressing up in costumes to attend.

Halloween parades have also brought benefits to city revitalization projects. Last year, the city of Kawasaki held its eighteenth Halloween parade, with many partygoers and cosplayers attending the event. Joining in a parade is a great way for cosplayers to get as many people as possible to check out their costumes, so this makes it relatively easy to attract participants and spectators to an event. For this reason, local governments have seen Halloween events as an excellent way to attract a crowd.

The Halloween season, which kicks off as early as late September, offers business opportunities nationwide. Much like Christmas and Valentine’s Day, Halloween will likely take root in Japan as a seasonal commercial and festive event.

Cosplayers Get Up on Stage

Halloween may be an exceptional case, but there are also around 10 to 20 major cosplay events in Japan each month. Every summer and winter Comiket is held at the Tokyo Big Sight convention center, and this gathering features Japan’s biggest cosplay event. Since 1997, the Cosplay Festa has also been held at Tokyo Dome City entertainment complex, and it is considered the mecca of cosplay among fans.

But there have been almost no cosplayers performing on stage at those events. And popularity contests among cosplayers have been taboo within the very insular community of hardcore fans. Events featuring on-stage performances have been far more common outside Japan, whether in Europe and North America or in such Asian countries as China, Singapore, and Malaysia.

The Cure website, however, has been trying to promote events featuring cosplayers strutting their stuff on stage. For the past three or four years the site has been hosting the Cosplay Collection Night at the Tokyo Game Show event. The segment, which involves around 200 cosplayers, includes a fashion show as well as other performances on stage. 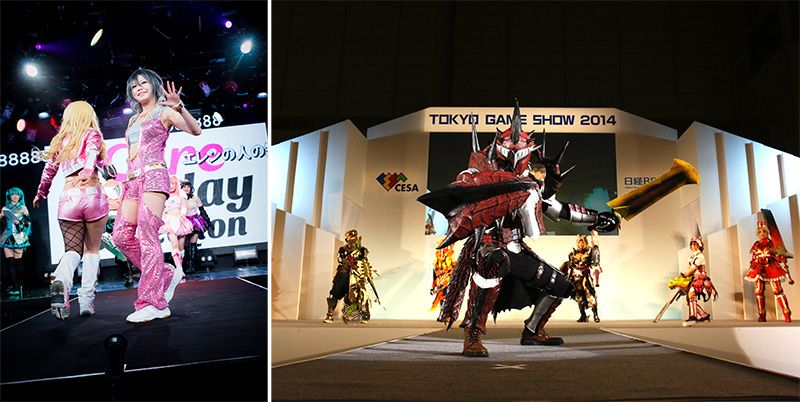 In the spring of 2015, the featured cosplay gathering will be the Cure Cosplay Collection event staged on the first day of the Comiket Special 6—Otaku Summit 2015 to be held on March 28 and 29. The Japanese qualifying round for the World Cosplay Summit will also be held during the Otaku Summit, on March 29. At that event, participants hoping to represent Japan on the world stage will compete against each other in performances and tests of their costume-design skills.

With the growing awareness of cosplay worldwide, there are more low-cost cosplay goods producers in China bringing a rapid rise in the number of purchases of those goods through Yahoo Auctions and other sites. The goods are priced low enough that junior and senior high school kids can afford to make purchases with their allowance money. In the past it was common for a person to first try cosplay around age 16 and “retire” from the hobby by 20. But recently this age range has stretched out from junior high to around 30 or so.

The number of parents enjoying cosplay with their kids also seems likely to increase in the years ahead. There’s an emerging pattern where women who enjoyed cosplay as teenagers take up the hobby with their own kids after they become mothers, while their husbands enjoy snapping photos of the costumed family members. This trend toward “thoroughbreds” raised to be cosplayers is becoming more visible. And in the years ahead grandparents might also join in the fun and dress up with their grandkids.

I hope that, as the age brackets expand, cosplay will become the sort of hobby that’s enjoyed year-round. Along with Halloween in the fall, it would be great if there were also lively cosplay events during the flower-viewing season in spring or during the summer months as well.

(Originally written in Japanese on February 6, 2015, and published on February 19, 2015. Banner photo: The author dressed up as the Silvers Rayleigh character from One Piece. Courtesy Inui Tatsumi.)