On April 28 in front of a “turn-away” crowd of well-wishers gathering on the South Lawn of the White House, US President Barack Obama and the First Lady Michelle Obama welcomed Prime Minister Abe Shinzō and Japan’s First Lady Abe Akie by warmly declaring the visit a “celebration of the ties of friendship and family that bind our peoples.” A few hours later, the two leaders issued their Joint Vision Statement. After laying out a vision for the ways the two countries would contribute to prosperity, security, and addressing global challenges, the two leaders pledged, “As we move forward, we will actively promote people-to-people exchange as a key pillar of our relationship, especially among younger generations.” Much of the media coverage and commentary focused on the important announcements related to trade, defense, and historical reconciliation. But the commitment by Prime Minister Abe to this key pillar of people-to-people relations should not be overlooked.

Introducing the Kakehashi Initiative Toward the Future

In contrast to their 2014 joint statement, which catalogued a long list of people-to-people activities, the two leaders focused on just a handful of initiatives in this year’s bilateral fact sheet: the US public-private partnership formed in the wake of the March 11, 2011 Great East Japan Earthquake, TOMODACHI Initiative; the long-standing binational CULCON (Conference on Cultural and Educational Interchange) commission, with its recent Team Up initiative and programs supported through the Japan Foundation; and the Government of Japan’s newly-launched Kakehashi Initiative Toward the Future. It is this new initiative, which Japan committed up to ¥3 billion to support, that Prime Minister Abe’s visit highlighted.

Exchanges for the Next Generation

The Kakehashi Initiative has three primary components. First are exchanges that target the next generation in both countries. Programs in this area include exchanges of high school and college students between the United States and Japan under the Kakehashi Project, as well as some internships for Japanese youth in the United States. Prime Minister Abe recognizes that such short-term exchanges are highly impactful and can be critical to introducing diverse young people to the relationship, exposing many to Japan or the United States for the first time and offering transformational experiences that can serve as gateways for deeper interest.

Prime Minister Abe took particular care to showcase such short-term exchanges in Los Angeles when he and the first lady met with several alumni of programs funded by the Kakehashi Project. My organization, the U.S.-Japan Council, partnered in 2014 on 200 student exchanges of the project and has already seen several of the participants change their majors, studies, and career choices because a new interest was sparked through these brief exchanges. 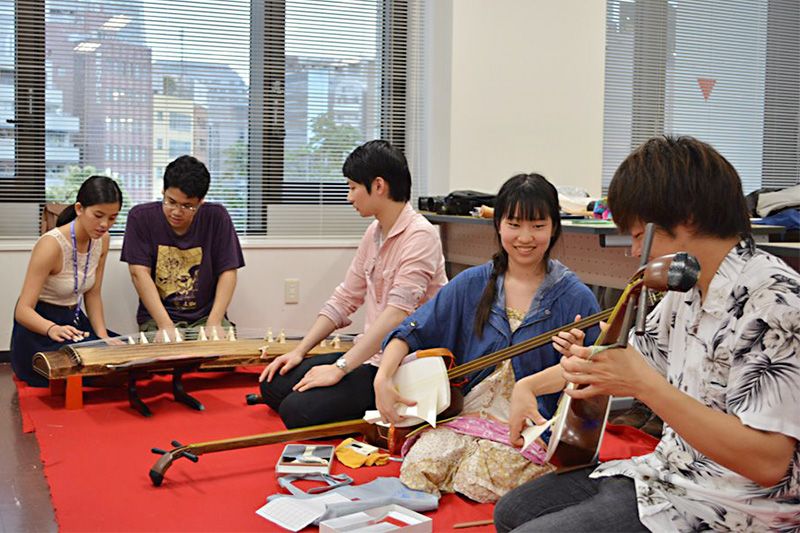 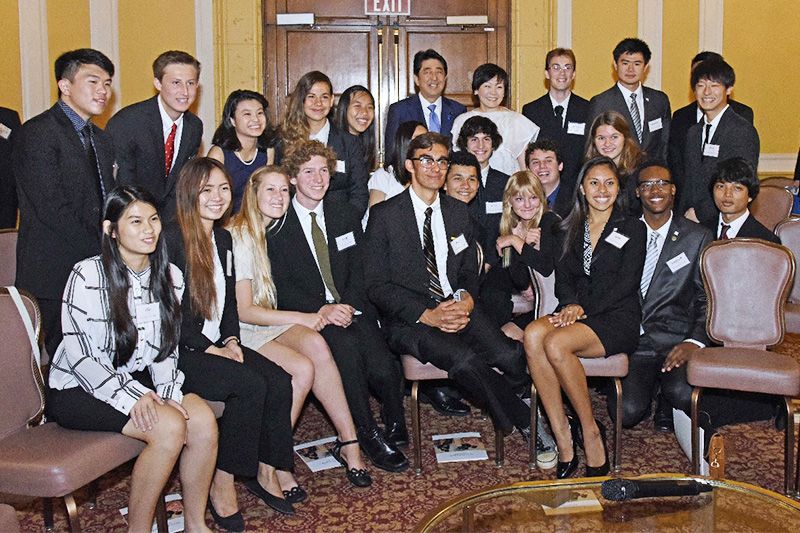 As part of the Kakehashi Project, Prime Minister and Mrs. Abe (standing, at center) meet with past participants of various exchanges from the Los Angeles area.

It was a fitting testament to the value of student exchanges that Prime Minister Abe chose to return to Los Angeles because of his time there as a student, and that Mayor Eric Garcetti welcomed Abe by citing his own fond memories as a high school exchange student in Tokyo.

Exchanges to Strengthen the Foundation of US-Japan Relations

The second component of the Kakehashi Initiative focuses on building expertise and encouraging specialization within US-Japan relations. Programs in this area include research grants, endowed professorships, Japanese language study, and mounting major art exhibitions and cultural programs. In addition, the initiative also seeks to invite diverse American leaders to Japan to introduce them to US-Japan relations. This builds on successful invitation programs for members of Congress and Japanese American leaders (the U.S.-Japan Council administers the Japanese American Leadership Delegation Program for the Ministry of Foreign Affairs), and will expand its reach to leaders from other important and diverse backgrounds. 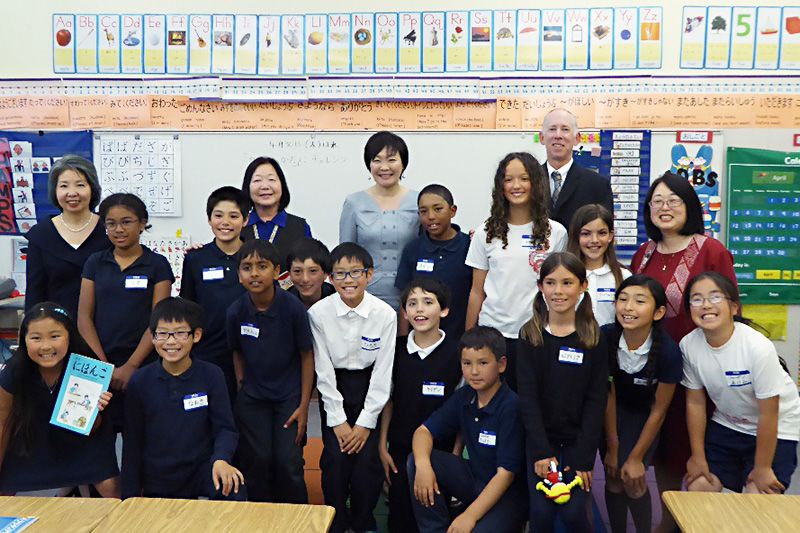 She also toured Japan-related exhibits at the Boston Museum of Fine Art. In DC, Prime Minister Abe announced a major gift to the Freer Gallery of Art and Arthur M. Sackler Gallery. Prime Minister Abe’s meetings in Los Angeles with Japanese American leaders, many of whom had visited Japan on invitational programs in the past, also highlighted his commitment to bringing more of America’s leaders into the US-Japan relationship.

The Government of Japan labels the third area of focus of the Kakehashi Initiative as “a variety of Grassroots Exchanges,” and includes programs that engage three groups with distinct connections to Japan. The most sensitive of these is former prisoners of war and their families. After too long, the Government of Japan has recently begun to embrace this special group of Americans, who symbolize how far the US-Japan special friendship has come since the terrible horrors of World War II.

Another group that the Government of Japan seeks to engage are military members who have served in Japan during their careers. This encompasses a large number of individuals who have returned to the United States from tours in Japan, usually with very fond memories of the communities that welcomed them and their families during their years posted so far away from home.

The third target area is the growing network of Japan Exchange and Teaching (JET) Program alumni. In my own experience, this group is one of the most dynamic and important networks to engage. JET alumni return to the United States with a very strong affection for and continued interest in the country they have gotten to know during years of living in a local community and are often the first to embrace an opportunity to continue to support US-Japan relations. After the March 11, 2011 disasters, the outpouring of support from JET alumni was overwhelming. During their visit to Washington DC, First Lady Abe held a roundtable with several JET alumni, encouraging them and also listening to their perspectives. 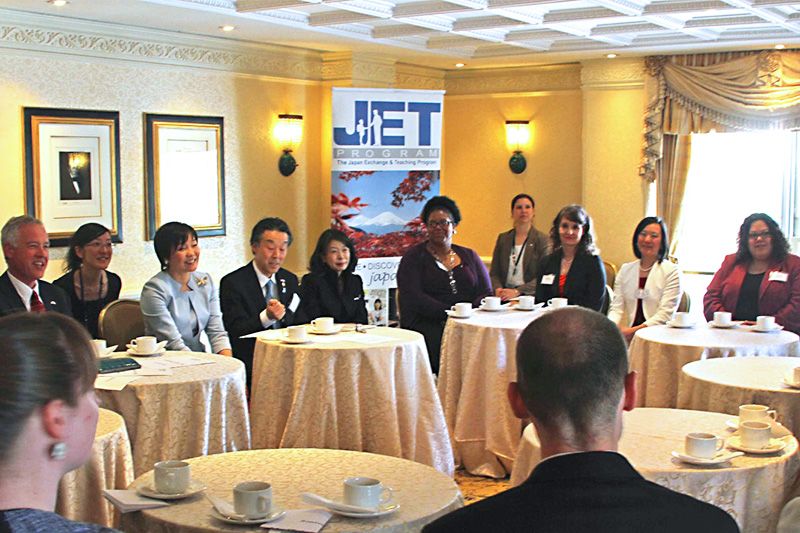 In sum, Prime Minister Abe’s Golden Week visit to the United States offered insights into his administration’s approach to people-to-people relations encompassed in the new Kakehashi Initiative. This initiative complements the other major efforts in US-Japan people-to-people relations that were highlighted by President Obama and the prime minister in their bilateral fact sheet: the TOMODACHI Initiative, with its focus on the young individuals that are the next generation of importance in US-Japan relations, as well as CULCON activities like Team Up, with its focus on university-level institutional partnerships as a key to increasing the number and quality of student exchanges.

The Kakehashi Initiative in itself is broad in its scope and includes disparate elements such as short-term exchanges, in-depth academic and research projects, and grassroots exchanges. However, the initiative’s variety should not be mistaken for a lack of focus. Its architects have developed a strategic series of activities that involves Americans all along the continuum of experience—from exposure, to inspiration, to learning, and finally to continued engagement as alumni and leaders.

As an organization whose mission is to ensure strong people-to-people relationships, the U.S.-Japan Council applauds Prime Minister Abe’s approach. Indeed, it will be the foundational people-to-people connections that ground this alliance and ensure its strength into future generations.