The invitation to write about my work with the U.S.-Japan Council provides the chance to reflect on why I place a high priority on people-to-people relations. During the early part of my career in alliance management, I didn’t fully appreciate that people-to-people ties are the base on which our security, trade, and global engagement rest. The Great East Japan Earthquake changed that. At the time, I was serving as senior advisor to John Roos, US ambassador to Japan, who had made clear from the start of his tenure that he didn’t worry about the policy disputes that were in the news; he was confident that our leaders would work together towards our common interests. What did concern him was the weakening of our people-to-people relations, especially negative trends among students.

The devastation of March 11, 2011 brought this point home. Starting with the military Operation Tomodachi, the United States rushed to provide immediate, sustained, and effective support to the Tōhoku region. Many military members felt as if their own neighbors needed help. Over 150 additional officials came to the US Embassy in support, many having lived in or traveled to Japan before. Scientists, corporations, communities, and nonprofits poured in support, drawing on previous connections. Clearly, decades of people-to-people connections had made the response possible. It was a strong reminder of the importance of nurturing such ties. Without reinforcing the foundation through next-generation leaders, the special relationship would be lost to future generations. The goodwill and renewed interest borne from the tragedy of 3/11 provided a new opportunity to strengthen ties.

In this context, I was drawn to the USJC, a Japanese American-led organization fully dedicated to strengthening ties between the United States and Japan in a global context. I saw that by promoting people-to-people relations through its innovative programs in networking and leadership, the council serves as a catalyst to inspire and engage, while developing the next generation of leaders committed to a vibrant and dynamic relationship between the United States and Japan. This is exactly what our bilateral relationship needs.

The Origins of the U.S.-Japan Council 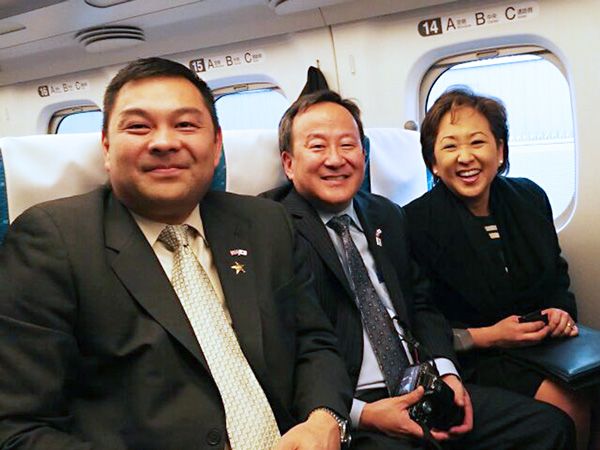 The USJC’s origins date back to a program that Japan’s Ministry of Foreign Affairs launched in 2000: the Japanese American Leadership Delegation program. Through annual trips to Japan to meet leaders from various fields, 176 Japanese Americans have been exposed to, inspired by, and even transformed by this connection to their country of ancestry. Over the years, many returned to the United States eager to build on the connections sparked in Japan. At the same time, American leaders, including the late Senator Daniel Inouye, grew concerned by “Japan passing.” He joined with others to create the USJC as a new platform to allow Japanese American leaders from varied backgrounds the opportunity to help strengthen US-Japan relations.  From MOFA’s seed investment grew a new organization dedicated to support the two countries.

3.11 and the U.S.-Japan Council: From Earthquake Relief to the TOMODACHI Initiative 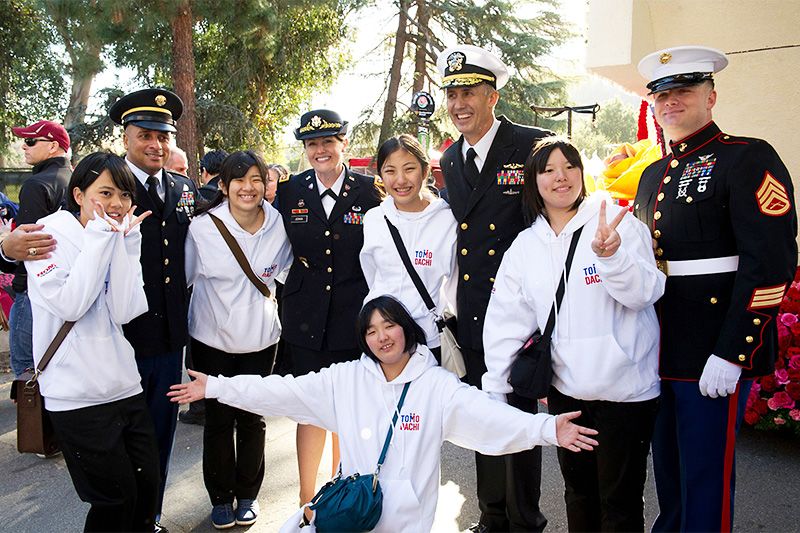 In the wake of the Great East Japan Earthquake, USJC members found a new way to direct their support to Japan. The council raised over $2.6 million to fund smaller Japanese nonprofits active in Tōhoku, and many council members volunteered in the region. The US Embassy, recognizing the USJC’s like-minded commitment to Tōhoku’s recovery, forged an innovative public-private partnership with the USJC that became the TOMODACHI Initiative. The initiative brings the best of the private and public sectors together to invest in young people. In partnership with government officials, nonprofit organizations, educational institutions, and dedicated individuals, TOMODACHI runs scores of programs each year. Through these cross-cultural leadership experiences, which build on the best of people-to-people relations, the initiative is fostering a TOMODACHI generation that will ensure a strong foundation for US-Japan relations into the future. 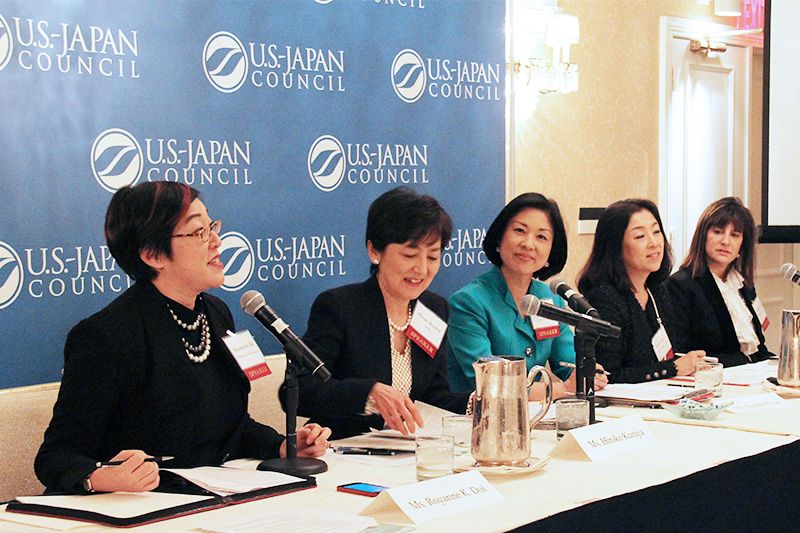 A panel discussion on Womenomics.

These examples show the council at its best—in action and making a difference through people-to-people activities. The USJC’s goal is to increase the number and the diversity of stakeholders with an interest in a strong relationship. For the long-term health of the alliance, we must ensure that those involved in US-Japan relations reflect our diversity across many measures: gender, geography, ethnic background, professional sector, and age. The council therefore holds its education and networking activities in many places, such as Hawaii, Silicon Valley, Seattle, Denver, and Houston. Programs centered on themes including women’s leadership, entrepreneurship, and regional economies help bring nontraditional voices into US-Japan relations. Innovative programs, such as the Asian American Leadership Delegation program for state legislators (now in its second year), also serve this purpose.

The council prioritizes developing next-generation leaders, most visibly through the TOMODACHI Initiative. At first, programs centered on Tōhoku youth or recovery. Hundreds of high school students from the Tōhoku region participated in leadership programs in the United States, bringing lessons about community engagement back with them. Similarly, American students visited Tōhoku and brought lessons about resiliency back to their communities. With time, participants have reflected greater diversity and inclusion: entrepreneurial Okinawan students have visited Silicon Valley; college women from Fukuoka have exchanged ideas with students in Washington DC; and young professionals from Detroit will host counterparts from Toyama. The council encourages mentoring and multigenerational engagement, empowering the next generation in dialogue with the many experienced leaders in the council.

The USJC also serves as a catalyst for new collaborations in business, government, and civil society to support greater opportunities for both countries. Nowhere is this more visible than the Governors’ Circle and the Silicon Valley Japan Platform. The Governors’ Circle started as dialogue with innovative Japanese governors, and led to memorandums of understanding between the governor of Hawaii and the governors of three prefectures. In July 2014, six Japanese prefectural governors brought delegations of small- to medium-sized enterprise business owners to Silicon Valley for a conference on collaborations in areas such as IT and biomedical science. This in turn led to a new initiative to develop infrastructure to support Japanese SMEs with opportunities in Silicon Valley, a project that received a boost when Prime Minister Abe met with Silicon Valley leaders assembled by the USJC during his April 2015 visit. 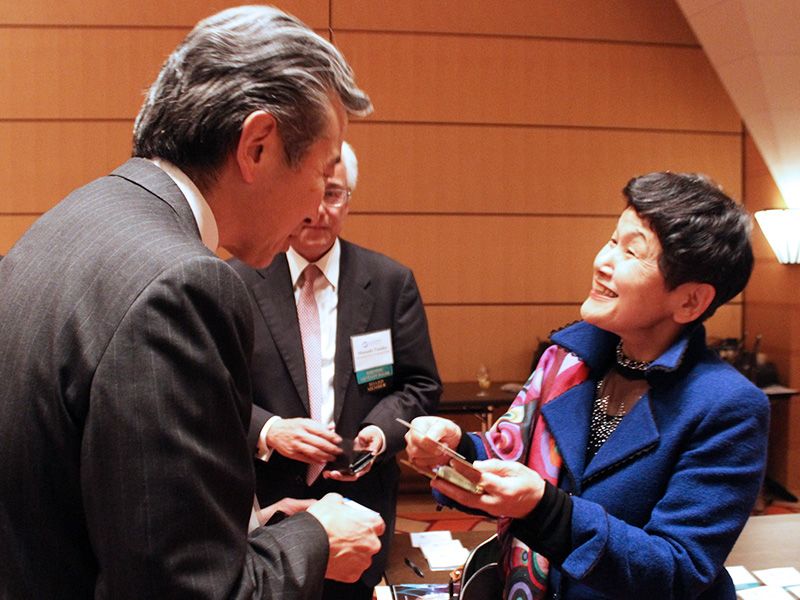 Networking at a USJC event.

The USJC’s efforts culminate annually in a conference, which will take place in Japan for the first time this year from November 9 to 10 in Tokyo’s Shibuya Ward. Council members will travel from throughout America to join Japanese leaders and hear prominent government, business, and civil society speakers on key issues; set a forward-looking agenda on topics such as investment, political engagement, philanthropy, and entrepreneurship; network; launch new collaborations; and inspire and encourage each other.

The USJC’s work is rooted in the knowledge that people-to-people relations form the base of US-Japan relations. Many before us built a strong foundation, but one that requires investments of time, talent, and resources to maintain. The council provides a platform to initiate activities that support the relationship, through bottom-up innovations by individuals. Through engaging, inspiring, and empowering others, the council’s impact goes beyond its membership. Ultimately, the council envisions a vibrant and dynamic US-Japan relationship, strengthened by the increased diversity of leaders committed to it, and positive and productive cooperation that benefits both countries and the Asia-Pacific. It’s an ambitious vision, but one that can only be achieved through the support of the people of our two countries.