Alexithymia: The Emotional Disconnect Behind the Mask of Normalcy

Society Dec 26, 2016
Psychiatrist Saitō Satoru discusses a mental disorder in which individuals become incapable of identifying or expressing their own emotions as they force themselves to appear normal before others. He draws on both his personal clinical experience and the narrative of the award-winning novel Konbini ningen by Murata Sayaka.

Alexithymia is a psychiatric term coined by combining alexia, an inability to read and comprehend characters and words, and -thymia, which denotes a certain emotional condition. Emotions must be recognized as such by an individual before he or she learns to relate to them in a healthy manner, but there are some people who fail to come to grips with how they feel. Alexithymia is a condition in which one feels so overwhelmed by emotions, such as anger or sorrow, that he or she is unable to express them.

That said, nobody—infants aside—cries or wails one’s heart out without restraint. Once one reaches adulthood, society expects people to restrain from expressing such primitive emotions. Those who cannot do so are considered to suffer from an emotional disorder and in need of psychiatric care.

Young people seeking to be “normal” will model their behavior after the adults around them and learn to control their emotions. Over time, they may lose the ability to perceive emotion, leading to hypochondria or psychosomatic disease caused by unexpressed anger and sorrow. Hypochondria refers to a condition where people develop symptoms although no pathological conditions can be identified in the body; when symptoms like hypertension and peptic ulcer appear, they are diagnosed as suffering from a psychosomatic disorder.

Alexithymia dulls one’s perception of not only sorrow and lament but also joy and elation. The inability to perceive joy is called anhedonia. Anhedonia is a phenomenon wherein individuals no longer find pleasure in situations and activities that they once found enjoyable; it is an important indicator for diagnosing melancholic depression.

The Mask of Normalcy

I have a psychiatric practice in central Tokyo that puts me face to face with people suffering from depression and hypochondria on a daily basis. Most people show no signs of agony or sorrow when I meet them for the first time. I must first peel off the normalcy that they wear like a mask before I can find what needs to be treated. 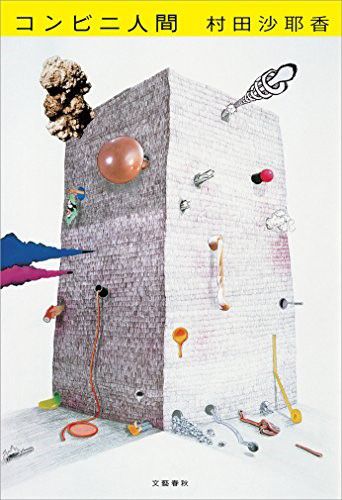 The cover of Konbini ningen (photo courtesy of Bungei Shunjū).

I came to think about this on reading Konbini ningen (Convenience Store People), a novel by Murata Sayaka that recently won the prestigious Akutagawa Prize. This is no doubt a story about a person with alexithymia. The protagonist is Kokura Keiko, who has been working as a nonregular employee at the same convenience store for 18 years. The story is told from her perspective. She has learned to make it through life by shutting down her own feelings and value judgments, instead creating a patchworked self by imitating the gestures and tastes of women around her—primarily her coworkers—whom she deems decent and fashionable. This is a useful and effective means of adjusting to her surroundings. The instant she changes into her uniform after arriving at her workplace slightly earlier than required, Keiko turns into a “convenience store worker.” All she needs to do is spend her assigned working hours using her command of the manners and judgments required in that role. For the protagonist—who was censured by her schoolteachers and bemoaned by her parents for her eccentric behavior as a child—being able to hide behind the uniform has been a blessing.

But when it hits her that others might pity her for being single after 18 years at the convenience store, Keiko grows restless. She meets a new male colleague who is a mirror image of herself. The man is convinced that he has been persecuted and rejected by society and has no intention of trying to appear normal. He gets fired from the store in no time, and Keiko invites him to live with her. They appear on the surface to be a well-matched couple, but they have no romantic feelings for one another. For hard-working Keiko, the relationship allows her to mislead others into thinking she has a boyfriend, while for the man, who has no desire to work, Keiko offers a shield behind which he can hide from a cruel world. Living with this man, though, throws her off-balance, smashing the façade that she had built up over the past 18 years.

The man’s blistering remarks expose the emptiness behind that façade, something she had always tried to deny to herself. Denial is a primitive psychological defense mechanisms—a subconscious attempt to ignore a problem or issue that is obvious to everyone else. A person who refuses to see reality in the face often appears childish and eccentric to others.

Having been confronted with her reality, Keiko leaves her job. She has nothing to do now, though, but spend her days lying in her futon, which she has laid out in the closet. This is a condition, which I call “futon addiction,” that is at the root of many addictions, from substance and alcohol abuse to sexual addiction. Both addictions and the donning of the “normalcy” mask, in fact, are desperate attempts to escape from this emotional void.

The novel ends on a “happy” note, with Keiko returning to her convenience store job. But the book will leave many readers with a gnawing feeling that their own efforts to adapt to the workplace are, just like Keiko, a mask for the sense of emptiness they feel inside.

The “futon addiction” is essentially a regression to primal sleep, seen in infants. This is what heroin addicts yearn for. People commonly known as hikikomori, referring to individuals who stay shut up in their homes, find themselves being dragged into this sort of regression, and pulling them back out is not easy.

There is one important point to note here. An infant who falls asleep while suckling from its mother’s breast will grow red with anger and scream upon waking, feeling insecure from the absence of the breast that had been there earlier.

At this stage (12 to 18 months old), infants live in a world of such raw emotions as anger, depression, anxiety, and lament. Adult hikikomori lack this kind of response. Having spent so much time refusing to acknowledge the various emotions that they feel, they quickly fall into a state of alexithymia.

Breaking the Spell of Normalcy

Such people occasionally visit my clinic, mistaking their condition for depression. One housewife who came for treatment joined the workforce the year she graduated from a four-year college but soon quit her job because she found it boring. She then began working at an S&M club, thinking of it as just a part-time job, but enjoyed it so much that she stayed on for four years. She quit the club before turning 30, thinking that she had to get out sooner or later, and got married after a spell of konkatsu (“marriage hunting”). No sooner had she given birth and started leading a “normal” life, though, than she found herself spending much of her day getting in and out of bed.

The man she married was an atopic momma’s boy who divorced her after quickly realizing that his new wife would not give him the attention he wanted. The woman came to my clinic a month after the divorce.

Other psychiatrists might have diagnosed her with depression or adjustment disorder (stress response syndrome) and prescribed antidepressants. But I realized that she was driven by a strong desire to be “normal” and that this forced her to suppress her individuality and reject the things that she found exciting.

Working at the S&M club was dangerous but also thrilling, the excitement growing from the very thought that her work was “abnormal.” Normalcy, though, is really no more than an ideal or illusion, expressed differently from one person to the next.

“I’m thirty-five now, and I’m too old to go back to that lifestyle,” she told me. I would not argue with her, but I do think that she needs to reclaim the sense of excitement that she had felt. My job is to put her back in touch with those primal emotions and to allow her to see that there is no need to wear the mask of normalcy.