A Taste for Danger: The Hazardous History of Fugu

There is a scene in a 1977 instalment of the Torakku yarō (Truck Guys) series where the main character is buried in sand up to his neck as a cure for the effects of eating fugu blowfish. The protagonist, played by Sugawara Bunta, feels his whole body going numb after partaking of the fish—famously poisonous if prepared incorrectly—and submits to the surprising traditional remedy.

The film takes place in my hometown of Shimonoseki in Yamaguchi Prefecture, the fugu capital of Japan. Two years before its release, the kabuki star Bandō Mitsugorō VIII died from poisoning after overindulgence in his beloved dish of torafugu (tiger blowfish) liver at a Kyoto restaurant. This raised the profile of fugu and its life-threatening properties.

According to the Ministry of Health, even today half of all food poisoning deaths in Japan come from eating blowfish. In a typical year, some 50 people suffer fugu poisoning in around 30 incidents, some of which result in fatalities. (There are also cases of fugu poisoning in Taiwan, where a total of 11 people died in 15 incidents taking place from 1991 to 2011.) Blowfish contain tetrodotoxin, which causes symptoms of numbness and paralysis 20 minutes to three hours after ingestion. These spread to the whole body, in serious cases leading to death by respiratory failure. People take their life in their hands when eating fugu.

“It’s total superstition!” says Ueno Ken’ichirō, owner of the Shimonoseki restaurant Fuku no Seki, which specializes in blowfish—known in the local dialect as fuku. Formerly a fugu wholesaler, Fuku no Seki is now the parent organization for processing company Daifuku, so Ueno knows his blowfish. 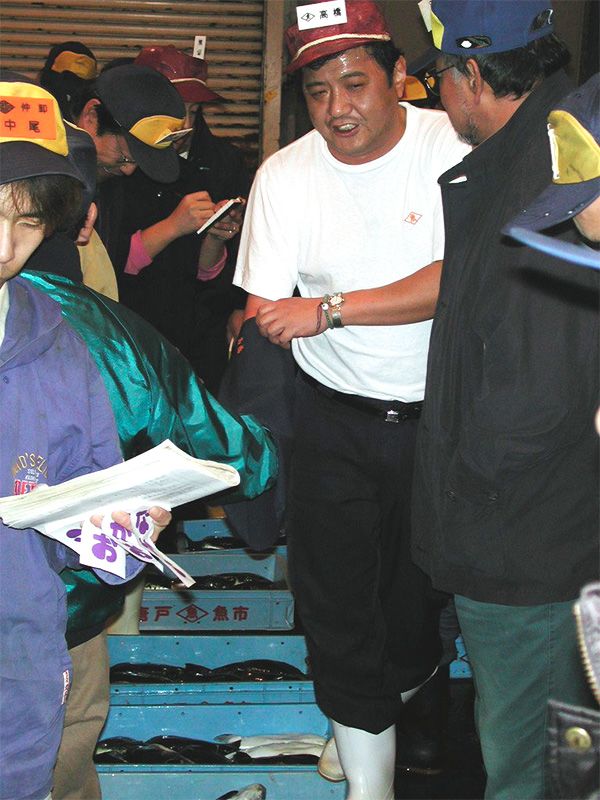 There have been no poisoning cases in Yamaguchi Prefecture for decades. Would-be fugu cooks are required to get licenses in many Japanese prefectures, including Yamaguchi, Fukuoka, Ōita, Tokyo, and Osaka. Ueno says, “There are very tight standards in Yamaguchi. We take pride in preparing blowfish safely.”

Four in five Japanese fugu caught in the wild or farm-raised—mainly in Nagasaki Prefecture—come to Yamaguchi, because of the numerous local processing companies. After toxic elements are removed in processing, the fish, rendered harmless, are shipped nationwide.

For this reason, the kind of scene depicted in the film is now almost unimaginable. Fugu served in a professional establishment very rarely causes poisoning. The vast majority of blowfish poisoning incidents in Japan occur when amateurs prepare the dish.

The case of Bandō Mitsugorō VIII was different. Probably many people now would find it difficult to understand how he considered toxic tiger blowfish liver to be a delicacy. Many gourmets of the time, however, dipped fugu sashimi into soy sauce mixed with fugu liver instead of wasabi. The poisonous elements made the tongue smart and go numb—sensations to savor while drinking. Befuddled by numbness and alcohol, Bandō consumed too much, overshooting his tolerance level and succumbing to death. Chefs would not allow this to happen today.

Shimonoseki became Japan’s fugu center in the late nineteenth century. Yamaguchi Prefecture lies at the western tip of the country’s main island of Honshū and is surrounded by water on three sides. From ancient times the area flourished through trade with China and Korea and was known as the “Kyoto of the West.”

Itō Hirobumi (1841–1909), Japan’s first prime minister, was born in the area. During one trip back home, he visited a restaurant called Shunpanrō. The sea was rough that day, so it was difficult to procure any good fish. The flustered restaurant proprietor’s wife decided to serve Itō blowfish. Although it had been prohibited by law since the rule of Toyotomi Hideyoshi three centuries earlier, locals had perfected the preparation method.

Itō enjoyed the dish so much that he lifted the ban on eating fugu in 1888. He also granted the very first license to serve it to Shunpanrō, considered the finest restaurant in Shimonoseki. In 1895, the establishment played a part in East Asian history when it was the venue for the signing of the Treaty of Shimonoseki by Itō and Chinese politician Li Hongzhang. The agreement brought an end to the 1894–95 Sino-Japanese War. 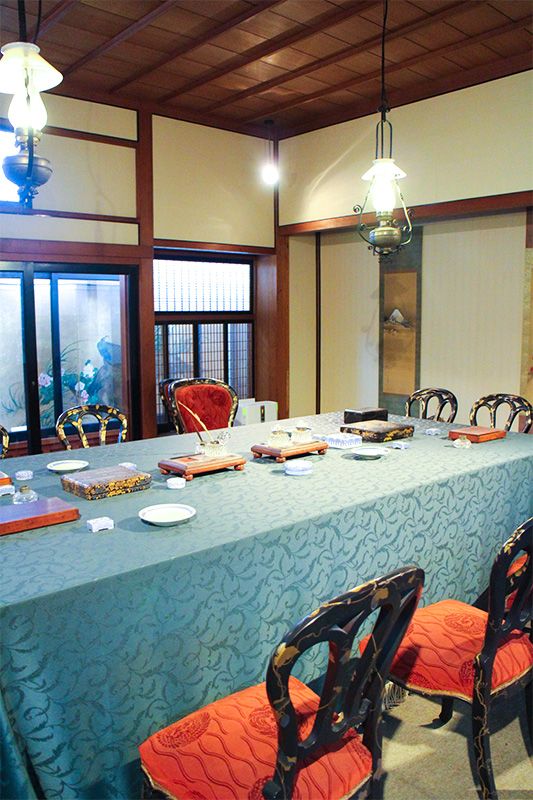 A re-creation of the room where the treaty was signed at the Treaty of Shimonoseki Museum, near Shunpanrō. (Courtesy Sumiki Hikari)

The Thrill of a Brush with Death

In the ancient Chinese text San hai jing (Classic of Mountains and Seas), written over two millennia ago, it is said that eating fugu is fatal. On the other hand, the Song dynasty poet Su Shi (1037–1101) left several poems extolling the taste of blowfish. China’s history of eating fugu was interrupted by a 1990 law banning domestic consumption and distribution. During the quarter-century that followed, a number of Chinese companies achieved success farming and processing fugu for export. Since a 2016 decision to permit limited domestic consumption once more, interest in China has been rising again.

When I asked Hong Kong music producer and foodie Yu Yat-yiu about fugu, he said that he knew of no restaurants serving it in the city today. Some Hong Kong residents did apparently eat fugu more than 70 years ago, however; he noted that that his great-grandmother once suffered blowfish food poisoning. In Taiwan, meanwhile, most people who eat fugu do so at Japanese restaurants where the chefs have obtained licenses in Japan.

In Japan, fugu remains have been found at the kaizuka or “shell mounds” that served as garbage dumps for people around the country in the Jōmon period (ca. 10,000 BC–300 BC) and later. The endless deaths from eating the fish ultimately led to Hideyoshi’s sixteenth-century ban, which continued—if imperfectly enforced—until the modern era. 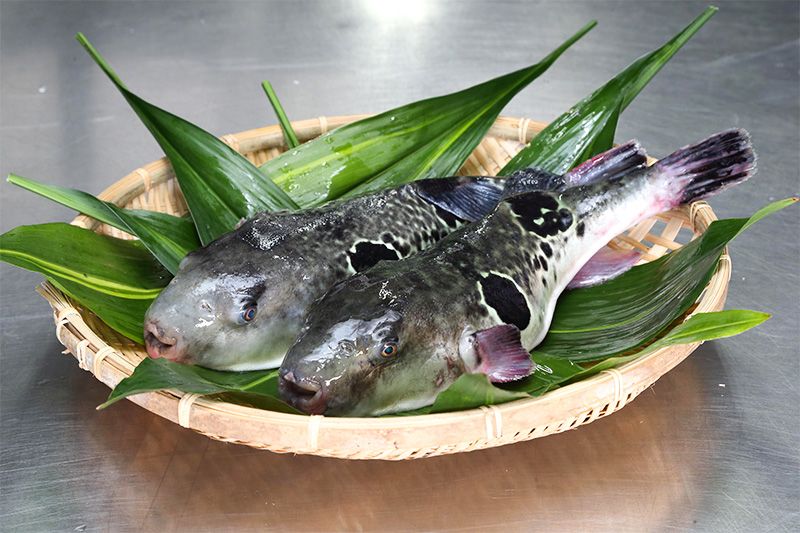 The appeal of hazardous blowfish cuisine was apparent since ancient times. Was the thrill of a brush with death really so entrancing? The boundless nature of human desire is enough to make one shudder. If fugu were not poisonous, they may not have become so highly prized.

It is now possible for ordinary people to order Yamaguchi Prefecture torafugu online for home cooking. It has taken thousands of years, but Japanese knowledge and techniques have overcome the blowfish’s toxic nature. Farming is also progressing. Nonpoisonous torafugu have been developed, and today diners can eat high-quality farmed fish all year round, rather than only in the traditional winter season.

Today’s fugu sashimi is tasty and safe. If one thinks, with a crisp, cool piece on the tongue, of how many have died in the act of eating over the years, the fish may taste all the sweeter.