Education Society Nov 6, 2018
Japanese school uniforms were first adopted more than a century ago to distinguish students attending elite institutes. The outfits have changed over time and are now standard attire at junior and senior high schools across the country. Loved by some and derided by others, they remain a central aspect of student life.

School uniforms are ubiquitous in Japan. First adopted more than a century ago, the distinct outfits are used at a majority of public and private junior and senior high schools as well as around 10% to 15% of public elementary schools. Uniforms help define a school’s identity and are revered symbols of youth. However, some people question the need for students to dress identically. The debate over school attire was poignantly illustrated earlier this year when a public primary school in Tokyo’s ritzy Ginza district caused a stir by adopting uniforms by Armani as an option for students. Below I look at the history of school uniforms in Japan and consider why they remain a central aspect of school life.

In Japan, school uniforms typically consist of a jacket, trousers for boys, and a skirt for girls. Although broadly similar in design, individual uniforms are set apart by subtle variances in aspects like color, style, and school logo that define the look for each school. Over time they have become a convenient means of categorizing a person by the school they attend.

Establishing a uniform dress code requires setting and enforcing rules. It also places a significant financial burden on families who have to provide outfits for their child. It is no coincidence, then, that the first Japanese school to adopt uniforms was Gakushūin, an academy in Tokyo catering to Japan’s nobility.

Established in the early part of the Meiji era (1868–1912), Gakushūin in 1879 adopted a uniform for male students based on the formal attire of Japanese naval officers—cap, high-collared jacket, trousers—to complement its military-style education. As outfitting a child in Western clothing was a costly endeavor affordable only to members of the upper class, the uniform distinguished Gakushūin students as elite, and in time other schools adopted it as a model. 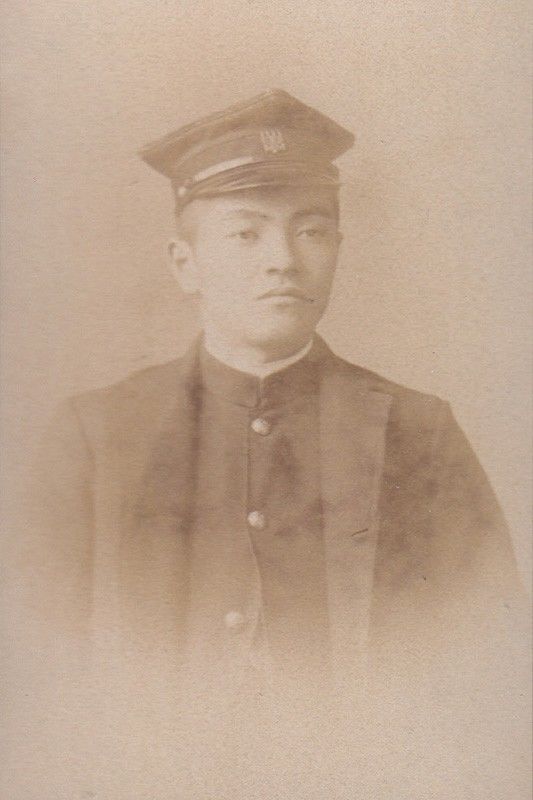 An Imperial University student in uniform in 1906. (Courtesy of author)

The standardizing of the naval-style school uniform was aided further when it was adopted by Imperial University, the forerunner of the University of Tokyo, for its all-male student body in 1886—single-gender education was the norm in Japan up to the end of World War II. At the time only the upper echelon of students continued on to university, and the sight of young men in sharply tailored uniforms was an enviable reminder of their lofty social status. Other top institutes soon followed suit in introducing the formal attire, and the style then spread to junior and senior high schools across Japan.

The rise of the uniforms at all-male schools was part of a broader propagation of Western attire during Japan’s period of rapid modernization, a trend that was driven by the upper class. First adopted by the gentry as a mark of social rank, uniforms broadcast to society the elite status and promising future of the wearer.

Starting around 1900, secondary schools for women similarly embraced uniforms for their student bodies. Instead of Western-style military uniforms, though, the trend was toward hakama, traditional pleated trousers or skirt worn over a kimono.

A drawing from around 1900 showing a female student dressed in a typical maroon hakama. (Courtesy of Ochanomizu University)

Physical education had become an important part of curriculums at girls’ schools in order to promote the health of students. Kimonos were overly restrictive and became untidy during exercise, so students opted for hakama that allowed freer movement while also ensuring, for the purposes of decency, that legs remained adequately covered.

An additional appeal of hakama was its association with the imperial court and Japanese royal family. Many upper-class girls grew up admiring colorful drawings of nobility and members of the imperial line dressed for court in hakama, and the images are thought to have influenced what became the standard design for female students. At first some students imitated the pictures from their childhoods by wearing hakama to class as a fashion statement, while others pressed school heads to make the trousers the official school uniform. As hakama caught on, schoolgirls developed a preference for imported cashmere wool and included accessories like ribbons and parasols, transforming the garments into hybrids of Japanese and Western fashion.

At the start of the Meiji period female students dressed in the same divided hakama as men instead of skirted types typically worn by women. However, this was roundly criticized on moral grounds—the style was strongly linked with the samurai class and some considered the practice tantamount to cross-dressing—and a female version was eventually devised.

Female school uniforms began to change in the 1920s, with Western-style clothing increasingly becoming the norm. Many students at the time enthusiastically welcomed sailor suits, helping establish the look as the standard uniform. The transition from hakama to skirts and jackets, however, created a new dilemma for school administrators. Students wanting to express their individuality pushed the boundary of dress codes by altering hemlines and pleating, setting in motion a game of cat-and-mouse between teachers and pupils that continues today.

The Changing Face of Uniforms

The early history of school uniforms in Japan is an amalgam of school policies and student aspirations and expressions of self. As the nation gradually modernized over subsequent decades, though, enrollment at junior and senior high schools rose and the growth of Japan’s textile industry made Western clothing standard wear throughout society. The result was that uniforms transformed from unique items worn by elite students to symbols of homogeneity that were expected to mask the socioeconomic and class disparities they once represented.

From the late 1960s to early 1970s school uniforms faced a crisis of sorts as members of student movements railed against their use as symbols of an authoritarian education system. As a result, a number of mainly urban schools did away with uniforms, though most institutions kept their dress codes in place. In the late 1980s schools began switching from traditional sailor uniforms to blazers, increasing the diversity of outfits and improving their reputation.

School uniforms come with a myriad of regulations. They are also more expensive than regular clothing. This raises the issue of why schools still use them.

While there is no simple answer to this question, in researching the topic I have found that nostalgia plays an important role. People often tell me they feel compelled to talk with a student wearing the uniform of their old school or that they fiercely oppose changing the original design. For many, they represent the young people they once were and trigger sentimental memories of their school days. Simply put, emotional attachments are why so many people continue to support the use of uniforms.

Not everyone shares such rosy memories of school uniforms, of course, or feels it necessary to subject students to a prescribed dress code. Other issues like the lack of free expression, cost, and growing awareness of the needs of LGBT students also need to be addressed. However, at the start of each school year people willfully push such concerns aside and indulge in sentimental scenes of students in new uniforms taking part in school entrance ceremonies. Perhaps spending years steeped in the culture of school uniforms fosters this contradictory attitude to the outfits. For better or worse, school uniforms remain a deep-rooted part of the Japanese education system.