Keeping the Heart of the Sea

Society Nov 9, 2018
Tokyo’s central fish market has made the move from its storied location at Tsukiji to Toyosu. But what is the city giving up by replacing Tsukiji’s tradition with this new facility? An award-winning writer on global fisheries offers his views on what Tokyo could lose—and what it should strive to keep.

Tokyo, do not rush to cut out your ocean heart as we in New York have cut out ours. Take a moment to pause before you demolish a market with a long and illustrious past. Pause and consider the ocean and the fishermen who harvest its treasures and the difficult future they are facing.

These thoughts drifted up in my mind from a troubled sleep in December 2017, at the end of a week of visiting Tsukiji Market and touring the Tōhoku fishing communities that had been devastated by the 2011 tsunami. They came to me after a decade of looking into the troubled history of fisheries in my own country. And these reflections come to me most recently, urgently, as Tokyo finished the final phases of planning to move Tsukiji, arguably the last great central fish market in the world. My home city of Manhattan has lost both its world class fish market and much of its local fishing fleet. We are poorer because of it. Perhaps a word or two of recollection now might be useful as Japan makes the same mistake. 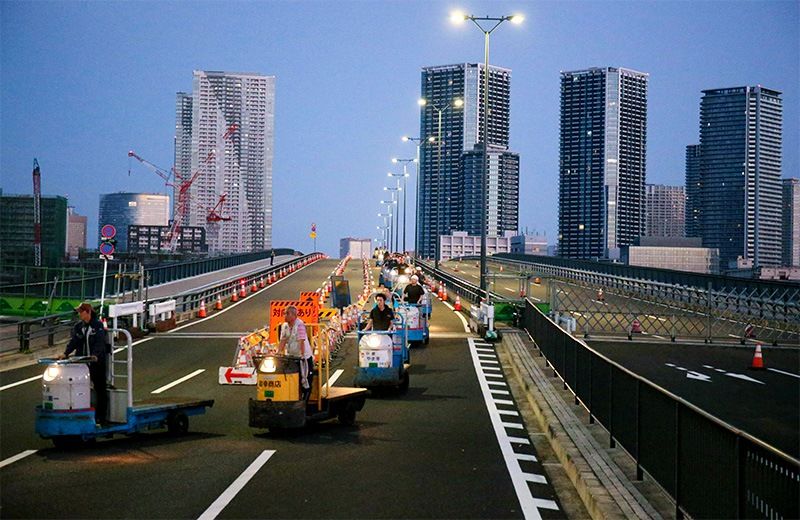 Market workers drive the famed “turret trucks” from the Tsukiji market to the new location in Toyosu in the predawn hours of October 7, 2018. (© Jiji)

A Once-Mighty Market in New York

I first came to know about New York’s version of Tsukiji a little over a decade ago when I moved to the far southern end of the island of Manhattan. On the first morning in my new home I rose early and set out to explore the neighborhood. Just past Water Street the feel of the neighborhood started to change and the ghost of a former incarnation started to reveal itself. Finally I reached a metal warehouse built during the 1930s. Weeping with water stains, it bore a straightforward, working person’s declaration of purpose on its façade:

I had happened upon what had once been a seafood market even more famous than Tsukiji. But in 2005, nobody seemed to care that it still existed. Once upon a time the Fulton Fish Market was the primary point of entry for nearly every piece of seafood New Yorkers ate.

New York’s fishing past is not so distant as one might think. As recently as 1929, an edition of the Fishing Gazette reported that a hundred fishermen were registered to live in “the village” of Brooklyn. In Jamaica Bay, where Kennedy Airport now sits, a “prolific fishing ground for scallops and many terrapin were found along its marshy shores.” Up until the 1920s, enough lobsters and shellfish were taken off Staten Island to satisfy much of New York’s needs. In all, some 100 wholesale fish dealers worked Fulton and sold more than 34 million kilograms of fish a year. 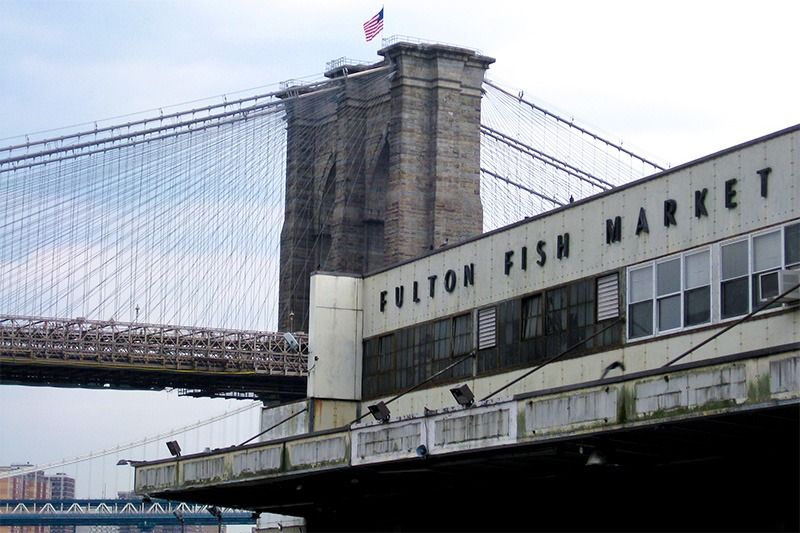 The old Fulton Fish Market, where it stood below the Brooklyn Bridge on Manhattan’s southeast shore. (Courtesy Wally Gobetz)

The End of the Fulton Era

But on the fringes of the market that I found in 2005, another kind of transaction was starting to rule the day. Here and there a few of the old buildings that formerly had housed smokehouses and salters and chandleries were getting a makeover. This was good waterfront real estate with all the classic architecture that make gentrifiers happy. No wonder the city wanted it gone.

In the end, few New Yorkers were upset by Fulton’s departure. It seemed unsurprising that the old, dirty market had been pushed out by white-collar commerce. But looked at more closely, Fulton’s departure can be seen as a sign of a much bigger shift. In fact, it marked the end of a 20-year transition beginning roughly in the early 1980s, during which fish markets and individual fishmongers went from controlling 65% of the seafood trade to holding on to just 11%. Supermarkets, meanwhile, went from selling 16% of our seafood to selling 86%.

Not coincidentally, it was during this same time period that the United States confirmed its status as a seafood debtor nation. In 2005, the year of Fulton’s closure, seafood imports topped 2.3 million metric tons for the first time—double what we had imported two decades earlier. Increasingly, what Americans eat from the sea has less and less to do with their own shores.

Forces at Work Around the World

An American new to Japan is wisely hesitant to draw parallels between New York and Tokyo. But lest my readers in Japan try to deny any similarity between such different cultures, it's important to remember that however much Japan's experience may vary from America's, the forces that moved the Fulton Fish Market are the same that are now moving Tsukiji. Japan, like the United States, has also become a seafood debtor nation. Even though Japan is still one of the most seafood-centric countries in the world, today less than half of what Japan eats from the sea comes from Japanese waters. 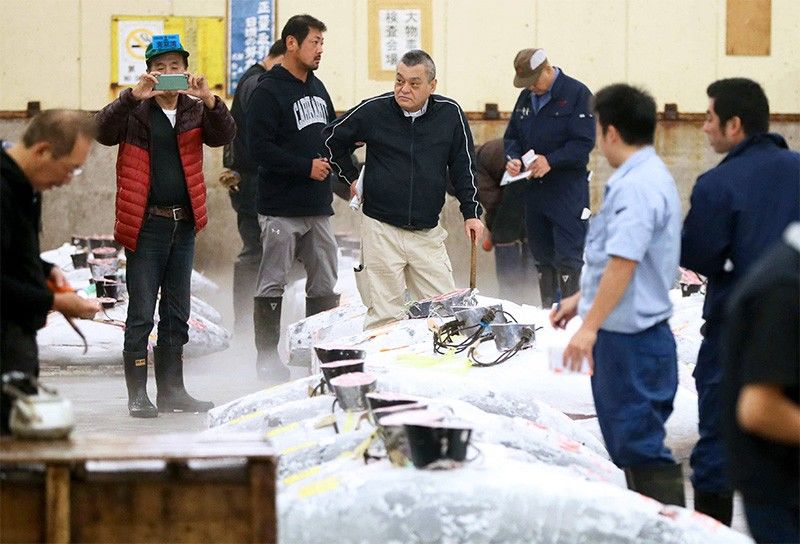 Wholesalers take part in the last tuna auction to take place at the Tsukiji Market on October 6, 2018. (© Jiji)

Meanwhile, the infrastructure around fishing and fisheries conservation in Japan has atrophied. Indeed, the 2011 Tōhoku earthquake and tsunami that destroyed so many Japanese fishing ports merely hastened a process that had begun just after the war. Japan has seen its coastal fishery landings dwindle by the year from over 2 million tons in the mid-1980s to less than 1 million today. Of 84 separate populations of Japanese fish examined by a recent study, 39 were found to be at “low abundance” and another 30 were only at “medium abundance.”

It may seem odd to link the preservation of a fish market that, after all, is responsible for the killing of fish to the long-term health and conservation of fish populations. “The current problem,” the American scholar of French food David Downie writes, “is tied to the proliferation of wholesale food outlets. A generalized decline in the freshness and quality of cooking, especially at the lower end of the market, is occurring.”

When I mentioned these fears to Sakamoto Shinji, a one-time fishmonger in Tokyo, he seemed resistant to the idea that the Tsukiji move could affect the quality of fish on the average Japanese plate. “The higher-end restaurants demand high quality and that will continue even if the market moves,” Sakamoto told me. But is that really the case? Already the way the planners have organized the new market bode poorly for the continuing quality and, more importantly, the continued intimate relationship between consumers and their coasts.

The concentric rings of related commerce that the present-day Tsukiji affords have yet to be adequately taken fully into account. Knife vendors, for example, so far appear to have only a modest representation at Toyosu. It was alarming for me to learn in my trip to Tokyo that, just as in the United States, the average Japanese home cook has lost the knife skills necessary to break down a whole fish into portions that fit with the pace of fish eating through a whole week. More and more, Japanese home cooks rely on industrially portioned fillets that seem entirely cut off from the sea. With the relocation, there will be a separation between associated businesses like knives and the fish they would be used to cut, further distancing consumers from the food preparation skills that were once common in Japan. Who knows what else we might lose if Tsukiji disappears? 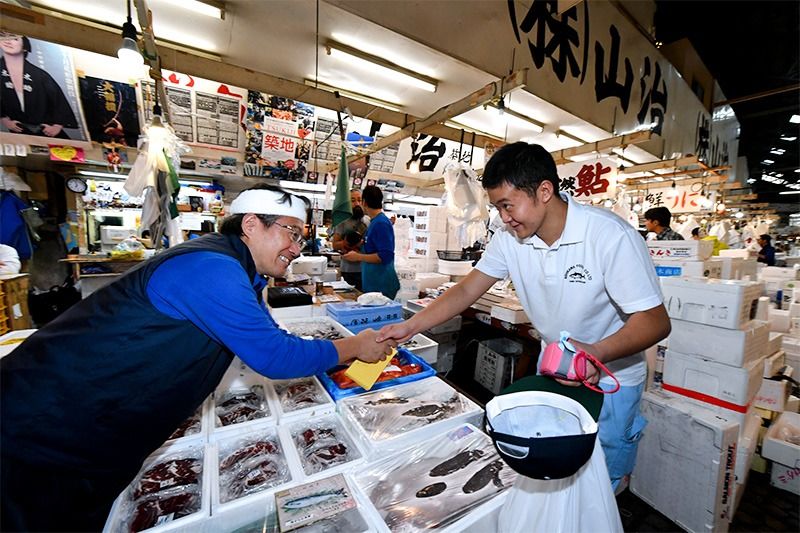 A market wholesaler (left) shakes hands with a seafood purchaser on the last day of operations at Tsukiji. (© Jiji; pool photo)

What Tokyo Needs to Save

What, then, should and could a reimagining of Tsukiji look like? Market sites are special. They arise in certain places as the result of ancient lines of commerce, ties that bring together producers and consumers in uniquely integrated ways. The organic connections between the biosphere that generates our food and the anthrosphere, if you will, that consumes it are irreplaceable. 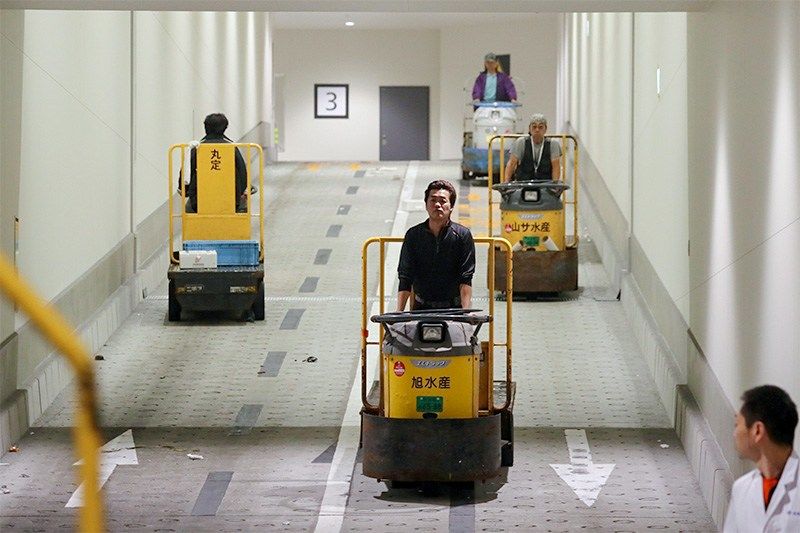 Japan, a nation of designers, planners, architects, and, yes, nature lovers, should take a pause here and consider the genius of its ability to innovate within existing cultural contexts. What if, instead of being leveled, Tsukiji could be reimagined? What if Tsukiji were redesigned so that clearly identified locally caught seafood could have a recognizable pride of place? What if the latest fisheries science was rewarded with prime and visible placement in the market?

We still have time to contemplate the shape of such a future market. After that wrecking ball comes, though, out the window will go the small-scale artisans who know the anatomy and the life cycles of the fish they sell. As more and more large industrial companies come to dominate the new market, gone too will be the intimate relationships, built up over centuries among fishmonger, fish catcher, and the living ocean, that support them both. For the sake of all three, I would encourage creativity with the solutions that you seek. To make a better future, the past shouldn’t be erased.

(Originally written in English. Banner photo: A turret truck delivers goods at the Toyosu Market on October 11, 2018, following the closure of the Tsukiji wholesale facility on October 6. © Jiji.)