Olympus Scandal Exposes the Shortcomings of the Japanese Media

Economy Society Jan 16, 2012
Corporate governance in Japan is coming under new scrutiny after revelations that Olympus Corp. engaged in improper accounting practices for over 20 years. But are companies alone to blame for the lack of corporate transparency? This is the question explored by Yamaguchi Yoshimasa, the economic journalist whose story in the magazine Facta was the first to expose the scandal.

Immediately after the electrifying announcement on October 14, 2011, that Michael Woodford had been fired as president of Olympus Corp., I became the subject of major attention in the Japanese and international media. The coverage came from an article of mine in the August issue of Facta exposing dubious M&A transactions at Olympus. My article prompted Woodford to look into the problem and set off a whirlwind of questions.

Much to my surprise, the Olympus scandal became the top news story for several days in the Western media, including several special breaking news reports. Although the story concerned a Japanese corporation, it was covered more prominently in the overseas media than it was in Japan. And this at a time when Europe was being rocked by the sovereign debt crisis.

Story Shunned by the Big Weeklies

I had hoped that my initial report on the Olympus scandal for Facta would spur the business journals and weekly magazines in Japan to look into the story. The editor-in-chief of Facta, Abe Shigeo, said to me at the time: “Without major media coverage, there’s a risk that this misconduct will go unpunished. You should go ahead and write about it for other publications, too.”

But whenever I pitched the idea, the response was pitiful. Along with my proposals, I made it clear that I had the documents to back up my claims and that the story had the potential to develop into a full-blown corporate scandal. But without exception, my proposals were ignored. In most cases, the magazines did not even bother to return my calls.

Woodford said he was shocked to see that the main Japanese media had no intention of covering the Olympus scandal. Later, Woodford engaged with the Japanese and overseas media in the same way, but I wonder what he was really thinking during those interviews in Japan, given the initial lack of interest. 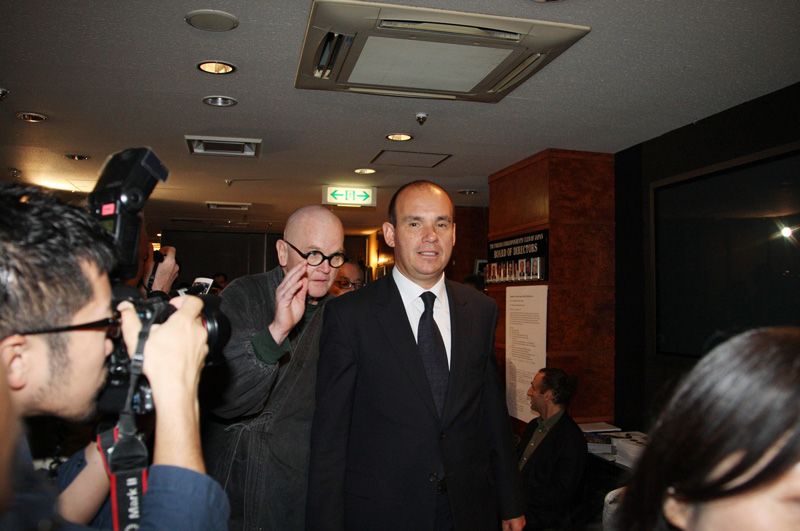 Michael Woodford, former Olympus president, is mobbed by reporters on a visit to Japan after the scandal broke. Woodford made himself available to the media during his visit, but one wonders what he really thought about the initial media blackout of the story in Japan. (Photo: Sankei Shimbun)

Japanese Media and Prosecutors Behind the Curve

Only the editors in question could say for sure why so many magazines rejected my proposals. But the likely reasons are not hard to infer. Unless the story developed into a public scandal as a result of an official investigation by government prosecutors, there was a risk that publications carrying the story might expose themselves to a lawsuit. The fact that Woodford had left Japan after his resignation and was likely to be hard to contact was another factor, as was Olympus’s lavish advertising budget.

As a result, the Japanese media missed the boat. In stark contrast, the British television news company ITN sent a team of reporters to Japan to cover the story. Japanese prosecutors also lagged behind their counterparts in Britain and the United States. The Japanese media were unable to obtain scoops from the government or investigative authorities, normally their main sources of information, and Japanese reporting quickly hit a dead end. By the beginning of November, when the scandal was making the news in Japan, reporters from several of Japan’s major media outlets called me on my cell phone complaining that their reporting was going nowhere and asking if we might make a deal to exchange information.

Solid Journalism Is the Way to Manage Risks

There are risks involved in any line of work, and it is only natural for people to do what they can to reduce those risks. But in the case of the media, honest risk reduction does not mean closing your eyes and refusing to cover controversial stories. Instead, it means covering all the bases in your reporting and making sure you have the facts to stand up to any lawsuit.

If the internal and external board of directors at Olympus and its auditors deserve the brunt of the blame for letting the company’s top management run wild, the Japanese media also deserves censure for making no effort to investigate the scandal and grapple with the issues involved. The media failed to perform its role as watchdog.

My aim here is not to be self-aggrandizing, though. The only reason I was able to write my Facta article in the first place was that I had the good fortune to come into contact with a number of loyal employees inside the company who were prepared to spill the beans on what was going on behind the scenes. Even though none of my sources had met each other, they all spoke of the same desire to make Olympus a better company and expressed the same concern that the company would not survive another decade unless things changed. My sources were individuals with their own ideas and concerns, and they provided me with information without asking for a single yen in return. When I offered to take them out for a meal to express my thanks, they waved aside my offer, saying, “Don’t be silly!”

Of course, my contacts at Olympus were also people who needed to make a living and had families to support. They had serious concerns about whether providing inside information to a journalist would imperil their own positions. There is no doubt that what they were doing made them extremely anxious. One of them sent me a text message in the middle of the night: “When I look at the sleeping faces of my wife and kids I feel more and more worried about the future.”

Today, the discredited board that let things at Olympus get out of control has been driven from the company. This can fairly be described as a victory. But it was a victory due to the efforts of a few determined individuals, not the power of the pen.

The question is whether today’s media can prove itself worthy of such high-minded individuals. And are the frontline reporters themselves driven by the same sort of ideals? The scandal at Olympus has exposed a variety of problems lurking in society today.