Politics Society Jul 3, 2013
As they press their claim to the Senkaku Islands, the Chinese have recently taken to questioning Japan’s sovereignty over Okinawa, formerly the Ryūkyū Kingdom. How do the Okinawans feel about this situation? A veteran local journalist offers a view from Naha.

The confrontation between Japan and China over ownership of the Senkaku Islands (called the Diaoyus by the Chinese) shows no sign of abating. The rhetoric the two countries are directing at each other consists not of constructive words promoting cool thinking but of emotional verbiage fanning the flames of the dispute. Media organs have been playing up these comments, and online postings from the public on blogs and social networks have been getting more heated. This process has been feeding on itself, and the situation is not a favorable one for either country.

A prime example of the perception gap between Japan and China is the emergence in China of arguments that Okinawa does not belong to Japan.

On May 8 the People’s Daily, an organ of the Communist Party of China, published an article that declared, “It may be time to revisit the unresolved historical issue of the Ryūkyū Islands.” (Note: The Ryūkyū Islands, of which the island of Okinawa is the largest, make up Japan’s Okinawa Prefecture.) And the Global Times, an affiliate of the People’s Daily, followed up on May 10 with an editorial declaring, “If Japan seeks to be a pioneer in sabotaging China's rise, China can carry out practical input, fostering forces in Okinawa that seek the restoration of the independence of the Ryukyu Chain.”

Also, in an editorial on May 10, Wen Wei Po, a pro-Beijing Hong Kong daily, asserted, “The Ryūkyūs were China’s territory from long ago; Japan stole them and the Diaoyu Islands [Senkaku Islands] by military force and under US protection.” And the March 16 issue of Shijie Zhishi, a journal affiliated with the Chinese Ministry of Foreign Affairs, carried an article asserting that Japan does not have legal sovereignty over Okinawa.

It is said that articles of this sort questioning the status of Okinawa have increased in number since the Japanese government “nationalized” the Senkaku Islands in September 2012. Discussions of sovereignty and ownership of Okinawa have been taking place unbeknownst to the Okinawans themselves, and provocative calls to “take Okinawa back” are reportedly popping up online.

What the People of Okinawa Seek

On May 15 this year, the forty-first anniversary of Okinawa Prefecture’s reversion from American administration to Japanese rule, a group of Okinawan scholars established an association to study the issue of independence for the “Ryūkyū nation.” This move reflects the frustration felt by people in Okinawa at the failure of the central government to consider their wishes regarding the US bases in the prefecture. But if the Chinese, looking at developments of this sort within Okinawa, truly believe that they should encourage forces seeking the restoration of Ryūkyū independence, they are pursuing a dangerous line of anachronistic thinking.

In his book Ryūkyū/Okinawa-shi no sekai (The World of Ryūkyū/Okinawa History), Professor Tomiyama Kazuyuki of the University of the Ryūkyūs has pointed out that in early modern times the Ryūkyū Kingdom had dual allegiances: a relatively unrestrictive tributary relationship with China (under the Ming and Qing dynasties) and a strongly subsidiary relationship with Japan’s Satsuma Domain.

Since early modern times Ryūkyū/Okinawa has experienced a number of regime changes. It is true that on each such occasion there has been some internal disagreement over the islands’ affiliation. When the Ryūkyū Kingdom was abolished and Okinawa Prefecture established in its place in 1879 (the “Ryūkyū Disposition”), some members of the local warrior class opposed to the move sought support from Qing China. And for a while after the end of the Battle of Okinawa in 1945, there were voices calling for the islands to become independent or to be made a US trust territory rather than revert to Japan. There was also some opposition to reversion when it was carried out in 1972.

But a consistent thread has run through the thinking of the Okinawan people during the entire course of their modern history. Okinawans have considered how to secure their autonomy while being caught between major powers. They long to govern themselves, achieve economic independence, and live in peace while treasuring their distinctive culture. These sentiments remain unchanged to this day.

The Sudden Deterioration of Feelings Toward China

In November and December 2012, a division of Okinawa’s Executive Office of the Governor conducted a survey of sentiment toward China among people of the prefecture, sampling the views of 3,000 people, male and female, aged 15–74. The results are excerpted as an appendix at the end of this article. (I should point out that the survey was conducted after large-scale anti-Japanese demonstrations had broken out across China in response to the Japanese government’s decision to nationalize the Senkakus.) 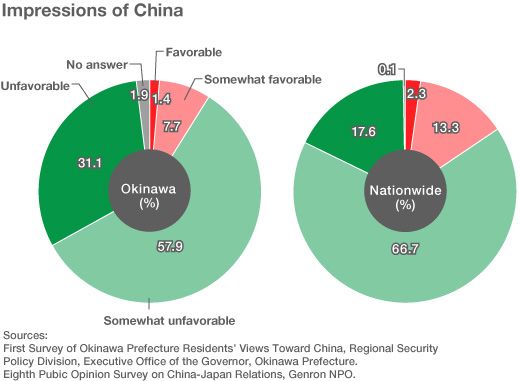 In a multiple-response question concerning major impediments to the improvement of relations between Japan and China, the most frequently cited items were “territorial issues,” “China’s anti-Japanese education,” and “the Chinese people’s nationalism and anti-Japanese sentiment.”

Okinawa has historically deep ties with China, and it has been said that most of its people have friendly feelings toward that country. But the results of this survey make it clear that Okinawans’ sentiments toward China have deteriorated sharply. And the campaign that has emerged this year in the Chinese media to make an issue of Okinawa’s ownership has surely further heightened their feelings of concern and mistrust.

The Peace-Seeking Realism of People Living on a Borderline

Despite the deep degree of economic interdependence that has developed between Japan and China, the two countries suffer from highly visible perception gaps in a number of areas. The recent Okinawan view of China is apparent from what I have noted above. And the view of Japan from the Chinese side is doubtless even harsher. How can we achieve better understanding of each other’s positions? Xenophobic nationalism that fans the flames of discord accomplishes nothing; it only makes the problems harder to solve.

Most of the people of Okinawa oppose the idea of turning their islands into a fortified linchpin in a cordon around China (though some feel otherwise). This is the “peace-seeking realism” of people living on a borderline.

In the closing months of World War II, Okinawa became the site of a fierce battle between US and Japanese forces, and after the war it was placed under US rule and turned into a “Pacific bulwark” against the Soviet Union and China. Given its harsh historical experiences, Okinawa should now seek to serve as a forum for Japan-China dialogue and as the starting point for a wave of détente in the troubled bilateral relationship.

The following are excerpts from the results of the first Survey of Okinawa Prefecture Residents’ Views Toward China, conducted by the Regional Security Policy Division, Executive Office of the Governor, Okinawa Prefecture, from November 21 through December 12, 2012. The survey was directed at a sample of 3,000 Okinawa Prefecture residents, male and female, aged 15–74, with valid replies received from 1,187 people (39.6% of the sample). The nationwide figures are from a survey conducted by the Genron NPO from April 26 through May 14, 2012, directed at males and females aged 18 or over (excluding high school students), with valid replies received from 1,000 people.

(1) Impressions of China
What sort of impression do you have of China? (single answer)

To those who replied “favorable” or “somewhat favorable” to the above question:
What are the reasons for your favorable impression? (check all that apply)

To those who replied “unfavorable” or “somewhat unfavorable” to the above question:
What are the reasons for your unfavorable impression? (multiple answers)