Society Culture Sep 12, 2013
NHK’s latest “TV novel” has become a phenomenal success. These dramas and their heroines have been familiar faces in Japanese living rooms for more than half a century. A TV journalist looks back at a few of the best-remembered examples, examining how they have changed and why they are so popular.

Ama-chan (Little Diver), a morning drama shown in short daily installments on the public broadcasting station NHK, is the latest nationwide hit. Set in the Tōhoku region of northeast Honshū that bore the brunt of devastation in the March 2011 tsunami disaster, the upbeat drama is shot through with moments of comedy. The series has given rise to several books and a successful soundtrack, and the dialect term jejeje (meaning “what?” in the Iwate dialect) has become a popular catchphrase.

The storyline, which involves a young woman with dreams of becoming a pop star and includes a number of scenes parodying the Japanese entertainment industry of the 1980s, is perfect fodder for otaku super-fans, who have turned Ama-chan into one of the hot topics on Japanese Internet chat sites.

I have already written about the appeal of Ama-chan a number of times in other magazines. Here I want to step back and look at the phenomenon from a wider perspective. Let’s start by looking at the history of the NHK “morning drama” itself. 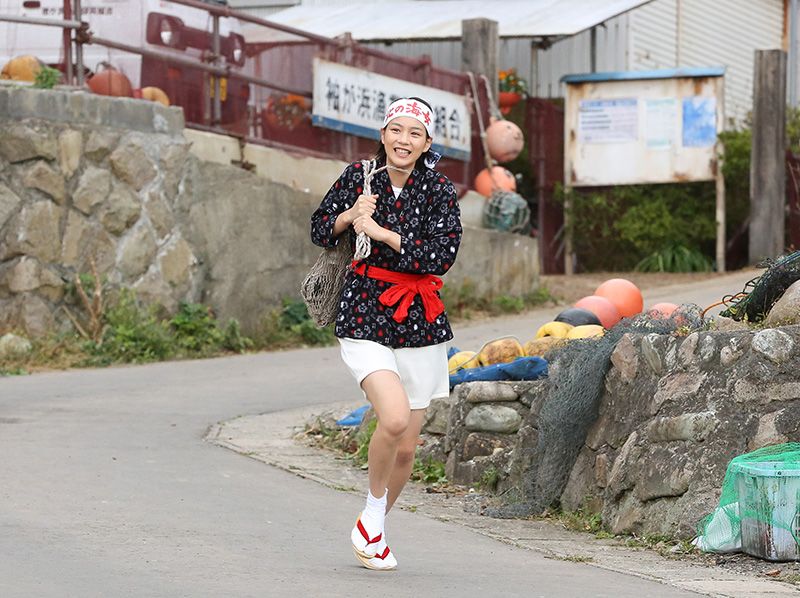 Nōnen Rena, who plays Aki, the main character in Ama-chan. Raised in Tokyo, the shy Aki comes to a rural town in Iwate Prefecture with her mother and trains to become a female diver (ama) like her grandmother. She becomes the darling of the town before returning to Tokyo, where she battles to succeed on a bigger stage. (Broadcast on NHK General at 8:00–8:15 am, Monday to Saturday, and other times. Photo courtesy of NHK.)

Time to Go to Work: The Popular Shows That Kept Time for a Nation

The morning drama—or what NHK officially calls its “serial televised novel” slot, began in 1961. The first drama was Musume to watashi (My Daughter and I), based on a novel by Shishi Bunroku. This went out for 20 minutes a day from 8:40 to 9:00 am, five days a week. The entire broadcast lasted approximately one year.

From the outset, the time was displayed on the screen so that people could keep an eye on the time as they watched the day’s installment. It seems likely that this custom originated with the radio. Radio dramas used to be broadcast twice a day, in the morning and evening. I remember listening to them with my family as a child. During the broadcast, there would be regular announcements of the latest time, down to the minute.

The new morning dramas apparently enjoyed high ratings from the start. The first person to become a star through the new format was Hayashi Michiko in Uzushio (Whirlpool, 1964). I was in second grade at the time, and still have vague memories of sitting down to watch this dramatization of the life of the female novelist Hayashi Fumiko before setting out to school each morning. Hayashi Michiko was a very smooth presence in front of the camera, and was chosen to host the annual New Year’s Eve Kōhaku uta gassen (Red and White Song Contest) the following year—perhaps the ultimate accolade in Japanese TV.

Ohanahan, the Drama that Defined an Era

But the big breakthrough for the new style of drama came in 1966, when Ohanahan (Miss Ohana) became a national phenomenon. I remember that my fourth-grade teacher was absolutely hooked on the show, and used to watch the afternoon rebroadcast in the classroom during lunch break. The heartwarmingly nostalgic theme tune returned to prominence all over again a few years ago when it was used in the ubiquitous “talking dog” commercials for Softbank, a mobile phone provider. A version of the tune set to lyrics was also a major hit, and was performed by Baishō Chieko at that year’s Kōhaku uta gassen. But more than anything else, this was the series that made a national idol of Kashiyama Fumie, the young actress who played the part of the adorable heroine. 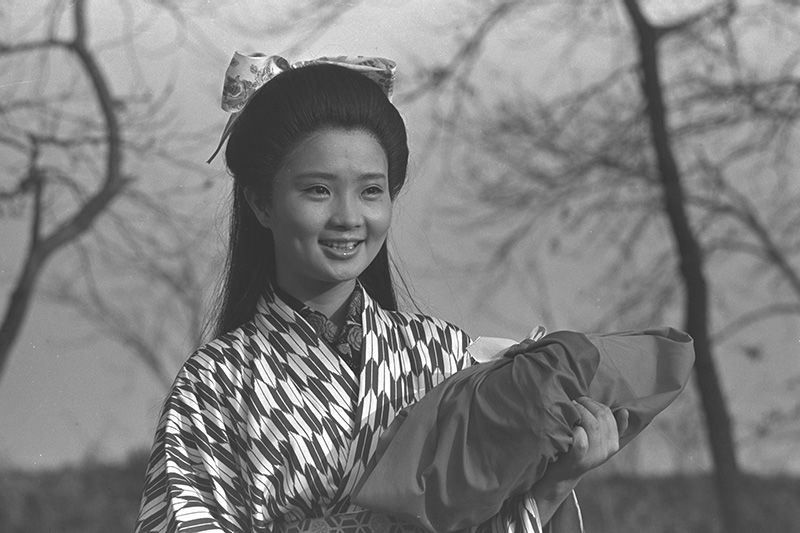 Kashiyama Fumie in Ohanahan (broadcast in 1966). The main character, Hana, lives through the major events of modern Japanese history, never losing her cheerful outlook on life despite a string of tragedies, including the loss of her army officer husband in the war. (Photo courtesy of NHK.)

It would be no exaggeration to say that Ohanahan took the nation by storm. An article from a contemporary TV Guide gives a suggestion of just how popular it was:

A whole nation stopped what it was doing to follow with the drama. In this sense, Ohanahan was perhaps the TV equivalent of the NHK radio drama Kimi no na wa (What’s Your Name?), which aired between 1952 and 1954. This show’s popularity became legendary. It was said that public baths, shops, and markets throughout the country became empty of people whenever the show was on air, as the nation’s women hurried home to listen to the latest episode. It is hard to imagine any television drama uniting people to quite that extent today, despite the remarkable success of Ama-chan.

The Gateway to National Stardom

Takahashi Kōji, who played Kashiyama’s ill-fated husband, also became a huge star. The producers were deluged by letters from fans begging them not to let the character get killed in the war.

Ohanahan is the life story of a woman who lives through a long period of modern Japanese history. Many morning dramas take this approach, depicting the ups and downs of a character’s life over a period of years. Many of Japan’s well-known actresses first made their name on morning dramas. Over the years, these have included Ōtake Shinobu in Mizuiro no toki (Light Blue Time, 1975), Matsushima Nanako in Himawari (Sunflower, 1996), and Takeuchi Yūko in Asuka (1999). The morning dramas continue to be an important gateway to success for young actresses.

A Strong Focus on Young Women as Main Characters

From 1979 to 1981, I worked as a reporter covering NHK for the weekly Shūkan TV gaido. Looking back now, I am struck by how many of the titles from those days contain the suffix –chan, a term of endearment, usually reserved for women and children. Mā nē-chan (My Big Sister Mā, 1979), Natchan no shashinkan (Natchan’s Photo Studio, 1980), Otei-chan (1978), Chotchan (1987), Non-chan no yume (Non-chan’s Dream, 1988), Jun-chan no ōenka (Three Cheers for Jun-chan, 1988) . . . and now Ama-chan. The author Kudō Kankurō may have intended his title as an affectionate parody or homage to these earlier hits of the genre. The series joins a long line of dramas based on steadfastly cheerful young heroines—the use of –chan in the title situates the latest hit firmly in the mainstream of postwar Japanese entertainment history.

The Biggest Hit of All

But it was Oshin (1983) that became the most popular morning drama of all, despite the absence of the words –chan or –san from its title. In many ways one of the most endearing of all morning dramas, this series, based on an original script by Hashida Sugako, was broadcast for a year at a time when six-month series were the norm. At its peak, it attracted more than 60% of the total audience. This was an impressive achievement indeed at a time when video recorders were already becoming widespread. The show propelled child actress Kobayashi Ayako, who played the young Oshin, to the status of national celebrity. Tanaka Yūko, who played Oshin as a young adult, broke through to the big time on the back of her excellent performances in this drama. 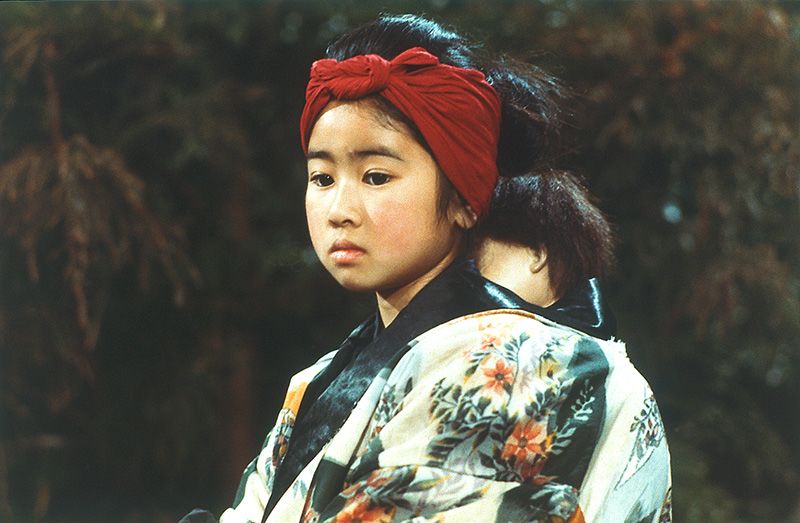 Kobayashi Ayako as the young heroine in Oshin (broadcast in 1983). Oshin is born into rural poverty and is sent out to work at the age of seven. After many hardships, she eventually finds success as the manager of her own business. (Photo courtesy of NHK)

This was the beginning of the bubble economy–a period generally remembered for glitz, excess, and ostentatious consumption. It is perhaps ironic that this humble story of hard work and poverty, set more than 50 years in the past, should have become so popular at such a time. In fact, I think this may have been part of the reason for the show’s popularity. Oshin probably represented something of a backlash or counterbalance to the materialism of the 1980s—like a bracing green salad served to balance out the rich sauces of a heavy main course.

The days when the morning dramas were an indispensable part of almost everyone’s life have long gone. No longer can it be said that Japan sets its watch by the morning drama. Ratings are now generally stable at around 20%. Even so, there is still an audience for these shows—and there are signs that the dramas’ appeal is actually increasing in recent years. Perhaps people are growing tired of the same old lineup of familiar faces on the tabloid news shows and panel discussions that make up most commercial stations’ offerings. Another factor may be the length: What could be better suited to the limited attention spans of today’s channel-surfing audiences than a drama that can be watched in daily installments of just fifteen minutes each?