Economy Society Culture Nov 6, 2013
The Japanese newspaper business today seems cheerfully immune to the forces that have forced so many US publications into bankruptcies and buyouts in recent years. How has it maintained a firm footing in the age of digital media? And how long can this good fortune last? University of Tokyo professor Hayashi Kaori explores the unique economic and cultural underpinnings of the Japanese newspaper industry and their implications for the future.

Last August the world’s media were abuzz with the news that the venerable Washington Post was about to be sold to Amazon.com founder and CEO Jeff Bezos. It was the latest installment in a story of upheaval that has forced such American institutions as the Wall Street Journal (taken over by media mogul Rupert Murdoch’s News Corp. in 2007), the Los Angeles Times, the Star Tribune, and the Philadelphia Inquirer into bankruptcies, mergers, and acquisitions.

In Japan, by contrast, one rarely hears of bankruptcies or buyouts in the newspaper industry. Are Japanese newspapers somehow immune to the trends that are shaking up the print media overseas? In the following I examine some of the characteristics of Japan’s newspaper business and contemplate the industry’s long-term outlook in the digital age.

One obvious indicator of an industry’s health is revenue. In Japan, total newspaper revenue has declined over the past 15 years (see Figure 1), albeit not as steeply as in the United States and Europe. By 2011, industry revenue had dropped by more than 20% from its peak of ¥2.53 trillion, recorded in 1997. 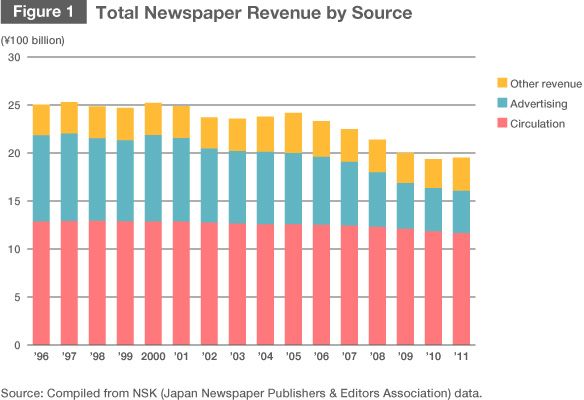 Newspaper circulation figures remain remarkably high in Japan. Among the major national papers, the Yomiuri Shimbun—Japan’s largest—puts its circulation at slightly less than 10 million. The number two Asahi Shimbun has an official circulation just shy of 8 million. Japan’s regional newspapers typically reach 50% of households in their market, and a fair number boast a penetration rate of 60% or higher. Moreover, Japanese regional papers are almost all independently operated—unlike their US counterparts, which are mostly owned by nationwide newspaper chains like McClatchy.

In short, although advertising revenue has declined as a result of the economic situation, Japanese newspapers have remained relatively strong for the simple reason that readers are not canceling their subscriptions.

What explains this loyalty? The chief reason is that for most Japanese adults over a certain age, newspapers not merely an information medium but an integral part of their lifestyle. If you are an adult in Japan, chances are that one of the first things you do after getting up in the morning is to go to your mailbox and collect your morning paper. Later, when the evening newspaper arrives, you scan the headlines to catch up on the day’s events (although growing numbers of regional newspapers have suspended their evening editions).

To some extent, this behavior reflects the Japanese fondness for printed reading matter of all kinds. But from a practical standpoint, what has made it possible is the newspapers’ extensive home-delivery network, which penetrates every corner of the archipelago.

Close to 20,000 local distributors form the hubs of this network. Most of the distributors have exclusive contracts with a particular newspaper publisher and work in close cooperation with its sales department to sell and deliver its newspapers as efficiently as possible. They have worked long and hard to carve out their territory and secure as many subscribers as possible. They are able to augment their earnings by folding advertising inserts into the newspapers prior to delivery. This system has created a vast nationwide home-delivery network that accounts for a full 95% of Japanese newspapers sold. Even in Germany, which has a market close to Japan’s in size and a well-developed delivery system, the percentage of papers delivered door-to-door is only 70%.

Part of the Community

In Japan, personal and community relationships are the key factors that determine subscriber loyalty. Japanese newspapers have little of the ideological coloring that characterizes certain European newspapers, which began as party publications. Japanese readers remain loyal to one newspaper or another simply because their family has always subscribed to that newspaper, or because they happen to know the neighborhood distributor.

In Japan, newspapers have always been more than a news medium. The “paperboy,” for example, occupied a prominent place in Japanese urban society in the years of rapid growth following World War II. Many of the young people who thronged to the cities to pursue higher education actually boarded at neighborhood distribution outlets as they supported themselves by delivering newspapers. A good number of them also received generous scholarships. The newspapers’ role as benefactors to thousands of struggling young migrants is presumably part of the reason for their popularity among Japanese aged 50 and older (particularly those who migrated to the city from the country when they were young).

Newspaper delivery is no longer a popular option among college students looking to earn their school tuitions and livings. In fact, the number of people working at delivery stations has plummeted by about 75% in the past 20 years. However, newspaper distributors have found other ways of cementing their position in the neighborhood. In the rapidly aging communities of Japan’s depopulated rural regions, many have adapted their business model to their elderly clientele, offering wheelchair rental or home visits to check on people living alone. Since the immediate postwar years, newspapers have secured the loyalty of an “ironclad readership” by contributing to the local community with services that filled the gaps left by local and central government.

These are some of the reasons Japanese newspapers are so firmly embedded in Japanese life and culture.

No Turning Back for “Digital Natives”

Notwithstanding the loyal readership and financial stability enjoyed by Japanese newspapers today, it is hard to be optimistic about their future prospects. In fact, the industry’s current ability to coast along on the strength of its former success makes it all the more difficult to envision a happy outcome farther down the road.

The nature of the threat is no great mystery. In Japan, as in the industrially advanced nations of the West, new subscriptions have fallen with the spread of the Internet and smart-phone technology. Students at the university where I teach seldom subscribe to newspapers, particularly if they are living on their own. Young people are prepared to pay considerable sums for their cell phone subscriptions, but they are reluctant to spend even a fraction of that amount on newspapers.

Figure 2 depicts this trend in stark statistical terms, using data from a time-use survey conducted in 2005 and 2010 by the NHK Broadcasting Culture Research Institute. In 2010, men in their twenties reported spending four minutes per day with a print newspaper on average, as compared with 68 minutes online. The conventional wisdom has always been that men begin reading newspapers in earnest once they have settled down as mature adults with steady jobs. But even in Japan, this pattern appears to be breaking down. It seems highly unlikely that today’s “digital natives”—young people in their teens and twenties who grew up with digital technology—will return to print media as they grow older. 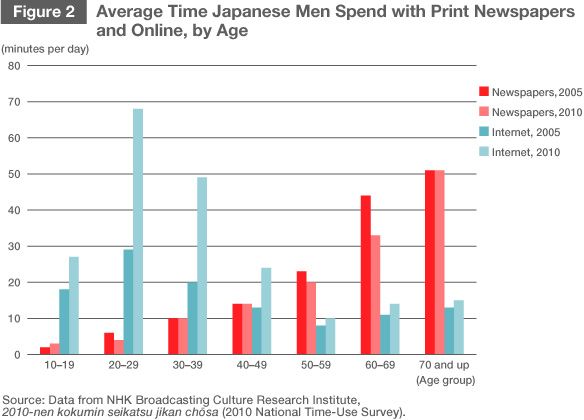 Victims of Their Own Success

Japanese newspaper publishers have adopted a variety of strategies to attract younger readers, but these all fail to address the basic problem head-on. Standing atop their vast paper empire, built with the aid of thousands of local distributors, newspaper executives seem incapable of doing anything more than watch in concern as the shift to digital media threatens to leave them in the dust.

In the course of my research, I have carried out interviews with many Japanese newspaper executives regarding their business strategy for digitization. Virtually all of them expressed the same concern—that any major shift toward paid digital content would trigger a backlash from the local distributors that support the home-delivery network. “We can’t ignore the distributors,” they explained.

This is why the Yomiuri, Japan’s largest daily newspaper, makes its paid digital edition, Yomiuri Premium, available only to print subscribers. Similarly, the Asahi Shimbun and the Nihon Keizai Shimbun hype their print-plus-digital packages but discourage digital-only subscriptions by pricing them almost as high as print subscriptions. Most regional newspapers, meanwhile, have balked at publishing a digital edition. Their websites carry only free content in the form of “article teasers” designed to spark interest in the print edition.

Japan’s newspaper business is a prime example of a successful domestic-demand-driven industry that skillfully tapped into the consumer base at a time when it was growing rapidly. But Japanese newspapers have remained wedded to the same old business model in a dramatically changing world—even while bankruptcies and buyouts have catalyzed the restructuring and renewal of the newspaper industry abroad.

When will renewal come to Japan’s newspaper industry? How will newspapers sustain and develop demand 40 or 50 years from now, in a society of digital natives? Trapped in their own twentieth-century formula for success, Japanese newspapers have yet to formulate a clear vision for the twenty-first.