Society Culture Dec 19, 2013
In early September, the legendary animator Miyazaki Hayao announced his retirement as feature filmmaker for Studio Ghibli. This news story, which was covered globally, raises questions about the future direction of Japanese animation. Industry veteran Yamaguchi Yasuo takes a look at the state of Japanese animation at this major turning point and ponders its future.

The Wind Rises, director Miyazaki Hayao’s new animated film from Studio Ghibli, made its Japanese debut in July, 2013, and by September 11 it had already grossed ¥10 billion at the domestic box office. Just a few days earlier, on September 6, Miyazaki had announced his retirement at a jam-packed press conference attended by 600 journalists from Japan and 13 countries. This intense media interest was unprecedented for the retirement of an animated film director, reflecting the tremendous interest around the world in Miyazaki’s oeuvre. 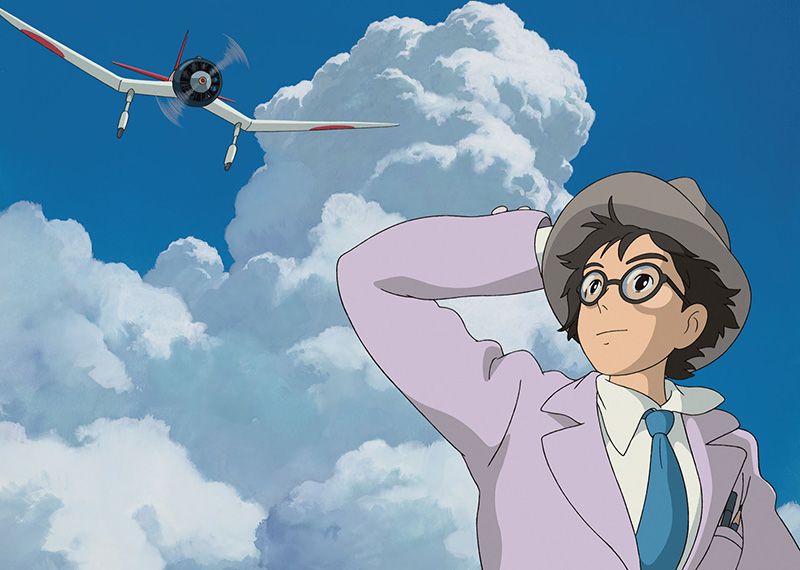 The Wind Rises depicts the tumultuous period of Japanese history leading up to World War II, and revolves around a character modeled after Horikoshi Jirō, the aeronautic engineer who designed the Mitsubishi A6M Zero fighter (image: © 2013 Nibariki/GNDHDDTK). 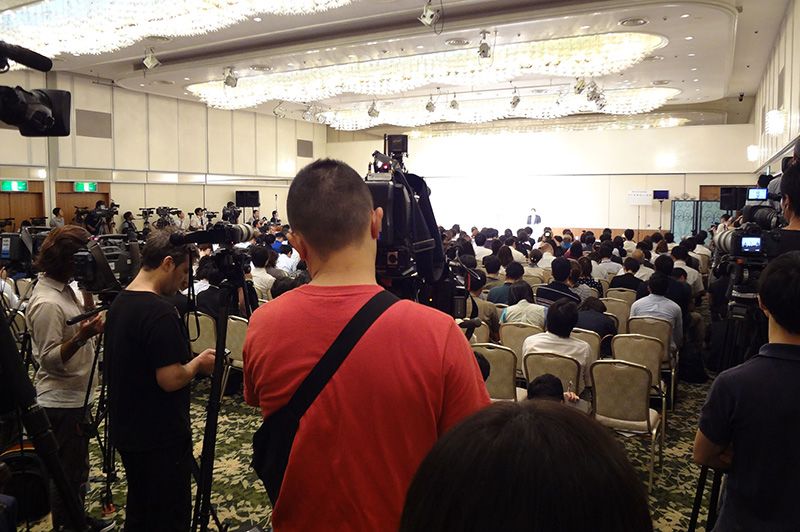 More than 600 journalists from around the world attended the press conference announcing Miyazaki Hayao’s retirement (photograph courtesy of Studio Ghibli).

Films directed by Miyazaki (and produced by Suzuki Toshio) have been topping Japan’s annual box-office rankings ever since 1985, when Studio Ghibli was founded. Moreover, the popularity of these animated films has extended to the rest of the world, a feat that has eluded other Japanese films for the most part.

An Era Comes to an End

That early September press conference was not the first time for Miyazaki to declare his intention to retire from directing feature-length animated films, but this time he seems quite unlikely to change his mind. There was a hint of relief in Miyazaki’s eyes as he declared his retirement to the journalists on hand. Seated next to him was his producer, Suzuki, who had an uncharacteristically docile look on his face, offering no sign that Miyazaki’s departure might threaten the future of Studio Ghibli.

In the Japanese movie business, ¥5 billion in box-office revenue is considered the cut-off point for a hit, and anything over ¥10 billion is a blockbuster that can send the media into a frenzy. Since Miyazaki has scored one blockbuster after another there has always been intense media speculation about his next project. This may be the reason why Studio Ghibli felt obliged to hold a press conference to make an official announcement that Miyazaki would not be making any new films. My own expectation had been that the press conference would coincide with the announcement of the next slated project for Ghibli. But apart from announcing a new film scheduled for release in the summer of 2014, the September press conference offered no other details on projects in the works.

Meanwhile, there has been speculation that Miyazaki’s colleague Takahata Isao, Ghibli’s other legendary director, is also nearing retirement. The Tale of Princess Kaguya, the film released in Japan on November 23 by the 78-year-old director, may be his swan song. Whatever the case may be, there is no question that the creative system headed by these two great directors under the stalwart stewardship of Suzuki is nearing its end. 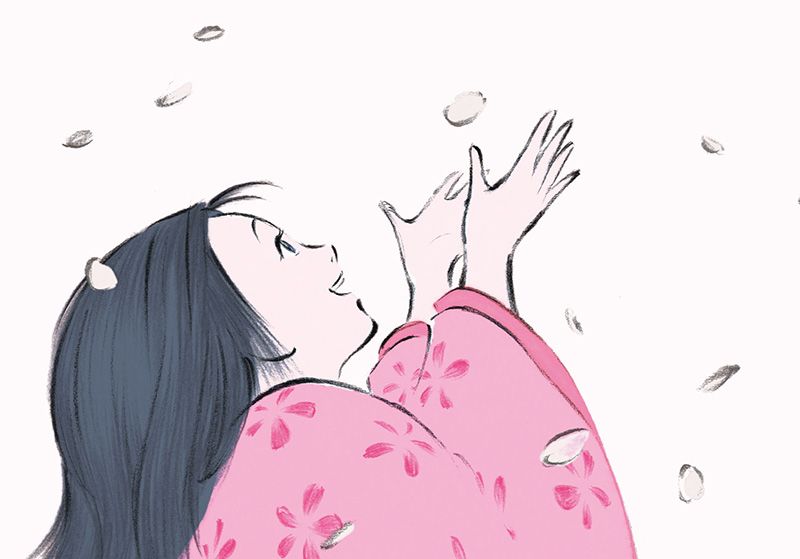 The Tale of Princess Kaguya, the latest film from 78-year-old director Takahata Isao, could be his last (image: © 2013 Hata Office/GNDHDDTK).

Setting aside Ghibli for the moment, which is in a league of its own, how is the Japanese animation industry faring as a whole? Although animated TV series have been in the doldrums lately, feature film adaptations of enduringly popular animated TV series have been enjoying success, increasingly appearing in the box-office top-10 lists. In addition to such prominent examples as Pokemon (Pocket Monsters), Doraemon, Crayon Shin-chan, Neon Genesis Evangelion, Detective Conan, Naruto, and Pretty Cure, original works from Ghibli, director Hosoda Mamoru, and others are also making their mark.

Many of these films, by the way, are the creations of “production committees,” comprised of television networks, advertising agencies, publishing companies, music publishers, and other businesses that come together to provide the funding. Under this system, any profit generated by the film produced is divided among the committee’s members according to their investment share. Following the revision of Japan’s Trust Act, production committees are also allowed to hold the copyright to a film as their joint intellectual property.

Television networks and advertising agencies often take the central managerial role in a production committee, whereas production companies tend to wield little clout. In some cases the firms that make the actual movie become subcontractors to the production committee; this raises concerns about the risk of “subcontractor bullying,” which is a violation of the “abuse of dominant bargaining position” clause in Japan’s Antimonopoly Act. Many believe that a legal framework for production committees should be devised as soon as possible.

Some Exceptions to the Rule

Production budgets for animated television series are said to be too limited, but one exception is the profitable series Sazae-san. The show has enjoyed unwavering popularity ever since its first broadcast in 1969, and is apparently used as a model for teaching foreign students the sort of genuine conversational Japanese used at home among family members. Sazae-san is made by the production house Eiken, which earns no ancillary income whatsoever from the show, whether from overseas sales or merchandizing involving character rights sales, branding, or toy production.

Another exception is Studio Ghibli. It only produces films for theatrical distribution, and all of its films are basically original works. The Ghibli films have all generated outstanding box-office returns and turned a profit. This success story is in stark contrast to the performance of Tōei Animation, a studio that racked up huge losses until the 1960s as one feature film after another bombed at the box office.

Other animation production companies have viewed feature films as a sideline to their television work, but Ghibli became one of the world’s top animation studios through a sound business model centered on theatrical distribution followed by a DVD release the following year and the sale of TV broadcast rights. By following this anomalous approach, Ghibli has stretched out such a commanding lead over its rivals that it does not even need to look over its shoulder to see how far behind they are.

Along with the recent success of animated feature films, several promising new directors have emerged. But it is a long-shot that any of these directors might be able to churn out a string of films grossing between ¥5 billion and ¥10 billion. Is the key to success the adaption of popular comics, or should the focus be on original director-driven works? The world’s attention, for now, seems to be directed toward the future path of the established brand Ghibli—as evidenced by the tremendous interest in Miyazaki’s recent retirement announcement.

Given that interest in the press conference, as well as the fact that it brought together Ghibli’s head honcho Suzuki, president Hoshino Kōji, and Miyazaki for a rare public appearance, it seems to me that it would have been the perfect opportunity to convey their thoughts on the future direction for Studio Ghibli. That is certainly what people in Japan and all around the world wanted to hear.

As for the rest of the animation industry in Japan, the production systems these days tend to rely heavily on subcontracting work to China, South Korea, the Philippines, and elsewhere. This has led to a rapid improvement in the level of talent among animators in those countries. But the creators hired are not willing to remain subcontractors forever. Already, they are working to develop their own original works and to collaborate on a more equal footing with their counterparts in Japan.

One can envisage a diverse range of possibilities for the near future, such as co-productions funded through joint investment between Japan and overseas parties, and the development of animated television series that could be broadcast in multiple countries. Much of the talk surrounding Japanese animation domestically has focused on content with strong export potential, but more consideration needs to be given to adopting a collaborative approach.