Bound by the Web: Internet Addiction in Japan

Society Culture Dec 9, 2013
The Ministry of Health, Labor, and Welfare estimates that as many as 518,000 junior high and high school students across the country may be addicted to the Internet. Using data from various surveys of social media use, Professor Hashimoto Yoshiaki of the University of Tokyo examines the background to Internet addiction and looks at what can be done about it.

How Many Youngsters Are at Risk of Internet Addiction?

Internet addiction has become a major social problem in the United States, Korea, and other countries. And now the same thing is happening in Japan as well. The tendency toward Internet addiction is increasing in particular among younger age groups, as a result of the increased popularity of smartphones.

During February 2013, my research team—together with the Institute for Information and Communications Policy, in the Ministry of Internal Affairs and Communications—carried out an online survey of Internet habits. A total of 2,605 people took part, from elementary school students to working adults up to 25 years of age. The survey was based on the 20-item diagnostic standard for Internet addiction developed by specialist Dr. Kimberly Young. Analysis of the results revealed that a considerable percentage of people are at high risk of Internet addiction: 2.3% of elementary school students, 7.6% of junior high school students, 9.2% of senior high school students, 6.1% of university students, and 6.2% of working adults.

We also found that the risk of addiction is higher for those who use smartphones (6.9%) than those who do not (5.8%); this difference was found to be statistically significant. The addiction rate varies widely according to the criteria used and the sample of the population surveyed, so the figures themselves are of course not set in stone. Nevertheless, the finding that there is a higher addiction rate among smartphone users is significant. 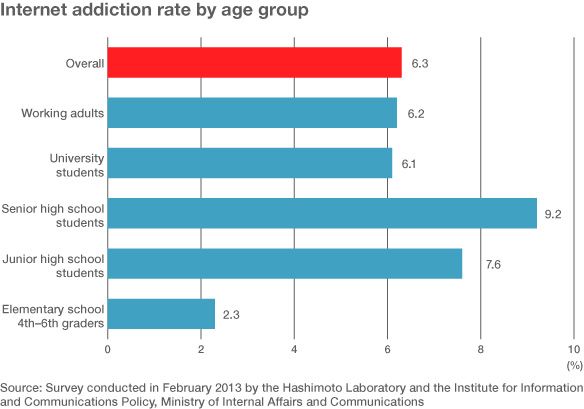 In Japan, bonding addiction appears to be common among young people—at any rate, this is what the results of several surveys suggest. In the 2013 survey cited above, addicts spend an average 36.6 minutes per day looking at social media, and a further 28.4 minutes writing posts of their own. Analysis of the relationship between various Internet services and the degree of addiction suggests a strong link between social media use and the risk of addiction.

In October 2012, I carried out a joint survey with the Institute for Information and Communications Policy. Of our pool of 1,500 people, we found that 41.4% made some use of social media; among people in their twenties, the figure was 81.8%.

People have different reasons for becoming immersed in social media, but the positive rewards offered by social media include release from loneliness and a sense of fulfillment that can come from sharing thoughts and feelings. In addition, many people feel pressured to use social media because of anxiety that they may be excluded from their group or become the target for malicious gossip if they do not.

My research team conducted a joint survey with a major social networking site operating company in 2010. The survey covered 56,272 people, and found that 52.1% of those at risk of Internet addiction responded that they felt that “human relationships via social networking sites are a burden.” In other words, many people are not turning to social media because it is enjoyable. Rather, they continue to use it because they cannot break away.

Although there are no survey data available that would allow us to make a direct comparison between Japan and other countries, it seems likely that the cultural climate in Japan puts people here at greater risk of bonding addiction than people elsewhere. The national culture places a strong emphasis on conformity, which means that Japanese people often tend to group into “village-type” societies. Examples include the groups formed by high-school girls, or the circles made up of mothers whose children attend the same nursery school or kindergarten. Within these groups, there is a strong pressure to act in the same way as other members. Anyone who refuses to join in may end up being ignored or rejected by other members of group.

In extreme cases, junior or senior high school students who neglect relationships over social media may become the target of bullying. Whenever the central “leader” of a group tweets about some trivial event in his or her life or posts an update on the way he or she is feeling, other members have little choice but to hit the “Like” button regardless of their true feelings. Any questions sent over social media must be responded to instantly. Social media were originally meant for asynchronous communication, but they are now becoming synchronous.

Smartphones have made Internet access smoother and easier than it was with conventional mobile phones. The vast majority of youngsters are now using social media over mobile devices such as smartphones. This puts them under even greater pressure to respond immediately, wherever they are. People with bonding addiction feel a compulsive need to maintain continuous access with their social media circle, clutching their smartphones throughout their waking hours, even when they’re using the toilet or taking a bath.

Japanese people tend to place great emphasis on the importance of social bonds in everyday life. In the five-yearly attitude survey “Japanese Value Orientations” carried out by the Japan Broadcasting Corporation (NHK), “Deepening ties with friends and family” was the second most popular leisure-time activity, after “Enjoying my hobbies.”

This idea of “bonds” has become more important than ever since the major earthquake and tsunami disaster of March 2011. Social media also proved extremely effective means of sending and receiving information in the aftermath of the disaster. This was another factor that has led many people to start using social media over the last couple of years. As a result, more young people than ever have become immersed in the world of social media.

I suspect that religion may be one reason why there are so many social media addicts in Japan. In Western societies, the Christian faith traditionally expected believers to attend church regularly and confess their sins to a priest. This custom brought relief from psychological stress. The rapid decline in church attendance in recent years means that it now falls on professionals like psychiatrists or psychotherapists to listen to people’s “confesssions.”

In Japan there are few Christians and very few people consult psychotherapists. Instead, people let out their psychological stress over social media.

Why Japanese Women Are Prone to Bonding Addiction

In our survey, we found a higher rate of bonding addiction among women than men. This, too, is related to Japan’s cultural characteristics. At the beginning of the eleventh century, Murasaki Shikibu, a lady-in-waiting at the imperial court and the author of The Tale of Genji, recorded her daily life in a famous diary. Other literature in diary form written by women during the Heian period (794–1185) includes The Diary of Lady Sarashina and The Gossamer Years. Diaries by woman are some of the foundational texts of Japanese literature.

I once analyzed the content of blogs from the United States, China, and Japan. I found that Japanese blogs tended to focus less on political opinion. In almost all cases, the writers discussed their own lives and their everyday feelings. Japanese people—and women in particular—have long had the custom of commenting about the things that happen around them by writing them down. This may well be related to the high frequency of social media use.

It used to be common for high school girls to write shared diaries, letters and notes with their friends among their friends. To some extent this longstanding cultural practice has been superseded by communication over social media.

Japanese women in particular tend to form extremely close-knit groups. The members of such groups are not just acquaintances or friends. The bonds between them go deeper than that. They are expected to show an almost excessive degree of consideration and concern toward their companions. Social media are becoming the main method of communication. One of the results is that there are now women who have become addictively immersed in the world of social media. They spend long periods of time repeatedly exchanging trivial messages, all the while feeling psychological strain because of their behavior.

The Need for Education and Specialist Treatment

The time Japanese people spend online is continuing to increase as a result of the spread of smartphones. It is easy to imagine that as even more wearable devices become popular, increasing numbers of people will spend almost all their waking time constantly online.

The likely result is that ever more people will suffer from Internet addictions that impede normal social functioning. This is an abnormal condition at the level of the individual—from the point of view of society as a whole, it means that overall production efficiency will fall.

At present, there does not appear to be any effective way to help people with Internet addictions or to prevent them from becoming addicted in the first place. First of all, we need education in schools. We should explain the dangers based on actual case histories. Families should be on the lookout for warning signs and must turn to appropriate treatment facilities as soon as possible. Only two facilities offer treatment at the moment—the National Hospital Organization Kurihama Medical and Addiction Center, and Seijō Sumioka Clinic. The government needs to put in place a policy for making more specialized treatment facilities available.

Source: Young, KS (1998), Caught in the Net: How to Recognize the Signs of Internet Addiction and a Winning Strategy for Recovery