Society Culture Jan 15, 2014
“Masters” athletic meets for the elderly are an increasingly common sight as Japan’s population continues to age. Some competitors are in their 90s and 100s. What is the source of their apparently bottomless reserves of energy? We talked to some of them to find out what makes these seniors stand out in an aging society.

The International Gold Masters 2013, held in Kyoto on October 5 and 6, 2013, brought together senior athletes from around the world. And it was here that 103-year-old runner Miyazaki Hidekichi made his bid for glory in the 100 meters race. At 11:40 on the morning of October 6, the gun went off for the start of the men’s 100 meters in the most senior age group, for competitors aged 80 and up. Miyazaki, running in lane 2, was the only runner over 100. The others were all tough veterans in their 80s, but inevitably the focus was on Miyazaki, with a full century under his belt. With an army of cameras trained on him, Miyazaki dug into his reserves of strength as he propelled himself toward the line. As he neared the finish, the applause of the crowd was deafening.

Miyazaki finished in a record time of 34.10 seconds. In fact, because of a favorable tailwind exceeding the permissible wind speed of 2.0 meters per second, the time will not count as an official record. Nonetheless, he beat his previous best of 36.77 seconds, achieved at the 34th Japan Masters Athletics Championships in Saga a month or so previous. “I’m happy with that,” he said, looking suitably pleased. Born on September 22, 1910, Miyazaki was 102 when he ran the Saga race on September 7. Shaving 2.67 seconds off that time in his hometown of Kyoto 14 days after his 103rd birthday, Miyazaki has reason to smile indeed. 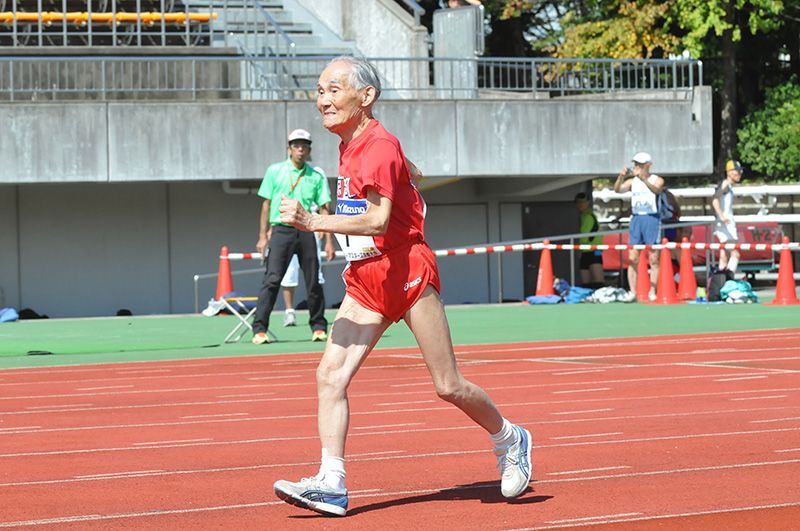 Miyazaki began competing in the Masters at a ripe age, but his life until then was by no means plain sailing. He was plagued by accidents and injuries, and also suffered serious illness. He was hospitalized for nearly three months in 2007 with a broken left leg, and confined to a wheelchair. Nonetheless, he worked doggedly at rehabilitation, and was eventually able to return to the athletics field. The motto that keeps him going? “You have to keep on keeping on.”

Aiming for a Masters Olympics

At the Kyoto Gold Masters, Miyazaki was the oldest of some 870 men and women participating from 11 regions of Japan and other countries. The meet was held at the Kyoto Aqua Area pool and Nishikyōgoku Athletic Stadium, and all the athletes taking part were aged 45 or over.

This was the second time the combined swimming and athletics event has taken place in Kyoto in recent years, following an early event in 2009. More than just a sports meet, the Gold Masters aims to encourage senior citizens to widen their social circles while maintaining their health and enjoying sports. Japan has one of the world’s highest levels of longevity, and the hope is that the Gold Masters will spread from Japan and lead to a Masters Olympics in the not-too-distant future.

The Power of Raw Eggs 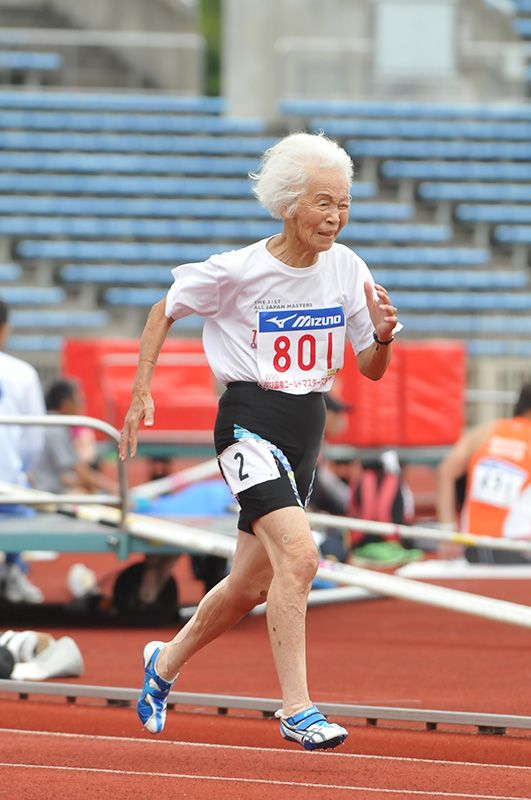 The climax was the W90 (90–94) 100 meters on the last day. Morita’s trademark sprint style is the wide swing of her arms, and the powerful pumping pushed her to an unstoppable speed from the first half of the race. She finished at 23.15 seconds, breaking the world record of 23.18 seconds that had stood for 10 years. Morita began competing in the Masters athletics 21 years ago, at the age of 69. The source of her energy? She says it is the raw egg she has for breakfast every morning.

Another woman who put in a remarkable performance was 77-year-old Nakano Yōko from Tokyo, who won the women’s Gold Masters Award. In the W75 (75–79) class she set competition records of 3 minutes 20.88 seconds in the 800 meters and 6 minutes 55.49 seconds in the 1,500 meters. She set a new world record in the 5,000 meters by crossing the line in a magnificent 24 minutes 3.90 seconds. This was the first new world record in the event for seven years. Nakano has always been keen on sports, and has skied all around the world. Turning 70 was the impetus for her to become involved in Masters athletics. She ran her first marathon in Honolulu at the age of 71, finishing the course with a string of fours—four hours, 44 minutes and 44 seconds.

Two more competitors at the center of attention were 96-year-old Watanabe Gentarō from Osaka, who triumphed in three events, achieving a time of 16.96 seconds in the M95 (95–99) class 60 meters (albeit with the assistance of a tailwind), 3.69 meters in the shot put (3 kilograms), and 7.21 meters in the discus (1 kilogram), and 66-year-old Watanabe Kazuo. Both are from Aichi. In fact, they are father and son.

Gentarō was vice-chairman of Japan Masters Athletics, which was founded in April 1980, and currently holds the title of emeritus vice chairman. He still competes in the 60 meters, shot put, and discus. His target is to run 400 meters in a time equivalent in seconds to his age in years. In 1998, when he turned 80, he crossed the line at 77.85 seconds in a punishing run that pushed him to the very limits of his aerobic threshold.

Other couples took part in races with a less openly competitive sense of rivalry. Ishikawa Tadashi and his wife, Yōko, both 80, are members of the Iwate Masters Athletics together. Having overcome the trauma of the Great East Japan Earthquake, they both competed in the 2013 Japan Masters Athletics Championships. This was the 26th consecutive year they had taken part. They have experienced their share of hardships along the way. As well as the earthquake disaster, they have both undergone surgery for cancer. At the Kyoto meet, in the M80 (men 80–84) class Tadashi was second in the 60 meters with a time of 9.37 seconds and third in the 100 meters at 15.32 seconds. In the W80 class, Yōko placed second in both the shot put (two kilograms) at 3.95 meters and the discus throw (0.75 kilograms) at 7.82 meters. By the end of the previous year, the devoted couple had managed an impressive haul of 58  medals between them. Speaking as one, they expressed their hope to collect more medals and keep competing together for many years to come.

Past and Future of the Japan Masters Athletics

The chief organizer of the International Gold Masters 2013, Kyoto is Japan Masters Athletics, the national federation. The federation was launched in 1980 by the late Oda Mikio, who acted as the first chairman. Oda earned his place in the history books as Japan’s first Olympic gold medalist, winning the triple jump at the Amsterdam Olympics in 1928. Japan Masters Athletics is now in its 33rd year. The current chairman is Kōnoike Kiyoshi (76) from Wakayama. The sixth person to act as chairman, Kōnoike is the unsung hero keeping the organization going from strength to strength.

The very first Masters Athletics meet was held in Wakayama in January 1978; the federation itself was launched two years later. As well as taking care of the logistics side of things in his role as chairman, Kōnoike also takes an active part as an athlete. In the Kyoto Masters, he took first place in the M75 (75–79) long jump with a jump of 3.81 meters. He was disappointed to come second in the 80 meter hurdles at 17.19 seconds–even though this time was still faster than the previous games record. Kōnoike has competed in 19 consecutive World Championships, more than any other Japanese athlete at this biannual event.

Kōnoike sees the Masters as a way to maintain his energy and stamina. His dream is to live to see a Masters Olympics take place one day. He also says he aims to be still running when he is 100. Kōnoike is one of over 10,000 Masters athletes in Japan. For them the Masters provides dreams and a sense of purpose. Their performances on track and field are an inspiration to us all.