Society Travel Jun 30, 2014
Japan’s iconic blue sleeper trains once crisscrossed the country, serving as a popular mode of transportation. But now only a handful are still running. In their place, “cruise trains” like the luxurious Nanatsuboshi in Kyūshū have begun to appear on the scene. Train buff Tsuchiya Takeyuki takes a look at the dramatic transformation of Japan’s sleeper trains, which mirrors the earlier change in the role of ocean liners.

Those who have seen James Cameron’s Titanic will recall that Leonardo DiCaprio’s character, Jack Dawson, boarded the doomed liner as a third-class passenger. People tend to think of the RMS Titanic as a super-luxury liner carrying wealthy passengers, but in reality the number of third-class berths outnumbered those in first and second classes combined. The Wright brothers made their first flight in 1903, but when the Titanic sank in 1912, passenger planes were still in their infancy. During this era, ocean liners served as transportation for the masses.

Jump to the present: in March 2014, the luxury cruise liner Queen Elizabeth drew attention for the rare spectacle of its calls at Japanese ports. Today, passenger planes are the dominant form of long-distance transportation. Ocean liners can no longer compete as a means of transportation; instead they are carrying vacationers on round-the-world and other cruises for pleasure.

From Blue Train to Bullet Train

The modern era of Japan’s sleeper trains started with the Asakaze, a limited-express train that ran between Tokyo and Hakata Station in Fukuoka, on the island of Kyūshū. The service began in 1956 and significantly reduced travel time between the two cities. It was when the new Series 20 passenger cars were introduced in 1958, however, that the line began to flourish. Convenient evening departures and early morning arrivals quickly made the train a favorite with passengers. Asakaze was nicknamed “Blue Train” for its distinctive blue carriages; the name eventually became the sobriquet for all sleeper trains. First-class carriages, popular with celebrities and the wealthy, featured private berths and accounted for roughly half of Asakaze’s 14 cars; the remaining second-class carriages catered to passengers of more average means. After Asakaze, though, the Series 20 carriages on other overnight sleeper trains plying between Tokyo and Kyūshū were almost entirely second class. Like the Titanic, sleepers were not just for the wealthy but served common people as a means of transportation. 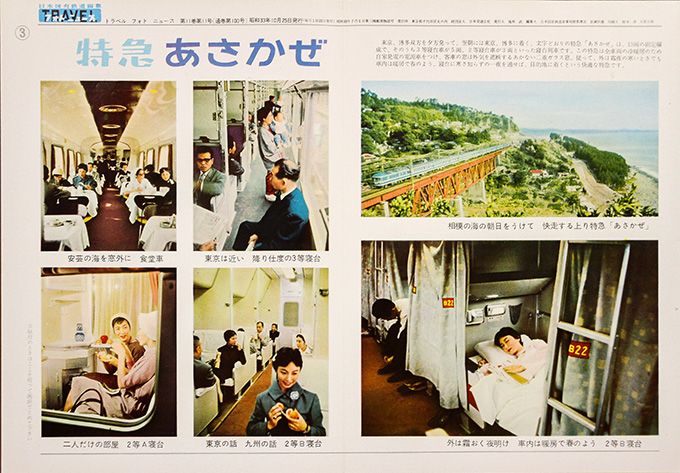 A page from the national railway magazine Travel Photo News featuring Asakaze. (Published on October 25, 1958. Courtesy of the Railway Museum.)

Series 20 cars were called “moving hotels” as they boasted air conditioning and other state-of-the-art equipment. The design of the cars, with the triple-decker berths in second class a mere 52 centimeters wide, however, remained based on a model of maximizing ticket sales. Over time, changes were made. The sleeping berths in the new Series 14 sleeper cars introduced in 1971 were widened to 70 cm, and the Series 24 cars introduced in 1974 shifted berths from a triple- to a double-bunk arrangement. The number of berths per carriage was also reduced with each new series: 54 for Series 20, 48 for Series 14, and 34 for Series 24. These changes were as much a response to a decline in ticket sales, however, as they were about passenger comfort. 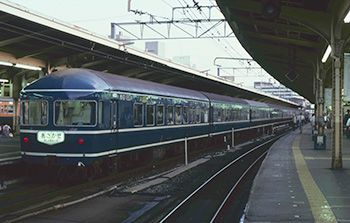 The main reasons for the decline in passengers were the expansion of Japan’s high-speed Shinkansen (new trunk line) bullet train service and the popularization of air travel. The bullet train began running between Tokyo and Osaka in 1964, and service was extended to Hakata Station in 1975. The roughly seven-hour trip between Hakata and Tokyo by Shinkansen was much shorter than what it took on the Blue Train. And air travel, with its distinct advantage in terms of travel time, grew in popularity as the introduction of larger aircraft made it an inexpensive and convenient mode of transportation. As a result, since 1975 Blue Train runs have steadily been cut back or eliminated, living on only as services connecting towns lacking airports or Shinkansen stations with major cities.

Putting Cruises on the Tracks 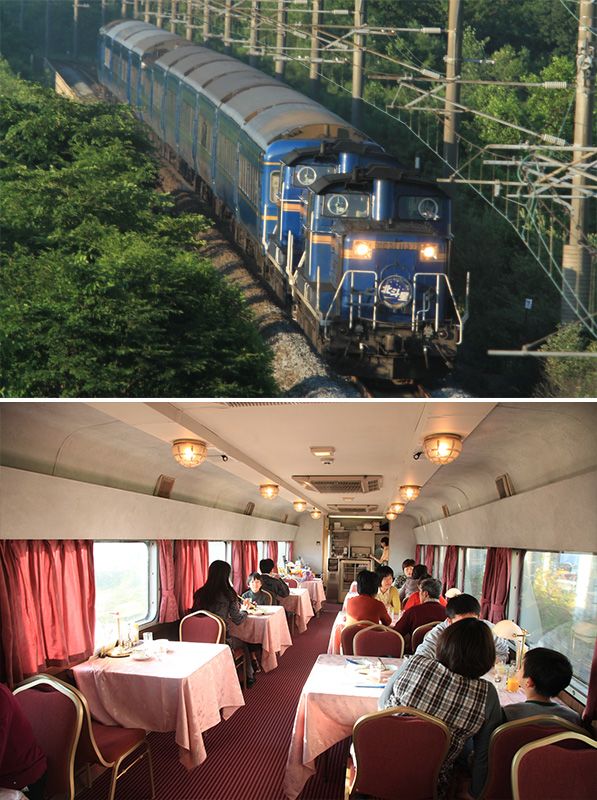 The Hokutosei, which runs between Ueno and Sapporo, lumbers through the countryside (above) while passengers relax in the dining car. (Photos by Kawai Satoshi)

The Seikan Tunnel, connecting Aomori on Honshū, Japan’s main island, with Hakodate to the north on the island of Hokkaidō, opened in 1988. Against this backdrop, thinking about overnight sleepers began to change when the Hokutosei, a line linking Hokkaidō’s capital of Sapporo and Tokyo’s Ueno Station, was being planned. Compared to the couple of hours needed to travel by plane (a trip of about three and a half hours, including airport access time), the Hokutosei would take 16 hours to make the trip. This made it a poor choice on its transportation merits. Similar to what had occurred with ocean liners morphing into cruise ships, the idea that emerged was to shift the focus from transportation and make the train ride itself an attractive travel experience.

Thus it was that the East Japan Railway Company (JR East) and the Hokkaidō Railway Company (JR Hokkaidō), which were formed when the national railway was privatized in 1987, decided to develop the jointly operated Hokutosei as a luxury train. In order to make riding the train a pleasurable experience in itself, the operators added sleeping cars with private compartments and dining cars with enhanced selections of fine cuisine. The move was a huge success. The booming economy at the time and public interest in the Seikan Tunnel helped spark what came to be known as the “Hokutosei boom.” 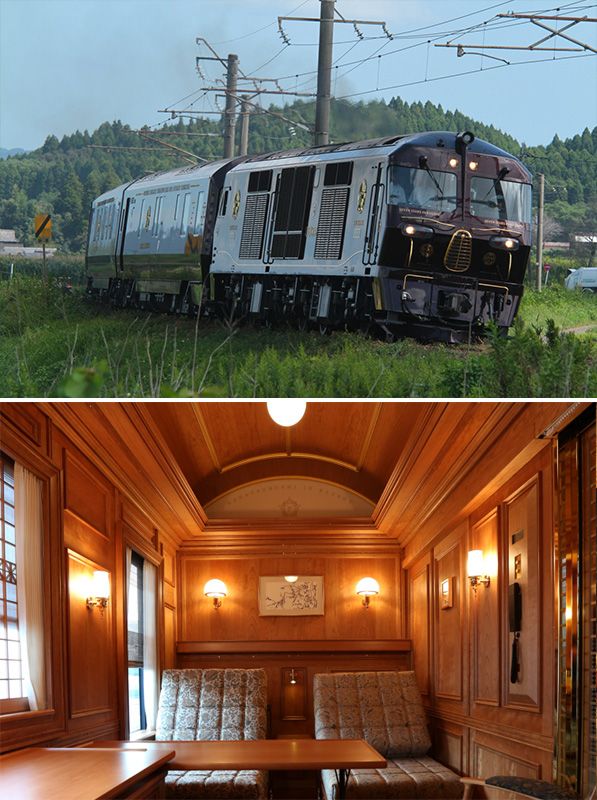 The exterior (above) and interior of JR Kyūshū’s Nanatusboshi in Kyūshū. (Photos by Kawai Satoshi)

Other trains followed the model of Hokutosei: The Twilight Express began running between Osaka and Sapporo in 1989, and the Cassiopeia started operating between Ueno and Sapporo in 1999. These were designed as “cruise trains,” with lounge and dining cars and sleeping cars with private compartments.

Continuing the cruise concept, the luxuriously designed “Nanatsuboshi (Seven Stars) in Kyūshū” began conducting passengers on multi-day trips around the sightseeing spots of Kyūshū in 2013. Unlike the Twilight Express and Cassiopeia, which can still appeal to business travelers with some time to spare, the Nanatsuboshi in Kyūshū has fully relinquished its public transportation role. Tickets are assigned through a lottery that requires several months advanced registration, and trips on the train all originate and terminate at Hakata Station. With such a system, one might question whether the train should be called a sleeper at all. Still, JR East and JR West have stated they are developing other cruise trains that, in all likelihood, will be modeled after the Nanatsuboshi in Kyūshū.

JR East’s new “cruise train” (left) and JR West’s new sleeper are scheduled to begin services in 2017. Images of the interior of the trains can be seen in the photo gallery below. (Images courtesy of JR East and JR West.)

Overnight Sleepers Come to the End of the Line 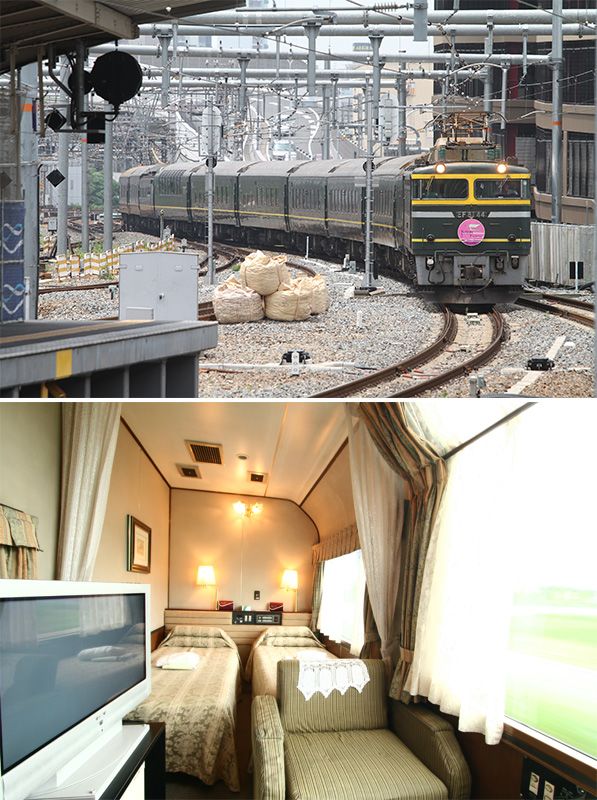 The Twilight Express as it travels along the tracks (top) and the interior of the train’s sleeping quarters. (Photos by Kawai Satoshi)

Blue Trains continue their decline as effective modes of transportation for rural areas. All overnight sleeper services between Tokyo and Kyūshū, including the Asakaze, were stopped in 2009, and the Akebono, which ran between Ueno and Aomori, was retired in March 2014. Along with the Twilight Express, Cassiopeia, and Hokutosei, the only other overnight sleeper trains remaining are the Sunrise Seto, running between Tokyo and Takamatsu in Kagawa Prefecture, and the Sunrise Izumo, running between Tokyo and Izumoshi in Shimane Prefecture. It was recently announced that the Twilight Express will be retired in spring 2015 due to age. This is a huge drop in Blue Trains, particularly when one considers that at their peak in 1975, they were making a total of 39 regular round-trip runs on a daily basis.

Along with the extension of Shinkansen lines—JR Hokkaidō plans to begin Shinkansen service between Aomori and Hakodate in March 2016, for instance—factors that have contributed to the decline in sleepers include the building of regional airports, the growth of inexpensive intercity bus services, and the nationwide spread of low-cost good-quality business hotel chains. The poor state of regional economies can also be seen as a major factor. After the bubble economy burst in the early 1990s, the economic situation outside of major metropolitan areas deteriorated significantly, and many local industries have been suffering. The continued exodus of people from rural areas to metropolitan centers is also a factor. With no sign of improvement on the horizon, public transportation in rural areas has taken a big hit, as can be seen by the struggle of numerous regional airports to draw customers. Perhaps the biggest strike against Blue Trains is the time they take to reach their destinations. As the country continues to age, we must take into account the desire of the middle-aged and elderly to take it easy, which inclines them to prefer shorter travel times.

The public transportation system is a microcosm of our society. And when we consider railways, we will fail to see the real picture if our thinking runs just on the tracks. The decline of the Blue Train for common people and the rise of cruise train services catering to the wealthy are phenomena that faithfully reflect the current state of Japan’s economy. 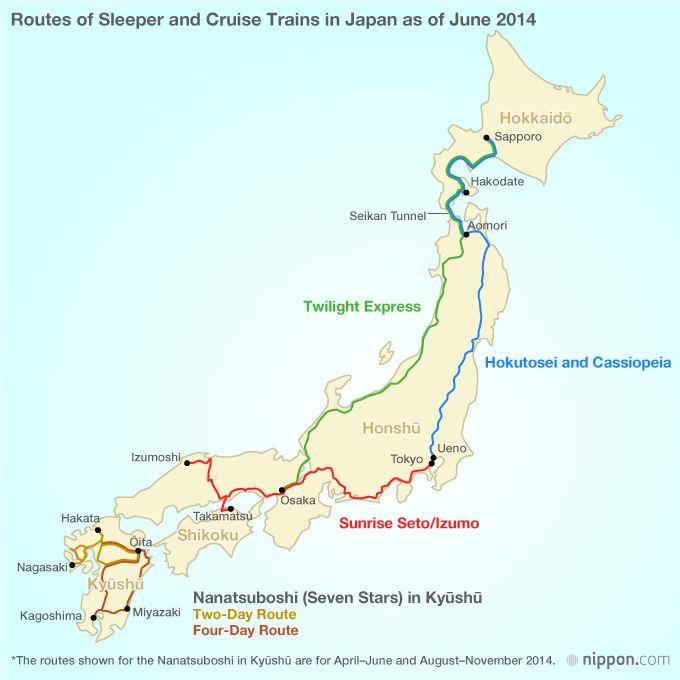 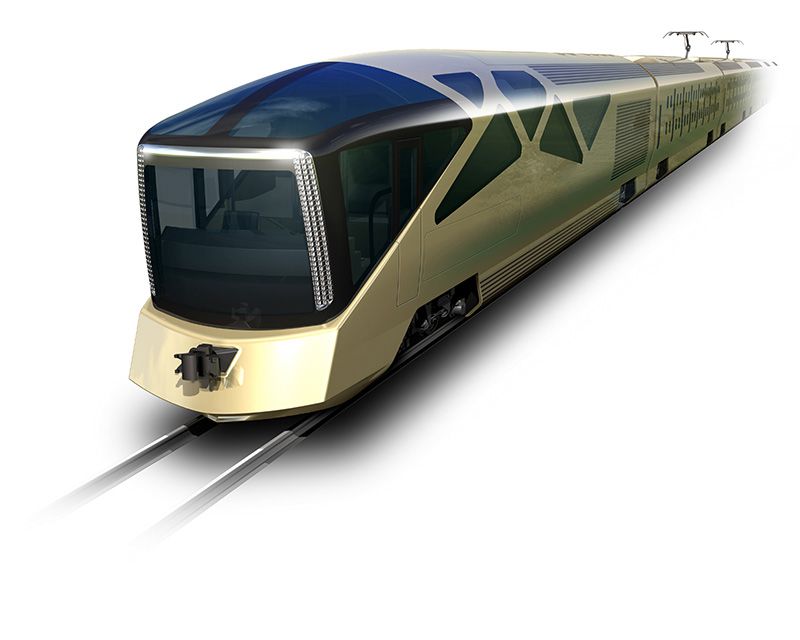 A rendering of the exterior of JR East’s newly planned cruise train. The train is scheduled to begin service in spring 2017. (Image courtesy of JR East.) 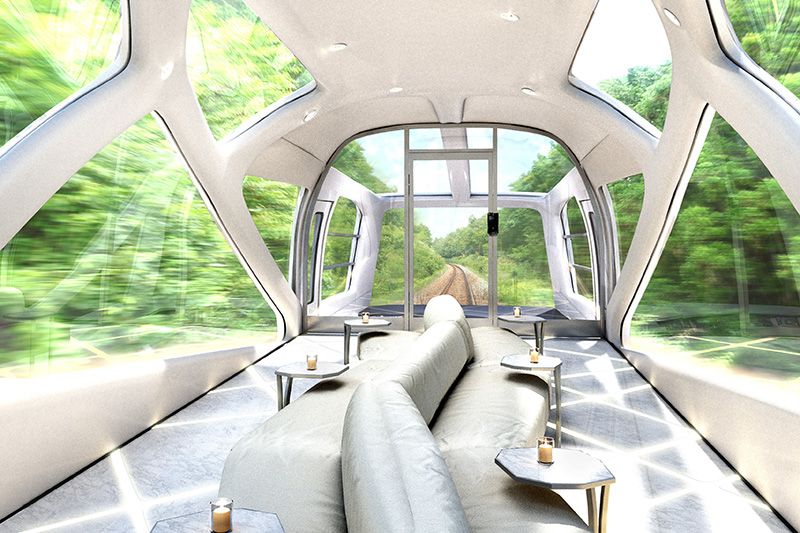 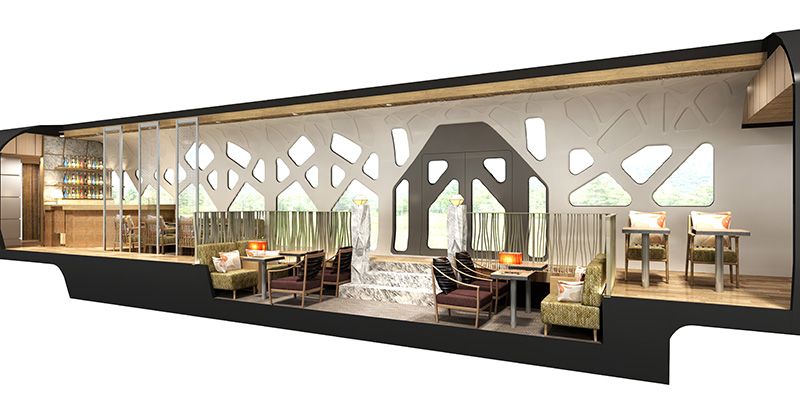 A rendering of the interior of the lounge car on JR East’s new cruise train. (Image courtesy of JR East.) 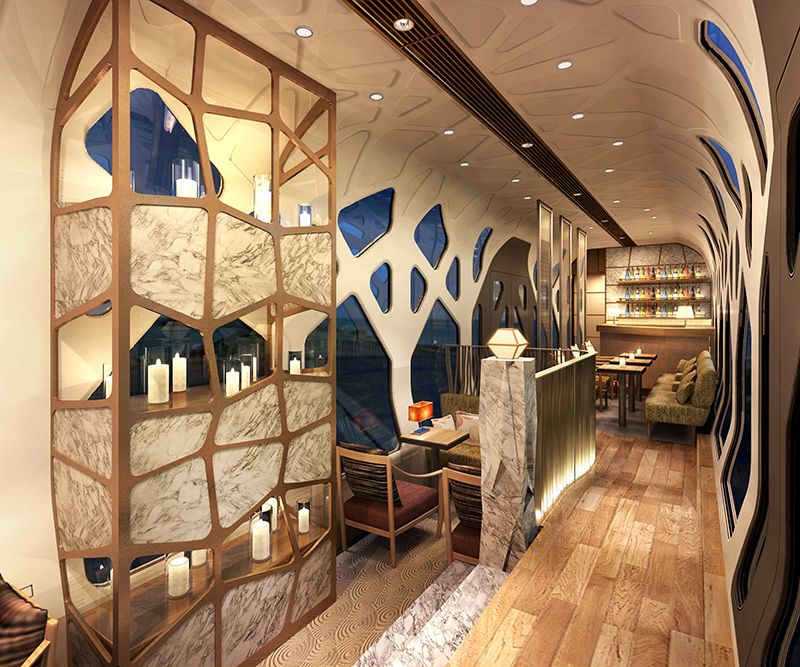 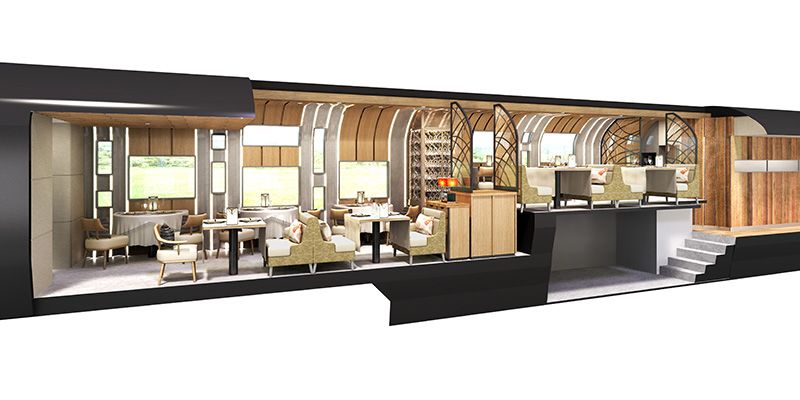 A rendering of the interior of the dining car on JR East’s new cruise train. (Image courtesy of JR East.) 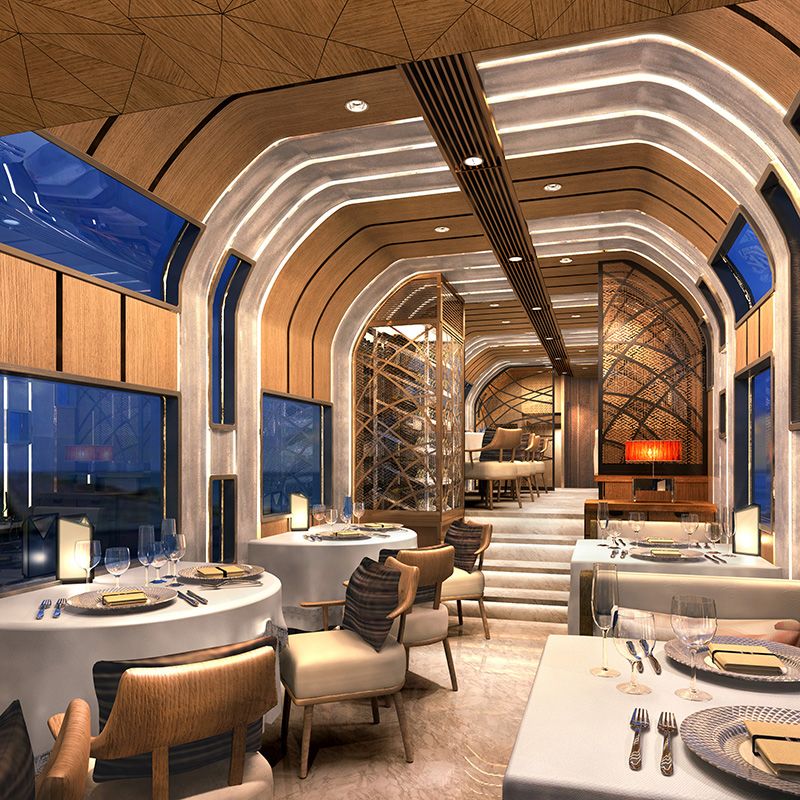 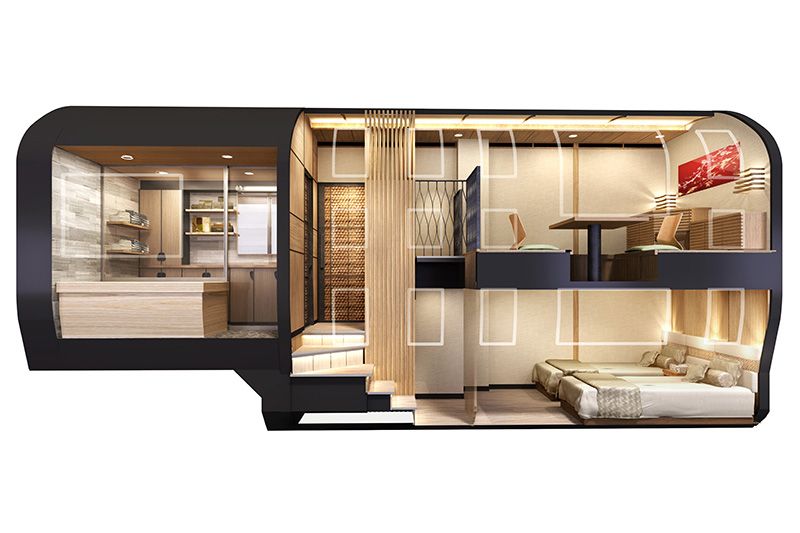 A rendering of the interior of a deluxe suite on JR East’s new cruise train. (Image courtesy of JR East.) 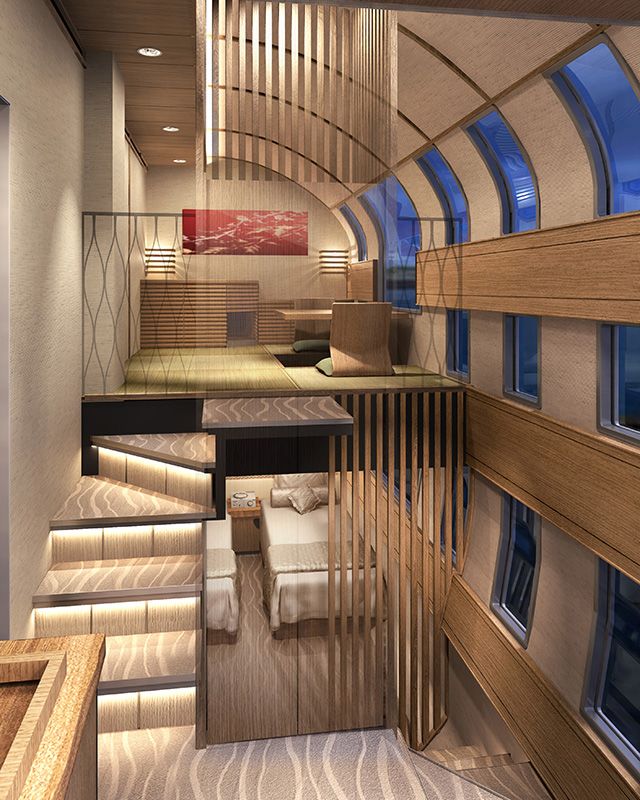 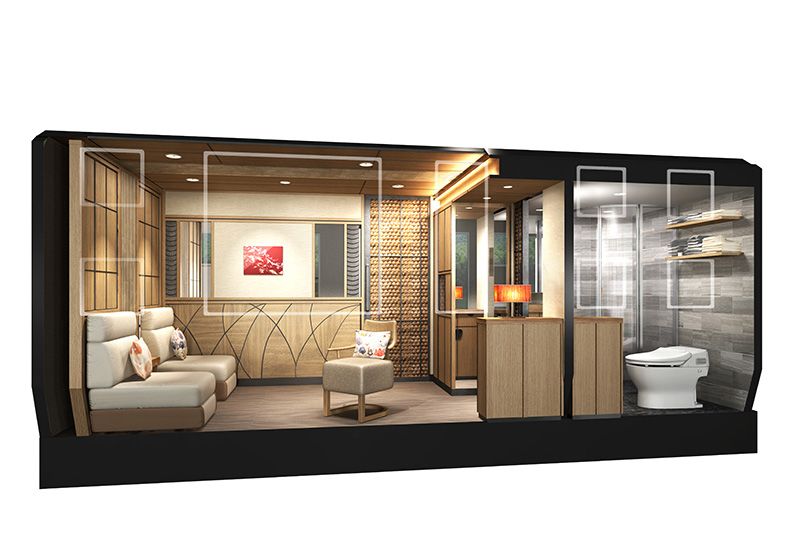 A rendering of the interior of a suite room on JR East’s new cruise train. (Image courtesy of JR East.) 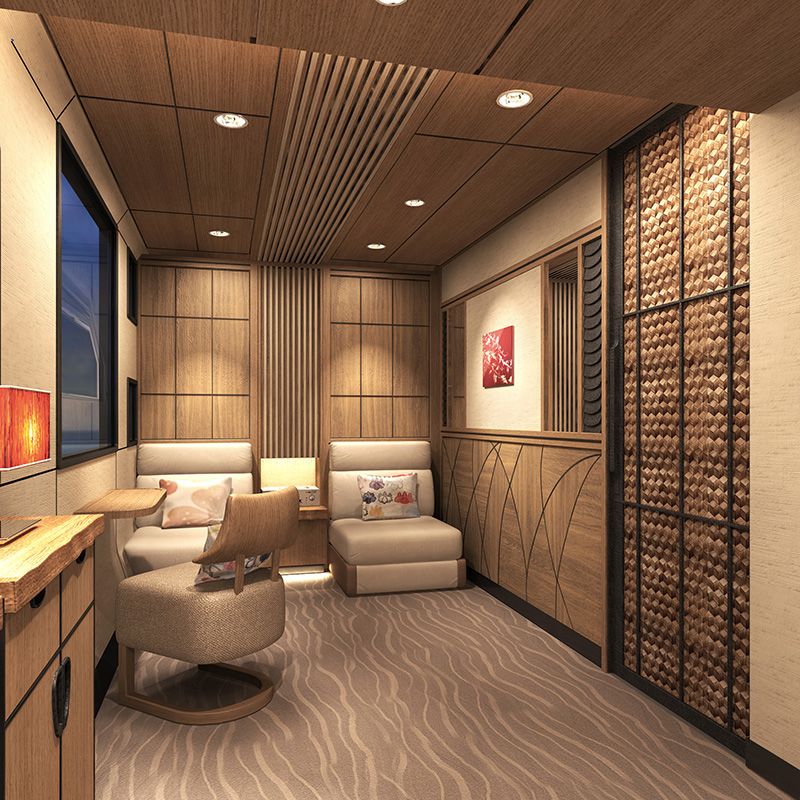 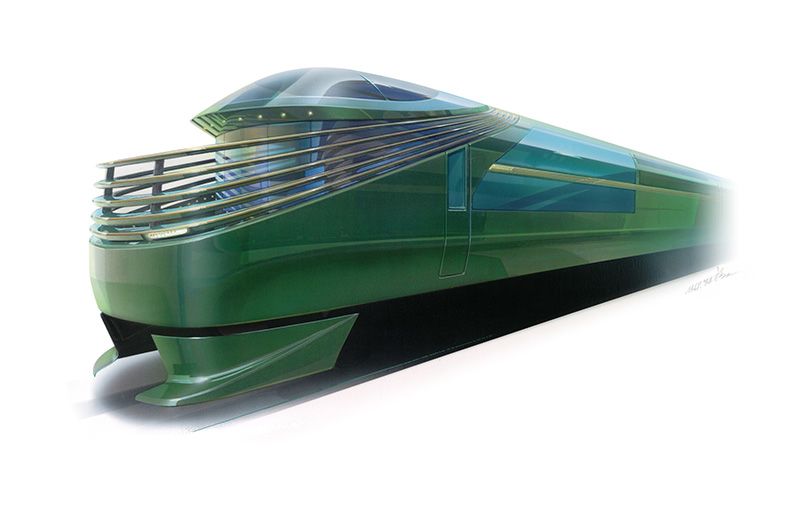 A rendering of the exterior of JR West’s newly planned sleeper train. The train is scheduled to begin service in 2017 and will link the Osaka, Kyoto, and Kobe with the San’in and San’yō regions. (Image courtesy of JR West.) 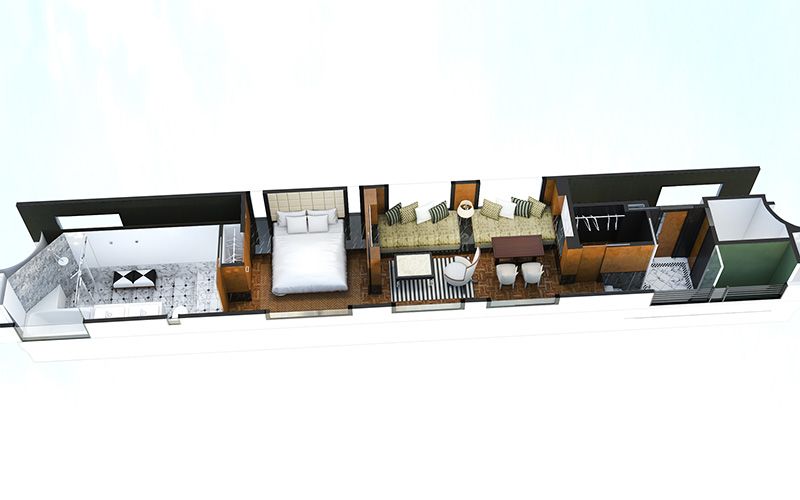 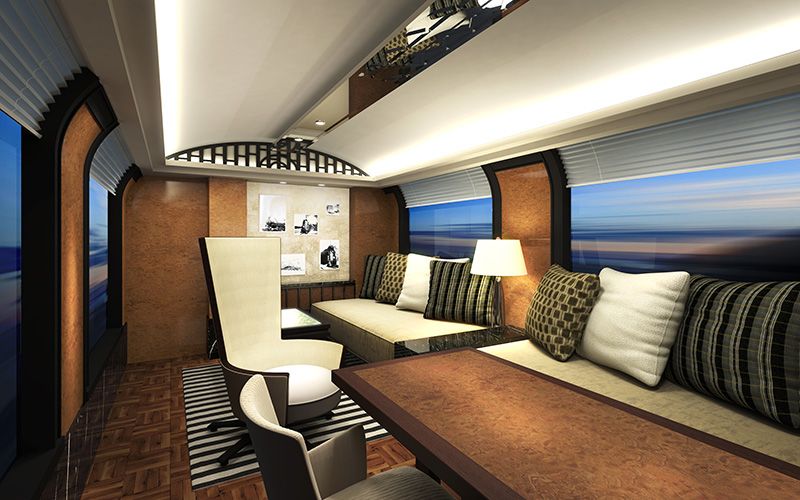 A rendering of the interior of the top-of-the-line suite’s living room on JR West’s new sleeper train. (Image courtesy of JR West.) 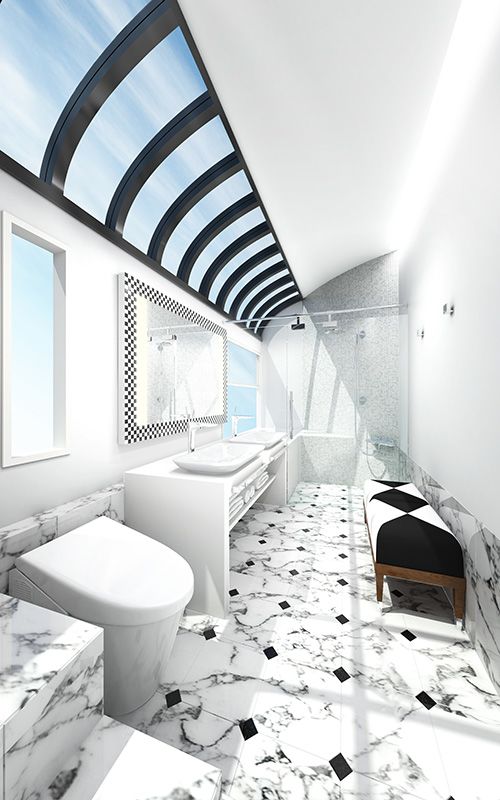 A rendering of the bathroom in the top-of-the-line suite on JR West’s new sleeper train. (Image courtesy of JR West.) 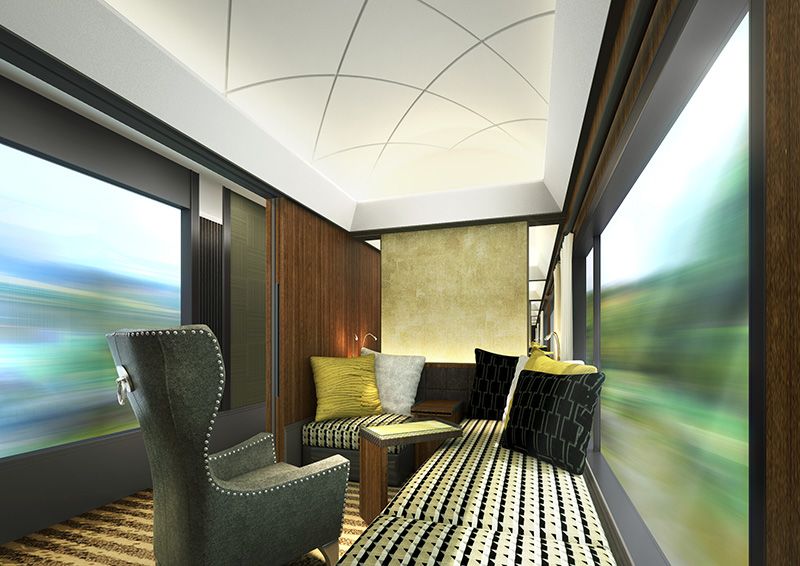 A rendering of a guest room on JR West’s new sleeper train. The train will feature three guest rooms per carriage. (Image courtesy of JR West.)