Science Technology Society Culture May 19, 2014
The uproar over the STAP cell papers and the doubts raised about their authenticity goes beyond science, offering an insight into the current state of Japanese society. Media sociologist Takeda Tōru describes Riken’s attempts to use public relations techniques to boost interest in its results and how this plan backfired.

News first broke on January 29 this year that a team at the government-funded Riken research institute’s Center for Developmental Biology had successfully created STAP (stimulus-triggered acquisition of pluripotency) cells. The day before the team’s papers were published in Nature, Japanese and world media introduced team leader Obokata Haruko and the details of her research.

Medical and biological experts were shocked by the simplicity of the process for turning ordinary body cells into stem cells through application of stress in an acidic solution. It formed a striking contrast to the complex genetic method required to create induced pluripotent stem cells, or iPS cells, which earned Kyoto University Professor Yamanaka Shin’ya a Nobel Prize in 2012. However, nonspecialist interest in Japan centered on the personality of the young, female researcher Obokata.

When Obokata hit the scene with this announcement, the Japanese media lavished coverage on her laboratory, which featured pink and yellow walls decorated with Moomin goods and stickers that she said she loved to collect. She wore a traditional kappōgi apron given to her by her grandmother rather than a lab coat when she was conducting research. And in her spare time—not that she had much, as she worked for more than 12 hours every day, including on weekends—she looked after a pet turtle that she kept in the laboratory. Numerous media sources repeated these stories. 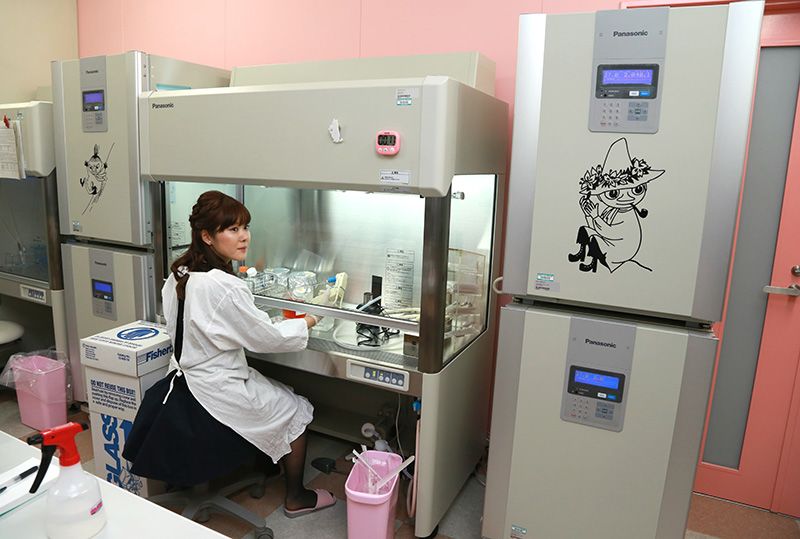 Team leader Obokata Haruko introduces her Kobe laboratory to the media after the press conference to announce the discovery of STAP cells on January 28, 2014. (© Jiji Press)

It later emerged that all of the appealing background provided for Obokata’s research announcement had been carefully constructed beforehand by senior researchers at Riken and the institution’s public relations team. Although this kind of approach may be unprecedented in the research world, it is a long-established PR technique.

On January 17, 1991, the US government and military launched an information offensive to coincide with the aerial bombing of Iraq that marked the start of Operation Desert Storm. This offensive drew on methods previously used by Michael Deaver, an advisor to Ronald Reagan. Following the Vietnam War, when footage of dead American soldiers contributed to widespread war weariness and prompted calls for an early exit, the US government and military put major efforts into developing a system to more effectively control information. Former PR man Deaver was appointed deputy chief of staff in 1981. His knowledge of how to create highly rated commercials led him to believe that there were two ways of controlling the TV media.

One is to be sure to choose topics that are certain to grab audience attention and package them with eye-catching visuals. For example, the government and military should imitate the snappy short stories that commercials use. The second key is to provide a never-ending flood of material. Deaver knew full well that television networks in a constant battle for ratings would find it difficult to pass up on broadcasting footage with clear audience appeal. By overwhelming networks with engaging material, all ready for prime time, Deaver was convinced that they would come to show only that material, without any external pressure.

Deaver’s system, first applied in the 1983 US invasion of Grenada and again in the 1989 invasion of Panama, was put into full-scale operation during Operation Desert Storm. It used footage from cameras mounted on the precision-guided cruise missiles launched in the initial bombing of Baghdad. The missiles seemed to have a will of their own as they flew through the air, locked on, and accurately destroyed their targets, and as viewers had never seen this kind of footage before, many were glued to the screen. Deaver’s system was immensely successful in projecting the image of a “clean war” in which military facilities were precisely destroyed with no collateral damage. It left television audiences with the impression of a new kind of “just” war.

Riken followed the same methodology in presenting its STAP cell findings. By complementing the young, endearing figure of Obokata with a kappōgi apron and pink laboratory, it provided a packaged visual feature for television stations to win viewers. And everything went according to plan: TV stations repeatedly aired these scenes, focusing their coverage on her personality throughout. The print media also picked up the images to use in telling Obokata’s life story.

Riken opted for this PR approach because in the science world, too, it is important to “win.” Without ample public assistance and funding, there is no way to raise the vast research budgets required in cutting-edge fields. Naturally, excellent results are vital for securing government approval and budget allocations and establishing cooperative relationships with industry, but support from the public is also necessary. Politicians connected with science administration and business leaders not fully up to date with the latest advances pay a great deal of attention to what civil society thinks.

The US government and military insisted that the Gulf War was a “just war” and worked to keep the public on their side. Riken, with the same need to win public support, attempted to manage the media in the same way. Another factor in Riken’s case was the presence of a powerful rival: Kyoto University’s Yamanaka Shin’ya. The Riken team may have felt the need to construct a character more appealing than the Nobel Prize–winner.

A Plan Goes Up in Smoke

However, in putting the focus too much on Obokata, Riken’s plan backfired. The media zoomed in on her private life after the January 28 press conference to the point where she could no longer go out in public. Unable to talk to Obokata directly, the tabloid weeklies began producing a mishmash of facts and gossip about her boyfriends and relationships.

Interest in Obokata spread among Internet users, who started checking through her doctoral thesis. They discovered that photographs she used in the Nature papers appeared in an entirely different context in her thesis and that she had copied large sections of material without properly attributing the sources. As doubts were raised about falsification of some other photos in the Nature papers, Riken was forced to launch an investigation. On April 1, the investigative committee found that Obokata was at fault. Riken President Noyori Ryōji stated that after the necessary appeals process he would “recommend that one of the papers in question be retracted.”

Obokata responded by holding her own press conference on April 9 and expressing dissatisfaction with the results of the investigation. Specifically, she claimed that her reuse of the same photographs from her thesis had been a simple mistake, that there had been no ulterior motive in adjusting photographs to make them clearer, and that she could not accept the committee’s conclusion that she had been guilty of falsification and misconduct.

At Obokata’s press conference, she could only declare through tears that STAP cells really exist, with no more than a vague hint that a third party had been successful in reproducing her results. Even so, she won support from people who felt that Riken was scapegoating her. There was also an element of reaction against the accusations of the media, which had suddenly turned on her when the charges of misconduct arose. Naturally, the situation may change again.

The unfolding events now seem to be packaged with more focus on the Riken-versus-Obokata story than on scientific fact. Society has no interest in the truth outside the framework of a personality-based story—or, to put it the other way around, nothing else matters so long as there is a compelling story to tell. The media frenzy surrounding Samuragōchi Mamoru, the composer who falsely claimed to be deaf, was one recent case where the truth was buried under the weight of a story. The STAP cell uproar looks to be developing into another.