How NHK Lost Its Way

Society Culture Jul 23, 2014
The political independence of NHK, Japan’s public broadcasting behemoth, has come under sharp scrutiny in the wake of controversial comments by its newly appointed president, an Abe appointee. Media scholar Hayashi Kaori explores the ideals that long guided public broadcasting in Japan and the forces that seem to have driven it off course.

NHK (Japan Broadcasting Corporation), Japan’s answer to the BBC, is under fire yet again, and losing its orientation as a body of public broadcasting.

The immediate cause of the latest uproar was a series of highly controversial remarks by newly appointed President Momii Katsuto in his first public statement as the organization’s chief executive officer. At his inaugural news conference on January 25 this year, Momii in effect rejected the principles of political neutrality and journalistic impartiality at the core of public broadcasting, arguing, “We can’t say ‘left’ when the government is saying ‘right.’” He also dismissed claims stemming from the Imperial Army’s practice of forcing Asian women into prostitution during World War II, arguing that such wartime practices have “existed in every country.” His comments drew sharp criticism from inside and outside Japan.

Embracing the Model of Private Business

Momii’s appointment marks the third time since 2008 that a corporate executive from the private sector has been tapped to head NHK. The selection of a business leader to fill the top post, a centerpiece of NHK’s structural reform, has been treated as a symbol of change at an organization widely associated with bureaucratic bloat and inertia. Unfortunately, from the time he assumed the post, Momii has displayed a profound ignorance of the fundamental principles of public broadcasting.

Critics have also questioned the eligibility of recent appointments to the Board of Governors, NHK’s top decision-making body. One new appointee, a popular novelist, engaged in electioneering after assuming his post early this year, campaigning for former Self-Defense Forces officer and right-wing nationalist Tamogami Toshio in the February Tokyo gubernatorial race. Another recently appointed governor has come under scrutiny for an essay (distributed at a memorial ceremony last October) praising the right-wing extremist Nomura Shūsuke, who committed suicide in 1993 in the office of the liberal daily Asahi Shimbun. Both governors, appointed by Prime Minister Abe Shinzō, were instrumental in rallying support for Abe’s second bid for leadership of the Liberal Democratic Party in 2012, and both are known to be close to the current administration. A third appointee to the board was Abe’s tutor during elementary school.

All the figures at the center of the recent controversy are occupants of the posts that were created with much fanfare as part of a package of internal reforms adopted under NHK’s fiscal 2006–8 business plan. Plagued by a series of scandals culminating in 2005, the broadcaster hoped to cultivate the dynamic image of a private corporation by appointing a president from the private sector. At the same time, it strengthened the authority of the Board of Governors, transforming it from an essentially ceremonial entity into a true decision-making body with oversight over management. Public confusion and outrage surrounding the latest appointments need to be viewed in the context of this much-touted reform which was carried out less than ten years ago.

NHK as a Cultural Institution

Concerns over NHK’s relationship with the powers that be extend back as far as the organization itself. The issue of political interference in public broadcasting comes up frequently; public broadcasters around the world face considerable challenges preserving their editorial independence and can easily become tools for political interests. But prior to around 2000, any governmental interference in NHK’s programming or editorial policy had been of a fairly subtle and indirect variety.

As Japan’s only nationwide broadcaster, NHK left the country’s commercial networks far behind, growing into the world’s second-largest broadcast agency after the BBC. Today’s NHK is a media giant, with over 10,000 employees, two terrestrial television stations, two satellite television stations, three radio stations (two AM and one FM), and a division for international broadcasting services. In addition to its basic programming and broadcasting functions, it runs one of Japan’s largest polling institutes and has its own Science & Technology Research Laboratories, not to mention various subsidiaries devoted to production and other operations. It also finances the world-class NHK Symphony Orchestra.

Supported by a wealth of talent and funding, NHK has played a pivotal role in the formation of Japanese contemporary culture over the years by producing documentaries and dramas of high quality, as well as long-running favorites such as radio and TV physical exercises, Nodo jiman (Amateur Singing Contest), and Kōhaku uta gassen (NHK Red and White Year-end Song Festival), a New Year’s eve institution in Japan.

NHK’s massive budget, exceeding ¥600 billion, is funded almost entirely by TV “receiving” or license fees, imposed on each household and business with a television set. Even in the absence of penalties for nonpayment, a remarkably high percentage of Japanese households pay their NHK fees. Although the percentage is substantially lower in the Tokyo area than in the provinces (60% versus 90%), the overall average topped 70% in 2011.(*1)

Despite these achievements, some analysts hold that the principle of public service broadcasting has never really taken root in Japan. According to sociologist Matsuda Hiroshi, a former journalist specializing in broadcast media, about a third of respondents surveyed by NHK in 1997 characterized the broadcaster as “state-run,” and over 20% characterized it as semi-governmental and semi-private. Only a third correctly identified it as a special public service entity supported by license fees. Apparently NHK no longer carries out this particular survey, but from 1980 to 1997, when it conducted the study regularly, the results were largely unchanged.(*2)

One can identify a number of factors to account for this low level of awareness, but one of the most important is the fact that the Japanese tend to associate anything identified as public (kōkyō) with the state. The word kōkyō has stronger nuances of officialdom than its English equivalent, “public.” Linguistically speaking, this may relate to the fact that the older term ōyake, written using the first character in kōkyō, was traditionally used in reference to the emperor. Whatever the reason, the Japanese term kōkyō has strong associations with governmental authority, or else it sounds aloof and pedantic, without denoting anything concrete.

Although NHK has not been a state-run broadcaster since World War II, the power of the state has always loomed in the background—if not, it could never have grown into the media giant it is today. Even today Japanese people tend to think of NHK not as their own broadcasting service but as something bestowed from above by the government. This lack of understanding of, or interest in, the fundamental character and mission of public broadcasting among ordinary people, has nudged NHK to collate the meaning of its signature word “public” with its most banal interpretation: “mass audience”.

Ignored by the Young

NHK has made strenuous efforts to transform itself in recent years not only through organizational restructuring but also through programming designed to dispel its overly serious, somewhat pompous image. The prime-time lineup in particular has leaned increasingly toward quiz, variety, and talk programs featuring celebrities, emulating the light-entertainment genres popularized by the commercial networks. Underlying this shift in programming policy is a deep sense of alarm over the loss of younger viewers.

A 2010 NHK survey found that only about 40% of media consumers between 13 and 19 years of age spent 5 minutes or more each week watching an NHK TV station. In other words, roughly 60% of Japanese teenagers today have virtually no weekly contact with NHK. The survey also found that this age group spent an average of just 10 minutes watching NHK programs each day. These figures rose sharply with age. Among respondents 70 and older, a full 90% reported watching NHK at least 5 minutes a week, and the average daily viewing time was more than two hours. Clearly, NHK has assumed the character of a senior-oriented media service.(*3) There are grave concerns within the network that, if this trend continues unchecked, eventually no one will be watching at all. 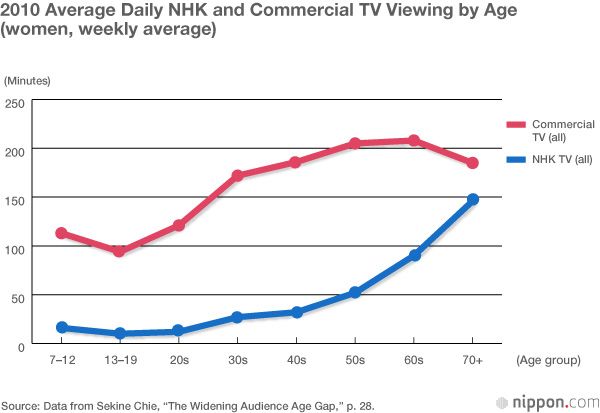 In its pursuit of wider popular support, NHK has also been struggling to find its bearings in a society that has been moving toward the right, ideologically speaking. Since 2001, when NHK aired a controversial program dealing with the issue of wartime “comfort women,” the network has come under attack from conservative commentators and politicians, who have blasted its broadcasts as biased and unpatriotic. Pundits and critics of this persuasion have become a powerful presence on the Internet in recent years, attracting a considerable number of youthful followers. Recently, NHK has been anxious to convince the public that its mission as a broadcaster is to “serve Japan.”

Sensitive to such charges from the outset, Momii sought to avoid ideological disputes at his inaugural press conference. “There’s no need to define NHK as right or left or center or anything like that,” he said. “As long as we comply with what’s written in the Broadcast Law, then I think we’ll be fine.”

At the same time, however, speaking of his plans to pour more resources into international broadcasting, Momii declared his support for the views of the Japanese government by stating, “on territorial issues like the disputes over the Senkakus and Takeshima, for example, I think it’s only natural that we clearly espouse the Japanese position.”(*4) The overall thrust was that the new chairman hoped to steer clear of controversy, focus on compliance with the letter of the law, and above all avoid coming under attack from those who style themselves patriots.

The Dangers of Playing It Safe

Avoidance of controversy, pandering to audiences, and parochial nationalism—these would appear to be the three basic tenets of NHK’s current operations. They are also diametrically opposed to the original spirit of public service broadcasting as it developed after World War II. The postwar public broadcasting system was born out of remorse and a new awareness of the need to keep the media from becoming a tool of government propaganda, to avert the dumbing down of content in pursuit of mass audience appeal and commercial profit, and to help prevent public opinion from sinking into the kind of narrow, parochial nationalism that leads to disastrous policy choices.

Seen from this perspective, NHK appears to have lost its ideals in recent years, and the wholesale reforms launched in 2006 seem only to have exacerbated its disorientation. Amid the general Japanese enthusiasm for deregulation and “new public management,” NHK lost sight of the classic civic virtue of serving society by analyzing diverse issues critically and fearlessly as it wandered off blindly into the labyrinth of populism.

(*4) ^ The Senkaku Islands are claimed by China as the Diaoyu Islands, while the Takeshima islets are currently under the control of South Korea, which calls them Dokdo.