Society Culture Jul 25, 2014
The upcoming wedding of Princess Noriko, the second daughter of Prince Takamado, may be welcome news, but the imperial family still faces dire prospects related to its decreasing numbers. No solution is in sight for averting the impending crisis.

In late May 2014, Princess Noriko became engaged to the eldest son of the chief priest of Izumo Taisha shrine. The 25-year-old princess is the second daughter of the late Prince Takamado, Emperor Akihito’s cousin. She will be leaving the imperial family when she weds her 40-year-old fiancé in the fall, as dictated by the Imperial House Law. Prince Katsura, Prince Takamado’s older brother, passed away at the age of 66 just 12 days after the engagement was announced, while their eldest brother, Prince Tomohito, passed away two years ago. Only male offspring in the male line whose father or paternal grandfather was an emperor can succeed to the throne in Japan, and age and the marriage of female members are now presenting the imperial family with a crisis in numbers.

Realistically speaking, Prince Hitachi and Prince Mikasa will probably die before their turn comes around. Neither the crown prince and princess nor Prince and Princess Akishino can be expected to bear any more children, given their age. The only hope for the continuation of the male line is that Prince Hisahito will one day marry a woman and have a son. Half of the 14 female members are either single or underage and are likely to eventually marry out of the family. In anywhere from 10 to 30 years, the imperial family could dwindle down to just 5: the crown prince and princess, Prince and Princess Akishino, and Prince Hisahito.

More than anyone, Emperor Akihito himself fears the cessation of the imperial family. “The question of the imperial succession was always an urgent issue,” reveals Former Grand Chamberlain Watanabe Makoto, who served under the emperor for over 10 years, until 2007. “The issue plagued His Majesty’s mind constantly and so deeply that it kept him up some nights.”

The Constitution of Japan stipulates that the emperor “shall not have powers related to government,” preventing him from changing the laws regarding the imperial family at will. Emperor Akihito must quietly endure the torture of being unable to do anything about the crisis befalling his own family.

Emperor Akihito is descended in a direct male line from Emperor Kōkaku, who reigned six generations ago, in the late Edo period (1603–1868). Emperor Kōkaku’s son and successor, Emperor Ninkō, was not the empress’s child but that of a concubine. Emperors Kōmei, Meiji, and Taishō were all born to concubines as well, and Emperor Meiji’s empress consort did not bear a single child. According to the Imperial Household Agency, nearly half of the 125 emperors were men born out of wedlock.

Emperor Meiji is often depicted as a strong man, but of the 5 boys and 10 girls whom he bore between his 5 concubines, 2 were stillborn and 8 died in infancy. The only son who lived to adulthood was Emperor Taishō. The Chrysanthemum Throne barely made it to the next generation.

Even if Emperor Meiji had no sons, however, an heir probably would have been chosen from among the princely houses related to the emperor, following precedent. Historically, there have been instances of 8- or 10-degree relatives from collateral houses succeeding to the throne. Until the Meiji era (1868–1912), concubines and collateral houses served to provide a safety net to ensure succession by males in the male line of descent.

Emperor Taishō was a man of letters and chose not to have concubines. Although he was prone to illness since childhood and sat on the throne for only 15 years, he and the empress had four children, all sons: Emperor Shōwa, Prince Chichibu, Prince Takamatsu, and Prince Mikasa. For a while, the imperial succession appeared secure.

The post–World War II Imperial House Law of 1947 excluded illegitimate offspring from the imperial family and did not allow them to succeed to the throne. Meanwhile, the rule that only male offspring in the male line could become emperor was carried over from the Meiji Imperial House Law.

At the time, Emperor Shōwa had three younger brothers, as well as two sons, so there was little concern about male-line succession.

A look at fertility rates and other figures show how difficult it will be to keep the succession going with just male descendants in the male line. Supposing that the current generation has five male-line males, and using a fertility rate of 1.29 and a male-to-female birth ratio of 1:1, there would be 3.23 male-line males in the next generation, 2.08 in the third, and 1.34 in the fourth. The numbers will fall with each generation.

The Constitution of Japan only says, “The Imperial Throne shall be dynastic,” and does not specify the emperor’s sex. A revision of the Imperial House Law’s stipulation limiting eligibility to “male offspring in the male line” is all it will take for a steady line of succession.

No Female-Line Emperors in the Past

Based on this thinking, in 2005 the Advisory Council on the Imperial House Law under the administration of Prime Minister Koizumi Jun’ichirō recommended adopting the principle of primogeniture regardless of sex. In short, it suggested approving female emperors and female-line emperors born from female emperors. In an opinion poll conducted at the time, around 80% of those surveyed said they did not mind a female emperor.

But there are those in Japan who are adamant about keeping to male descendants in the male line. The history and tradition woven under male-line descent are what lend authority and dignity to the imperial family, they argue, and people of today should not arbitrarily tamper with this.

Over the course of Japan’s history, there have been 10 reigns by 8 female emperors, all of whom were fathered by an emperor. Defenders of the male-lineage tradition point out that the women’s reigns were temporary, anomalistic measures to cope with such circumstances as political conflict or an infant male heir. All of the female emperors were single at the time of their reign, and their children did not succeed them to the throne. In other words, there have been no female-line emperors. 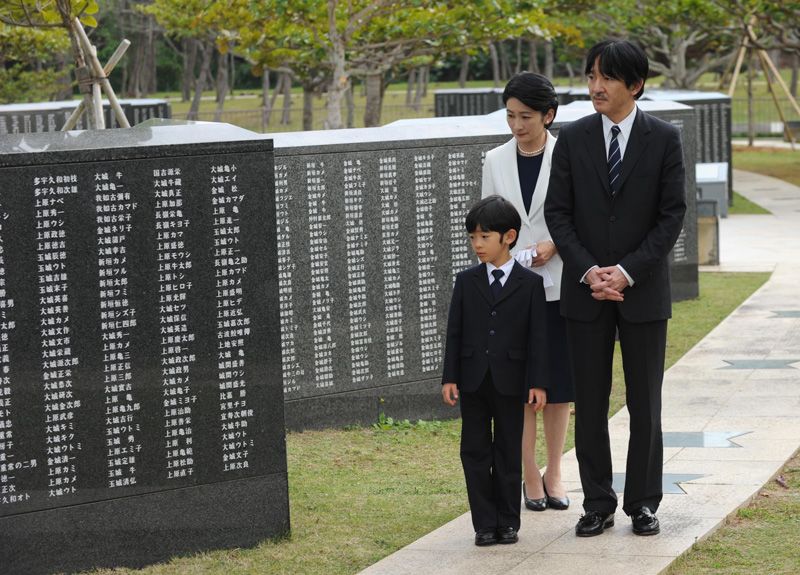 A Prince’s Birth Silences the Debate

Soon after the Advisory Council on the Imperial House Law submitted its report in 2005, Princess Akishino became pregnant with her third child. Given that the child could be a boy, the government put off revising the law and shelved the report. In 2006 the princess gave birth to Prince Hisahito, the first male born into the imperial family in 41 years. The imperial succession debate quickly died out as a result.

In recent years, a new plan has been advocated in which female members of the imperial family would remain in the family after marriage and become the heads of their own branch houses. The logic behind this plan is that the succession problem can be set aside for the moment, now that hopes are pinned on Prince Hisahito, the only male-line male among Emperor Akihito’s grandchildren; and that creating distaff branches will prevent the imperial family from growing smaller for the time being.

In 2012, the government led by the Democratic Party of Japan summarized the issues regarding the creation of distaff branches after surveying experts and those in financial, labor, and other circles. The climate of opinion was that the most realistic and popular solution would be to have Emperor Akihito’s three granddaughters—Princess Aiko, the daughter of Crown Prince Naruhito, and Princess Mako and Princess Kako, the daughters of Prince Akishino—stay in the imperial family even after marriage and head distaff branches that would retain royal status for only one generation.

But the DPJ subsequently lost power to the Liberal Democratic Party of Japan, and Prime Minister Abe Shinzō, who is said to be in favor of maintaining the male-lineage tradition, has taken no interest in the issue. And so, Emperor Akihito’s anguish continues.

Little Public Interest in the Issue

Article 1 of the Constitution states, “The Emperor shall be the symbol of the State and of the unity of the People, deriving his position from the will of the people with whom resides sovereign power.” Yet the general public shows little interest in the questions of the imperial succession and distaff branches. No politician sees the impending crisis, either. While 80% of the public supposedly approves of a female emperor, what most respondents meant was a half-hearted “Why not?”—based on nothing more than a vague image.

Very few people are aware of Emperor Akihito’s anguish. Change in the imperial house system depends on the growth of public interest in the question of what they want the imperial family to signify and on the serious determination of the government. It would also be advisable for Crown Prince Naruhito, Prince Akishino, and other members of the imperial family to let the people know what their own thoughts are on the matter. If the status-quo approach continues, they may end up sitting idly by as their own family dies out.

(Originally written in Japanese on July 8, 2014. Banner photo: Princess Noriko, second daughter of Prince and Princess Takamado, and Senge Kunimaro, a senior priest at Izumo Taisha shrine, attend a press conference at the Imperial Household Agency on their engagement, held on May 27, 2014. © Jiji Press.)