Japanese Companies Looking Outside the Fold for Executive Talent

Economy Aug 14, 2014
Recent moves by high-profile Japanese corporations to bring in outsiders to serve as chief executive are being hailed as a major shift from the longstanding Japanese tradition of promoting corporate executives from within. What is driving these unconventional appointments, and what are their chances for long-term success in Japan’s deeply entrenched business culture?

Suntory, Takeda Pharmaceutical, and Shiseido are among the top Japanese corporations that have made headlines of late by tapping outsiders to serve as company president. The media have seized on these appointments as a sign that Japanese businesses are ready to abandon their longstanding preference for homegrown managers in favor of “professional executives” with established reputations. But can Japan’s big corporations really change their ways?

An Influx of Outsiders

Suntory Holdings is one of Japan’s top alcoholic beverage and soft drink manufacturers, with the nation’s third-highest share of domestic beer sales. In May 2014, it acquired leading US spirits maker Beam for $15.8 billion as part of an aggressive overseas expansion strategy. As of October 1, Suntory’s new president will be Niinami Takeshi, former chairman of Japan’s second largest convenience store chain, Lawson. What makes this newsworthy is Suntory’s history. The man who recruited Niinami is current Suntory President Saji Nobutada, the grandson of company founder Torii Shinjirō. Suntory has been under the control of a single family for four generations. Its next president will not only be someone from outside the family, it will be someone from outside the company. 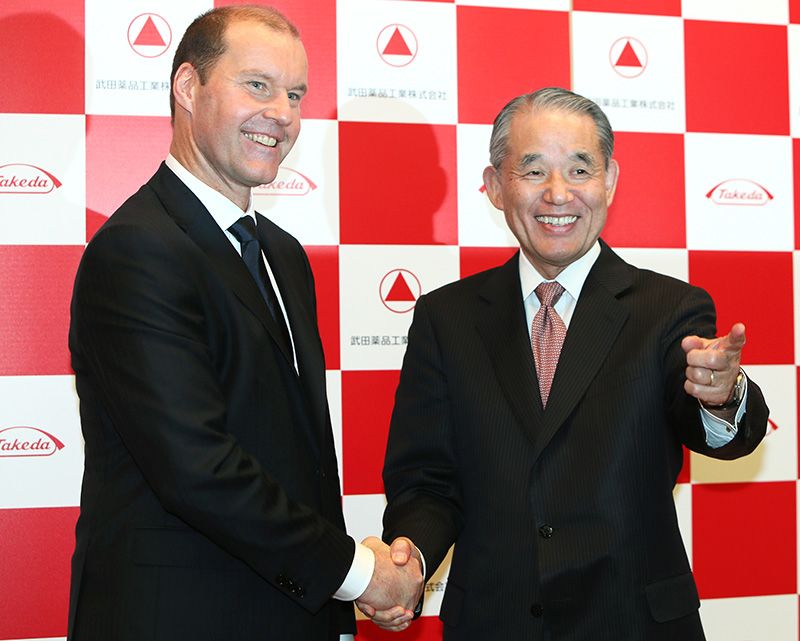 In June 2014, drug giant Takeda Pharmaceutical tapped Christophe Weber, an executive at GlaxoSmithKline, to take over as president and chief operating officer. Like Suntory, this 230-year-old corporation was a family-run company for most of its history. The appointment of a foreigner as its first “outsider” president has the business world and the media in a flutter.

Weber’s predecessor was current Chairman and CEO Hasegawa Yasuchika, who served as president for 11 years. Although not a family member, he was appointed from inside the company. During Hasegawa’s presidency, Takeda Pharmaceutical emerged as a major player on the international stage, making overseas acquisitions valued in excess of ¥2 trillion and adding non-Japanese members to its Board of Directors. Weber’s appointment can be seen as the culmination of this internationalizing trend.

Shiseido, one of Japan’s biggest and oldest cosmetics companies, turned its management over to an outsider last April, when Uotani Masahiko left Coca-Cola (Japan) to become Shiseido’s new CEO. Three years earlier, then President Maeda Shinzō had stepped aside to allow his close aide Suekawa Hisayuki to take over. But with performance slumping, Suekawa resigned after just two years, citing poor health, and Maeda stepped back in to fill the gap while he searched for another successor. Unable to find a suitable candidate within the company, he ultimately settled on Uotani, who had been working as a marketing advisor since April 2013.

Benesse Chairman and CEO Harada Eikō, appointed last June, was chosen for his extensive and varied experience, having previously served as president of Apple Japan and McDonald’s Japan. Hopefully Harada’s skills will help him cope with the fallout from the recent large-scale theft of Benesse customer data.

Benesse is Japan’s largest provider of distance education for children, but its recent performance has been lackluster. In 2003, founder Fukutake Sōichirō tapped Morimoto Masayoshi, a former Sony man who went on to head consumer electronics manufacturer Aiwa, to take over as president. Performance improved for a while, and Morimoto was hailed as a success, but he was obliged to resign in 2007, after reports of affairs with female employees appeared in the tabloid weeklies. Harada is Benesse’s second outsider chairman and CEO.

The reason these top executives are drawing so much attention is that outsider appointments of this sort have traditionally been the exception that proved the rule. In the past, Japanese companies only brought in executives when obliged to do so by extraordinary circumstances, such as a bank bailout or buyout necessitated by a financial crunch, or in cases involving the ”revolving door” appointment of retired senior bureaucrats. For example, after Renault stepped in as Nissan’s major shareholder when the latter fell into financial difficulties, it installed Carlos Ghosn as president and CEO to rebuild the ailing auto giant.

In these more recent cases, however, corporations have taken the initiative in headhunting outside executives known for their managerial achievements. So far only a small number of companies have broken with tradition in this way, but they have made a big splash in the process, being major players in their industries. The mass media call these hired guns “professional executives,” an ill-defined term suggesting someone who specializes in corporate management in general and can move easily between companies and even industries—a rare breed in Japan.

When American and European firms set out to select a new CEO or other top executive, they frequently ask their external directors to suggest candidates from both inside and outside the company. In the United States in particular, top managers move readily between companies. Big companies have no compunction about hiring CEOs from the outside, provided they meet the job requirements, or firing them if they underperform. Middle managers routinely switch companies in search of advancement. Market competition rules, as companies reward ability with promotions and raises, and managers at all levels go to the firm that promises the best salary and employment conditions. Underpinning this system is a business culture in which everything is decided by contract.

The situation is different in Japan. Although mid-career hiring is becoming more common, companies still rely heavily on mass recruitment of new graduates. Most large corporations hold an annual induction ceremony for the cohort of regular employees who will work side by side until they retire en masse. These are the company’s core employees, and it is taken for granted that its future leaders will be chosen from their midst. The thoroughly ingrained idea of the corporation as a family has been one of the traditional strengths of Japanese business.

Ironically, it is also the reason many companies are now in need of “professional executives.” Of course, homegrown executives are scarcely amateurs. But people who have spent virtually all of their adult lives working in a single company are inevitably molded by its structure, culture, and corporate philosophy. Under the lifetime employment system, executives chosen from within tend to be team players who all think alike. For this reason, internal appointees are rarely the best choice for companies that want to shake things up and adopt new business approaches.

Having grown rapidly through mergers and acquisitions, Suntory and Takeda Pharmaceutical now need to set their overseas operations on a new growth trajectory, and they have tapped outside talent for this purpose. Takeda has taken this one step further by choosing a foreign president with experience in emerging markets. Shiseido led the industry in marketing back when Japanese cosmetics were sold almost exclusively through department stores and brick-and-mortar cosmetics stores. But now that sales channels have diversified to include drugstores and e-commerce, Shiseido’s old approach is no longer effective. This is why it is betting on a marketing specialist with soft drink retailing experience. Benesse, a leader in distance education for schoolchildren, is facing the need to restructure its business as the population of young Japanese dwindles and competition from other types of education businesses heats up. For this it decided it needed leader who brings a new perspective to the job.

But Japan’s deeply engrained corporate culture also makes hiring an outsider a risky undertaking. It may be difficult for the new boss to gain acceptance. When jobs are for life, managers and employees tend to look on each other as members of the same family, sharing a common destiny. Top executives brought in from the outside need to work hard to gain the trust of employees and managers at all levels, or they may end up isolated and ineffective.

Niinami Takeshi was installed at Lawson by Mitsubishi Corporation after it became Lawson’s major shareholder. At Lawson Niinami was known as an autocratic leader, but in a press conference he gave after being named the next president of Suntory, he spoke carefully, saying, “Dialogue with the people working on the ground is more important than anything,” and “It’s vital to gain a broad base of support.”

At Japanese companies, outgoing presidents often continue to wield power in the position of chairman. Suntory owner-executive Saji Nobutada has said that when he is chairman he will work in tandem with Niinami. But if Saji assumes too large a role, he risks causing confusion by splitting the chain of command.

According to Takeda’s fiscal 2013 securities report, four Takeda directors, including Hasegawa, earned more than ¥100 million in 2013. The company’s two foreign directors, Yamada Tadataka (Japanese American) and Frank Morich (German) earned ¥835 million and ¥969 million, respectively. To be sure, these figures include retirement benefits from their former companies, Takeda subsidiaries, but even if those benefits are excluded, their compensation surpasses Hasegawa’s ¥305 million. These outsized salaries reflect the need to compete globally when recruiting from countries where the corporate culture is contract-based.

Takeda’s Weber is expected to receive a generous pay package as well. Although Takeda Pharmaceutical has announced plans to adopt performance-based pay, the salaries of managers who have risen up through the ranks will remain within the traditional limits, far below that of the 47-year-old Weber. For those who began as new graduates and have had to fight long and hard for each small step up the corporate ladder, it may seem like Weber is jumping the line. If such hiring practices continue, moreover, the prospects for eventually becoming president will virtually disappear for employees in the over-40 age group.

While the compensation of foreign executives seems extreme to many in Japan, the same market-driven logic governs the hiring of Japanese professional executives. Here, however, the inconsistency between such logic and the lifelong employment culture may well lead to a loss of employee morale. There are two ways to avoid this. Japanese corporations must either complete the switch to a fully Western-style corporate system and culture or devise a brand new form of management that successfully fuses Japanese and Western elements. A half-hearted approach will doom these new professional executives to the role of outsiders, capable of making a short-term contribution but unable to leave a permanent legacy.