Science Technology Society Lifestyle Dec 8, 2014
The deadly eruption of Mount Ontake shed light on the dearth of volcanologists in Japan. Underlying this state of affairs is a host of structural problems, including the tendency to disregard the geosciences, the incorporation of national universities, and the shortage of employment for researchers.

The September 2014 eruption of Mount Ontake, which straddles Nagano and Gifu Prefectures, became the worst volcanic disaster in post–World War II Japan in terms of casualties.

Mount Ontake is, in a way, the origin of volcanic research in Japan. Scholars were shocked when the volcano, believed until then to be extinct, erupted for the first time in known history in 1979. This prompted researchers to take a fresh look at volcanoes across Japan for their probability of eruption. Progress was made in geological surveys of surrounding areas, revealing that Ontake had seen at least four major magmatic eruptions in the past 10,000 years, as well as 11 phreatic eruptions like the latest one. The number of volcanoes in Japan recognized as active grew to 110, and the once-common expression shi-kazan, or “extinct volcano,” was removed from the lexicon of Japanese volcanology. These developments were the fruits of steady research efforts by volcanologists.

The government organ responsible for monitoring domestic volcanoes and predicting eruptions is the Japan Meteorological Agency. The JMA keeps around-the-clock watch over 47 active volcanoes using seismometers, tiltmeters to record minute vertical changes, cameras, and other equipment. It is far from being a corps of experts, though, as very few of its employees were volcanology majors in college. For this reason, university researchers have traditionally played a key role in volcanic disaster management.

One of the problems in dealing with volcanic disasters is that they tend to be prolonged events rather than transient episodes, making it difficult to predict how things will unfold. In past eruptions that greatly impacted local communities, such as those of Mount Unzen (Nagasaki Prefecture) in the 1990s and of Mount Usu (Hokkaido Prefecture) in 2000, researchers at local universities assessed volcanic activity and regularly provided advice to local governments. Residents trusted their wisdom as well.

Few employees and heads of municipal governments have intimate knowledge of volcanoes. Having close relations with researchers has helped them better understand official information from the JMA, which may be difficult to decipher. In some cases, researchers have been known to experience strong mental and physical stress from having to deal with residents’ demands to lift evacuation advisories, at times falling ill or continuing to keep vigil over volcanic activity even while receiving treatment for stress-induced medical conditions.

Following the eruption of Mount Ontake, Nagano Prefecture Governor Abe Shuichi observed, “We need to train researchers who are familiar with the characteristics of the mountain. It’s important to have someone like that around on a regular basis.” There is great societal demand for researchers who will act as “on-call doctors” to their local mountain. But this is becoming increasingly difficult today for reasons I outline below. Volcanic research and even disaster prevention are in jeopardy, and as such, on-call volcanic doctors are no more than a pipe dream.

According to the Ministry of Education, Culture, Sports, Science, and Technology, the number of professors, associate professors, lecturers, research associates, and fixed-term researchers engaged in volcano monitoring at universities in Japan has dwindled over the years to just 47. Italy, by contrast, has made it state policy to increase specialists. It has more than 150 today, although the defining criteria for a specialist differs somewhat from that of Japan. Japanese volcanologists have for many years self-deprecatingly called themselves a “40-student class” (in reference to the standard size of an elementary school class). But researchers claim that the actual number is now down to about 30 and that the day is near when there will be no “class” left to speak of.

Today, the only volcanoes that have regularly stationed researchers are Mount Usu, Mount Unzen, Sakurajima, Mount Aso, and Mount Kusatsu-Shirane. The University of Tokyo, for instance, used to assign instructors and technical associates to its volcano observatories in Kirishima, Izu Ōshima, and elsewhere, but nowadays these facilities are largely unmanned. No researchers were stationed at Mount Ontake, nor are there any on Mount Fuji.

Although the severity of this situation has been pointed out for many years, deep-rooted problems stand in the way of remedying it.

Lack of Career Options for Volcanologists

The first and foremost problem is the decrease in university students going into volcano research. This is due in part to the requirement that public university applicants take the National Center Test for University Admissions. It follows that few students study geoscience in high school, and the number of high school teachers in the subject is minuscule compared to those who teach physics, chemistry, and biology.

Moreover, volcanology majors have very few employment options available to them after graduation. Universities are generally cutting back on faculty positions, so there is little hope of pursuing a career in research. The so-called postdoc problem, in which postdoctoral scholars must continue research under insecure fixed-term conditions, is a serious issue not just for volcanology but for Japanese higher education as a whole. Seeing the plight of their predecessors, fewer and fewer graduate students are choosing to advance from a master’s degree to a doctorate in volcano research. “Some years,” laments one researcher at a national university, “the figure is only about ten percent.” Graduates cannot even hope to be hired on at the JMA as there are no openings specifically for volcanologists. 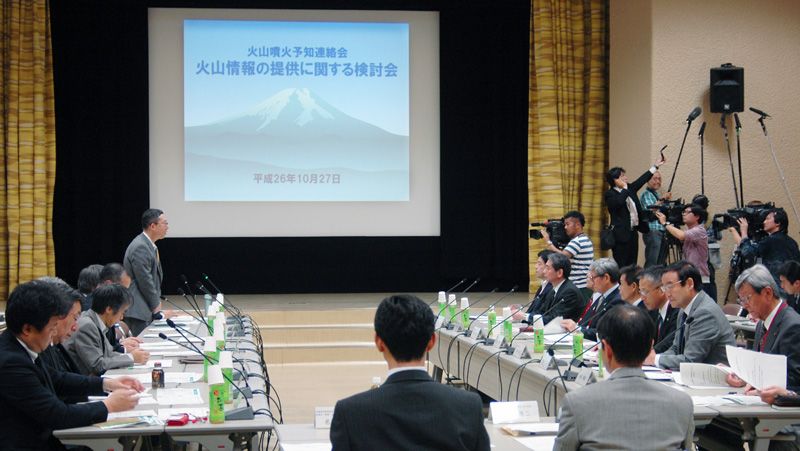 The Volcanic Information Review Group, set up by the Coordinating Committee for Prediction of Volcanic Eruptions in the wake of the Ontake eruption, holds its first meeting at the Japan Meteorological Agency in Ōtemachi, Tokyo, on October 27, 2014. © Jiji.

The incorporation of national universities in 2004 also dealt a blow to volcano research. The government has been whittling down its operational subsidies to incorporated national universities, and universities are in turn prioritizing efficiency and slashing research funds. Under the circumstances, researchers at each university are hard put to fill posts vacated by retired faculty and keep monitoring instruments in order. Meanwhile, the quantity of paperwork and meetings has greatly increased since incorporation. Researchers are now being asked to come up with results in a short period of time, despite the fact that seismology and volcanology often require many years of patient observation to compile valuable data and make new breakthroughs.

Research papers are the most obvious barometer of a researcher’s work. It is only to be expected that researchers would be disinclined from studying volcanoes that have not erupted in many years, and serving local communities as the go-to professional may not necessarily help improve their academic reputation. Many academics engaged in basic and steady research, including in volcanology, voiced their concern when universities were about to be incorporated, but society turned a deaf ear to them.

In 2008, given the tight conditions facing universities, the Ministry of Education selected key volcanoes on which to focus monitoring efforts. Of the 33 volcanoes monitored by universities, it reinforced surveillance of 16 of the more academically important volcanoes while leaving the remaining 17 to the universities’ discretion. Although Mount Ontake was not among the 16 chosen volcanoes, Nagoya University continued to observe it in the light of its small but intermittent eruptions in 1979, 1991, and 2007.

“It’s as if the volcanoes notice our absence.” This sentiment was voiced by researchers at the Volcanological Society of Japan’s convention, held in Fukuoka city, Fukuoka Prefecture, in November 2014. In Kagoshima Prefecture, Mount Shinmoe erupted in 2011 after the University of Tokyo shifted to unmanned observation, while a pyroclastic eruption occurred on Kuchinoerabu Island in August this year following the retirement of a Kyoto University professor who had monitored volcanoes in the prefecture for decades. The eruption of Mount Ontake in September also came after an authority on the volcano retired from his professorship at Nagoya University. The ranks of volcano watchers will only continue to decrease over time.

Meanwhile, societal demand for volcano researchers is growing. Guidelines compiled in 2008 by the Cabinet Office recommended that a disaster management council be set up per active volcano, with a researcher included in each. In the wake of the eruption of Mount Ontake, the government again said it would strengthen volcano monitoring. But in either case, Japan decisively lacks qualified individuals.

Setting Up a National Agency

Is there a way out of the current predicament, which had been seen coming over a decade ago? Researchers call for either a national institute for volcano research or an earthquake and volcano agency.

Japan does not have a national organ charged with conducting surveillance and studies of its volcanoes. Other countries with numerous active volcanoes, including Indonesia, Italy, and the United States, do, and these agencies serve as employment outlets for volcanology majors. The JMA and local governments should seriously consider welcoming young volcano researchers into their workforce as a way of creating job opportunities.

The situation is beyond the capacity of universities to remedy alone, and the government needs to step in. For a country that hosts 7% of the world’s active volcanoes, Japan happened to have an unusually small number of major eruptions in the twentieth century. It has been pointed out that massive events on a scale similar to the 1914 eruption of Sakurajima(*1) could occur five or six times during the twenty-first century.

In recent years the government has set up the Consumer Affairs Agency and Japan Tourism Agency, and a sports agency is also in the works. However, a national agency specializing in volcanoes is not high on the list of possible additions. It may take a massive eruption or the eruption of Mount Fuji to turn the tide, but it is questionable whether there will be any researchers left by that time.

(Originally published in Japanese on November 17, 2014. Banner photo: Men stand guard at a roadblock restricting access to Mount Ontake following the eruption. Photographed by the author at Ōtakimura, Nagano Prefecture, on October 7, 2014.)

(*1) ^ Beginning on January 12, 1914, the Sakurajima active volcano in Kagoshima Prefecture repeatedly erupted over a period of approximately one month, claiming 58 lives. The profuse lava flows are estimated to have totaled some 3 billion tons and overran one-third of the area of Sakurajima island. Roughly 10,000 residents were forced to move off the island.