An Imperial Princess for the Twenty-First Century

Society Culture May 22, 2015
The public is utterly smitten with Princess Kako of Akishino, second daughter of the emperor’s second son, who came of age and assumed her official duties late last year. While her beauty doubtlessly plays a part, the real source of her appeal is the inner grace and nobility of spirit passed on to her by Empress Michiko and the other remarkable women of the imperial household.

Princess Kako, the 20-year-old second daughter of Prince and Princess Akishino, has been riding a massive wave of popularity since her coming of age late last year. Perhaps the closest parallel is the “Mitchī boom” triggered by the 1958 announcement of the engagement of then Crown Prince Akihito (the current emperor) to Shōda Michiko (now Empress Michiko). As the first commoner ever to marry into the Japanese imperial family, Michiko brought a breath of fresh air and modernity to the venerable institution. The media carried story after story about “Mitchī,” whose youthful beauty and intelligence seemed to portend a brighter future for women all over Japan.

Today, in the Heisei era, the emperor’s granddaughter is doing what Michiko did in the preceding Shōwa era: injecting vitality and relevance into the imperial household even while preserving its hallowed traditions. The grace and natural refinement that have made her an “important cultural asset” have also transformed the young Princess Kako into a symbol of hope for the Japanese people.

On December 29, 2014, Princess Kako celebrated her twentieth birthday and made a formal appearance before the emperor and empress to take her place as a full-fledged adult member of the imperial family. On January 2, 2015, just four days later, she made her first appearance at the customary New Year’s Greeting event, when the emperor and his family appear before crowds of well-wishers at the Imperial Palace. Some 80,000 visitors poured into the palace grounds as Princess Kako’s debut fueled a surge of interest. It was the third largest turnout since 1989, the beginning of the current Heisei reign era. 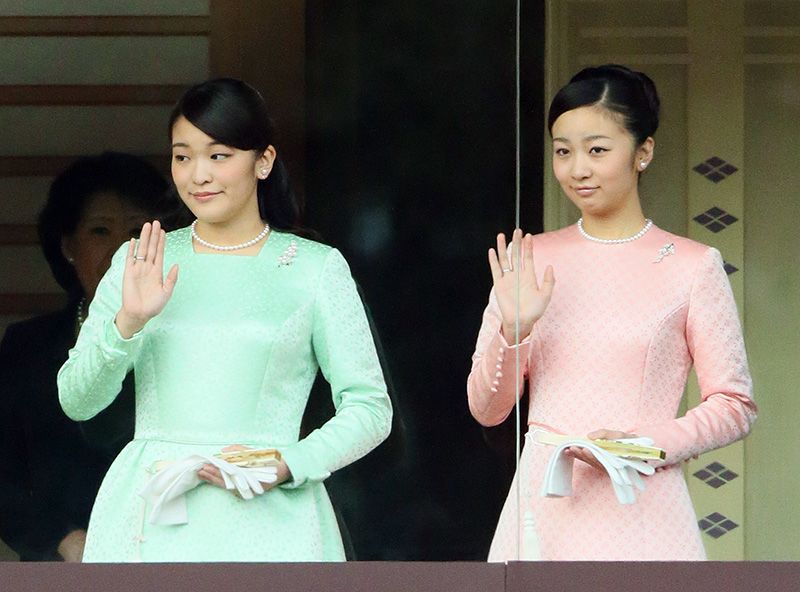 Princess Mako (left) and Princess Kako, the elder and younger daughters of the emperor’s second son Prince Akishino, wave to well-wishers during the annual New Year’s Greeting event at the Imperial Palace. (©Jiji)

Princess Kako was the picture of elegant poise and grace as she made her public debut in her official role. Appearing in light makeup and a long gown, she stood on the veranda of the Chōwaden Reception Hall beside her similarly attired sister Princess Mako, who was home on vacation from her studies overseas. Princess Kako’s look was pitch perfect for the sister of a future emperor (her younger brother Prince Hisahito is second in line to the throne) and for the new face of the imperial household, kindling hopes for the new year and a bright future.

As Japan’s oldest family, the imperial household represents a priceless cultural heritage that we should all work to protect. A unique cultural tradition is Japan’s elevated yet inclusive New Year’s Poetry Reading (Utakai Hajime), in which the imperial family gathers with other notables and members of the general public to recite original poetry in the Japanese style.

Beloved for her intelligence as well as her beauty, Princess Kako made a tasteful debut at this festive first poetry reading of the year, attired in a pale yellow gown and matching headband.

The theme of this year’s reading was hon (book or origin). Princess Kako’s poem spoke of her brother and mother, conjuring up images of warm domesticity:

Evenings when I read to my little brother,
I go to sleep with thoughts of our mother
Who journeys far from home.

By providing the nation with such a portrait of familial love and happiness, Princess Kako is already performing an important role as a member of the imperial household. 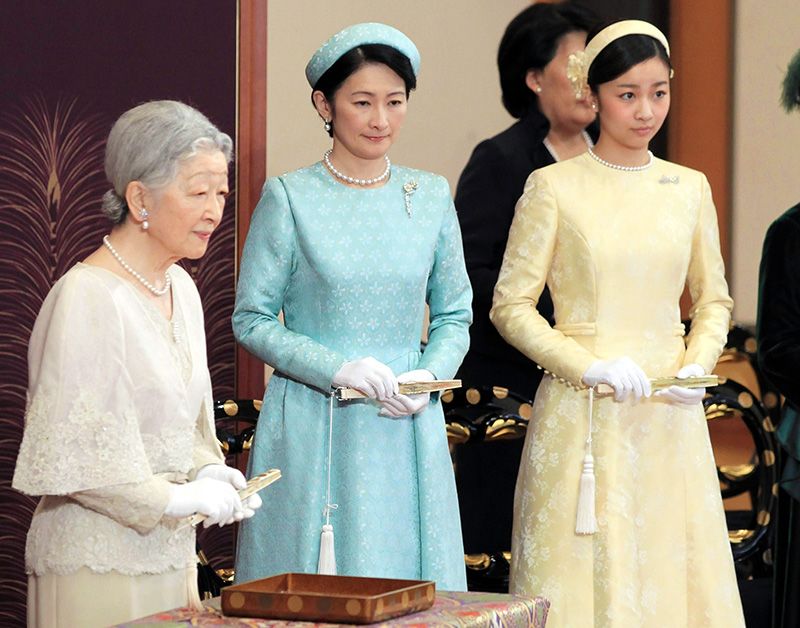 Empress Michiko with her daughter-in-law, Princess Kiko, and her granddaughter, Princess Kako, at the January 2015 New Year’s Poetry Reading in the Matsu-no-Ma hall of the Imperial Palace. (©Jiji)

At a news conference marking her coming of age on December 29, 2014, Princess Kako told the press, “I believe I should perform each of the tasks I humbly receive  with care and respect.” As far as I know, Princess Kako is the first female member of the imperial family to use the expression itadaita shigoto in reference to taking responsibility for her official duties. Intelligent, self-effacing, and eager to be of service to others, the articulate princess conveyed a mature awareness of her position as sister to the future emperor. She was also refreshingly forthright about her own character: “My biggest shortcoming is that I have a short fuse, just like my father. At home I often get into quarrels over minor things.”

Asked about marriage, the princess replied, “I’d like to eventually.” She characterized her ideal mate as “someone I can feel relaxed around.” Here, too, she communicated her attachment to her family and her healthy attitude toward family life in general.

As an adult member of the imperial family, Princess Kako will need to devote tremendous time and energy to her many official duties. Hers is a far more demanding job than most people imagine. But Princess Kako has been preparing for it since she was a small child, helping the emperor and empress grow rice inside the grounds of the Imperial Palace and assisting with the silkworm cultivation that has been one of the duties of Japanese empresses through the ages.

Meanwhile, Princess Kako has developed focus and persistence through her outside hobbies, figure skating and dance. She has distinguished herself particularly in the former sport, coming in first in her class in the Japan Skating Federation’s 2007 Spring Cup competition. Princess Kako’s slim, graceful figure is another benefit of her devotion to figure skating. In this and other ways, she has injected a contemporary sensibility into the imperial family even while honoring its traditions.

Princess Kako is known both for her active, energetic lifestyle and for her unusual independence and initiative. Last year, she made the personal decision to withdraw from Gakushūin University, the college of choice for members of the imperial family, and enroll at International Christian University. As the princess explained it, she was ready for a change of environment, having attended Gakushūin-affiliated schools since kindergarten. Appearing before reporters in a navy blue blazer and white blouse on April 2, 2015, just before attending ICU’s spring entrance ceremony, Princess Kako said, “I am grateful for the opportunity to begin student life anew, and I want to spend my time here meaningfully.”

Good breeding is not passed down in the genes. It must be cultivated through daily contact with good role models.

Princess Kako’s parents, Prince Akishino (Fumihito) and Princess Akishino (Kiko) will celebrate their silver wedding anniversary at the end of June this year. The engagement of the emperor’s second son to the commoner Kawashima Kiko was announced in September 1989, while the imperial family was still in mourning for Emperor Shōwa (Hirohito). I can still recall the news conference given by Kiko’s parents on that occasion. Describing his parenting style, Gakushūin University professor Kawashima Tatsuhiko said that he had tried to “give her freedom and a smile at all times.” But her mother Kazuyo had said, “I question giving [a child] too much freedom. I’ve raised her with a certain amount of discipline.” The tasteful refinement of Princess Kiko’s deportment is a testimony to the efficacy of her mother’s approach. Princess Kako, in turn, has tremendous respect for her mother. I suspect that Princess Kako’s statement about the duties bestowed on her reflects a certain amount of parental input.

Princess Kako is her mother’s daughter, as is so often the case. But I am convinced she has also benefited greatly from the example of other women close to her, modeling her behavior after such paragons of good breeding as her grandmother, Empress Michiko; her aunt, Kuroda Sayako; and her elder sister, Princess Mako. 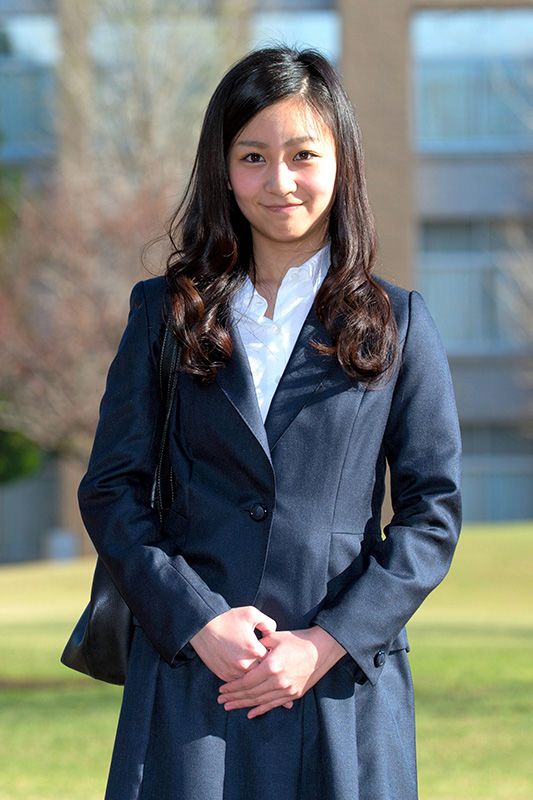 Princess Kako poses for the press corps on the campus of International Christian University prior to attending the university’s spring entrance ceremony. (© Jiji)

Princess Mako has been studying to be a museum curator for the past several years. She graduated from ICU with a degree in art and cultural heritage and is now enrolled in the University of Leicester’s postgraduate program in museum studies. She has a strong will and has always been a big sister that Princess Kiko could count on. No doubt Princess Kako has been inspired by her sister’s determination to pursue a career.

Kuroda Sayako (formerly Princess Nori), the current emperor’s daughter and Princess Kako’s aunt, was the first princess to assume official duties within the imperial family. During her 15 years as an adult member of that household (from the time she came of age until her marriage in 2005), she attended 740 functions at the Imperial Palace and represented the imperial family at eight events overseas. When she was participating in the long “memorial walk” held to commemorate the sixth anniversary of the 1995 Great Hanshin Earthquake, her staff urged her to ride part of the way, but the princess overruled them, saying, “That would make it pointless. I came here to walk.” Her integrity made a deep impression as she continued walking after dark, side by side with victims of the quake. As children, Princesses Mako and Kako were very attached to their “Nēne” ―their older sister, as they called her. Princess Nori’s deep commitment to her official duties was a valuable example to them as they were growing up.

Then, of course, there is Empress Michiko.

In 1955, as a second-year student at University of the Sacred Heart in Tokyo, Shōda Michiko entered a Coming-of-Age Day essay contest sponsored by the daily Yomiuri Shimbun and placed second out of 4,185 contestants. She donated half of her prize money (¥2,000) to the newspaper and the other half to the president of the university, Mother Elizabeth Britt, to use on scholarships.

That happened two years before Michiko entered the media spotlight as the first commoner to marry a crown prince of the imperial household, but the story epitomizes the nobility and generosity of spirit by which the empress has always distinguished herself. And she has passed that spirit on to her grandchildren. After the Great East Japan Earthquake of March 2011, Princesses Mako and Kako traveled to the stricken area and remained there assisting volunteers with relief efforts.

Both princesses are known for their proficiency in foreign languages, and we can expect them to put those skills to good use during the 2020 Olympic Games in Tokyo. Their presence is sure to inspire the Japanese people with an extra measure of energy and optimism. I look forward to watching them on the international stage, breathing youthful vitality into Japan’s imperial institution while preserving its traditions as the new face of Japan’s oldest family.