Kiryū Yoshihide has potential that is unmatched among Japanese male sprinters today. In April 2013, as a 17-year-old high school student, he ran the 100 meters in 10.01 seconds—the all-time second best time in Japan—at the Mikio Oda Memorial International Amateur Athletic Game. In March 2015 Kiryū, by then enrolled in Tōyō University, ran a wind-aided 9.87 seconds to victory at a Texas meet, defeating London Olympics fifth-place finisher Ryan Bailey of the United States.

Kiryū’s 100-meter sprint largely diverges from that of his Japanese predecessors in the way he accelerates from around the 30-meter point—corresponding, in terms of car driving, to the part between shifting from second to third gear and going up to top gear. Virtually no one can keep up with him when he is at his best; Kiryū may well be capable of running neck and neck with athletes from track and field powerhouses like Jamaica. And he is only 19 years old. We can look forward to seeing him compete alongside the world’s top sprinters at the 2020 Tokyo Olympic Games and beyond.

Unlike sprinters of African descent, most Japanese sprinters do not lift their legs very high when running. Arising from differences in pelvic tilt and musculature, this running form causes the upper body to sway.

Kiryū, meanwhile, has good arm swings and controls his upper body skillfully to move his legs at a fast stride rate. His notably broad torso suggests good core strength, and he appears to possess highly developed iliopsoas, the muscles responsible for propelling the legs forward.

These are the secrets to Kiryū’s remarkable speed. In terms of technique, though, the young athlete is far from sophisticated: there is a lot of superfluous movement going on, such as his hands flailing and his body becoming unsteady in the final stretch. He is obviously not harnessing his physical ability to its full potential.

It is commonly said that sprinters begin approaching the 10-second mark only after they have achieved more technical refinement. Observing Kiryū’s sprinting technique, I would expect him to run at about 10.20 seconds, yet he manages to clock close to 10.00 seconds. Thus far, he is relying mostly on his innate ability—another sign that he still has plenty of room for growth.

Many athletes experience a temporary drop in performance when they enter college and face a new training environment. Kiryū has made a smooth transition in that regard, and his skills have improved since his high-school days, when he marked a 10.01.

Achieving a sub-10-second record is no easy feat, even a wind-aided one: if a sprinter picks up too much speed with the help of a tail wind, he will have difficulty carrying his legs forward. Kiryū’s wind-aided 9.87 is the result of his having been able to keep up with the speed. As far as improving his record goes, all he needs to do is work on his technique. It may be only a matter of time until Kiryū officially breaks the 10-second barrier.

Kiryū had his 2015 sights set on the IAAF World Championships to be held in Beijing, but he injured his right hamstring during practice on May 30. Having been prescribed six weeks of rest before resuming training, he skipped the Japan Athletics National Championships, which took place in Niigata Prefecture from June 26. His participation in the World Championships is now looking iffy as well.

There are two conceivable reasons for Kiryū’s susceptibility to injury. One is that his nerves are wired for speed but his muscles are not keeping up with the strain. If not that, then an imbalance of some sort in his sprinting form may be stressing specific parts of his body, contributing to injury.

The former can be remedied by further training, whereas the latter would require careful analysis and fine adjustments. If, for instance, the athlete has a certain tendency in the way he runs that may lead to injury, it needs to be identified and corrected. This is a highly complex process when it comes to athletes competing at the top level, as minute movements in unexpected parts of the body could be causing stress and pain in the muscles of another region. It is vital that the athlete and coach work through the problem together.

Improving Conditioning and Management Skills Key to the World

On May 30, 2015, Su Bingtian of China became the first Asian-born male to officially run under 10 seconds when he marked a 9.99 at the third meet of the IAAF Diamond League held in Oregon. While Su beat Kiryū to that record, the question of who got there first or how high one ranks compared to others does not actually matter much. Far more important for the athlete is whether or not he can achieve results at the largest of stages—namely, the quadrennial Olympic Games and the biennial World Championships.

These are the goals toward which I hope Kiryū will work. As I trust he is well aware, breaking the 10-second barrier will be no more than a milestone in his career, and I hope that he will make a goal of racing in the Olympic finals.

Thus far Kiryū has achieved solid results only in the months of April and May. To perform more consistently he will need to master peaking, the skill of adjusting one’s condition to peak at crucial moments. 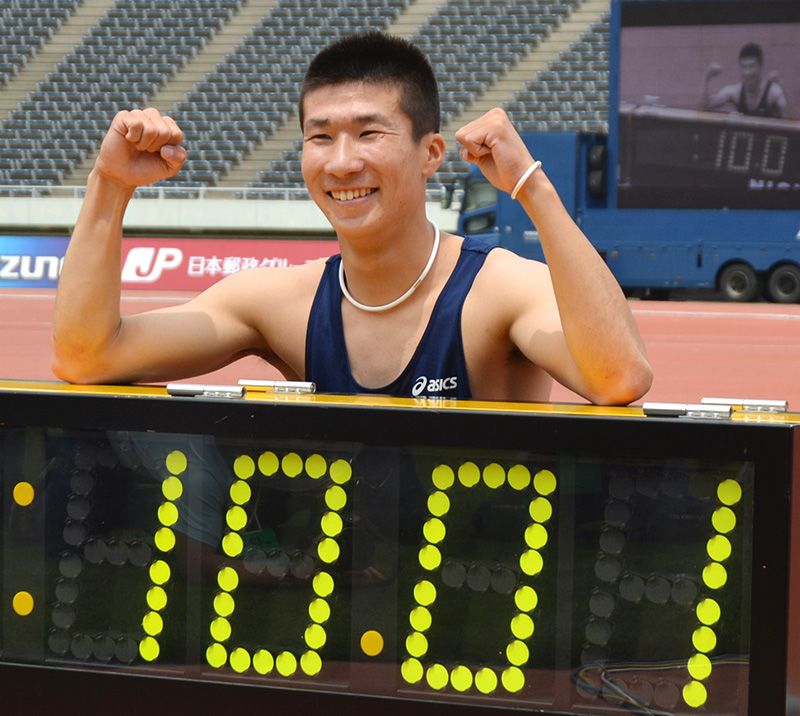 Kiryū Yoshihide poses with the clock on April 29, 2013, after tying the world junior record and setting a new national junior record in the men’s 100 m preliminaries at the Oda Memorial meet, held at Edion Stadium Hiroshima. (© Jiji)

Another skill that Kiryū needs to work on is self-management over the 48 hours during which the preliminary, semifinal, and final rounds of a competition take place. The objective in the first two heats is to run without getting knocked out. A sprinter only needs to give the best performance in one out of three heats. The fastest of sprinters will not be able to win if his ability to run at that speed is fragile; self-management in a race means getting through the preliminaries while conserving energy.

There is also the matter of warming up mentally for a competition. Kiryū needs to be able to perform at his best under immense pressure as many fellow Japanese closely follow the race. Acquiring such nerves of steel will call for mental training and putting a good deal of gritty competition experience under his belt.

Kiryū has already proven his immense physical potential, but he has yet to demonstrate his potential in the other aspects given above—the keys to competing at the global level. These are the skills that he must work on from here on.

Facing the Tokyo Olympics at Age 24

Being only 19 years old, Kiryū will likely have close to 10 chances in total to compete on the big stage of the Olympic Games and World Championships. Conversely, though, it can be said that his opportunities to learn and gain experience competing at the highest level are limited. For now, the best reference point toward which he can aim to reach peak performance is the Tokyo Olympics, at which time he will be 24 years old. If, by then, he is able to clock under 10 seconds purely on his own ability and grasp something of the secret to running at that speed, he may be on his way to further greatness.

He would still have a good chance of improving his records even after the Tokyo Olympics. Asahara Nobuharu, bronze medalist in the men’s 4 x 100 m relay at the Beijing Olympics, was 29 years old when he achieved his career best of 10.02 seconds, the third best time in Japan.

If Kiryū were to break the 10-second barrier, it would influence the mind-set of other athletes as well. By 2020, I hope that two or three Japanese athletes will have achieved sub-10-second times and be competing with rivals from around the world at the Tokyo Olympics.

(Originally written in Japanese and published on June 26, 2015. Banner photo: Kiryū Yoshihide of Tōyō University, right, runs alongside Justin Gatlin of the United States in the men’s 100 meters at the Seiko Golden Grand Prix at the National Stadium in Tokyo on May 11, 2014. © Jiji.)