Politics Society Culture Aug 31, 2015
The United Nations Educational, Scientific and Cultural Organization (UNESCO) has bestowed a World Heritage designation on 23 sites that figured in Japan’s modernization and industrialization. Arima Manabu, who served on the Expert Advisory Committee for the Kyūshū-Yamaguchi World Heritage Nomination, examines the significance of that designation.

On July 8, UNESCO’s World Heritage Committee officially added 23 Japanese locations, under the collective heading “Sites of Japan’s Meiji Industrial Revolution: Iron and Steel, Shipbuilding and Coal Mining,” to its registry of World Heritage sites. All of the locations figured prominently in Japan’s rapid modernization and industrialization of the late nineteenth century. Here is a review of the rationale for bestowing World Heritage recognition on the sites in question.

The shogunate, panicked by the 1853 arrival of Commodore Matthew Perry’s US naval squadron, built the Nirayama furnace to make cannon. Completed in 1857, the smelter produced serviceable big guns. On the other hand, Hagi’s smelter, built by the Chōshū domain, began operation in 1856, but it appears to have been an unsuccessful prototype. The Shūseikan complex, built by the Shimazu domain on Western lines in the early 1850s, included production facilities for iron, ships, and textiles.

Among the less well known sites added are the Hashino iron mine and smelter ruins in Kamaishi, Iwate Prefecture, and the Mietsu Naval Dock in Saga, Saga Prefecture. The Morioka domain built the Hashino smelter, which comprised three blast furnaces, in the late 1850s, and the site has benefited over the decades from careful preservation work.

In contrast, Saga’s Mietsu Naval Dock had survived only as an entry in historical documents. The Saga domain constructed the Mietsu Naval Dock in the early 1860s to repair and build ships, and the dock launched the Ryōfūmaru, Japan’s first fully operational steamship, in 1865. The dock apparently closed in the 1870s, but the precise date is lost to history. Excavation work in connection with the World Heritage candidacy unearthed its timber foundations in the Chikugogawa river delta. 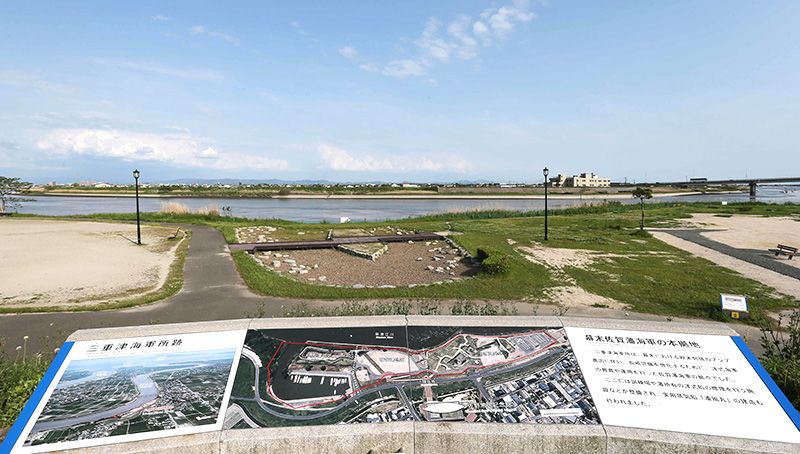 Another site that has suffered from neglect is the Hashima Coal Mine, on the eponymous island popularly known as Gunkanjima (Battleship Island) in Nagasaki Prefecture. Japanese demand for coal declined as government policy steered electric utilities and other large users to oil, and the Hashima Coal Mine ceased operation in 1974. All of the residents thereupon left the island, and it has since remained uninhabited and largely unmaintained. Mitsubishi Materials, the owner of the mine, deeded the island gratis to the municipality of Takashima (now part of Nagasaki City) in 2001. Not until the turn of the century did citizens’ groups begin agitating to recognize the mine as a cultural asset.

Some of the Meiji Industrial Revolution sites have remained at least partly in continuous use. Two examples are the former Imperial Steel Works, now Nippon Steel & Sumitomo Metal’s Yawata Works (Kitakyūshū, Fukuoka Prefecture), and Mitsubishi Heavy Industries’ Nagasaki Shipyard. While determining how to preserve abandoned and deteriorating sites is a recurring challenge in the World Heritage regimen, determining how to reconcile World Heritage designations with continuing use by private-sector owners is another issue altogether.

Linking 23 diverse sites scattered across a broad swath of geography to evoke Japan’s industrialization was a novel and worthwhile endeavor. Japan’s collective listing differs strikingly from the individual listings for industrial sites of singular and compelling significance, such as Germany’s Zollverein Coal Mine Industrial Complex.

The German complex qualified for a listing on its own as “remarkable material evidence of the evolution and decline of an essential industry over the past 150 years” and as an example of “20th-century buildings of outstanding architectural merit.” Conversely, bundling several Japanese sites was an effective way of conveying how Japan’s industrialization unfolded through encounters with the West and through technological trial and error.

Japan’s Meiji Industrial Revolution qualified for a World Heritage listing as the first instance of industrialization in a non-Western nation. The World Heritage application was a valuable opportunity to articulate the importance of Japan’s industrialization in the context of world history. This was the first-ever official effort by Japan to detail that importance comprehensively and convincingly for a non-Japanese audience.

I served as a member of the Expert Advisory Committee for the Kyūshū-Yamaguchi World Heritage Nomination. That committee oversaw the preparation of the materials submitted in support of the World Heritage application for the Meiji Industrial Revolution sites. The tone and content of our deliberations were illustrative of the subtle differences in perspective between Japanese and non-Japanese, even among well-informed authorities. I will relate some examples.

The non-Japanese members of our committee viewed Japan’s industrialization as a process of encounters with the West, including military conflict, and the absorption of Western technology. In respect to Japan’s encounters with the West in the 1850s and 1860s and to Japan’s subsequent initiatives to industrialize, the Japanese and non-Japanese committee members were in full agreement. Our agreement was less robust, however, in regard to including the castle town of Hagi in the application.

Hagi was the site of the headquarters of the Chōshū domain. Chōshū’s leadership was proactive in acquiring Western technology and was in the vanguard of the revolution that brought down the Tokugawa shogunate and launched the Meiji Restoration. Hagi was also the site of a private school run briefly by Yoshida Shōin in the late 1850s. Historians credit Yoshida, an intellectual firebrand, with laying the philosophical groundwork for the Meiji Restoration. Some of his students went on to play leading roles in the restoration, though Yoshida was executed by the shogunate in 1859.

The non-Japanese committee members were more enthusiastic than the Japanese members about including Hagi in the application. That reflects the somewhat greater emphasis that they placed on the role of Western technology in the Meiji Industrial revolution. Hagi’s logical positioning in the rationale for the World Heritage listing is secondary. The castle town became part of the application not because of the presence there of any historical evidence of the Meiji Industrial Revolution but because of Chōshū’s role in establishing a framework for importing and assimilating Western technology.

Another difference in nuance between the Japanese and non-Japanese committee members was geographical. The initial working name for the proposed World Heritage sites was “Emergence of Industrial Japan: Kyūshū-Yamaguchi World Heritage Sites” (as reflected in the name of our committee). That exhibited an implicit assumption about the geographical focus of the proposal.

Japanese have a well-ingrained understanding of the central role played by the Satsuma, Saga, and Chōshū domains of Kyūshū and Yamaguchi in the Meiji Industrial Revolution. We learn as schoolchildren how the leaders of those powerful domains recognized early the military threat posed by the West and took the initiative in assimilating Western technology, especially military technology. So the Kyūshū-Yamaguchi focus comes to us instinctively.

The non-Japanese committee members, unencumbered by Japanese preconceptions, viewed the proposal in a broader, national context. Thus did our committee end up including the Hashino Iron Mining and Smelting site, in Iwate Prefecture, and the Nirayama Reverbatory Furnace, in Shizuoka Prefecture.

Adopting a national perspective was more than just a matter of looking beyond Japan’s domestic geopolitics of the mid-nineteenth century. The principle of universal value is a core criterion for UNESCO in evaluating World Heritage applications. Framing the application in a national context underlined the universal value of Japan’s experience in becoming the first non-Western industrial power.

The Personal Dimension of Industrialization

The Meiji Industrial Revolution sites newly added to the World Heritage registry epitomize the crucial contribution of mining and manufacturing to Japan’s modernization. Japanese employment in those sectors has declined steadily, however, to less than 25% of the nation’s working population. Retailing and other service sector industries, along with other such nonmanufacturing industries as information and communications and financial services, have become Japan’s leading employers by far.

People today are prone to view such sites as former coal mines as relics of another era. Yet an understanding of those sites’ historical role is indispensable in coming to terms with Japan’s industrial and economic evolution. And imparting that understanding to future generations will depend on preserving the sites, which will require substantial expenditure. So the question now is whether a consensus will coalesce in support of making the necessary fiscal commitment.

The Hashima Coal Mine offers an arresting example of the challenge of preservation. Sightseeing vessels carry tourists around Gunkanjima to provide a look at the massive concrete buildings there, and some unload passengers onto the island for a closer look. A few of the buildings, which include former housing for the miners and their families, have collapsed, and others are on the verge of collapse. Preserving all of the remaining structures is likely to be impossible on account of fiscal and architectural obstacles. Curiously, the specter of impending collapse is part of the site’s tourist appeal, which complicates the challenge of preservation.

Some responsible for determining the fate of the Hashima Coal Mine appear prepared to countenance the collapse of more buildings there. We have yet to hear a formal argument for that approach, however, from individuals engaged in preserving cultural properties, from historical researchers, from architectural experts, from government agencies, or from citizens’ groups.

In fact, we have seen no progress of any kind in regard to forging a consensus about preservation priorities, guidelines, methodology, or funding. Forging that consensus will entail reconciling a complex web of diverse interests. It will therefore require determined perseverance, but it is indispensable to fulfilling the responsibility that we have undertaken in securing the World Heritage designation for the Hashima Coal Mine.

We face a similar challenge in the sensitivities about foreign workers, especially Koreans, employed at some of the Meiji Industrial Revolution sites. Sir Neil Cossons, who chaired the Expert Advisory Committee for the Kyūshū-Yamaguchi World Heritage Nomination, has addressed that issue convincingly. Cossons notes that military applications have been part of the development of heavy industry in every industrialized nation and that discrimination and repression have been, however unfortunately, part of industrialization nearly everywhere.

While acknowledging the facets of industrialization cited by Cossons, let us recognize that the driving force in industrialization has lain elsewhere: in the fervent desire of ordinary people to secure better lives for themselves and for their progeny. Let us recognize our debt of gratitude for the lives we enjoy today to the labor and ideas invested by our forebears. Let us recognize humbly how little we really know of their lives at and away from work. And let us strive through the World Heritage protocol to better illuminate the personal dimension of our industrial history.

(Originally written in Japanese and published on July 29, 2015. Banner photo: A shipboard tourist snaps a shot of the Hashima Coal Mine buildings. © Jiji.)