Politics Economy Society Oct 8, 2015
The August 2015 restart of the Sendai Nuclear Power Plant in Kyūshū ended a two-year shutdown of all nuclear reactors in Japan. As commentators debate whether this will prompt other plants around the country to come back online, the current administration appears unwilling to take responsibility for dealing with contradictions between the need to shut down aging facilities and the nation’s continued reliance on nuclear power.

On August 11, 2015, Unit 1 of Kyūshū Electric Power’s Sendai Nuclear Power Plant reached criticality. This marked the first restart of a Japanese nuclear power plant under a new safety regime instituted—in July 2013 by the Nuclear Regulation Authority—following the March 2011 Fukushima Daiichi disaster. The resumption of operations at the Sendai plant was a closely watched event, marking Japan’s return to nuclear power after a two-year hiatus.

Many Japanese news organizations predicted at the beginning of 2015 that nuclear energy would make a full-fledged comeback during the year, with operations resuming at Sendai and other nuclear plants one after another. The projections appear to have been slightly too hasty, however, as restarting reactors has proved to be more difficult than anticipated.

For one thing, public opinion polls reveal that more people oppose the restart of the Sendai plant than favor it, although a sizable share of respondents say they are unsure. The interesting thing about the poll results is that, upon close inspection, they reveal contradictory sentiments regarding nuclear energy.

When asked what nuclear policy Japan should pursue, respondents most frequently choose the option of going nuclear-free over the long term. This response is far more popular than either the immediate elimination of nuclear energy or the continued reliance on it into the future. This means that most people support the use of nuclear power for the time being.

But when asked whether they support the reactivation of nuclear plants over the short term, the majority said no; not allowing plants to resume operations, though, in effect means an immediate freeze. How should this contradiction in long- and short-term public opinion be interpreted?

The disparity suggests that while many people are willing to accept a certain degree of reliance on nuclear energy for the foreseeable future, they dislike the way the Abe Shinzō administration has addressed this issue. They believe that the NRA and the utilities are being asked to deal with all the problems in restarting the plants, with the administration seeking to shoulder as little responsibility as possible and to attract the least attention. It is a view that has provoked a public backlash, resulting in a strong negative response when asked whether they favor the restart of specific nuclear reactors.

The administration’s low sense of responsibility is revealed by the new Long-term Energy Supply and Demand Outlook, approved by the Ministry of Economy, Trade, and Industry in July 2015. The outlook foresees nuclear power accounting for 20%–22% of Japan’s sources of electricity in 2030, with renewables accounting for 22%–24%, liquefied natural gas 27%, coal 26%, and oil 3%. 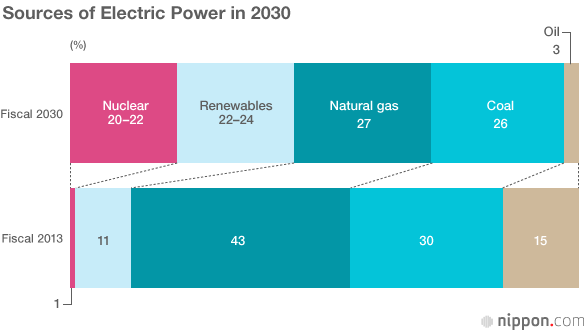 The outlook was drafted on the basis of the Strategic Energy Plan, adopted by the cabinet in 2014. But inasmuch as the plan explicitly states that “Japan will minimize its dependency on nuclear power,” it can hardly be said to be consistent with the plan’s goals.

The 2012 revisions to the Act on the Regulation of Nuclear Source Material, Nuclear Fuel Material, and Reactors require all nuclear power plants to be taken out of service after 40 years, with a one-time-only, 20-year extension being granted in exceptional cases when certain conditions are met. The maximum number of years that a plant can remain in operation is thus 60 years. Of the 48 reactors in Japan as of January 2015, only 18 will be under 40 years old at the end of December 2030. If the revisions are strictly enforced, 30 reactors will need to be decommissioned by then. Two reactors are currently under construction—Unit 3 of Chūgoku Electric Power’s Shimane Nuclear Power Plant and Electric Power Development’s Ōma Nuclear Power Plant—but even if they come online, that would still mean just 20 reactors as of the end of 2030. Assuming that these 20 units operate at 70% capacity (which was roughly the average prior to the Fukushima accident), they would only be able to generate 15% of the nearly 1 trillion kWh projected to be required in 2030.

If the 40-year rule is applied strictly, nuclear power will meet just 15% of the nation’s energy needs in 2030. The additional 5%–7% needed to meet METI’s 20%–22% outlook is thus premised on either building new reactors or extending the life of existing ones beyond 40 years. Since the administration has announced that it has no plans now to build additional reactors, one can then conclude that it intends to cover the 5%–7% shortfall by extending the life of existing plants.

The 30 reactors slated to go out of service by 2030 under the 40-year rule include Kansai Electric’s Mihama Unit 1 and 4 others that the utilities already decided this year to decommission, along with the 4 reactors at Fukushima Daini Nuclear Power Plant that the Fukushima prefectural government strongly wants shut down. So of the remaining 21, quite a high share (around 15) will need to have their life extended to meet the 5%–7% differential.

With so many reactors requiring an extension, the 40-year life of nuclear plants will become the exception, rather than the rule. Such a distorted application of the Reactor Regulation Act and the government outlook of nuclear power meeting 20%–22% of the country’s energy needs are hardly consistent with the Abe administration’s vow to “minimize” the country’s nuclear dependence.

If the government intends to rely on nuclear power—in however small measure—into the future, it must do everything possible to minimize the dangers. The surest way of doing this is to use only the newest equipment.

If nuclear is to play a role in Japan’s energy future, the responsible thing to do would be to replace aging facilities with the latest equipment on the same site. The administration has thus far avoided making explicit references to undertaking replacements, though, and appears satisfied with quietly extending the life of existing facilities. This is sure to invite the criticism that it intends to keep the nuclear industry alive, without sticking its neck out by openly saying so.

The reticence regarding replacements, of course, is due to the administration’s stated policy of minimizing the country’s reliance on nuclear power—in keeping with public expectations. Replacing aging facilities would raise suspicions that the government is not serious about phasing out nuclear power. Even if it does replace older plants, it should move the decommissioning process forward and aim to reduce nuclear dependency to 15%. Construction of new facilities within a framework of as low a reliance on nuclear energy as possible is the only responsible path for future use of nuclear energy.

The government will surely be severely condemned by the public if it thinks it can continue to depend on nuclear power to meet the nation’s energy needs by simply extending the life of existing reactors—despite its pledge to minimize such dependence and without updating those facilities. If the government shirks responsible debate on this issue, nuclear power is unlikely to provide even 15% of the energy supply in 2030, let alone the 20%–22% target it set for itself.

The resumption of operations at Kyūshū Electric’s Sendai plant thus will not trigger a spate of restarts at other plants, and 2015 is hardly likely to mark the full-fledged return of nuclear power in Japan.