Science Technology Society Oct 16, 2015
Japan is home to 10% of the world's active volcanoes, and a surge in small-scale volcanic activity has had the nation on edge in the wake of the 2011 Great East Japan Earthquake. We talked to Nakada Setsuya, one of Japan’s leading volcanologists, about the recent spate of eruptions and its implications. 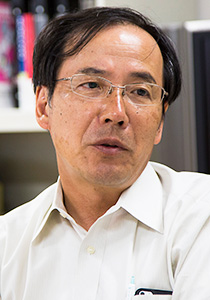 Professor of volcanology, Earthquake Research Institute, University of Tokyo, specializing in volcanic geology and petrology. Born in Toyama Prefecture in 1952. Earned his PhD from Kyūshū University. Currently serves as vice-chair of the Japan Meteorological Agency’s Coordinating Committee for Prediction of Volcanic Eruptions.

INTERVIEWER There’s been a surge in the number of volcanic eruptions in Japan over the past couple of years. What’s your take on all this activity?

NAKADA SETSUYA First let me explain my perspective on volcanic activity. There’s a certain regularity to volcanic eruptions. Small ones occur very frequently. Gigantic eruptions like the one that formed the Mount Aso caldera occur only once in 10,000 years or so. The fact that a volcano hasn’t erupted in a long while doesn’t mean that volcanic activity has ceased. The pressures continue to build, and eventually the volcano has to erupt to compensate.

The VEI [volcanic explosivity index] measures the explosive energy of volcanic eruptions based on the volume of material ejected. It’s an 8-point scale, with each successive interval representing a tenfold increase in energy. A VEI-4 eruption is classified as large, while a VEI-5 or VEI-6 eruption is considered very large or colossal. In Japan, VEI-5 eruptions typically occur a few times per millennium, while the average frequency for VEI-4 eruptions is once in roughly 30 years.

Overall, Japan’s volcanoes have been ominously quiet for the past two or three centuries. The last VEI-5 eruption was almost three centuries ago, around 1730 [Mount Tarumae in Hokkaidō]. And there hasn’t been a VEI-4 since the eruption of Mount Hokkaidō-Komagatake in 1929.

It’s important to understand that at some point that energy has to be released. What we really need to be concerned about are VEI-4 and VEI-5 eruptions. Volcanologists are keeping a very close watch because they believe Japan is overdue for an eruption on that scale.

The eruptions we’ve seen lately are really minuscule by comparison. The recent Mount Aso eruption was a VEI-1, and so was the eruption of Mount Ontake last year [see chart below]. A cluster of small-scale eruptions like this isn’t sufficient grounds for concluding that we’re entering a period of intense volcanic activity.

However, it is true that since 2014, these small eruptions have been occurring with greater frequency than in the previous few decades. I have a feeling that this could be the prelude to a period in which Japan may be prone to larger-scale eruptions. 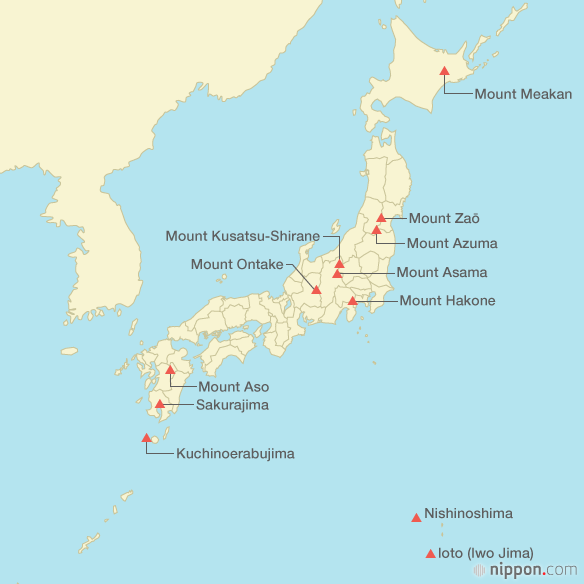 Moreover, one of the characteristics of volcanic events is that even relatively small eruptions can be quite devastating. In the late eighteenth century, Japan experienced a succession of volcanic eruptions that claimed more than 16,000 lives in a period of less than 20 years—and this when the countryside was far less populated than it is today. It helps one appreciate how quiet our volcanoes have been since then.

INTERVIEWER   Do you think there’s some relationship between the Great East Japan Earthquake and the volcanic activity we’ve seen over the past couple of years?

I know a lot of people out there believe there’s a direct connection, and perhaps there is. But the relationship between earthquakes and volcanic eruptions is by no means clear. There’s the well-known case of the 1707 eruption of Mount Fuji, which began just 49 days after the Hōei earthquake. But even there, we can’t prove a cause-and-effect relationship.

An earthquake could “shake up” the magma beneath a volcano, but so far, no one has documented an instance of an eruption triggered by that sort of shaking. Four years ago, after the Great East Japan Earthquake, a group of 20 active volcanoes centered on the Tōhoku region began registering seismic activity. But not one of those volcanoes has erupted. On March 15, an earthquake occurred directly beneath Mount Fuji, but there was no eruption. So my impression is that no amount of shaking is going to cause a volcano to erupt if it isn’t ready to erupt to begin with. 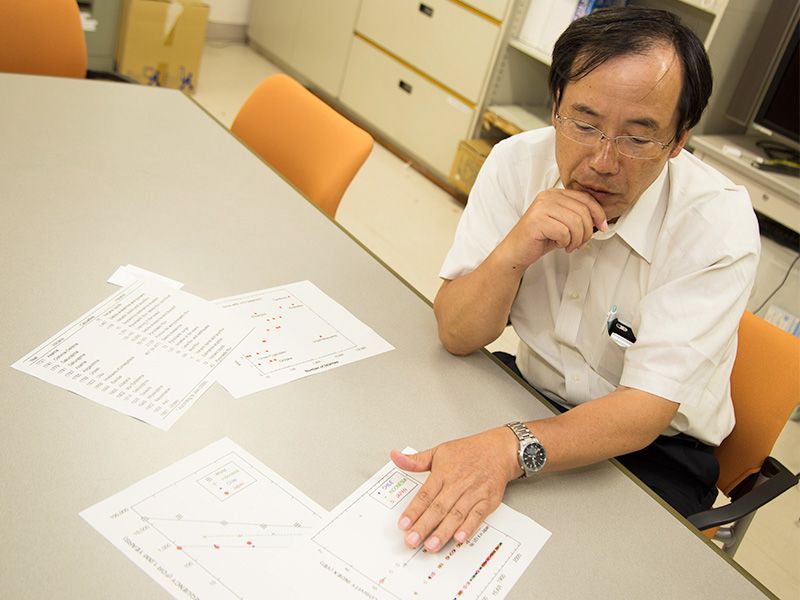 Another way in which an earthquake could theoretically trigger a volcanic eruption would be if a fault slip caused a readjustment of stresses that altered the pressure on a pocket of magma. Presumably, that could allow volatile material in the magma to separate and form bubbles, which could build up pressure and lead to an eruption. But any eruptions that might occur under this scenario should happen fairly quickly. Japan hardly experienced any eruptions for three years after the Tōhoku quake, and the volcanoes that have erupted since 2014, such as Mount Ontake, Nishinoshima, and Mount Aso, are pretty far from the epicenter of the Tōhoku earthquake. A fault slip of 50 meters or so off the northeast coast isn’t going to have a significant impact on crustal stresses as far away as Kyūshū.

I think earthquakes are seldom the cause of volcanic eruptions. The Hōei earthquake may have helped trigger the eruption of Mount Fuji, but only because Mount Fuji was ready to erupt anyway.

Impact of Major Volcanic Events in Japan (1700s to present)

There are some volcanoes, like Miyakejima and Mount Usu, that simply have to erupt once every few decades. The magma accumulates, and when a certain amount builds up, the pressure pushes it out, causing an eruption. Some volcanoes erupt with that kind of regularity, and in those cases, once the magma has been released, no amount of shaking by an earthquake is going to trigger another eruption.

Mount Fuji hasn’t erupted for more than 300 years, so it’s difficult to know what sort of schedule it might be on. But there have been a number of great earthquakes affecting the region, and the only one that seems to have triggered an eruption was the Hōei earthquake. The Great Jōgan eruption of Mount Fuji [846–66], which produced the huge Aokigahara lava flow, seems to have been connected in some way with the 869 Sanriku earthquake, but the eruption occurred five years before the temblor.

The increase in the frequency of eruptions in the Kyūshū region might go back to the eruption of Mount Kirishima, which started a month and a half before the quake. Rather than posit a direct causal connection between the eruptions and the quake, I think it would make more sense to hypothesize that the tectonic plates under Japan are under particular stress, causing instability in the earth’s crust and making us prone to both earthquakes and eruptions.

Keeping an Eye on Mount Fuji

Are there ways to tell if a volcano is ready to erupt? It’s very worrying to hear people say that Mount Fuji is sure to erupt again at some point.

NAKADA As far as Mount Fuji goes, things have been pretty calm of late.

When we monitor volcanoes, we look at seismic activity, ground deformation, electric and magnetic fields—because a high-temperature liquid rising through the mountain will alter the electric conductivity. The easiest to monitor are seismic activity and crustal deformation.

We used to rely on GPS to monitor crustal deformation, but recently we’ve been analyzing direct satellite data. By comparing three-dimensional topographical data at one-month intervals we can determine if any section of the mountain is bulging or collapsing. This has helped tremendously in alerting us to topographical changes that occur before an eruption. For example, prior to the Mount Hakone eruptions that began last June, we were able to detect deformations affecting an area of about 100 meters square, which would never have been possible using GPS. We now have access to this sort of detailed data for any volcano in Japan, so if there’s anything unusual going on, we can spot it right away. We’ve been watching volcanoes like Sakurajima and Mount Fuji continuously.

The frequency of the tremors under Mount Fuji increased a bit in the wake of the March 2011 Tōhoku earthquake, but now it’s pretty much back to where it was before the quake, and there’s no other sign of unusual activity. Prior to an eruption, there’s always some sort of change, however small. As long as we’re monitoring a volcano closely, we’ll catch it.

The difficulty lies in guessing how soon after that an eruption is likely to occur. The changes could come a day beforehand, or they could come a week or two months in advance—we just don’t know. But we’ve come a long way from the days of when a major eruption could catch us completely off guard. With today’s equipment and technology, that’s extremely unlikely.

(Translated from an interview by staff editor Ishii Masato; photos by Ōtani Kiyohide. Banner photo: Smoke and ash billow from Mount Shindake on the island of Kuchinoerabujima, Kagoshima Prefecture, in a photo taken by a local resident on May 29, 2015. © Jiji .)