The Great East Japan Earthquake of March 2011 caused more than 18,000 tsunami-related fatalities, and since then Japan has been buffeted by a series of other major natural disasters. Landslides resulting from torrential rain in Hiroshima Prefecture claimed over 70 lives in August 2014. The following month, Mount Ontake, a volcano in central Honshū, erupted suddenly, resulting in 63 killed or missing. It was the worst toll from a volcanic disaster in the seven decades since World War II. And in September this year, heavy rain from a typhoon caused the Kinugawa to burst its banks in Ibaraki Prefecture, quickly flooding homes and farmland across a large area in the city of Jōsō and elsewhere. 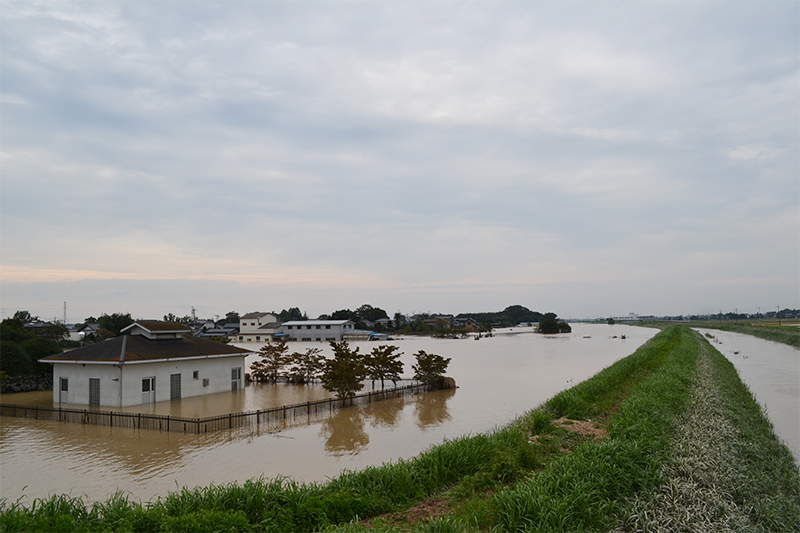 A scene from Jōsō, Ibaraki Prefecture, after the Kinugawa (right) burst through an embankment in September 2015. (Photo by Furukawa Takehiko.)

JMA provides a variety of weather forecasts, including hour-by-hour pinpoint predictions, one-day and two-day forecasts, and weekly and monthly outlooks. Whenever an earthquake happens, the agency almost immediately reports on the hypocenter and the seismic intensity in locations throughout the affected area, and within a few minutes it announces whether there is a danger of tsunamis; if so, it announces the time frame of their expected arrival. The agency also has an early-warning system that transmits alarms via television, radio, and mobile phone networks to those in surrounding areas before the seismic waves arrive. In addition, it uses ships, buoys, and coastal wave gauges to monitor currents and predict wave heights.

People tend to think of JMA as the agency that provides weather forecasts. Relatively few are aware of the scope of its services, the monitoring systems and forecasting technologies on which they are based, or the agency’s organization and budget.

A Broad Range of Services

Today’s Japan Meteorological Agency had its beginnings in 1875 with the establishment of the Tokyo Meteorological Observatory as an organ of the Home Ministry. It had fewer than 10 employees, working under the direction of a foreign expert. In 1887 it was renamed Central Meteorological Observatory, and in 1895 it was transferred from the Home Ministry to the Ministry of Education. After World War II it was placed under the Ministry of Transport, and in 1956 it was upgraded to agency status. Under the sweeping reorganization of the central government implemented in 2001, the agency became an an extra-ministerial bureau of the Ministry of Land, Infrastructure, and Transport (now the Ministry of Land, Infrastructure, Transport, and Tourism), as are the Japan Tourism Agency and the Japan Coast Guard. Throughout its history, the organization has been directed and staffed almost exclusively by professional experts; in this respect it is exceptional within the Japanese bureaucracy.

Today’s JMA concerns itself with natural phenomena of all sorts, not just in the air but on land and at sea as well. In addition to its regular weather forecasting service, it provides forecasts for civil aviation, and it deals with floods, landslides, earthquakes, volcanic activity, and tsunamis. It also monitors atmospheric carbon dioxide and the ozone layer.  This broad reach is unusual. By contrast, the National Weather Service of the United States devotes itself basically just to the weather, as do Britain’s Meteorological Office and the meteorological agencies in China and South Korea.

The activities of the agency are defined by the Meteorological Service Act. This law was adopted in 1952, the year the postwar occupation ended. The following year Japan became a member of the World Meteorological Organization, a specialized agency of the United Nations. (Japan’s admission to the United Nations itself was three years after this, in 1956.)

A Nationwide Network Operating Round the Clock

JMA also has regional headquarters in six locations, and these are responsible for a total of 50 local meteorological offices. These offices each have about 30 employees working in shifts around the clock to conduct daily operations, such as issuing forecasts and warnings. They also monitor ground-level atmospheric conditions, including temperature, pressure, and wind. 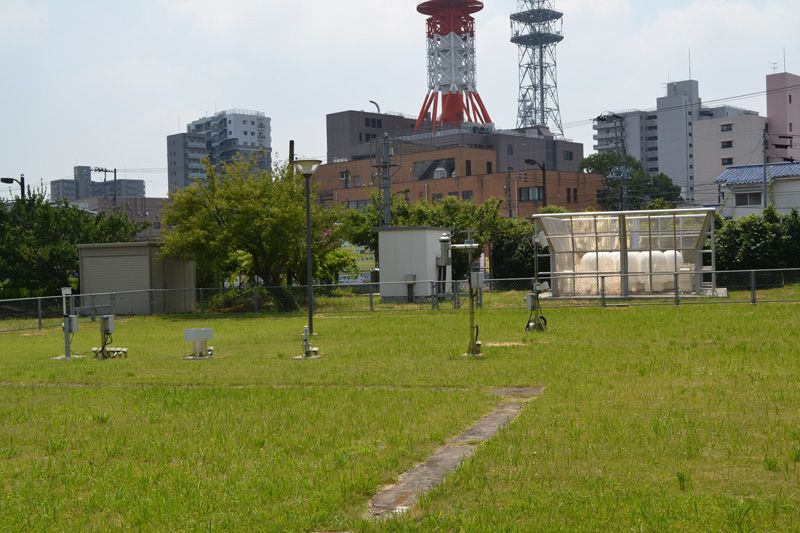 The agency has about 5,200 employees and an annual budget of around ¥60 billion, of which about 40% goes for equipment-related costs.

JMA has long been a leader in the use of advanced information technology. In the mid-1950s the agency introduced weather radar, which can constantly monitor the location of precipitation, and built a network of radar stations covering the whole country. In 1974 it started operating AMeDAS (Automated Meteorological Data Acquisition System), a system for the automatic routine gathering of weather-related data. The agency now has AMeDAS stations operating at some 1,300 locations across Japan. 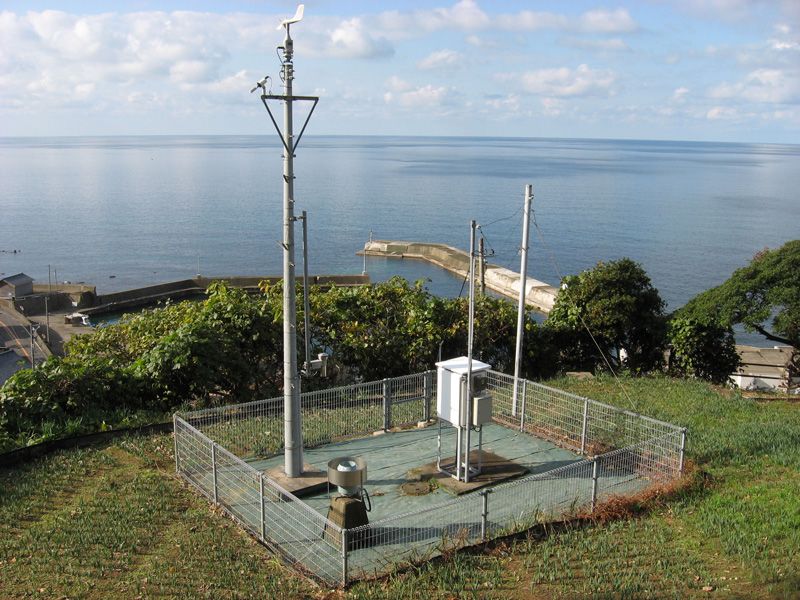 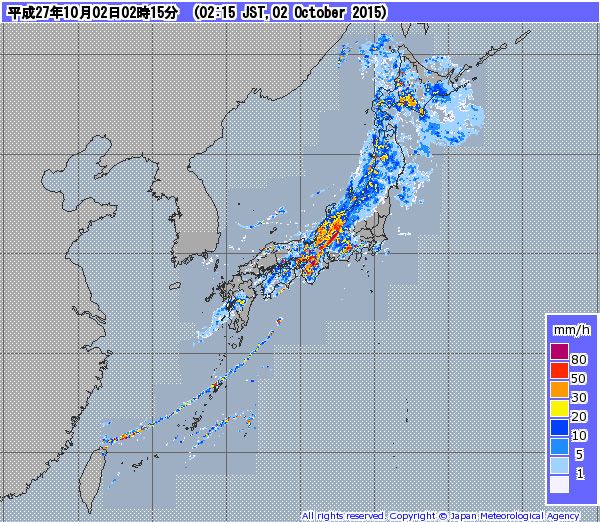 By combining the data from weather radar and AMeDAS stations, JMA can provide real-time information about current precipitation and forecasts for the next few hours, presented in easy-to-view maps.

JMA also uses radiosondes, radio-equipped devices that are borne by balloons to altitudes of up to 30 kilometers, where they measure pressure, temperature, humidity, and wind. These single-mission instruments are released daily from 16 locations around the country. 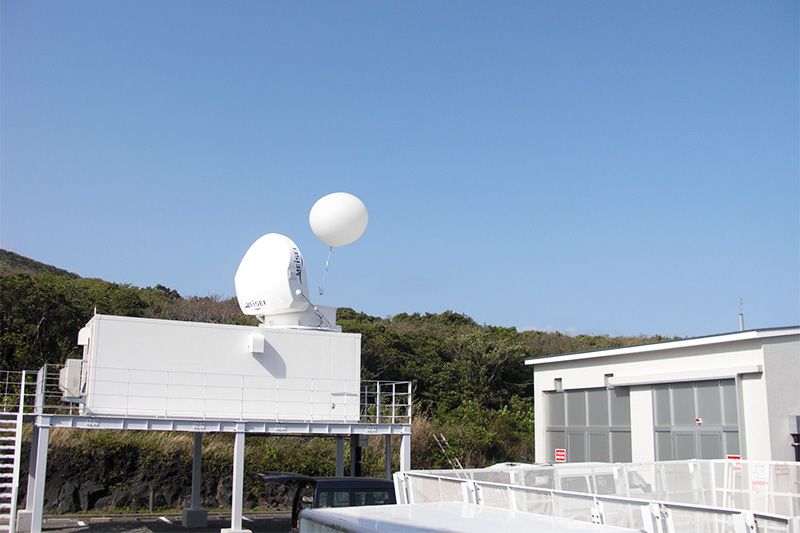 A radiosonde for upper-air observation is carried aloft by balloon from a station on the island of Hachijōjima. (JMA) 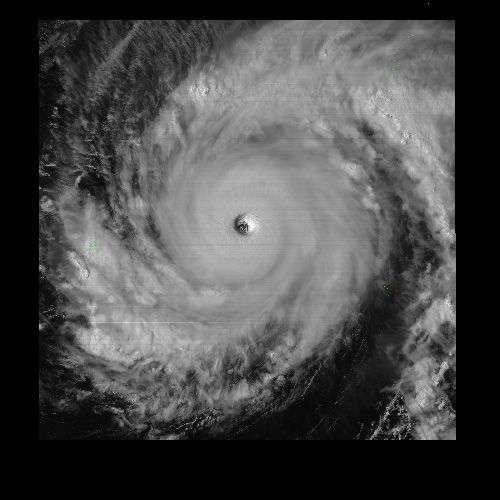 An image from Himawari 8 showing a typhoon with a clearly defined eye. (JMA)

In 1977, JMA launched its first Himawari meteorological satellite, and this summer it started operating its eighth. These satellites, positioned in geostationary orbits some 35,000 km above the equator, are indispensable tools for observation of typhoons and other phenomena, and the data from their images concerning surface temperatures and cloud movements is essential for numerical weather prediction, a subject to which I will return below.

As the basis for its earthquake early warnings and tsunami warnings, JMA uses data from its network of seismometers and seismic intensity meters around the country, along with earthquake and tsunami observation instruments attached to undersea cables. The agency processes the data using its Earthquake Phenomena Observation System in Tokyo and Osaka, based on which it determines the hypocenter and issues tsunami warnings as required.

Room for Both Supercomputers and Humans 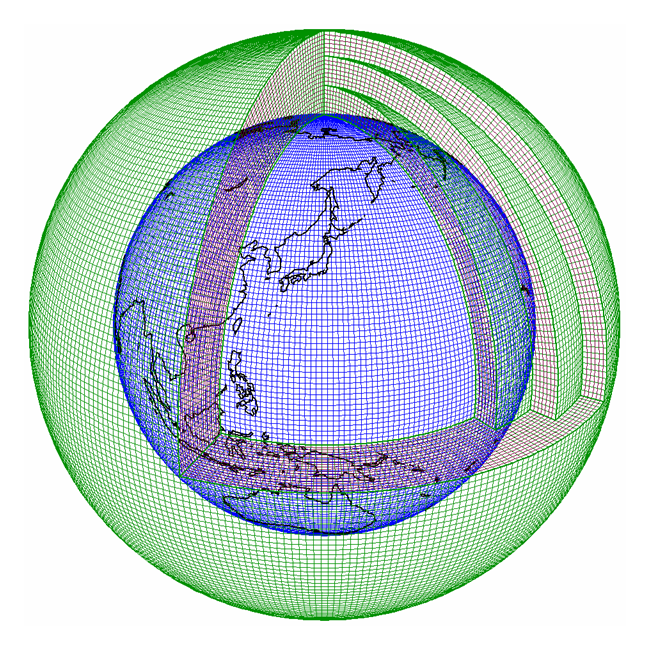 A grid covering the entire globe for use in numerical weather prediction. (JMA)

From the start of Japan’s weather service in the nineteenth century through the mid-1970s, weather predictions were based on the subjective judgment of meteorologists looking at weather maps. But advances in meteorological science and observational technologies and, above all, the development of supercomputers capable of quickly performing huge numbers of calculations made it possible to create numerical weather prediction models based on physical principles.

Numerical weather prediction starts with the input of day-to-day observation data for each of the cells in a grid covering the globe, as shown in the chart below. It takes a supercomputer about an hour to calculate the information on expected temperature, pressure, wind, and precipitation that serves as the basis for weather forecasts. Thanks to the use of this simulation technology, weather forecasting has changed from a subjective undertaking to an objective mathematical process. All of JMA’s meteorological predictions, including short-term forecasts and expected paths of typhoons, are now based on this technology.

Computers cannot do it all, though. One major change relating to JMA was the introduction of the system of certified weather forecasters in 1993. These forecasters are now working at about 60 private-sector weather companies. National examinations are held twice a year for candidates, and the cumulative total number of examinees topped 170,000 as of the forty-fourth examination this summer. About 6% pass on average, and the total number who have won this qualification is slightly less than 10,000.

But job openings are scarce, and the number who are actually working as forecasters is probably far short of 1,000.  There is a need for additional employment opportunities to allow these people to put their knowledge to work, such as by supporting disaster-prevention activities at the local government level.

In August 2013, JMA introduced a new system of “emergency warnings.” The agency has long issued warnings and advisories concerning heavy rain and other abnormal natural phenomena. The new designation was adopted with the aim of strengthening this warning system in the face of global warming and the increasing frequency of torrential rains and other types of extreme weather. Issued by local meteorological offices to municipal governments, emergency warnings indicate a level of danger far exceeding the normal warning criteria. The system is designed for these special warnings to be issued in the case of phenomena like heavy rainfall with a level of intensity observed only once every few decades. As part of JMA’s increased emphasis on disaster countermeasures, local meteorological offices are also strengthening their support for municipal authorities through the provision of direct advice to the responsible employees on the issuance of evacuation advisories and evacuation orders by municipal government heads.

In closing, I would like to touch on JMA’s international cooperation. In addition to operating its Himawari meteorological satellites as part of a global information-sharing system, the agency hosts a number of regional support centers, including a regional typhoon center and volcanic ash advisory center, and it dispatches employees to work at the World Meteorological Organization headquarters in Geneva. Japan provides around 10% of the WMO’s annual funding, a share second only to that of the United States. JMA also participates in the drafting of the reports of the International Panel on Climate Change concerning global warming. International cooperation is essential to the practice of meteorology.