Professional Baseball at the Crossroads: A Decade After Its First Players Strike

Economy Society Dec 8, 2015
More than a decade has passed since plans to merge the Osaka Kintetsu Buffalos and Orix Bluewave were unveiled, a move that threw Japanese professional baseball into turmoil by instigating the sport’s first-ever players strike. The author considers how far efforts at reform have come since then.

Dark Clouds: A Year of Scandals and Financial Woes

Eleven years have passed since 2004, when an array of issues came to the fore to challenge the stability of professional baseball in Japan. The crisis began when Nippon Professional Baseball proposed that the financially strapped Kintetsu Buffalos be merged with Orix BlueWave.

Owners looking to close the revenue gap between the Central and Pacific Leagues then threw their weight behind a proposal to join the two leagues and play the season with 10 teams. The players union, the Japan Professional Baseball Players Association, opposed both proposals, arguing to keep the dual-league, 12-team system. With no agreement in sight, players walked out mid-season in the sport’s first-ever strike.

The standoff ended in a victory for the players union (as well as the majority of fans), with the two-league system remaining intact and owners agreeing to create a new franchise, the Tōhoku Rakuten Eagles, to fill the void made by the merger of Kintetsu and Orix.

While the events surrounding the strike stole the headlines, NPB’s woes did not end there. News broke that the Yomiuri Giants, Hanshin Tigers, and Yokohama Baystars (now DeNA Baystars) provided cash and presents—deemed living expenses—to several college players. The payments, which took advantage of a draft regulation in place at the time allowing university and corporate league players to name the team of their choice in the annual draft, ran afoul of the draft charter and resulted in the owners and presidents of the clubs being forced to step down.

To compound matters, the owner of the Seibu Lions proffered his resignation in the wake of a major accounting scandal at the club’s parent organization, the Seibu Railway Group. Then there was the issue of cash-strapped Daiei selling its stake in the Fukuoka Hawks franchise to mobile phone provider Softbank. With the league reeling, the NPB and players union jointly established the Professional Baseball Structural Reform Council to introduce restructuring measures.

From the viewpoint of the fans, the reform having the biggest impact over the last decade was the introduction of interleague games. Central League clubs were no longer the only beneficiaries of the massive popularity of the Yomiuri Giants; Pacific League team, too, gained increased exposure, bolstering local support for clubs based in such far-flung cities as Sapporo, Sendai, Chiba, and Fukuoka.

Top stars, including Darvish Yū, who now pitches for the Texas Rangers of Major League Baseball in the United States, and fastball progeny Otani Shōhei of the Hokkaidō Nippon Ham Fighters have helped raise the league’s popularity close to the level long enjoyed by the Central League.

Along with interleague play, other restructuring demands made by the players union in 2004 were:

Of the six demands, reforms to the draft system have been most closely tracked by fans. Under the current structure, a lottery is held to determine negotiating rights if multiple clubs choose the same player in the first round. Subsequent rounds, though, utilize a waiver-style system, with selection going in reverse order starting with the last-place team from the league with the fewest wins in interleague play.

Enabling all 12 clubs to make a simultaneous bid for a player in the first round can be considered a fair reform, as it prevents a hypothetical situation under the waiver system where a struggling team might throw the remainder of the season to gain the first pick in the draft. While highly unlikely, the appearance of a standout amateur prospect triggering such a case is not entirely implausible.

The NPB and players union were unable to see eye to eye on the luxury tax and television rights, but negotiations on a number of other points produced amicable results for both sides and assured the successful restructuring of Japanese professional baseball.

(Created by the Nippon.com editorial department.)

Reforms Breathe Life Back into the Sport

The introduction of a luxury tax has been looked at as a way to raise the means of financially struggling teams. The reason for the tax has traditionally centered on the Yomiuri Giants, whose popularity has historically endowed it with unrivaled financial clout. Recently, however, avid support for regional teams such as Rakuten in the Tōhoku area and Softbank in Kyūshū, along with the appearance of financially savvy parent companies has lifted the economic fortunes of many ball clubs to levels comparable to or even higher than the Giants. As a result, the once avid calls for adopting a luxury tax have largely waned.

Japan’s size can also be seen as a factor in dwindling support for the measure. In the Major Leagues, a luxury tax has been instigated as a way to help regional clubs remain competitive against teams in densely populated cities like New York, Los Angeles, and Chicago. It is hard, however, to make a comparable argument for Japan considering its smaller area and, to an extent, the ease with which people can travel between urban centers.

Even without the tax, the stature of professional baseball has by and large remained on a steady upward course since the crisis of 2004. Fans have returned, largely in part to back-to-back World Baseball Classic titles in 2006 and 2009 by national teams stocked with professional players. This newly won support has helped the NPB safely weather challenges to its integrity, including the internal tumult at the Giants front office in 2011 and a 2013 scandal involving balls designed to be more lively than established standards—leading to more home runs.

While the fortunes of professional baseball have undoubtedly changed for the better since 2004, it is unclear if reforms have placed the sport on the road to growth and development. While many question where the sport is heading, it is unclear if anyone in the top echelons can provide an answer.

When I began covering baseball in 1974 the Major Leagues had 24 teams, with regional pennant races unfolding among 6 clubs in each of the Eastern and Western Divisions of the National and American Leagues and culminating in the World Series. Since that time, the MLB has grown to 30 teams and added a third Central Division to each league. 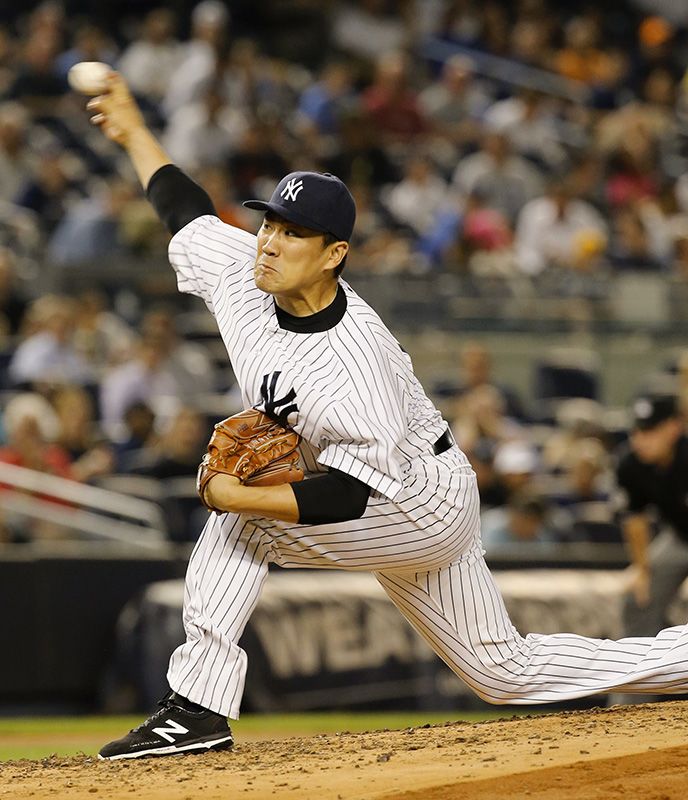 Tanaka Masahiro pitches for the New York Yankees on September 8, 2015. Tanaka moved to the Yankees in 2014 after posting a perfect record in the regular season with 24 wins on his way to helping Rakuten capture its first Japan Series pennant in 2013. (© Jiji)

On the other hand, NPB has held fast to the same dual-league, 12-team system for nearly 60 years. The MLB over the same period went from two leagues with 16 teams to its present make up, adding organizations in Canada, expanding its minor league system to include Central and South America, and filling its rosters with players from every corner of the world.

If the changes to baseball in the United States can be considered an expansion of the sport, then the situation in Japan has to be called stagnant. Attendance has without a doubt increased, nearly tripling (some would argue quadrupling as early numbers were often padded) from 9 million to 23 million since the inception of the current league system in 1958. But there is little reason to believe figures will increase beyond the current level, having remained flat over the last decade.

Boosting attendance is important, but it pales in comparison to the greater issue of whether the NPB commissioner or team owners are willing to take a page from the MLB’s strategy book and try to develop the league.

The MLB has taken a business approach to spreading its brand of baseball around the world, with an eye to reaping profits as the popularity of the sport grows. Professional teams in Japan, however, are property of their parent company and are used by and large for promotional purposes, to bolster the company’s image, and to boost sales of company products. The sole focus is on the domestic market and at present there is no thought of expanding the Japanese baseball brand to the baseball-friendly markets of South Korea, Taiwan, China, and Australia. In fact, the NPB is so thoroughly dominated by the massive Yomiuri media group, whose business interests fall firmly within the Japanese-speaking realm, that it does not even acknowledge the value of developing the domestic brand beyond Japan’s borders.

The strangle hold by media groups extends beyond Yomiuri, though, and includes the Asahi Shimbun, sponsor of the hallowed national high school baseball championship held each August, and the Mainichi Shimbun, backer of the country’s main amateur league. The result has been an overemphasis on maximizing profits, and, in the absence of the type of sports journalism that might take up the question of the future of baseball, a steady exploitation from the professional to high school levels by parent companies as well as schools.

As a result, many of Japan’s top players are looking across the Pacific and are being snapped up by Major League teams. Some may cite the Pacific League setting a new attendance record in 2015 and the Central League posting the largest figures since numbers began being announced in 2005 as evidence that alarm is out of place. But conspicuously absent from this stance is any hint of how to steer the resounding success of the domestic league toward new fields of expansion. In the end, one is left to wonder what all the fuss over reforming the sport in 2004 was about in the first place.

Weighing the measures and reforms needed to ensure the future of Japanese baseball is the province of journalism. However, media companies must first relinquish their influence from the business side of the sport. Only then will we start to see the path ahead.

(Originally written in Japanese and published on November 20, 2015. Banner photo:The Fukuoka Softbank Hawks celebrate with fans at the Meiji Jingū Stadium after winning the Japan Series on October 29, 2015. © Jiji)