Society Lifestyle Mar 2, 2016
In a bid to reverse the damage to community ties wrought by the increase in single and two-person households over the past three decades, a growing number of people in Japan are embracing collective living arrangements in an echo of the global “sharing economy.”

Over the past 30 years, Japan has seen a dramatic shift away from three-generational homes toward single-person households. The cost of increased privacy and independence has been worsening isolation and social alienation. The rise in sharehouses, which have come a long way in Japan since their initial incarnation as grotty digs for transitory foreigners, signals an appetite for a revival of community ties.

Japan may have arrived late to the sharehouse trend, but it has created a range of inventive communal homes reflecting diverse lifestyles, from penniless urban artists to farming fanatics and young parents. Many of the 2,800 sharehouses across the country unite people in a common interest, whether coding, climbing, or crocheting, or answer the needs of underserved members of society, such as single mothers and the elderly.

Sharenest in Yokohama is one of the new breed. Initiated in 2013 by real-estate agent Sakai Yōsuke, who wanted to re-create the warm atmosphere and wholesome cooking he associated with his own grandmother, it offers a service called Obāchan (Grandma) Concierge. Ino Junko, a 62-year-old woman with two young grandchildren of her own, comes to the house three times a week to cook dinner, clean the living room, and do the laundry. Like twenty-somethings around the world, the six residents are grateful to come home to a nutritious dinner and freshly laundered clothes rather than instant ramen and no clean socks.

“I love it when they leave me notes saying ‘That was great, thank you!’ No one ever says a real ‘thank you’ after dinner at home,” says Ino. “It’s made my domestic work into a real job. I feel more energetic and lively just coming here.”

Services for the Vulnerable

Chronic loneliness is a major problem among people over 65, who will account for a third of Japan’s population by 2025. Many live alone, and that trend is set to get worse as the number of elderly people increases: single-person dwellings are expected to account for almost 40% of Japanese households by 2035, according to the National Institute of Population and Social Security Research. Multigenerational sharehouses, where unrelated newborns and 90-year-olds share a common space, may be one answer. 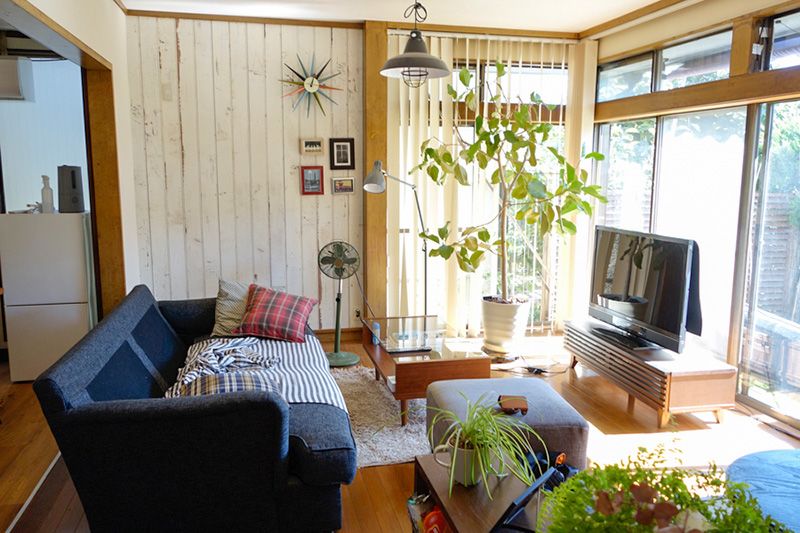 The Sharenest living room shows that modern sharehouses are far from the dimly lit dormitories many still associate with them.

“Being around other older people can be unhealthy if they only talk about illness and death, or about how many years they have until they die. If there’s a youngster around who’s like a grandchild, it’s very different,” says Hosoyama Masanori, the chief executive of Stone’s, a real estate agent in Kawasaki that runs 11 sharehouses, including a multigenerational one and four for single mothers.

Single mothers are one of the most vulnerable groups in Japan, with some 55% living below the poverty line. Many go from being a housewife to juggling a full-time job, solo parenting, and the emotional impact of a separation or a divorce. The Stone’s sharehouses lessen the burden by allowing them to get support from other mothers in the same situation and providing a babysitter once a week, while the children gain new playmates.

“Sometimes the kids get confused because some mothers get angry at them for something that their own mother wouldn’t. But in the end they get used to it and learn that people have different values, which is really important,” says Hosoyama. “Originally children were raised by the community and anyone could scold someone else’s children. That doesn’t happen much any more, but I think there are some people who want to get back to that.”

A Return to Community?

Sharehouses are reviving the traditional sense of community that existed in Japan before the advent of American-style houses for nuclear families. The sociologist Maren Godzik describes prewar homes as “permeable,” with people commonly visiting neighbors’ homes to use the radio, television, or even bathtub. 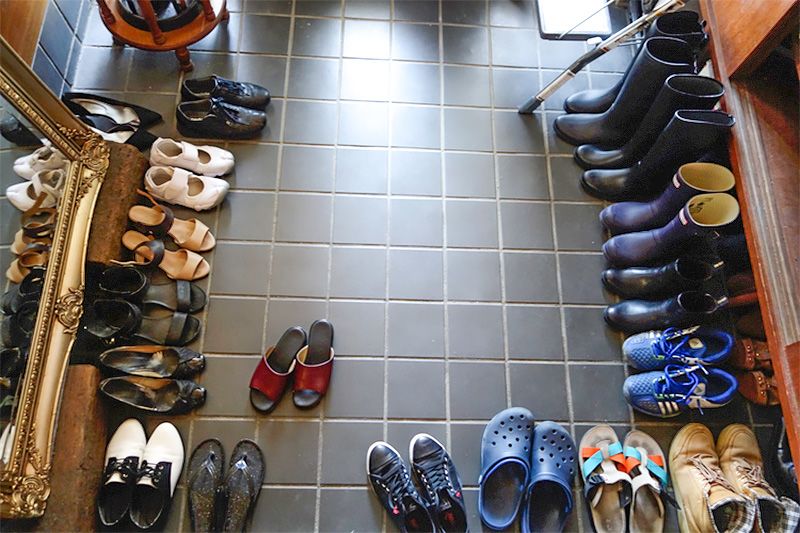 Communal living can make for a crowded genkan.

In contrast, apartment buildings built since the 1950s have been characterized by compartmentalized seclusion. And as in other industrialized countries, longer working hours and increasingly individualism over the past few decades have caused a tendency to see interdependency on others and the maintenance of community relations as stressful, time-consuming, and ultimately unnecessary. The social imperative in Japan to ki o tsukau—to always consider others’ feelings before one’s own and to act accordingly—can add further stress to interactions, motivating people to live alone rather than have to constantly think about the needs of their roommates.

Some, however, find the stress of isolation worse than that of having to get along with others. Additionally, many young people are less interested in—and less able to afford—their own home, and would prefer to share with others. Sociologists have coined the term satori sedai, or “enlightened generation,” for those too young to experience the boom years of the bubble economy, due to their monkish lack of desire for worldly goods.

Taking this sharing to an extreme is Shibuhouse, a collective that currently resides in a four-story house in central Shibuya, Tokyo. Now with around 25 members, their numbers once swelled to 50, stressing out their ad-hoc sleeping arrangement: it’s up to residents to find an empty space in a room with wall-to-wall futons on the floor. Saitō Keita, one of the founders of the collective, realized things were getting too crowded and halved the number of members when some people began sleeping on the stairs. But the former family home is still way over capacity.

Although there’s no private space, the benefits of living so ascetically is the freedom to make art and throw parties—the group regularly puts on exhibitions and there’s a DJ booth and event space in the basement—and to live for just ¥40,000 a month in the heart of the vibrant Shibuya district. Fashion designers, photographers, and illustrators live shoulder-to-shoulder, some of them splitting their time between their parents’ suburban homes, where they go to recharge, and Shibuhouse, where they come to create.

A whole host of sharehouses centered around common interests have rapidly emerged over the past two years. Colish, a website for current and prospective sharehouse operators to advertise for roommates, shows a wide range of homes with unique selling points—everything from cat-filled apartments for feline fans to enormous kitchens for wannabe chefs and garden plots for organic growers.

This is quite different from Europe and North America, where the existing housing stock of former family homes with multiple bedrooms makes sharing a financial necessity. In Japan, a rapid rebuilding cycle allowed for a proliferation of affordable one-person apartments throughout the 1980s and 1990s as an increasing number of young people clamored to move out of their family homes. Sharehouses, which have roughly equivalent rents while offering less privacy, have to promise benefits beyond financial incentives to attract people.

In their earliest incarnation, sharehouses were “guesthouses” designed for foreigners who came to Japan during the economic bubble years and found it hard to rent private apartments because of their prohibitive initial costs and discrimination by landlords. This association with foreigners negatively shaded the word “sharehouse” for many older people in Japan, who fear that having one of these facilities in the neighborhood will lead to raucous parties, incorrect dumping of household waste, or even criminal activity.

But sharehouses have moved well beyond the dingy apartments they originated in. After the bubble burst and demand for low-rent lodgings grew, shared “dormitories” began to emerge, in which individual bedrooms shared a corridor and facilities like a washing machine, toilet, and shower. The next evolution for sharehouses came in the early 2000s, when the boom in “designer mansions,” slickly designed apartments marketed to young professionals, led to the creation of “designer sharehouses” as well.

The emergence of the community-based model came around 2010, as Japan slumped to the end of its second postbubble “lost decade.” The increasing difficulty of finding a suitable marriage partner led many people to reconsider their living environment and the expansion of their social circles. A 2011 movie called Sharehouse helped to popularize the concept and change the image of these homes from “dodgy” places to fun ones in which friendship, and even love, could be found.

Hunger for the Human Touch

Another factor in the spread of sharehouses was young people returning from studies or travels abroad who wanted to re-create the easygoing and friendly atmosphere that they had experienced in shared apartments or hostels in other countries. 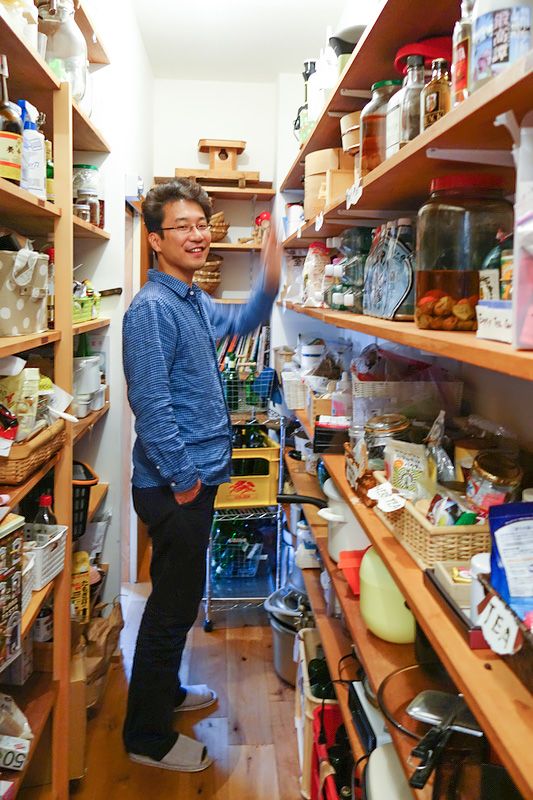 One of those was Toya Hirotaka. Having spent four months in a small village in India, he no longer felt at home in Japan. To try to recapture the feeling of living in a village, he moved into a sharehouse called Well Yōkōdai in Yokohama in 2007. But like most other sharehouses at the time, it operated more like a dormitory, with residents seldom talking to one another. Along with a British man also living there, Toya started “a small revolution” to get people talking and interacting with each other more.

“Sharehouses are harder to do in Japan than in a multicultural country. When you live together, naturally there are things you disagree on, so you need to discuss them. Foreigners can be better at that because their societies are multicultural,” he says. “In Japan, people often focus on harmony and unity, but if you force it, it’s kind of a low-quality unity.” Currently, around five of Well Yōkōdai’s residents are non-Japanese.

Toya met his wife at Well Yōkōdai, where they now live together with their three-year-old daughter and around 30 other people, including four other couples and a baby. Toya has gradually built up the community, starting a permaculture garden and instigating a sharing scheme in the kitchen, where people can leave food, drinks, and even meals they’ve made for others to share. He tries to avoid making rules for the house, preferring to let people govern themselves. Unlike many other collective houses, there is no set mealtime when people are obliged to gather.

“Our philosophy is to let people be free and independent so they don’t need to eat together. There are no obligations. For everything, including the cleaning, it’s up to people to do it as they like,” says Toya. 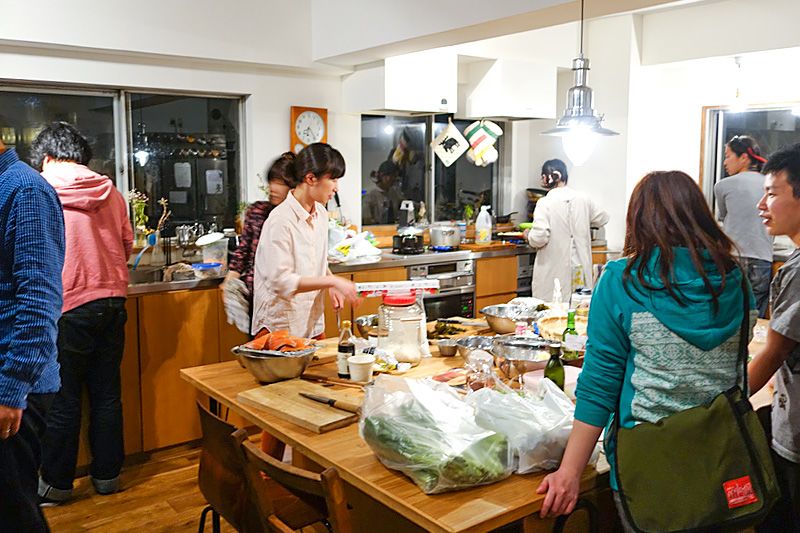 The Well Yōkōdai kitchen is a lively place; the lack of rules doesn't mean a lack of cooperation at mealtimes.

The residents say this conspicuous lack of rules is what makes Well Yōkōdai work so well. Without predetermined rules, they feel naturally motivated to contribute when they have free time, and are relieved to be exempt from chores when they’re busier.

Toya says one of the central principles they share is “the freedom to bother others,” as people are bound to annoy each other when they live together, particularly when children are involved. “Once my daughter drew in red pen on the walls. That’s the sort of thing that may bother others, but it gives everyone the freedom to do their own thing and to accept one another,” he says.

Not everyone in Japan is prepared to live in such a way. It may be difficult for sharehouses to make a serious dent in the growth of single-person households, but for growing numbers of residents, they offer a refreshing alternative to being home alone.

(Originally written in English in February 2016. This article is based on a Rebuild Japan Initiative Foundation study on the living environment in Japan. Banner photo: Well Yōkōdai residents sit down for a meal together. All photos © Sophie Knight.)