Politics Society Aug 5, 2016
When Barack Obama became the first sitting US president to visit Hiroshima, his speech outlined the threat to humanity of nuclear weapons and the need for humankind to turn its ingenuity to the task of achieving a world free of them. Reactions were largely warm, but as Daniel Sneider writes, the voices of those who found his remarks lacking may serve as a signpost toward a future of deeper reconciliation in the Asia-Pacific.

From the moment of their country’s August 1945 surrender that ended World War II, the Japanese people have vigorously, and inconclusively, debated how they should understand the events that led to war and its lessons for Japan. In the early years of American occupation and postwar reconstruction, a progressive narrative placed blame entirely on the wartime regime, dominated by the military and its political allies and nominally headed by Emperor Hirohito.

Later in the postwar era, though, the retreat of the left in Japanese political and intellectual life brought a resurgence of a conservative rendition of the past. In that version of history, the Japanese Empire acted in self-defense, countering the encirclement of Western imperialism and liberating Asia from colonial rule.

The dominant wartime memory in Japan, however, remains the pacifist narrative. In this understanding of the past, war itself is the enemy. For Japanese, the central lesson of the war is that experience of destruction and the horrors of warfare must never be repeated. For Japan, and, by extension, for all nations, there is no such thing as a “just war.” It is a narrative of victimization, one that largely avoids the question of who was responsible for the war.

Echoes of the Pacifist Narrative

US President Barack Obama stepped into the middle of this debate when he visited Hiroshima, the site of the first atomic bombing, carried out on August 6, 1945. No place expresses this pacifist narrative more visibly, and more powerfully, than the Hiroshima memorial and its museum. In deciding to visit the site, a controversial step considered but rejected by previous American presidents, and, more importantly, in the content of his stirring address, President Obama embraced in no uncertain terms the pacifist vision that has animated Japan since the end of the war.

The President clearly understood he had to navigate a political and philosophical minefield. He could not second guess the decision taken by his predecessor, President Harry Truman, to use atomic weapons, one taken in the heat of a global war then heading into its fifth year for the United States. Apology, or even the hint of it, was out of the question. The President also could not appear to ignore the suffering of others in the war, particularly those who were Japan’s wartime foes. 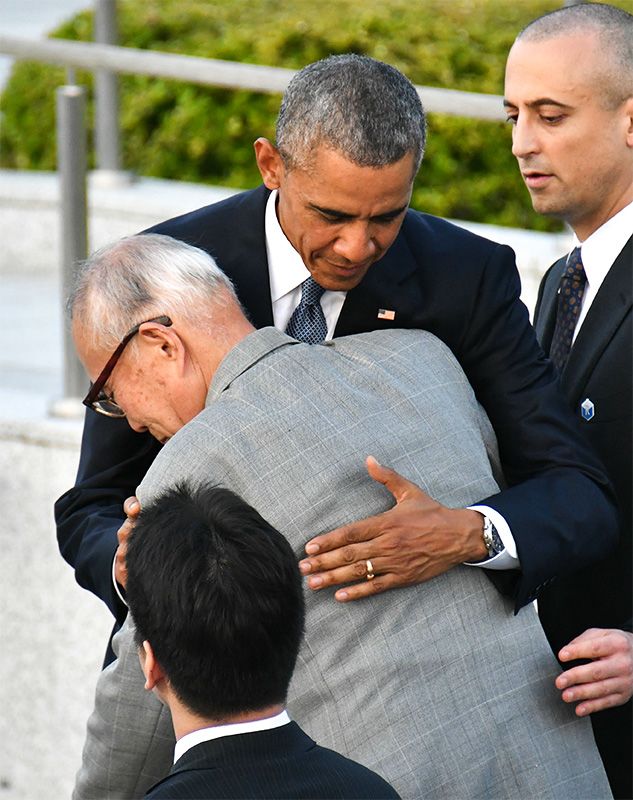 President Obama embraces historian Mori Shigeaki, who found the families of American A-bomb victims and got their names inscribed on the list of hibakusha. © Jiji

Obama’s artfully crafted address precisely avoided any statement of apology. In mourning the dead, he took care to pay respect to not only the Japanese men, women and children who perished but also the “thousands of Koreans” and a dozen American prisoners who died in the attack. He made brief but eloquent reference to many victims of the war, those who were “shot, beaten, marched, bombed, jailed, starved, gassed to death,” some of them at the hands of the Japanese military.

The President and his advisors were also mindful of avoiding too open an endorsement of the Hiroshima memorial’s tale of victimization. The Peace Memorial Museum’s exhibit is almost notorious among Americans for its inadequate acknowledgement of the sequence of events, beginning with Japan’s invasion of China and its attack on Pearl Harbor, that ultimately led to the final days of the war. The exhibit was slightly modified some years ago to respond to that lack of historical context, but even now it remains a powerful story of victimization. That is why the president paid only a brief visit to the museum itself, though he compensated with his emotional embrace of a hibakusha at the ceremony.

While navigating those perilous shoals, Obama echoed the core of the Japanese pacifist belief system. He argued in his address that war itself, propelled in broad terms by man’s inhumanity to man and by forces present in all nations, is the enemy.

“On every continent, the history of civilization is filled with war, whether driven by scarcity of grain or hunger for gold; compelled by nationalist fervor or religious zeal,” Obama said. “Empires have risen and fallen. Peoples have been subjugated and liberated. And at each juncture, innocents have suffered, a countless toll, their names forgotten by time.”

With great eloquence, Obama placed the events that led to the atomic bombings of Hiroshima and Nagasaki within that broad framework. He went on to focus his remarks on the particular horror of nuclear weapons, an expression of the terrible irony that scientific creativity can yield great destruction. “Technological progress without an equivalent progress in human institutions can doom us,” Obama preached. “The scientific revolution that led to the splitting of an atom requires a moral revolution, as well.”

Pushes for a Fuller Reckoning

This moralistic approach, with its pacifist imagery, is hardly without its critics, not least within the United States. For those critics, the address avoids the question of responsibility. If war is simply the product of man’s underlying capacity for inhumanity, then what is the legal and moral responsibility of those who set war into motion, an idea that forms the premise for the war crimes tribunals conducted after the war? Those trials have been denounced by some as “victors’ justice,” particularly by conservatives in Japan, but most Americans stand by the war crimes judgments.

“What Hiroshima represents is more than the effects of a nuclear weapon,” former American prisoner of war Lester Tenney wrote in an article in the Wall Street Journal, published on May 11. “It is the culmination of a war started by Imperial Japan and conducted with gross inhumanity, a war in which more civilians died than combatants.”

Tenney, now in his nineties, is a leader among former POWs seeking recognition and compensation for his use as a slave laborer in the coal mines of Kyushu. He was within miles of the Nagasaki bombing and wrote powerfully of his conviction that the bomb saved his life.

“Mr. Obama wants to use his visit to Hiroshima to highlight the perils of nuclear war,” Tenney wrote. “But this is not the only lesson. Our service as veterans of the Pacific War needs to be remembered and not abandoned to some tumid oratory. The president’s visit will be hollow, a gesture without motion, if the Pacific War’s full history is not maintained. Hiroshima does not and cannot exist outside the context of the Asia-Pacific War and all its dead.”

Conservatives in the United States were, not surprisingly, the harshest critics of the President’s visit and speech. One prominent writer for the conservative National Review accused him of “moral equivalence and maudlin sentimentality.” The absolution of Japanese responsibility, David French wrote, was unacceptable.

“No, Mr. President, in the image of the mushroom cloud, we are starkly reminded of the horrific evil of Imperial Japan and the ingenuity and resolve of the American people to defeat one of the most genocidal forces the world has ever seen,” French wrote.

French was among many who felt the President effectively apologized for Truman’s decision to use atomic weapons. In this view, Obama failed to clearly support the central justification that the bombs brought the war to a quick end, avoiding the much greater loss of life, both American and Japanese, that would have accompanied an invasion of the home islands. This assessment is widely shared by both the American public and by American historians, and by the president himself. But Obama apparently bowed to Japanese sensitivity in not repeating that claim in his Hiroshima address.

On the American left, there were also opponents of the President’s visit. For them, it is not the embrace of pacifist ideas that is problematic. Rather it is the hypocrisy of that stance. Arms control advocates pointed to the Obama administration’s funding of an expansion of the US nuclear weapons program, despite the antinuclear rhetoric.

For others, the visit’s real effect was to shore up the conservative government of Prime Minister Abe Shinzō and enable it to pursue, with American encouragement, the repudiation of Japan’s postwar pacifism.

“By delivering an appeal for disarmament in a nation whose pacifist Constitution his Asian pivot has helped to controvert, Mr. Obama has risked lending credibility to the dangerous notion beneath Abe’s rhetoric,” the American author Dreux Richard wrote in the New York Times, “that Japan can best retain its identity as a peace-loving culture by embracing the restoration of its martial role in international affairs.”

Lessons for Other Leaders

The best judgment of the impact of Obama’s Hiroshima visit may be what follows in Northeast Asia, where the task of postwar reconciliation remains unfinished. If the visit merely serves to certify Japan’s victim status, it would send a troubling message to those who were on the pointed end of Japanese aggression in Asia. The negative reactions in China and Korea to the visit had a ritualistic quality and, by the standards of previous rhetoric surrounding wartime history, were relatively mild. In Korea there was a conscious effort not to overreact to the visit, not least out of deference to its American allies.

Nonetheless, the Obama visit to Hiroshima also put a challenge on the table to Japan and to Prime Minister Abe in particular—one that the media picked up easily. If the American president can make the pilgrimage to Hiroshima, and acknowledge the suffering that took place at American hands, then why can’t the Japanese leader undertake a similar gesture of reconciliation at the memorial to those killed by Japanese invaders in Nanjing, or in Seoul with a gathering of former so-called comfort women?

The president demonstrated political courage in breaking the historical taboo against such a visit. And it is notable that the voices of censure were far fewer in number and milder in intensity than many feared. Some had counseled Obama not to go for fear of the political backlash it would generate, especially in an overheated election year. Instead, the president correctly understood that the United States, as a nation, was ready to face its wartime past. That is a lesson that others can, and should, learn as well.

(Originally written in English. Banner photo: US President Barack Obama speaks in Hiroshima on May 27, 2016. © Jiji)