How the JET Program Changed Japan

Society Global Exchange Nov 10, 2016
The JET Program was launched in 1987 and is now celebrating its thirtieth year. Over the decades, more than 60,000 participants have contributed to Japanese communities through such activities as teaching English and working for local governments. They have also encouraged many Japanese people to think more about other cultures and their own place in the world.

The Japan Exchange and Teaching Program has played a major role in the internationalization of Japan. It was launched in 1987 as a means of boosting English and other foreign language education and promoting international exchange at the local level.

The program invites college graduates from around the world to work in Japan. Now in its thirtieth year of operation, there are currently 4,952 participants from 40 countries. This is a significant increase on the 848 participants from just four countries in 1987. More than 62,000 people have taken part in the program over its history, making it one of the largest of its kind in the world. Current JET participants are employed in around 1,000 local public bodies in 45 prefectures. 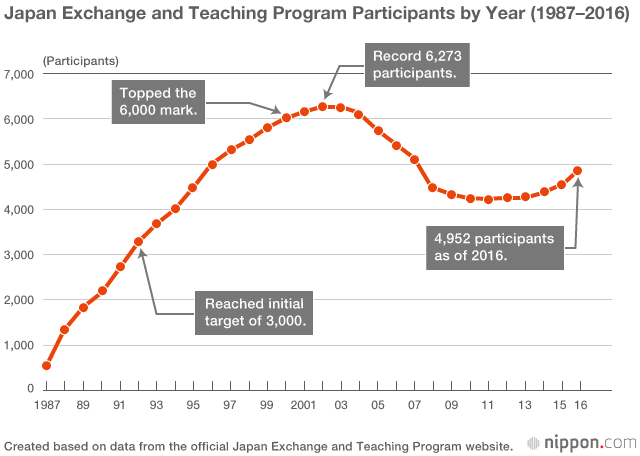 Opening the Door to Cultural Exchange

At the start of the program, the introduction of so many foreign English teaching assistants in Japanese schools was revolutionary. Japanese students received direct instruction from these young graduates, encountering the English language as it was actually spoken. In addition to their linguistic education, students gained an opportunity to experience other cultures and think about their own place in the world.

At the same time, participants had the chance to connect with typical Japanese communities in postings all over Japan—often in outlying areas of the country. This experience, usually at an impressionable age, shaped their thinking and future lives.

The impact of the program on those who took part can be seen in the robust state of the JET Alumni Association. It currently has over 26,000 members in 52 branches located in 15 countries and regions. In the United States, branches have been established in New York, Washington DC, and 17 other cities across the nation.

Since 1992, there have also been participants from China, with around 70 working in Japan each year. They are mostly sent by local governments in China and take on responsibilities for Japan-related activities after they return home. Such exchange at the grassroots level is quite important at a time when Japan-China relations remain tense.

When the program started in 1987, there were only 800,000 foreign residents in Japan, representing just 0.6% of the total population. Simply seeing someone who was not Japanese was quite rare in many regional communities, so the arrival of JET participants caused a culture shock across the country.

They were assigned to all kinds of places, including not just small, regional cities but also remote islands, where they settled into local life, interacted with residents, and helped teach English to children. This made a great contribution to changing attitudes toward other countries and their citizens across Japan.

In Japan, there is an allegory for international exchange that talks about “earth people” and “wind people.” Earth people remain settled in one area. If a community consists only of earth people, it is stable and without conflict, but it will eventually become lifeless and stagnant. Wind people, on the other hand, are outsiders who move into an area. When earth people and wind people meet, there is often conflict and confrontation. But such encounters also create new knowledge, ideas, and energy. Ultimately the two coalesce into a rich and vital culture. In Japanese, the word “culture” is written as 風土 (fūdo), consisting of the characters representing wind (風) and earth (土). International exchange is based on bringing people from other countries to stimulate this creation of new local cultures.

JET participants are wind people. When they settle in an area with limited international connections, their different ways of thinking can create a fresh and invigorating breeze.

It is not always a harmonious or enjoyable experience. JET participants have faced numerous obstacles due to cultural and organizational differences and communication barriers. In overcoming these difficulties, however, they have come to understand their own identities and learned about Japanese society and culture. Japanese people are not all kind, they realize, and schools and other organizations may be inflexible. At the same time, JET participants meet many warm and welcoming locals. Overall, their experiences allow for personal growth.

A Musical in Shikoku

In Kōchi Prefecture on the island of Shikoku, JET participants regularly produce a musical in the region’s Tosa dialect. The story incorporates local history and culture and is performed in front of Japanese audiences. Residents in the community support the musical, which has taken place every year since 1996. 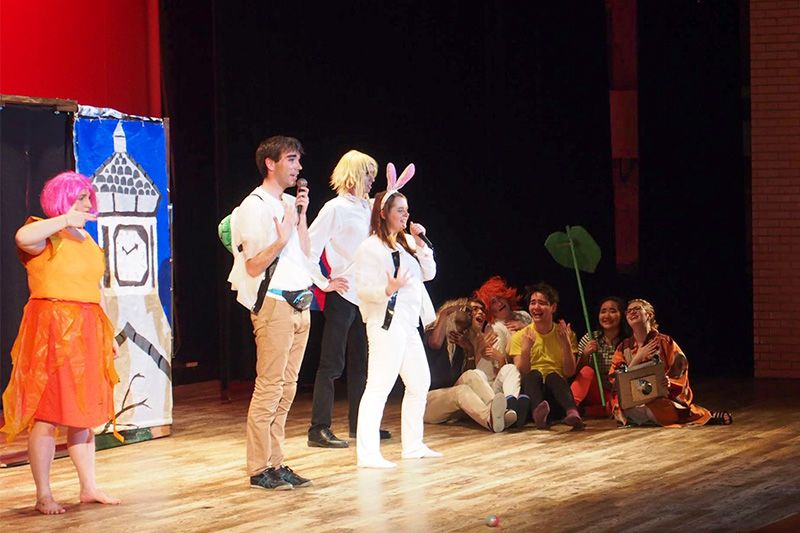 The JET participants talk in Tosa dialect during a humorous song-and-dance performance, and local people watching get a new perspective on their speech and culture. Each year, members of the JET team write their own script, appear on stage, and make their own props.

In 2005, the musical was honored with a Japan Foundation Prize for Global Citizenship. It is a fine example of a joint artistic undertaking involving JET participants and the local community. Although participants usually stay in their respective communities for just one year, this activity has continued without interruption and has become a fixture on the Kōchi cultural calendar.

Sister Cities and Staying On

There is also fundraising at the show. The money is used to support study abroad programs for local junior high and high school students. In other words, the young people who are benefitting from the JET experience are helping give young people in Kōchi opportunities to live and study in a foreign country, contributing to nurturing the next generation of internationally minded Japanese people.

Many JET participants have also planted seeds of international exchange, helping to establish sister-city relationships between their hometowns and Japanese host communities. For example, a JET fellow was the key liaison in establishing a sisterhood tie between the town of Miharu in Fukushima Prefecture and Rice Lake in Wisconsin.

There are no limits on how long a sister-city arrangement may last, and exchange can take many forms, including visits and homestays by young people or economic arrangements. When JET participants are involved in setting up these ties, they are making a contribution to the future of both cities, helping residents learn about the culture of another country, make lasting friendships, and engage in valuable exchange.

Some participants stay on in Japan after their time on the JET Program is over. They may have planned to return home right away but change their minds along the way and look for new jobs in Japan, even becoming naturalized citizens. Surely, this will contribute to the revitalization of outlying communities, where population decline is a serious problem.

The JET Program has been highly successful in promoting international exchange, far surpassing the expectations of 30 years ago. It is one of Japan’s most prominent forms of soft power, and one hopes that it will develop ever further in the years ahead.

(Originally published in Japanese on November 2, 2016. Banner photo: A JET assistant language teacher works with a Japanese teacher at an English class in an elementary school in Kōchi Prefecture.)