Foreign Care Workers in Japan: A Policy Without a Vision

Society Feb 13, 2017
Japan will lower specific immigration barriers this year to ease a projected shortage of professional care workers for the elderly. A health sociologist draws on extensive research to critique the government’s shortsighted, private-sector-driven approach to the problem, calling for greater efforts to support and export Japan’s advanced system of care work.

Opening the Door for Needed Help

Elder-care workers are in high demand in Japan, which has the highest percentage of elderly citizens of any country in the world. According to the Ministry of Health, Labor, and Welfare, Japan currently has about 1.8 million care workers qualified to provide care for the elderly. The ministry estimates that, barring some major change, the nation will need an additional 380,000 care workers by the year 2025, when the products of the postwar baby boom will be 75 or older.

With such warnings in mind, Japanese lawmakers took steps last fall aimed at facilitating the migration of foreign care workers to Japan. Specifically, they passed legislation that extends Japan’s Technical Intern Training Program to care work and revised Japanese immigration law by establishing the “care work,” or kaigo, visa as a new category of legal residence.

Japan’s Technical Intern Training Program, established for the ostensible purpose of transferring technical skills to developing countries, permits foreign nationals who would otherwise be ineligible for long-term residence or employment in Japan to work here as “trainees” under the supervision of agricultural and/or fishery cooperatives, factories, and small businesses.  The recent change expands the program’s scope from such industries as agriculture, fishery, construction, and food processing to care with the primary aim of bringing the trainees into the Japanese labor force. The change of the immigration law, aimed at addressing the projected labor shortage, will allow foreign students who train at a Japanese care facility for two years and pass a national board examination to live and work in Japan indefinitely under the newly established kaigo residence status.

Japan has been accepting a limited number of nursing and care-work trainees from Southeast Asia since 2008 under economic partnership agreements with Indonesia, the Philippines, and Vietnam. As a researcher who has studied this program and its participants from the beginning, I am deeply disappointed with the Japanese government’s failure to deal with labor issues in Japan’s care industry from a long-term perspective. The latest plan, like the EPA program, is a myopic measure focusing narrowly on the goal of securing foreign workers to work in this sector. This explains the government’s failure to establish an independent body to oversee the private-sector-driven training program or to develop procedures to prevent the exploitation of care-work trainees by unscrupulous staffing agencies, a problem that has arisen often in the past.

The nursing and care professions involve a very high level of “emotional labor,” meaning the ability to manage one’s feelings and regulate one’s expression of emotion to ensure appropriate personal interaction. This is why one cannot address a labor shortage in the industry by mechanically increasing the number of foreign workers, the way manufacturers might expand their workforce to meet production targets.

We should note also that, as things stand, there is little cause for optimism concerning Japan’s capacity to attract and retain labor from other parts of Asia. Today, with Japan’s economic star in the descendant, particularly as compared with China and other rapidly industrializing countries in the region, we should be developing a long-term vision for substantive immigration reform aimed at ensuring Japan’s survival in the global community.

As previously mentioned, Japan already has a system for training and recruiting foreign nurses and care workers under bilateral EPAs with three countries in the region, Indonesia, the Philippines, and Vietnam. This program, launched in 2008 with great fanfare, offers important lessons for us going forward.

Under the EPA programs, qualified applicants receive Japanese language training, followed by professional training at a Japanese medical or care facility. If they pass the national board examination, they are then eligible to work in Japan indefinitely, renewing their residence status every three years. Candidates invest a great deal of time and effort to complete their training and earn their license, as do the facilities that take charge of their training. We must ask why, then, 16%–38% of those who passed the national board examination have returned home instead of staying on in Japan.

Many of the nurses and care workers who left Japan cite working conditions and long hours that made it impossible to balance work and family or proved injurious to their health. These are the same reasons Japanese nurses and care workers give for leaving the profession. In other words, Southeast Asian trainees are deterred by the same extreme conditions that drive Japanese women and men out of the profession. This tells us that the most important prerequisite for securing adequate care-work personnel in Japan, regardless of nationality, is to improve working conditions.

I should hasten to note that many of the EPA nurses and licensed care worker returnees  I interviewed in Indonesia stressed the benefits of the program from their viewpoint. They were not referring simply to the money they earned and saved as paid trainees but also to the opportunity for direct contact with geriatric nursing and elder-care services in Japan. At present, none of the Southeast Asian countries with which Japan has EPA training agreements has a separate certification program for elder-care professionals, such as Japan’s national program for licensed care workers. Owing to differences in culture, demographics, life expectancy, and the sort of health issues people face, care for the elderly in those nations is primarily the family’s responsibility.

The EPA returnees with whom I spoke told me that nothing they had learned in nursing school at home had prepared them for their experience in Japan, where they were coached to treat patients as they would their own parents. “Japan’s long-term care insurance is a wonderful system,” an Indonesian nurse said. “Indonesia is going to face the same challenges of an aging society before long, and I’d like to be involved in designing a long-term care insurance system here.” An Indonesian care worker who had obtained the national license spoke glowingly of Japan’s home care as a promising model for Indonesia, where such services are close to nonexistent at present.

Comments like these were particularly frequent among trainees who had completed nursing school in Indonesia before coming to Japan. They raised the possibility that the experience of those trainees will help spearhead the incorporation of Japanese approaches to elder care in Indonesia into the new field of geriatric nursing. A nurse who obtained her national license in Japan told me that she wanted to set up a school devoted to preparing Indonesian candidates to undergo care training in Japan. Having had the opportunity to work on the front lines of Japan’s hyper-aging society, these returnees have seen what lies in store for Indonesia. Armed with knowledge of Japanese language, culture, and work habits, they are in an excellent position to pass on their know-how to the next generation of trainees.

The establishment of care workers as a new category of legal residence status under Japanese immigration law will doubtless open the door to a significant influx of migrants from around the region. But how many of these migrants will come equipped with the basic skills, appropriate educational background, and temperament needed to provide services at the level we expect of our care workers in Japan? We can hardly expect them to attain those standards in the course of a two-year program unless they are screened in advance for Japanese language proficiency, basic knowledge of medicine, and aptitude for emotional labor.

For example, a level of Japanese proficiency equivalent to at least N3 (under the five-tiered Japanese-Language Proficiency Test) is considered essential to pass the national board examination for care workers. Now being discussed is a requirement for Japanese language ability at a level corresponding to N4 (the ability to understand basic Japanese) for admission into the Technical Intern Training Program. However, no language requirement has been established for international students entering the country with the intent of applying for the kaigo resident status under the legislation passed last fall. This raises the possibility that large numbers of candidates will enter the country with no hope of attaining the minimum level of Japanese language proficiency needed for success in the national board examination.

EPA returnees could help address this screening problem and, in the process, play a key role in the transfer of Japanese care know-how and technology. First, they would need to secure positions as high-level instructors in their home countries’ nursing schools. After that, they could help develop and teach a curriculum geared to Japan’s national board examination, including courses in Japanese language and culture, as well as the basics of geriatric nursing and care. Graduates of such a curriculum would enter Japan’s Technical Intern Training Program in care and/or apply for a visa as international students, who aim to obtain the kaigo resident status in the future, after equipping themselves with the basic level of language skills and medical knowledge needed to succeed.

Of course, not all graduates of those courses would be obliged to migrate to Japan. Some might choose to stay behind and help their own countries prepare for the aged society to come, such as by providing guidance to family caregivers and improving the overall quality of elder care in the communities where they live.

Here in Japan, meanwhile, we should work to build the kaigo “brand” as a synonym for high-quality, standardized care supported by the Japanese system of long-term care insurance. This is the biggest key to attracting talented people to the profession on a continuing basis. We should also develop methods to assist EPA and Technical Intern Training Program returnees in adapting Japan’s systems and practices to their own countries’ conditions, including their epidemiological profiles, healthcare systems, and labor situations. Such a model would be worth exporting to countries around Southeast Asia, especially nations like Singapore and Thailand, where society is aging at a rapid pace. In addition to hastening the dissemination of advanced Japanese know-how and technology in the field, such an initiative would help create new jobs throughout the region.

Care work is one of a number of areas in which Japan has developed outstanding technology and know-how. With this in mind, we need to balance efforts to bring foreign care workers to Japan with policies aimed at nurturing and disseminating our know-how. This means devoting adequate time and care to training foreign workers, while also maintaining the kind of domestic labor environment needed to preserve the image and reality of Japanese care work as decent work. We should also continue to provide technical assistance and services to trainees after they have returned home. The transfer of technical know-how to support an aged society is one important way in which Japan can contribute to the international community in the years ahead. 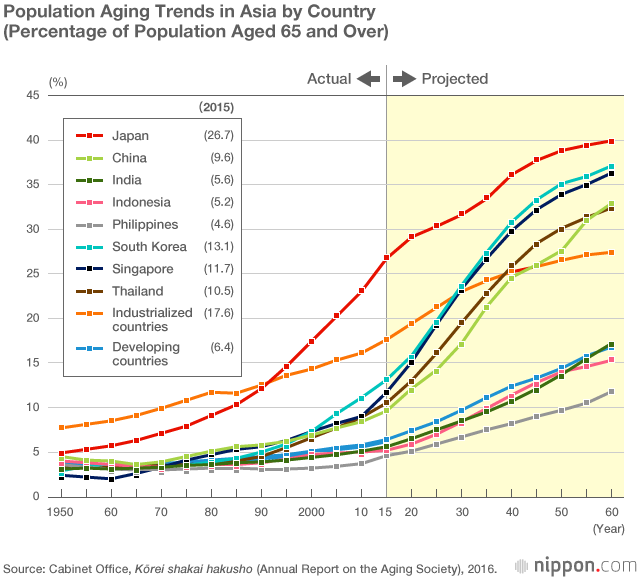