Society May 1, 2017
The Diet passed the Dormant Deposit Utilization Act in December 2016, opening the way for funds in bank accounts that have been inactive for 10 or more years to be utilized to finance social welfare activities. Tens of billions of yen are consequently expected to be put to effective use each year in the public interest.

In December 2016, Japan’s National Diet passed the Dormant Deposit Utilization Act. While the act will promote the use of dormant bank accounts, this does not mean that the funds of depositors will be confiscated, as is widely misunderstood. Rather, its intent is to make socially beneficial use of dormant deposits. The act guarantees that those who do come forward to request repayment will have their deposits returned. Japan is currently burdened with social issues arising from an aging, dwindling population and public debts of more than ¥1,000 trillion. The act thus aims to use dormant deposits to promote initiatives that will transform Japan into a leader in solving those issues.

The act opens a path for dormant deposits that are not refunded to be used for activities in the public interest. Such activities are those undertaken by private organizations with the aim of solving social issues that are difficult for central or local governments to address in view of the rapid economic and social changes ensuing from a population decline and aging. Specifically, the act envisions the following three activities.

Other activities may subsequently be added by a Cabinet Office order. While the three above areas may appear limited, “support for the revitalization of local communities” actually encompasses a wide range of activities.

The main aims of the Dormant Deposit Utilization Act include the following:

These aims are designed to prevent funds from simply being used as subsidies. The focus on multiple years, development of innovative methods, and establishment of targets suggest a desire to effectively support entities that are truly laboring to solve social issues with new and innovative approaches. These entities are also expected to leverage the funds they receive to generate additional income from private sources, rather than becoming dependent on them.

The figure illustrates the framework for utilizing dormant deposits. 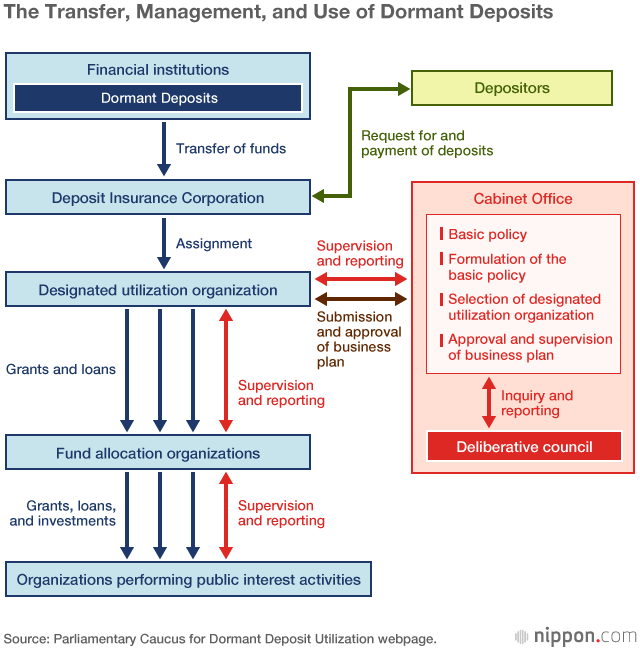 This framework has two important features.

First, the designated utilization organization does not directly fund projects. Rather, the framework seeks to make effective use of the funding functions of existing groups in the local community. There are three advantages to this approach.

The Dormant Deposit Utilization Act will take effect 18 months after its enactment, and it is assumed that the funding of actual projects will begin in the second half of 2019. Thus, there will be a need to formulate suitable detailed plans in the next two years.

Such plans will be examined by a deliberative council that will be established in the Cabinet Office. Already, a platform to consider the future framework for utilizing dormant deposits was established in February 2017 led by the private sector with the participation of a wide range of stakeholders. Discussions will take place in an open manner regarding approaches to ensuring transparency, suitable management methods, and the assessment of project results.

Three points will need to be considered in considering the future framework for utilizing dormant deposits.

Learning from Other Countries

On a trip to South Korea to learn how dormant deposits are being utilized there, I was told by the heads of Korean foundations that solutions to social issues evolve and change with the times, that legally codified solutions soon grow outdated, and that a certain amount of flexibility is needed.

In that sense, Japan’s Dormant Deposit Utilization Act can be seen as a distinctive piece of legislation evolving out of the successes and failures of such forerunners as Britain and South Korea.

First, rather than prescribing everything in detail by law, which is difficult to revise once the law takes effect, utilization will take place by establishing a council and by having the prime minister specify a basic plan each year after reviewing council proposals and the current situation.

Second, utilization can take the form of either grants, loans, or investments.

Third, the designated utilization organization will not be a newly established independent administrative agency led by government and based on legislation as in the past. A foundation established by private-sector initiative will be designated.

The move to utilize dormant deposits has just begun. By pooling the knowledge and experience in the country and by leveraging dormant deposits to achieve a distinctively Japanese approach to social innovation, a social model may be created that will serve as a point of reference for other countries in Asia and elsewhere as they come to experience the demographic challenges now confronting Japan.

(Originally published in Japanese on March 27, 2017. Banner photo: A new law opens the door to the utilization of dormant bank deposits for activities in the public interest. © Aflo.)