Society Jun 5, 2017
The railway system of Hokkaidō is now in a critical state. The island prefecture’s population is shrinking, while car ownership has risen, causing train ridership to decline. Half of the existing rail network may be unsustainable. How should this problem be addressed?

In November 2016 Hokkaidō Railway Company identified major sections of its existing network that will be hard for it to sustain on its own. JR Hokkaidō, as it is commonly known, was created when the Japan National Railways system was privatized in 1987, becoming the Japan Railways Group. At that time the JNR’s passenger services were split among six new JR companies, three on Honshū, Japan’s biggest island, and one each on Hokkaidō, Kyūshū, and Shikoku, the other three major islands. Since then the three companies on heavily populated Honshū—JR East, JR Central, and JR West—have done well, and JR Kyūshū, which has been making profits by expanding its non-railway operations, successfully executed an initial public offering of its shares in 2016. But the companies on Hokkaidō and Shikoku have faced hard going. JR Hokkaidō in particular has suffered a loss of confidence due to a string of accidents starting with the May 2011 train derailment and fire on its Sekishō Line. And its financial state has become clearly critical.

In June 2015 an independent panel issued a set of recommendations, calling for the company to rehabilitate itself by placing top priority on safety and to undertake a process of uncompromising selection and concentration. 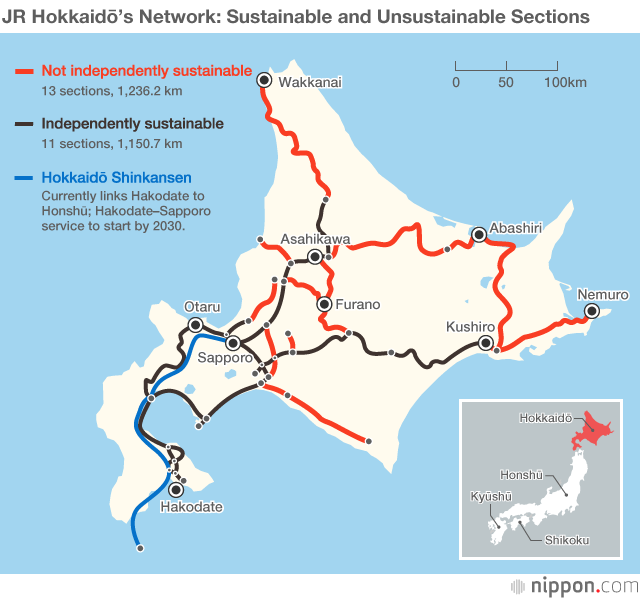 Train ridership has been declining particularly in the eastern part of Hokkaidō due to a combination of population shrinkage and increased reliance on cars. On top of that, low interest rates have caused a sharp drop in JR Hokkaidō’s income from the management stabilization fund set up by the government to offset expected losses in railway operations when the company was established. The problems of the island prefecture’s railway system are now beyond the capability of JR Hokkaidō to solve on its own.

Among the six companies, JR Hokkaidō posted by far the largest operating loss on its railway operations, and it recorded a pretax loss even after receiving special support from the government.

In the future, JR Hokkaidō will have to repay large amounts of interest-free loans.

Looking for a Sustainable Future Course

In response to this situation, a Railway Network Working Team was established to consider the future of Hokkaidō ’s rail network from a prefecture-wide perspective. The team, which I chaired, consisted of eight members, including academics, a senior officer of JR Hokkaidō, and municipal mayors. We held four meetings from November 2016 through January 2017, and in February we submitted our report to Hokkaidō Governor Takahashi Harumi.

We classified the lines of Hokkaidō’s existing rail network into six types and suggested a future course for each type.

These lines should be sustained, with as much cooperation and support as possible from local communities, to serve as high-capacity, high-speed public transportation links.

These lines are hoped to play a major role in Hokkaidō’s promotion of its tourist industry. Some of them, however, are finding it hard to pay their way, and it will be difficult to sustain lines that rely solely on tourists as passengers. Ways to operate these lines on a sustainable basis should be considered at the local level.

In view of the possibility of increased exchange with the Russian Far East, it will be necessary to maintain the rail link to the Sōya area, which is contiguous to Japan’s border with Russia. And it will be necessary to give ample consideration to the role of the rail link to the area neighboring the Northern Territories, where there are hopes for the development of joint economic activities and other forms of exchange.

Hokkaidō is a major source of food for the rest of Japan, and rail freight transport has an important role to play in this connection. But it will be necessary to consider this matter on a comprehensive basis, looking also at trucking and ship transport with a view to promoting efficiency and optimizing performance.

Sharp declines in ridership have made some sections of the rail network highly unprofitable. It will be necessary to consider the future of such lines at the local level, with participation from JR Hokkaidō and the national and prefectural governments, looking at possible arrangements with local transportation providers, such as partnership, complementation, and substitution. JR Hokkaidō will need to take fully into account the various roles that railways have served, paying ample attention to local conditions and residents’ opinions.

(6) Lines in the greater Sapporo area

It will be necessary to increase operating revenues through stepped-up efforts to improve convenience so that these lines can contribute financially to preserving the prefecture-wide rail network.

In our summing up of the situation, we did not refer to the future fate of individual lines, taking this to be a matter for deliberation in each of the affected areas. But we were in consensus that it will be difficult to sustain all the sections of the existing network, and on this basis we classified lines according to their characteristics, distinguishing between those that should be sustained and those that should be considered with a view to options like replacement with alternative means of transportation.

Having done that, we put together recommendations aimed at establishing a sustainable operating structure for JR Hokkaidō, calling for (a) fundamental support from the national government, (b) the response of the prefectural government to JR Hokkaidō’s announcement, and (c) matters to be deliberated at the local level.

JR Hokkaidō’s finances are in a perilous state as the result of great changes in the social environment and of the low rate of return on its management stabilization fund. Though it is organized as a stock company, like a regular business corporation, it has a special semigovernmental status; the national government is strongly involved in its management and needs to play a central role in its rehabilitation.

Our team called for fundamental support in five areas: (a) support for the greater burden that JR Hokkaidō bears in maintaining its tracks because of the high share of freight traffic, (b) reduction of the burden of maintaining the Seikan Tunnel connecting Hokkaidō and Honshū, (c) measures to deal with the renewal of aging railway infrastructure, (d) strategic support for efforts to increase revenues, and (e) financial measures for the period from fiscal 2019, when national government support is slated to end and the company will need to start repaying the interest-free loans that it has received.

Thorough Disclosure and Consultation in Advance by JR Hokkaidō

Our team called on JR Hokkaidō to take full account of local circumstances and to conduct thorough disclosure and scrupulous consultation with those affected in advance of moves like station closures, termination of train services, and fare hikes. We also noted the need for the company to promote ridership with measures tailored to the conditions along each of its train lines, working in unison with the municipalities served by the lines and with other concerned parties.

JR Hokkaidō also needs to improve convenience for riders with moves like the adjustment of timetables to optimize connections with buses and other types of public transit and the improvement of services at stations and on board. But our team judged that it would be difficult as a practical matter to implement the company’s proposal for vertical separation between infrastructure ownership and transport operations, which would place an additional burden on money-strapped municipalities.

In addition, we urged the prompt start of studies at the local level concerning the rail links that will be hard to sustain based only on efforts by transit operators and support from the government. As specific topics for consideration, we referred to initiatives to maintain and improve the attractiveness and convenience of train stations, local cooperation with the provision of on-board sales and shops, and ownership or leasing of running stock by entities like public-private joint ventures.

Looking ahead to the completion of the Shinkansen high-speed rail link to Sapporo in 2030, we identified the roles of the concerned entities over the period to come. We called on the prefectural government to (a) draft a design for the future shape of Hokkaidō’s public transportation network, (b) become actively involved in consultations at the local level, (c) seek fundamental support from the national government, (d) extend cooperation and support to initiatives at the local level aimed at sustaining the necessary railway network, and (e) broadly implement measures to promote ridership.

A Crucial Year for Starting Consultations with Municipalities

There is a deep-seated opinion in Hokkaidō that it will be impossible to solve the problems of the prefecture’s railway system under the current framework, by which the system’s deficits are offset by the income from the management stabilization fund set up when the national railway system was privatized and split up, and that the national government should provide fundamental support for JR Hokkaidō and the preservation of the prefecture’s railways. But the national government continues to take the stance that it has already provided considerable support to JR Hokkaidō and that the next step is for local areas to take the lead. One element underlying this position is the belief that regular bus routes can provide the required minimum of local public transit and so it is not necessary to prioritize railways.

Meanwhile, the government and ruling coalition have set up a team that is deliberating the issue of JR Hokkaidō. In April consultations began between the company and the municipalities served by the Sōya Line, and discussions about the future of rail service are underway in localities along other lines as well. The coming year will be a crucial period for determining the place of railway lines in the intercity transit network and deciding which parts of the existing system are to be kept in service.

(Originally published in Japanese on May 15, 2017. Banner photo: A winter scene at Mashike Station on the Rumoi Main Line, taken in January 2014. In December 2016 service between Mashike and Rumoi was terminated and the station closed. © NOBU/PIXTA)