Society Jul 27, 2017
Japan is entering uncharted demographic territory as its rapidly aging society embarks on a phase of negative population growth. Can the trend be reversed? How can Japan maintain economic growth amid a shrinking labor force and soaring social security costs? Tani Sadafumi reports on Japan’s demographic dilemma.

Japan is moving into unknown demographic terrain as its population, already the world’s oldest, simultaneously ages and shrinks. In the coming decades the nation will have to cope with such issues as a contracting labor force and soaring social security costs, and as senior citizens make up an ever-growing voting bloc the government must determine how to balance the demands of the old against the interests of the young. In the following, I have drawn on a June 14 presentation by Kaneko Ryūichi, deputy director-general the National Institute of Population and Social Security Research (IPSS), to provide a concise overview of Japan’s demographic dilemma and discuss some possible solutions.

The charts in figure 1 illustrate the massive shift in Japan’s demographic structure over the past 50 years. The population pyramid for 1965, at the height of the postwar economic “miracle” (and a year after the last Tokyo Olympic Games), shows a more or less typical age distribution for a growing population, flaring near the bottom and tapering toward the top. Individuals in their teens create the largest bulge (the postwar baby boom), dwarfing the over-65 segment. A half-century later, the silhouette has changed dramatically, flaring out well above the middle and narrowing toward the bottom. This signifies two things. First, the young adults of 1965 have survived in large numbers into their sixties and seventies. Second, relatively few children have been born over the past few decades to replenish the younger age groups. 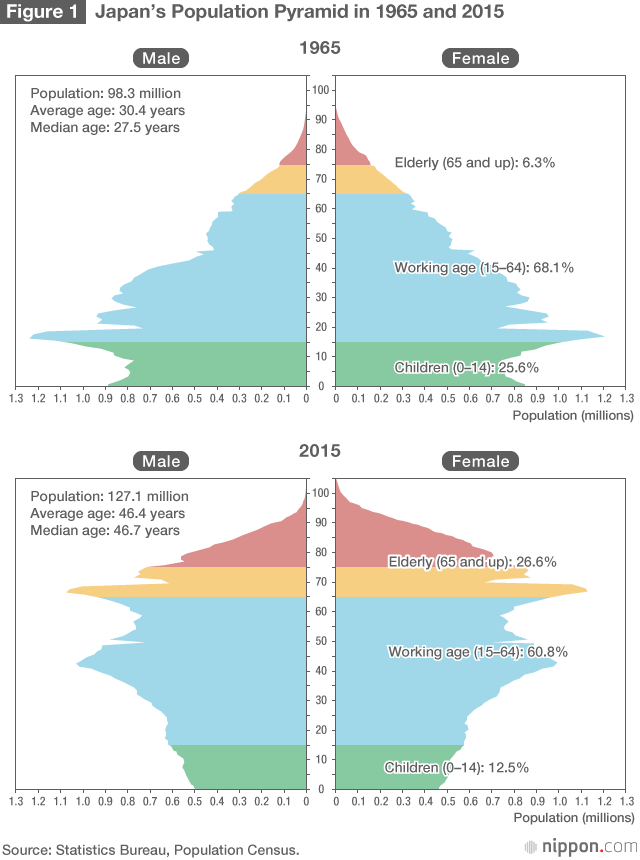 These trends raise serious questions of how the structure of Japan’s population will evolve in the years ahead. The demographic indicators in the table below are the product of the government’s latest population projections using the most likely assumptions about fertility and mortality. The figures in parentheses indicate the change from 2015.

According to these projections, the Japanese population will remain above the 100 million mark through 2040. By 2065, however, it will have fallen well below that symbolic threshold. By 2065, the median age is expected to be almost 56. To put that in perspective, until about 30 years ago, Japanese corporate employees were forced to retire at age 55. Under the old scheme, half of the 2065 population would consist of retired persons.

The working-age population will inevitably dwindle. Between 1965 and 2015, the productive segment of the population (age 15–64) actually grew in number, from 66.9 million to 77.3 million, even though it shrank as a percentage of the total. Henceforth, the working-age population will decline in absolute as well as relative terms, falling to 59.8 million in 2040 and a mere 45.3 million in 2065. This raises the specter of serious labor shortages unless technology or policy can be marshaled to correct the imbalance.

According to the United Nations’ 2017 Revision of World Population Prospects, the total world population will continue to grow over the next century, rising from an estimated 7.6 billion today to 9.8 billion in 2050 and 11.2 billion in 2100. Amid this global trend, Japan, currently the eleventh most populous country in the world, will drop to seventeenth place in 2050 and fall all the way to twenty-ninth in 2100.

To some extent, economic output is linked to population. In 2007, Goldman Sachs shocked the Japanese people by predicting that Japan’s gross domestic product would drop from number three in the world to number eight by 2050, surpassed by the likes of Brazil, India, and Indonesia. Other economists view Japan’s long-range prospects a little more favorably, placing greater weight on factors other than population. Still, there is no question that a shrinking and aging population will create a drag on economic growth.

Kaneko Ryūichi of IPSS characterizes Japan’s demographic trajectory as “off the rails” from the viewpoint of population science. Moreover, he predicts that the population will continue to age and shrink at an unequaled pace throughout the twenty-first century. The reason for this pessimistic outlook is the phenomenon of “population momentum,” also known as population-lag effect.

Japan’s total fertility rate—the average number of children born to each woman—is currently under 1.5. This represents a slight rebound from the all-time low of 1.26 in 2005, but it is still far below the replacement level of 2.07 needed to maintain a constant population. Moreover, even under a hypothetical scenario in which fertility returned to the replacement rate as of 2010 and remained there, the population would continue to shrink for some time (see red line in figure 2). Owing to the dwindling number of women of childbearing age, the number of births would continue to decline until 2040 or 2050, even with a higher birthrate. Furthermore, overall mortality is bound to keep rising as the large elderly population ages further. This built-in lag virtually guarantees that Japan’s population will continue to shrink for another 60 to 70 years. 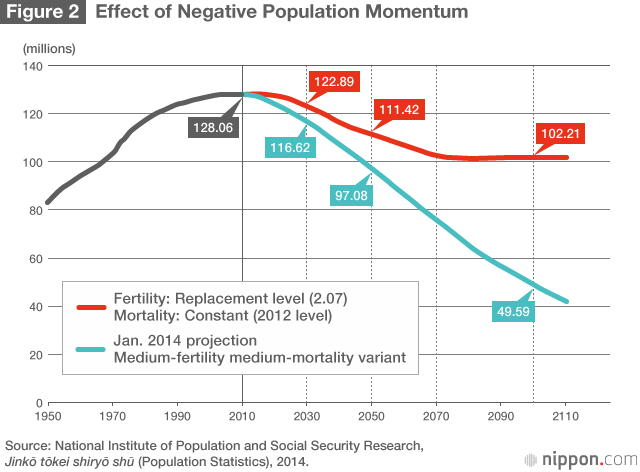 That said, a higher birthrate would certainly help stem the pace of population decline, and the long-term impact could be dramatic, as suggested by the diverging trend lines of figure 2. The goal now should be to nudge Japan’s population growth as far in the direction of the red line as possible.

Let us now look a little more closely at Japan’s changing age structure and its repercussions, focusing on the elderly population. 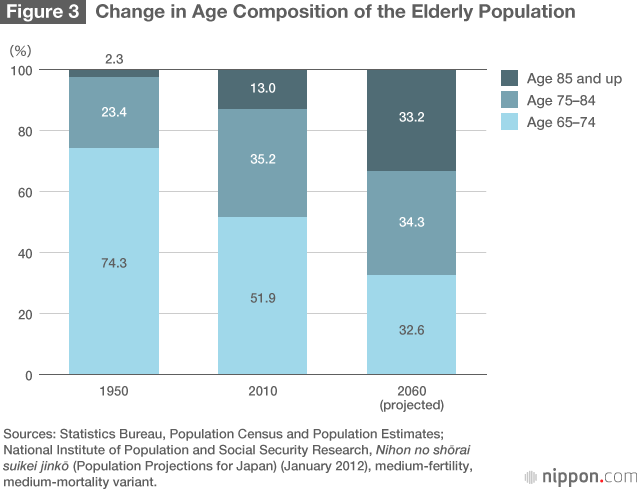 Of course, some individuals manage to stay healthy and independent even as centenarians, and future seniors will doubtless benefit from advances in medical science. Nonetheless, the incidence of health problems and conditions requiring nursing or custodial care generally rises with age.

The number of dementia patients reported missing in Japan has risen each year since the National Police Agency began keeping statistics. In 2016, it hit 15,432, an increase of 3,224 over the previous year. And with more seniors living alone, it can be assumed that a substantial number of cases go unreported.

In Japan, where young people traditionally migrate from the countryside to the major cities, there is a tendency to associate demographic aging with the outlying regions. But in regional population projections,Tokyo Metropolis and its highly urbanized neighbor Kanagawa Prefecture rank alongside Okinawa Prefecture as jurisdictions where the elderly population is expected to grow more than 50% between 2010 and 2040. Meanwhile, an increase of 40%–50% is projected for Saitama and Chiba Prefectures (also in the heavily populated capital region) and 30%–40% for Kyoto and Osaka Prefectures. Many urban areas in Japan already suffer from a serious shortage of nursing-care workers and facilities. The IPSS's projections raise the specter of a vast urban class of displaced and abandoned elderly people, or kaigo nanmin (nursing home refugees).

The aging of the Japanese population also has profound political implications. The percentage of elderly voters has jumped since 1960, while the ratio of those under 35 has fallen sharply, and the trend is certain to continue (see table).

Percentage of Electorate by Age

In 1960, younger voters made up more than 40% of the electorate, while the elderly constituted less than 10%. By 2060, the tables will have turned, with senior citizens accounting for almost half of all voters. Compounding this growing power imbalance is the fact that the young are less likely to vote. By age group, turnout for the 2009 general election was lowest among voters age 20–24, at 46.7%, and highest among those age 65–69, at 85%. In such a “silver democracy,” the needs of younger individuals and families in areas including employment, childcare, and education may end up taking a back seat to the demands of elderly voters, who could make our political leaders pay dearly for any cuts in benefits.

Every Means at Our Disposal

The foregoing summary, based on Kaneko’s June lecture, presents a rather grim picture of Japan’s future. But the presentation also included a discussion of strategies to slow down Japan’s population implosion and mitigate its impact. In the following, I provide a summary of each of these proposals, accompanied by some observations of my own.

Offer pension bonuses as a fertility incentive  One option is to create an incentive for having more children by adding to a woman’s pension benefits for each child she has. The bonus could increase for each additional child: for example, ¥10,000 for one child, ¥30,000 for two children, ¥60,000 for three children, and so forth. This would cost the government nothing until women reach the age of eligibility (currently 65). In addition, by easing families’ financial anxieties about the future, it should help boost consumption and stimulate the economy.

It seems to me that such a system would also need to incorporate some mechanism for rewarding divorced fathers who contribute to childcare and the costs of education. Such a policy may also face opposition from those who object to using cash incentives to influence such an important personal decision.

Facilitate adoption of unwanted children  In a country where bureaucratic red tape makes adoption an extremely time-consuming and onerous process, the government took a step toward facilitating adoption of orphans and preventing needless abortions by legalizing private-sector adoption agencies. Much work remains to be done, however, in terms of establishing a database to match childless couples with expecting women and keeping unscrupulous operators out of the market.

Expand immigration Japan’s immigration laws are very strict, and proposals to loosen them face widespread resistance. But the fact is that the economy is already dependent on foreign labor to a significant degree, and our political leaders will need to confront this topic head-on at some point. That said, Kaneko does not believe that Japan can depend on immigration to solve the problem of labor shortages, particularly since other countries in East Asia are facing similar demographic challenges and are likely to compete fiercely for labor from countries with young, growing populations.

Promote participation by women and the elderly in the labor force  Although highly educated and capable, Japanese women are less likely to rise to positions of responsibility in business or government than their counterparts in other advanced industrial countries. One way to ease the coming labor shortage is to encourage women’s participation in the labor force by expanding their career opportunities and work options. This means providing access to high-quality day care and offering more flexible work arrangements, such as telecommuting.

With regard to the elderly, Kaneko points out that by 2060 residual life expectancy at age 65 is expected to be 22.3 years for men and 27.7 years for women—up from 11.6 and 14.1 years in 1960. People are staying healthy and active longer, and this trend is expected to continue. Younger seniors are also increasingly comfortable with information technology. In a 2015 survey, 68.4% of men and 27.5% of women in their sixties said they were confident using computers, as compared with 48.1% of men and 15.6% of women in their seventies. Industry should be able to find ways of putting these and other skills to use.

Technological innovation  In the future, technological advances will doubtless allow computers and robots to supplement human labor in ways we can scarcely imagine today. Instead of succumbing to fears about artificial intelligence replacing human beings, we need to make the most of its potential to support Japanese society as the population ages and shrinks.

There is no magic bullet. Each of the strategies above has its limitations. Nor is the above list exhaustive by any means. By marshaling all the policy tools at our disposal, we can counter the impact of negative population growth before it is too late and ensure a bright future for young and old alike. But we need to start now.

(Originally published in Japanese on July 4, 2017. Banner photo: Seniors work out with dumbbells and chewing gum at a temple in Tokyo’s Sugamo district on Respect for the Age Day, September 21, 2015. ©Jiji.)