Has Japan Learned the Lessons of Past Pollution Crises?

Society Dec 14, 2018
Fifty years after the government’s belated acknowledgment of pollution’s heavy toll on human health, journalist Masano Atsuko revisits the shameful history of Japan’s “four big pollution diseases” and questions whether the nation has truly learned from those tragedies.

It was a half-century ago last May that the government first officially recognized the existence of serious pollution-related illnesses in Japan. For the victims of itai-itai disease, it was a very long wait.

Itai-itai disease was the first of the “four big pollution diseases” whose outbreaks set the stage for environmental activism in Japan. The others were Minamata disease, Niigata Minamata disease, and Yokkaichi asthma.

Itai-itai disease was the name given to a collection of painful and debilitating symptoms that broke out among inhabitants of the Jinzū River basin in Toyama Prefecture not long after World War II. It was caused by exposure to cadmium, which Mitsui Mining and Smelting had been dumping into the river for decades, polluting the water used for drinking, cooking, and irrigating crops downstream. Long-term ingestion of the cadmium led to kidney damage, soft or brittle bones, and the intense shooting pains from which the condition got its name.

The effects of the mine’s effluent on fish and vegetation had been apparent from the 1930s. A local doctor reported the first official cases of itai-itai disease in 1946. It was not until May 1968, a full 22 years later, that the Japanese government officially acknowledged a causal link between itai-itai disease and industrial pollution from local mining and smelting operations. 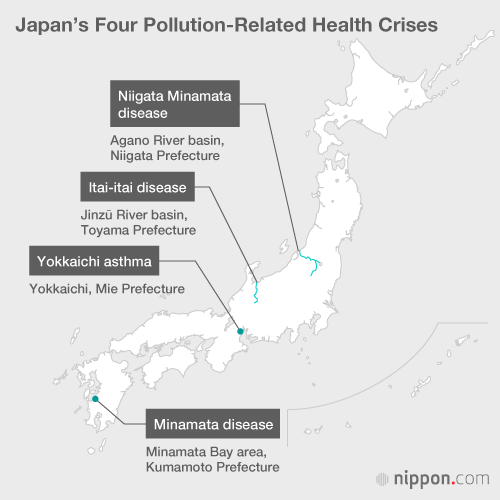 Minamata disease was first identified among residents of Minamata, Kumamoto Prefecture, in 1956. The cause was severe mercury poisoning. An acetaldehyde plant operated by Chisso had been releasing wastewater contaminated with methylmercury into nearby waters since 1932, causing organic mercury to bioaccumulate in fish and shellfish that were later consumed by local inhabitants. The victims experienced numbness of the hands and feet, loss of peripheral vision, hearing loss, paralysis, convulsions, and, in quite a few cases, death. Furthermore, the afflicted and their families faced stigmatization and discrimination by the local community as Chisso evaded responsibility with the government’s complicity.

In 1965, in the midst of this inaction, a second outbreak of Minamata disease occurred, this time in Niigata Prefecture. Once again, the culprit was mercury-contaminated wastewater from an acetaldehyde plant, this one operated by Shōwa Denkō in Kanose village along the Agano River. By 1966, the source of the pollution and the cause of the ailment were indisputable. Nonetheless, it was not until September 1968 that the Japanese government officially took the position that Minamata disease was a pollution-related illness caused by mercury discharged from the Chisso and Shōwa Denkō plants.

Yokkaichi asthma was a general term for the epidemic of respiratory diseases and disorders that broke out in the city of Yokkaichi in Mie Prefecture beginning around 1960. The cause was air pollution from the Yokkaichi petrochemical complex. Almost immediately after the complex opened in 1959, cases of bronchial asthma, chronic bronchitis, emphysema, and other respiratory ailments rose sharply, as the refineries and chemical plants belched sulfurous smoke into the atmosphere.

In 1967, a group of Yokkaichi asthma victims filed a lawsuit against 6 of the 13 companies operating in the complex: oil refiner Shōwa Yokkaichi Sekiyu; petrochemical manufacturers Mitsubishi Petrochemical, Mitsubishi Monsanto Chemical, Mitsubishi Kasei Kōgyō, and Ishihara Sangyō; and electric utility Chūbu Electric Power. In 1972, the court ruled the defendants jointly and severally responsible and ordered the payment of compensatory damages. Finally, the tide was turning against the big polluters.

Japan’s four major pollution-related illnesses were all products of the postwar era of rapid economic growth and industrialization, a time when public health was sacrificed to economic prosperity. Times have changed. Yet seven and a half years after the Fukushima Daiichi disaster, the lessons from those earlier tragedies bear repeating.

The first is to heed early signs of trouble. In each of the four pollution cases, plants and animals were affected first. In both areas hit by Minamata disease, the effect of mercury contamination was apparent first to local fishermen, who complained of dwindling catches. The cadmium that caused itai-itai disease initially affected trees and rice as well as fish. In Yokkaichi, bad-smelling fish were an early sign of more dire problems to come.

The second lesson is the need to move quickly to establish, acknowledge, and address the causes, instead of delaying action while the problem spreads and escalates. Many fish were found dead in an incident in Minamata Bay back in 1952, four years before the first cases of Minamata disease were reported. Although effluent from Chisso’s chemical plant was the obvious suspect, no chemical analyses were carried out at the time. In 1957, after the outbreak of Minamata disease, Kumamoto Prefecture sought to mobilize the Food Sanitation Act to impose a ban on fishing in Minamata Bay, but the Ministry of Health and Welfare refused to allow the ban “without clear evidence that all the fish and shellfish in the area are contaminated.”

In 1958, when the Ministry of Health and Welfare expressed the view that Chisso was the source of contamination, Chisso vigorously denied all responsibility. At the same time, it quietly began discharging its untreated wastewater into the mouth of the Minamata River, instead of Hyakken Harbor in Minamata Bay. This had the effect of spreading the contamination and its health impacts all up and down the coast of the Yatsushiro Sea. The Ministry of International Trade and Industry was aware of Chisso’s maneuvering, and in October 1959, it ordered the plant to go back to discharging the effluent into Minamata Bay—not, however, to stop dumping toxins into coastal waters. By this time, Chisso’s management was aware that animal experiments carried out in its own factory hospital had identified the cause of Minamata disease as mercury in the chemical factory’s wastewater. But the company concealed these findings from investigators and the public.

Around the same time, a team of Kumamoto University researchers identified mercury in local fish and shellfish as the cause of Minamata disease. A task force established by the Health Ministry’s Food and Sanitation Investigation Committee to study the problem accepted those findings and conveyed them in its report. But Ikeda Hayato, the Minister of International Trade and Industry, pronounced the conclusion “premature,” and the task force itself was disbanded. Meanwhile, the Japan Chemical Industry Association further muddied the waters by publishing competing theories, including the notion (already discredited) that explosives were responsible.

In November 1959, a group of Diet members traveled to Minamata to assess the situation firsthand and was met by protests from fishermen and the families of patients. Public criticism of Chisso began to escalate, but the company’s top management had an answer: That December, it announced the installation of a new wastewater treatment system. In a special ceremony, Chisso’s president drank a glass of water—purportedly discharged from the plant and treated by the new system—to demonstrate its safety. However, as revealed by court testimony in 1985, the system did nothing to remove the methylmercury that was the source of the problem, and Chisso’s discharge of the highly toxic substance continued right up until 1968.

The impact of these delays was critical. In 1962, three years after Chisso’s sham safety demonstration, organic mercury was found in the tissue of a five-year-old previously thought to have died from cerebral palsy. This and subsequent studies revealed that organic mercury (unlike heavy metals) could pass through the mother’s placenta and concentrate in the tissue of the fetus, causing congenital Minamata disease.

The Courts to the Rescue

The Japanese government officially acknowledged Chisso’s mercury-contaminated effluent as the cause of the problem only in 1968—the same year that an economical mercury-free option for manufacturing acetaldehyde became available. Placing corporate profits over public health, the government had dragged its feet for a decade while the human casualties mounted.

This brings us to the third lesson to be learned from the tragedy of Japan’s four major pollution-related health disasters: the important role of the courts and independent advocates and the need for a victim-friendly compensation system.

It was not the government but independent professionals and activists who stood up to big business and championed the rights of the victims. With the help of dedicated lawyers, physicians, and scientists, victims were able to prove the companies’ culpability in court and successfully sue them for damages.

The first legal victory came in September 1971, when a district court ruled in favor of a group of Niigata Minamata disease victims. Another court ruled for a group of Yokkaichi asthma victims in July 1972, and a district court decision that August upheld damages awarded to victims of itai-itai disease. Victims of the first Minamata disease outbreak won their lawsuit in March 1973. In each case, the amount awarded to the plaintiffs became the basis for broader compensation agreements between the polluters and the victims.

These developments paved the way for the September 1973 passage of the Pollution-Related Health Damage Compensation Law, which created a system for automatic compensation of certified victims. Unfortunately, the certification process often took years, and under the narrow diagnostic and geographical criteria established by the government, many victims were denied certification altogether. Just over 2,000 (Chisso) Minamata disease patients have been certified to date, out of more than 20,000 applicants. (Of course, this tally excludes those victims who never applied for certification, whether out of ignorance, fear of stigmatization and harassment, or other reasons).

In the case of Niigata Minamata disease, roughly 700 patients have been certified, less than a fourth of those seeking relief. The government has certified fewer than 200 victims of itai-itai disease, limiting recognition to those suffering from multiple symptoms including osteomalacia. However, there are close to 400 patients who require treatment or monitoring for other effects of cadmium toxicity, such as kidney damage. Victims of these three illnesses have filed multiple lawsuits over delays in the certification process and petitioned the government repeatedly to revise the criteria.

Yokkaichi asthma was a somewhat different case, in that the sulfur dioxide pollution deemed responsible for the local epidemic was relatively widespread. Under the Pollution-Related Health Damage Compensation Law, residents of 41 designated areas in nine prefectures (Tokyo, Osaka, Kanagawa, Chiba, Aichi, Hyōgo, Shizuoka, Fukuoka, and Okayama) were initially qualified to apply for certification as victims of air pollution. However, in 1988 those designations were removed on the grounds that sufficient “progress was being made.” Since then, residents of Chiba, Osaka, Kawasaki, and Kurashiki have again turned to the courts to hold local polluters responsible.

The Rio Declaration on Environment and Development, adopted at the 1992 United Nations “Earth Summit,” is a summation of lessons learned from the impact of environmental damage worldwide. Of particular pertinence to Japan’s “four big pollution diseases” is Principle 15 (prevention): “Where there are threats of serious or irreversible damage, lack of full scientific certainty shall not be used as a reason for postponing cost-effective measures to prevent environmental degradation.”

Has Japanese society learned its lesson from the suffering of thousands of pollution victims?

On March 11, 2011, a tsunami triggered by the Great East Japan Earthquake disabled the Fukushima Daiichi Nuclear Power Station, resulting in one of the worst nuclear accidents in history. Seven and a half years later, with concerns about childhood thyroid cancer on the rise, a full accounting of the accident and its impact on human life is still a long way off. How much has Japan really learned in the past 50 years?