The Rot at the Heart of Japan’s Student Clubs

Society Aug 3, 2018
Japanese national curriculum guidelines stipulate that student participation in extracurricular activities must be independent and voluntary. The reality, however, appears to be one of coerced “independence,” robbing students of opportunities to think for themselves. This essay considers the Nihon University American football club’s flagrant penalty in the light of the current state of junior high and high school student clubs.

“Take Him Out in the First Play”

It is unlikely that American football—which would never be considered a major Japanese college sport—has ever received such attention as it did following the game between Nihon University and Kwansei Gakuin University on May 6, 2018, when a Nihon University defensive lineman injured the Kwansei quarterback with a dangerous tackle from behind well after the play had stopped. This vicious play received considerable media attention for days on end.

Even more than the unsportsmanlike conduct of the tackle itself, though, the incident drew interest for the background from which it emerged, as well as the ways in which the players, coaches, and schools reacted. The Nihon University coaching staff received much criticism when they asserted that they had not intended for their player to injure the opposing quarterback when they instructed him to “take the quarterback out” in the first play of the game.

Below I set aside the particulars of the incident itself, and instead turn my attention to what the incident tells us about the state of extracurricular athletic activities, as well as the guidance and leadership of these sports teams.

Unable to Decide for Oneself

The aspect of this incident which most people will recall is likely to be the press conference held by the Nihon University player in question, Miyagawa Taisuke. Having just turned 20 and reached his majority at the time, he attended the press briefing without pseudonyms or other disguise and admitted that he had tackled the opposing quarterback with intent to harm.

He might have gotten away with such excuses as claiming that he had made a mistake during play or otherwise gotten carried away in the heat of the moment. Instead, he frankly confessed that it was deliberate. After such a statement it should surprise no one if criminal proceedings were instigated. He seemed to make his declaration with a firm conviction.

That conviction was clear to see in this last part of the written statement that he read out at the press conference:

The reason for this incident was that I was unable to make the decision not to do it, even though I was instructed to do it by the head coach and his assistant. Thus, I followed their instructions and carried out this illegal action. As a result, I injured a player on the opposing team through this contemptible act, and I have worried about and regretted it ever since I was ejected from the game. Accordingly, I have resolved to write this statement in the belief that making the truth clear is the first step to redemption.

The Nihon University defensive lineman says he was unable to recognize that it was wrong for the head and assistant coaches to instruct him to “take [someone] out,” and made the dangerous tackle as instructed. He therefore apologized, saying that the biggest problem lay with his own impaired judgment.

No Education in a Climate of Fear

At a press conference Kwansei Gakuin University team staff held four days after the Nihon University defensive lineman’s press conference, there were indications that they understood the dilemma that the player in question faced. When asked by a reporter about the state of school athletics, Toriuchi Hideaki, head coach of the Kwansei Gakuin football team, replied as follows:

In collegiate sports, sports is fundamentally about thinking for oneself, and one’s personality is shaped by that. . . . If you ask whether there can be education in a climate of fear, of corporal punishment, I don’t think it’s possible. There are various athletic contests nowadays, but if they are still being conducted in such conditions, then I think this is a golden opportunity for reform. And I think it applies at all levels, including elementary, junior high, and high school, too.

Toriuchi believes that the significance of sports leadership, from elementary school to college, lies not in doing what one is told out of fear of the coach, but in constantly exercising one’s own judgment.

It is highly significant that Toriuchi spoke of this applying at all levels, from elementary school on up.

Colleges are also institutes of education, and as with lower levels of school, leadership in extracurricular activities is part and parcel of the work of education. But how much attention is paid to showing participants how to think for themselves in these clubs? 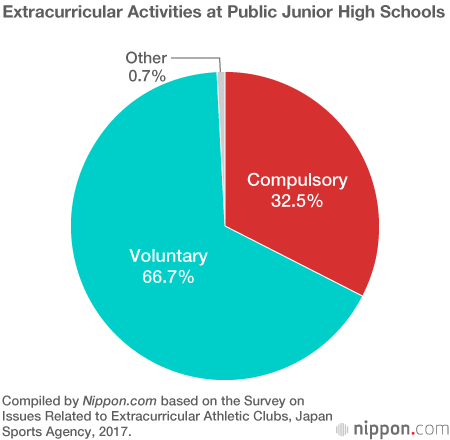 In addition, whether compulsory or not, some 90% of intermediate and high-school students participate in extracurricular clubs. As I wrote in my 2017 Burakku bukatsudō (Student Clubs Gone Bad), given that some 60%–70% of students who were in athletic clubs in high school drop out of such clubs when they get to college, it seems likely that there is some degree of coercion to participate, even if it does not necessarily rise to the level of compulsory enrollment for all students.

Pressured Not to Quit

Another curious circumstance is that these supposedly independent extracurricular activities include something called “independent practice.” Practice before school hours on weekdays or on the weekends is sometimes referred to in this way. Nonetheless, not only do the faculty advisors attend these “independent practice” sessions, but so do almost all students, just as though they were compulsory.

And this disregard of the students’ supposed independence may be found not only in enrollment in these clubs, but also in withdrawing from them, when faculty advisors make strenuous efforts to retain students who want to quit.

When a student at one high school applied to withdraw from a club, the club’s faculty advisor yelled at the student to think of the other club members, blasting the student in question as “worthless.”

It seems unlikely that the reason for such abuse was a genuine concern for “the other club members.” Rather, when faculty advisors have their own identities bound up with these extracurricular activities, they perceive students who try to leave as disruptive elements who are rebelling against the advisors themselves. They thus come to think of guiding and persuading these students in and of itself to be part of the work of extracurricular activity leadership, and moreover, to view such efforts as a demonstration of their leadership ability as teachers.

To be sure, students should not expect to simply have everything their own way. Extracurricular activities, however, are predicated on the independent participation of the students themselves. There is thus no legitimate reason for faculty advisors to get angry at children who don’t want to take part.

The Moral of the Story

This is not to say, of course, that extracurricular activities do nothing but harm. But for these clubs to be truly independent activity, there needs to be a greater degree of freedom where exercising this independence is concerned.

We must not raise people who simply faithfully carry out orders from above; our task is to foster young people who are capable of interpreting for themselves what those orders mean. If extracurricular activities are merely an exercise in lip service to the notion of independence, while in fact being used to constrain students and rob them of their freedom—and even of opportunities to think and make judgments for themselves, then it is miseducation.

The unsportsmanlike tackle by the Nihon University American football team was the result of the accumulation of many instances of just such miseducation.

Something good did come out of all of this, however.

The way the player in question acted during the game is a serious matter. Immediately after the tackle, however, he recognized that what he had done was wrong, and did not equivocate about the need to apologize to the wronged party at the earliest opportunity. More than that, he honestly confessed his misdeed in a public venue.

The sincerity which arose from the player’s contemplation of his own actions draws our concern instead to the problems with the leadership of these extracurricular activities.

Public opinion has focused less on the unsportsmanlike nature of the tackle itself and more on the cruelty of the leadership by the coaches. The power to change what constitutes leadership in extracurricular activities may yet be found in a society which is aligning itself in such a fashion.

Now that public opinion has been aroused by this incident, I have high hopes for the influence it is capable of exerting.