What’s in a Name? Mixed Race and Identity in Japan

Society Dec 11, 2018
The number of Japanese citizens with mixed roots is rising. This article focuses on the wide variety of names for people in this group and the social background surrounding them since World War II.

Ōsaka Naomi’s victory in the 2018 US Open tennis tournament set off intense discussion in the Japanese media and social networks about hāfu—a word deriving from “half,” meaning people with mixed roots—literally, those who are “half Japanese.” Among the questions under debate were what it means to be hāfu and what it means to be Japanese.

Hāfu is an ambiguous term. It emerged in the media around the 1970s, and many have used it self-descriptively as a way of expressing identity. It sometimes has a positive nuance, but can also be taken as negative or even discriminatory.

In October 2018, Tamaki Denny was elected as governor of Okinawa Prefecture. In a 2016 article, he had shared his thoughts on hearing himself described using the word. “The fundamental problem with calling someone a hāfu is that it carries a sense of condescension and discrimination from the people using words to categorize toward those being categorized.”

What does the word hāfu typically mean? A 2016 article in the Asahi Shimbun noted: “One in every 50 babies born in Japan is a hāfu—having one parent from a foreign country—amounting to 20,000 children every year.” Meanwhile, the sociologist Mary Angeline Da-anoy has described the word as generally used for children born in international marriages.

Statistics from the Ministry of Health, Labor, and Welfare show that there have been an average of more than 30,000 international marriages each year in Japan over the past decade, representing around one in 30 of all unions. The media uses the ministry’s data on parent nationalities to report the number of hāfu children born each year to international couples.

Yet, this data does not accurately convey the total number of hāfu living in Japanese society.

For example, among people I have interviewed for my research or appearing in the media, there are those born overseas to one parent who is a Japanese citizen or of Japanese ethnicity and another who is from that country, who call themselves hāfu or are described as such after moving to Japan. This is also the case for many who came to Japan in the 1990s after visa requirements were relaxed for Nikkei (descendants of Japanese emigrants).

As the ministry statistics only include people born in the country, they do not account for many hāfu living in Japan.

There are also those—such as my mother, born to an Okinawan woman and a US soldier stationed in the prefecture—whose parents are or were not married, but are still called hāfu. This shows that the term cannot be clearly defined in terms of nationality or international marriage.

It is also impossible to easily describe the reality of being a hāfu. As well as nationality, individual experience and identity varies according to such factors as where one is born and raised, one’s appearance, where one’s parents have lived, culture, education at local or international schools, gender, and name—which may be written in katakana, kanji, or hiragana.

The ambiguity of the word frequently leads to doubts over whether hāfu are Japanese or foreign. Due to the fact it is widely known, however, many people fall back on using it when questioned about their identity as an easily accepted shorthand for their mixed roots.

Although now the most popular term, hāfu is far from the only way of expressing mixed roots in Japanese.

In the immediate postwar era, the word konketsuji (mixed-blood child) was used particularly for the children of Japanese women and US soldiers. Later kokusaiji (international child) became popular among support organizations, social activists, and researchers to substitute for konketsuji, which was seen as discriminatory. It was particularly common among support groups for stateless children in Okinawa and those helping children with Philippine roots.

Daburu (double), emphasizing the positive, double heritage of language and culture, emerged as an alternative to hāfu, which was considered negative. It spread in the 1990s via social movements and film. While some take it as approbatory, it has also received criticism as not matching reality. The children of one hāfu and one Japanese parent may be known as kuōtā (quarter), although the word has also come to be applied to people with roots in more than two countries. Its meaning is in flux and can vary by speaker.

The popularity of the English term “mixed race” has led Japan to import it as mikkusu, which can be used for people with roots in multiple countries. Some find this way of thinking positive, while others feel it leaves them out of place. The word Jafurikan is a portmanteau of “Japanese” and “African,” while the English word “Blasian” has entered Japanese as Bureijian.

Amerajian (Amerasian) was particularly prominently used by promoters of alternative schools and other support groups in 1990s Okinawa. It originally described the children of Asian women and US soldiers in the immediate postwar era. The Hawaiian term hapa is also sometimes used in Japanese for people with mixed heritage, especially in social media communities.

These terms vary in scope, meaning, social significance, political meaning, and history, and are also used for different purposes. Words used in social activism have played an important role in emphasizing rights. However, the complexity of terms is a factor that has hampered public understanding of people with mixed roots. 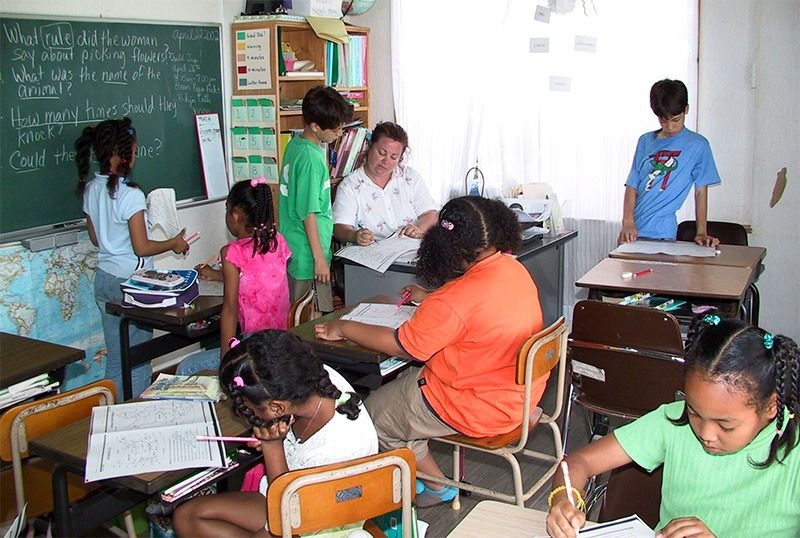 Children at the Amerasian School in Okinawa are taught in both Japanese and English. Photograph taken in Ginowan, Okinawa, in 2002, as part of a series on the thirtieth anniversary of the reversion of Okinawa to Japan. (© Jiji)

The Social Background of Postwar Japan

The changes in terminology detailed above are closely connected with Japan’s postwar history.

After the end of the Allied Occupation in the early 1950s, the Japanese media was filled with stories of the social issue of konketsuji. While earlier, the term konketsu (mixed blood) had mainly referred to children with a Korean, Taiwanese, or Ainu parent, in the postwar period it was almost always used for the children of Japanese mothers and US soldiers.

The issue was strongly associated with the image of a defeated country that had yet to recover economically. Yet from the late 1950s, as Japan moved into its high growth period, media interest declined.

Western culture in the form of television, films, fashion, and music poured into Japan from the 1950s into the 1960s. Hairstyles and fashion trends sparked by Audrey Hepburn and Twiggy contributed to a sea change in attitudes toward Western countries. Former enemies became exemplars of a yearned-for ideal and an image of material comfort.

Economic recovery and Western influence were the basis for the emergence of the word hāfu, and representatives in the worlds of sports and entertainment rose to prominence. The term thereby came to carry an overly romanticized image. 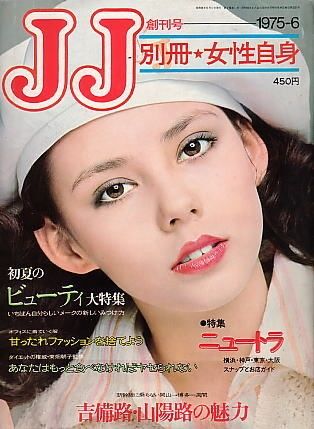 Among the many new fashion magazines published in the 1970s and 1980s, it was extremely common to feature a hāfu model on the cover. Photograph shows the inaugural June 1975 edition of JJ, featuring the model Keren Yoshikawa.

At the same time, this was the era of the Nihonjinron boom, which stressed the ethnic and cultural unity of the Japanese people, leaving no place for the hāfu.

International marriage trends saw a shift from foreign husbands being in the majority to foreign wives being more common from 1975. There was a major rise in the number of Japanese men marrying women from other Asian countries from the 1980s. As the pace of globalization increased, the number of Japanese people marrying people with roots in a range of countries also grew.

In the 1990s, the words kokusaiji and daburu were advocated by social movements as alternatives to the commonly used terms hāfu and konketsu, as a variety of organizations battled for the rights of people with mixed heritage.

Japan’s growing presence in the international community boosted the number of its citizens studying abroad, taking working holidays, or contributing to development work or corporate expansion overseas. This led to a further rise in international marriages and more children with mixed roots growing up in Japan.

The country’s postbubble economic crisis and deepening labor shortage prompted an amendment of the Immigration Control and Refugee Recognition Act in 1990, creating a new visa for foreigners of Japanese descent. Many immigrants from South America entered the country. Around the same time, greater efforts were made at local level to support children with foreign parents or with links to other countries.

While the government has focused on building successful multicultural communities since the late 2000s, the image of homogenous Japanese supporting “foreigners” remains a strong element in the surrounding discussion. This means ignoring the needs of hāfu, who regularly encounter everyday prejudice. They are forced to deal themselves with bullying and discrimination in employment and marriage.

On the other hand, as hāfu communities grow, there are more people to communicate their experience and issues of identity to the general public. Many pursue activism via social media, steadily increasing the awareness of the prejudice they face.

There has been a tendency in Japan to imagine hāfu as celebrities or athletes, but as they are getting greater opportunities to relate their experiences, these stereotypes are eroding.

There is lively debate at present about the government’s plan to allow more foreign workers to enter the country. What is missing from this discussion is that Japan is already diverse, its population including not only many hāfu but also Zainichi ethnic Koreans and people from other countries who have naturalized as Japanese citizens.

After reviewing all the different words that exist and their background, questions still remain. Ultimately, what is the best word to use? What does it mean to be a hāfu? What are their experiences?

However, other people cannot decide what someone’s identity is, and there is no need to do so. The reason that there are different terms like daburu, hāfu, and mikkusu is that people have different reasons for using them, such as “I want to express the connection between the two aspects of my identity,” “I want to tell people what I am in a way that is easy to understand,” or “I want to convey my complexity.”

After gaining a general idea of the daily reality for people with mixed roots in Japan, it is important to listen to how they describe them as individuals. Rather than putting people in boxes, their complex reality should be taken as it is. This is a critical approach in today’s diversifying Japan.

(Originally published in Japanese on November 13, 2018. Banner photograph: The author’s mother as a young girl, at right, with her friend. Photograph taken in Okinawa. Courtesy Shimoji Lawrence Yoshitaka.)