Learning from the Experience of Mixed-Race Japanese

Society Dec 13, 2018
Sociology researcher Shimoji Lawrence Yoshitaka looks at how mixed-race citizens are treated differently in Japanese society, presenting some of the stories of the people he has interviewed.

Five years after the mass fatalities of the Battle of Okinawa, in 1950, my mother, Kinjō Midori, was born to my Japanese grandmother and US soldier Clarence Lawrence, who was stationed at Naha Air Base.

My grandmother was working as a housekeeper for the US military when she met Lawrence, a mess-hall cook. I heard that he was discharged immediately after he learned of my grandmother’s pregnancy, and he returned to the United States without seeing his child’s face.

The two exchanged letters for a while, but this ended after they entered new relationships and got married. When my mother got into contact with my grandfather, he was no longer living at the same address. When she finally found him with the help of the US Air Force, he was in his fifties. From then on, she communicated with him by letter. 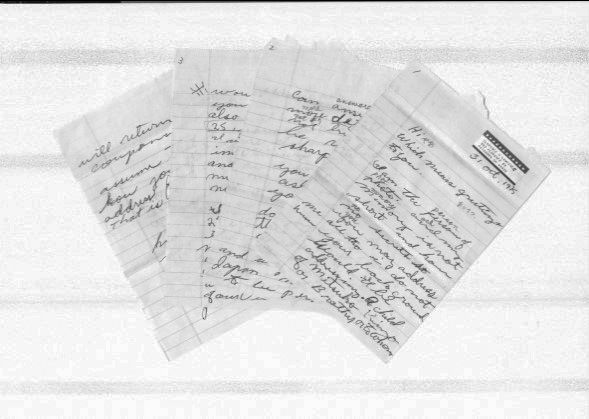 A 1975 letter from the writer’s grandfather to his mother.

My grandfather strongly wished for my mother to go to the United States and invited her, saying that he would raise the money somehow. But then my mother received a letter sent secretly from his wife, discouraging her from making the journey, and telling her that her father was thinking of quitting his job for the severance money and even gambling to try and raise the funds required.

After this letter, my mother gradually gave up the idea of going to the United States. In the end, they were unable to meet before my grandfather’s death. When I asked her about him, she was silent for a few moments before breaking into tears and whispering, “I wanted to meet him.”

The fact that my mother is an Amerasian, or hāfu, was a major factor in my decision to research people in Japan with mixed roots. There were many people like my mother in postwar Japan and reporting on mixed-race children made it a prominent social issue. 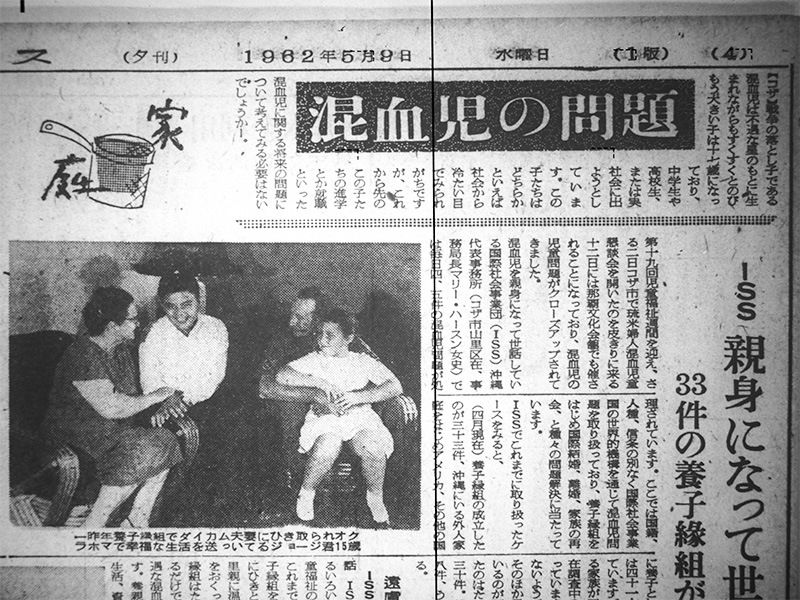 An Okinawa Times story from September 5, 1962, on “The Problem of Mixed Race Children.”

“There were several other children like me in my school; each of us experienced very different treatment,” my mother said. “For my part, I never felt that I couldn’t be proud, and nobody said anything bad to me because of my connection to America or the bases.” Yet when she was an adolescent, she encountered clear cases of prejudice and discrimination. For example, once when she was looking into a luxury brand store, an employee saw her and quickly shut a display case of jewelry and accessories. There have been times when she has sensed the dislike of others and been reminded each time of how she appears. Even in her sixties, people she meets for the first time will compliment her on her Japanese and ask her how long she has lived in the country. 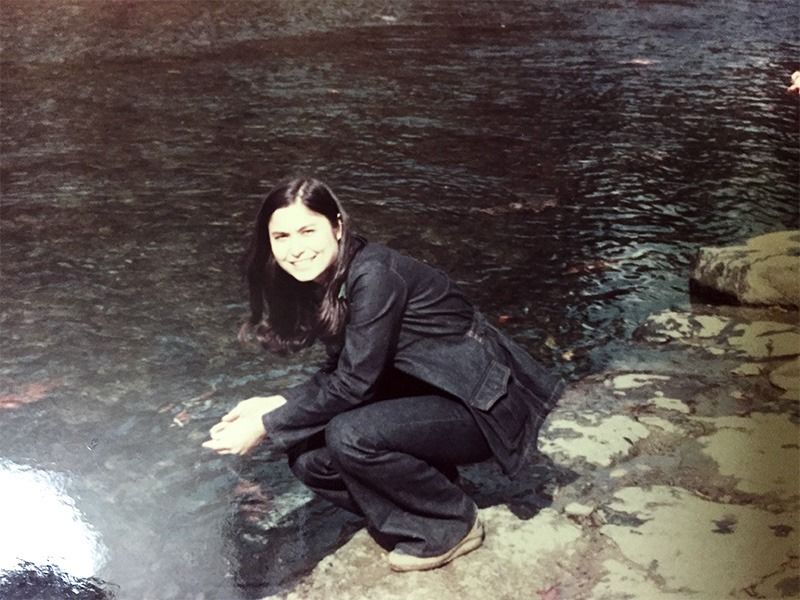 The writer’s mother as a young woman. She sometimes met with prejudice due to her appearance.

Hāfu have been presented as glamorous in the media in recent years. In the course of my surveys of people with mixed roots, however, I have sometimes felt that very little seems to have changed over the decades since my mother’s youth in terms of prejudice and misunderstanding.

The names of the interviewees have been changed in the stories that follow.

In my job, I’m regularly asked if I’m a foreigner. All my work is at customers’ homes, whether I’m fitting air conditioners or doing electrical work. People are shocked when I announce the name of my company and walk in. It’s not so bad if they ask if I’m a hāfu. But some people straight up ask me where I’m from. ‘Now I see why you’re so good at Japanese,’ they tell me, when they hear I’m a hāfu. Sometimes there are customers who don’t like foreigners and they complain, demanding to know why the company sent someone like me. Even if I say I’m Japanese, they won’t accept it.”

The managers who do the rounds of the branches always ask me if I can speak English. There will definitely be one customer each day who asks me where I’m from. And people tell me my Japanese is good and ask how long I’ve been in Japan. Not many people ask if I’m a hāfu. Ultimately, people think I’m 100% foreign because my face doesn’t look Japanese.”

Another serious aspect of working life is discrimination against hiring hāfu.

“I arrived at an interview with my resume at the agreed time, but from their reaction when they saw me, I clearly wasn’t who they were looking for. I’d applied using the name Seki, you see . . . The atmosphere was quite negative. ‘Yes, thank you, that will be all. We have lots of other people to interview,’ they brushed me off. As I was heading out of the room, I saw my laces were loose, so tied them by the door. The interviewers must have thought that I was gone and made some comments about how I was a foreigner and they couldn’t hire me. I quietly opened the door, so they wouldn’t notice me . . .”

“When I arrived, the interviewer asked me in surprise, ‘What, are you Tanaka?’ I replied, ‘Yes, I’m a hāfu raised in Japan, but probably I look more black than Japanese. Is that OK?’ ‘Please wait a moment.’ The interviewer talked to a superior for about two minutes before telling me I couldn’t be considered for any of the security jobs. ‘We can’t hire a black guard. I’m sorry but it’s impossible. Our customers would wonder why our company was hiring foreigners.’ The interviewer thought a black guard would be bad for the company’s image.”

Hāfu also face prejudice outside schools and workplaces, such as in daily life when they are simply walking outside, traveling on a train or bus, or doing some shopping.

When I was around seven years old, I was just walking along when an elementary school student on a bicycle stopped in front of me and said, ‘Wow, a foreigner.’ Another time I was going home from soccer practice when I was nearly hit by a car. ‘That was close,’ I was thinking, when the driver wound down the window and said, ‘Hey, foreigner. Go back to your own country!’”

“When I’m traveling by myself on the train, I sometimes hear people wondering if I’m a hāfu or a foreigner. I think to myself, ‘Hey, I understand Japanese, you know.’ When I’m at a hot spring resort or somewhere too, people around me talk about me as if they don’t think I know what they’re saying.”

“I often hear people calling out to me ‘Hello, hello,’ from cars when I’m walking along the street. Other passengers stare at me on the train too. My younger sister and I both hate that. . . . I used to especially dislike going out with my dad because people would always look at us. He’d want to come with us though, so when I was small I’d wish he wouldn’t come along.” [Laughs] “After a while, I more or less got used to it . . .”

Among these stories of stereotypes and unfair treatment, the problems of always being treated as a foreigner at work, which may lead to complaints against one, are notable.

Others have experienced racial harassment in which their every move is scrutinized to judge whether it is “foreign” or “Japanese.” Even if no malice is intended, daily repetition in the workplace can lead to severe mental strain. There has been a lot of recent talk about work-life balance and work-style reform, and more companies are drawing up guidelines about sexual harassment and discrimination against people based on their sexual orientation and gender identity. But not enough consideration is given to the needs of employees with mixed roots. Numbers of both foreign workers and mixed-race Japanese employees are on the rise, so guidelines on racial harassment should be an urgent priority.

When it comes to discrimination at the hiring stage, some have been successful in actively talking about their international background in interviews. However, it frequently becomes a barrier to employment, meaning the job market is certainly not a level playing field.

Hāfu with one parent from another East Asian country can often pass as Japanese. They face the dilemma of whether or not to “come out” and risk losing a job to prejudice.

The way hāfu are perceived in everyday life is another cause of strain. They are seen as foreigners and unable to speak Japanese, and it is not unusual for them to be insulted or persistently stared at in their neighborhoods and other areas they regularly spend time in.

There needs to be greater understanding of the postwar lives of hāfu, their various identities, and social situation. Without this, they will continue to be assimilated or excluded, while stereotypes remain.

As I have written previously, gradually more hāfu are telling their own stories to the wider Japanese public. It is important to listen to them to ensure effective communication in an increasingly multicultural Japan.

(Originally published in Japanese on November 14, 2018. Banner photo: The author’s mother’s photograph album shows his grandmother and his mother as a child, opposite a picture of his grandfather taken for army records. Courtesy Shimoji Lawrence Yoshitaka.)