Economy Society Oct 31, 2018
Trading has finally begun at the new Toyosu wholesale market, whose opening was delayed for two years following revelations of contaminated soil and groundwater. Workers appear surprisingly upbeat and intent on building a brand image rivaling that of the celebrated Tsukiji market.

Tsukiji’s 83-year role as the “kitchen of Japan” came to a close as a new wholesale food market opened in Toyosu on October 11, 2018. The launch of the new market in Kōtō, Tokyo, had been delayed for two years after Governor Koike Yuriko announced, upon taking office in 2016, that the move would be postponed due to safety concerns. The first day of operation at Toyosu went relatively smoothly, despite traffic jams outside the market and a small fire involving a motorized shuttle cart.

The governor visited the new market on opening day and addressed officials and workers a little past five in the morning, before the tuna auction began. Referring to the procession of the iconic “turret” carts from old, familiar Tsukiji to spanking-new Toyosu, she noted that the scene was particularly symbolic of the relocation.

“I hope that you’ll apply the skills and expertise you’ve honed at Tsukiji,” Koike said, “to turn Toyosu into Japan’s most important market and to build up its image.” 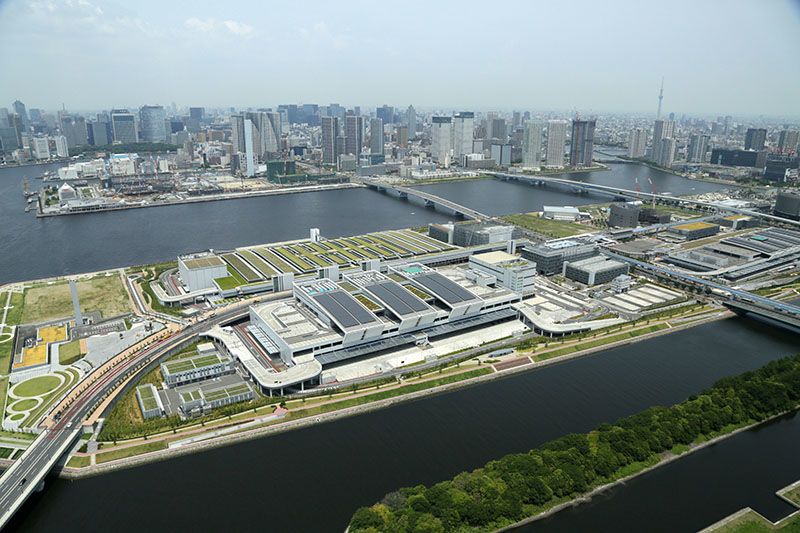 An aerial view of the Toyosu Market in July 2018.

Hundreds of motorized “turret” carts, used to carry goods inside the market, made the move to Toyosu in the early morning hours of October 7, after the Tsukiji market closed on October 6.

Opening day was not completely trouble-free. Shipments into the market were delayed as trucks were stuck in traffic jams outside, mainly because a new road linking central Tokyo directly to the Toyosu market had yet to open to traffic. Lifts between floors also malfunctioned, preventing timely deliveries of fish to their respective auctions.

There were several incidents involving turret carts. A fire truck was mobilized when a cart suddenly caught fire, and another cart collided with a pedestrian, who was taken to hospital.

These incidents notwithstanding, the market handled a high volume of fish on its first day, since there had been no trading for four days following Tsukiji’s closure. There were plenty of fresh tuna, saury, sardines, and horse mackerel on hand, and while bids were generally modest, the purchase of a single bafun-uni sea urchin (400 grams) for ¥200,000 made big waves.

Scenes from the first day of trading at Toyosu.

Toyosu, unlike Tsukiji, is an enclosed facility enabling strict hygienic and temperature control. Tsukiji was housed in open, single-story structures, and fish awaiting trading were often exposed to the elements—sometimes being left in the aisle under direct sunlight. Great care was thus required to ensure freshness, such as during the scorching heat of this past summer.

Toyosu is a multistory facility, which caused initial confusion among some traders. Sharp curves on slopes between floors forced cart drivers to slow down or stop to avoid bumping into one another.

The new market, measuring 400,000 square meters, is 1.7 times larger than Tsukiji. There are three main markets for fisheries (wholesale), fisheries (intermediate wholesale), and fruits and vegetables. The respective markets are housed in separate buildings, and traders must cross the street to move from one section to another.

Wholesalers and intermediate wholesalers bustled about in the pristine, new market, appearing unfazed by the unfamiliar surroundings and infused, rather, with a great sense of expectation. Hardly anyone voiced concern about the contaminated soil and groundwater found at the site, which had caused the two-year relocation delay. 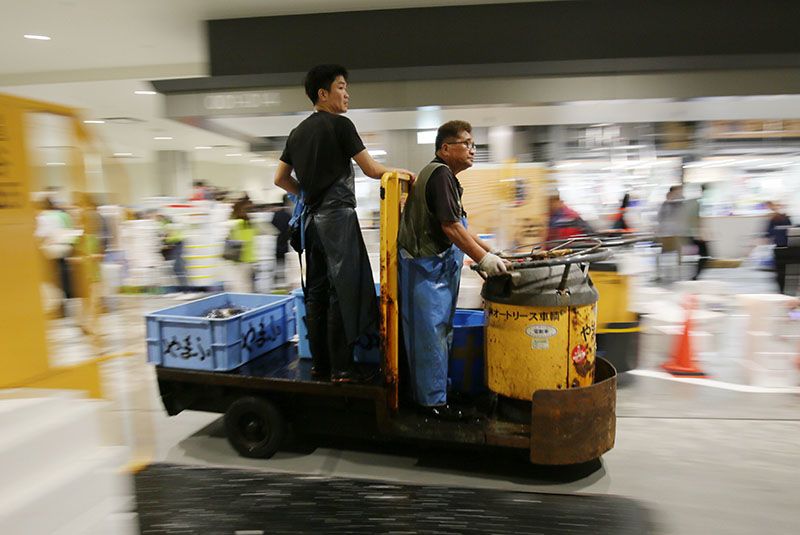 A turret cart speeds along inside the intermediate fisheries market on October 11.

From Despair to Hope

A check of groundwater in January 2017 found levels of toxic benzene far exceeding safety standards, along with cyanide, which is not allowed to be present at any detectable level. The revelation shocked market merchants and exacerbated mistrust toward Toyosu and the Tokyo government. Earlier disclosures had revealed that a layer of clean soil had not been added to ensure safety.

Many became resigned to the possibility that Toyosu would never open. Governor Koike, though, announced plans to go ahead with relocation while preserving Tsukiji’s legacy. Experts monitoring the cleanup operation deemed areas above ground to be safe, paving the way—following additional construction work completed in July 2018—for the governor to issue a safety declaration and for the minister of agriculture, forestry, and fisheries to approve the opening of Toyosu as Japan’s new central wholesale market.

Koike’s declaration was the signal many Toyosu advocates had eagerly been waiting for, but there was nonetheless lingering opposition to the move. Market watchers note that the agriculture minister came under pressure not to grant his approval. But in the face of the government decision, even diehard Tsukiji loyalists were forced to prepare for relocation, or face losing their operating licenses. 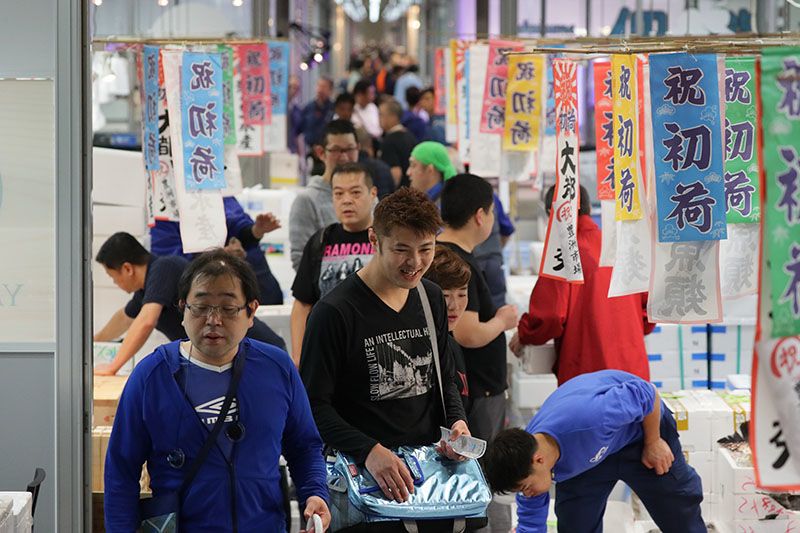 Many intermediate wholesalers placed banners celebrating the start of trading on October 11.

Visitors Flock to Both Toyosu and Tsukiji

Toyosu may not be able to match Tsukiji’s illustrious 83-year history right away, but workers are nonetheless upbeat about the future of the new market. On October 13, the first day that Toyosu was opened to the general public, visitors flocked to the renowned sushi restaurants and other shops that had relocated from Tsukiji. Most of the items served at the shops came from the new market, and visitors seemed delighted with the fresh seafood. There was little concern about contamination, and Toyosu appears headed to become a new, major tourist destination. 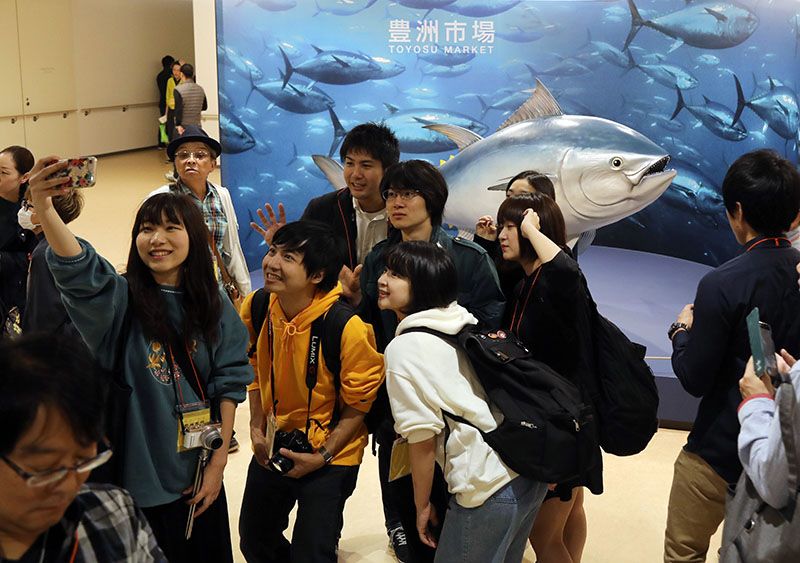 Tourists take photos in front of a tuna replica after Toyosu opened to general visitors on October 13.

The Tokyo metropolitan government has announced that it will continue to monitor the groundwater and air around the market and regularly disclose its findings. Expressing expectations that the local government would take appropriate measures to prevent groundwater leaks in the wake of a major earthquake or heavy rainfall, most market officials believe that the premises are safe.

Some time may be needed before workers become fully accustomed to their large, fresh surroundings, but they appear intent to turn Toyosu into Japan’s new “kitchen” on a par with the famed Tsukiji market.

The former market will be dismantled and transformed into a transport hub for the 2020 Tokyo Olympic and Paralympic Games, while some of the land will become part of a new thoroughfare. The plot will be redeveloped following the Games, potentially as a food theme park, as proposed by Governor Koike, though no concrete plans have yet been drawn up. There is also a need to balance the use of the Tsukiji site with the construction of the new Senkyaku Banrai tourist center inside the Toyosu market.

The Tsukiji “outer market” of some 500 shops, meanwhile, continues to attract visitors, owing to its proximity to the Ginza shopping district. Shop owners hope to develop an even bigger tourist attraction in the years ahead by building on the neighborhood’s fabled charm that Toyosu, they feel, will not be able to match. 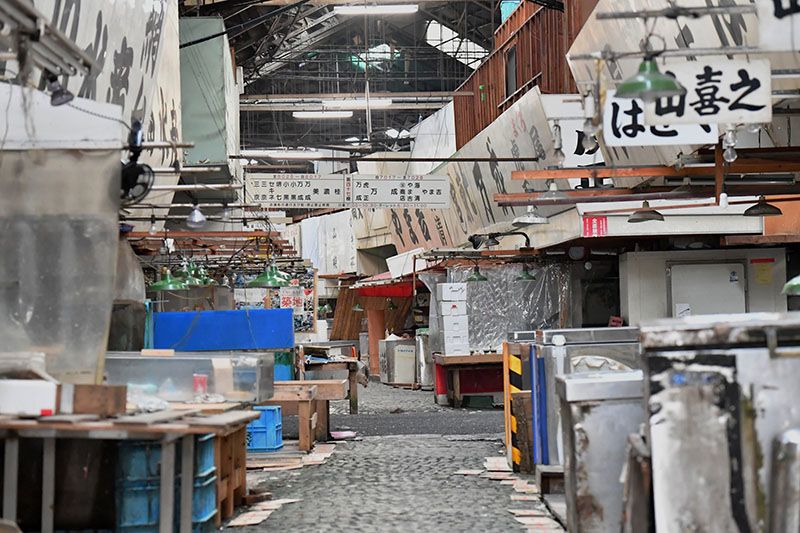 A rat darts across an aisle at Tsukiji’s deserted intermediate wholesale market on October 11. 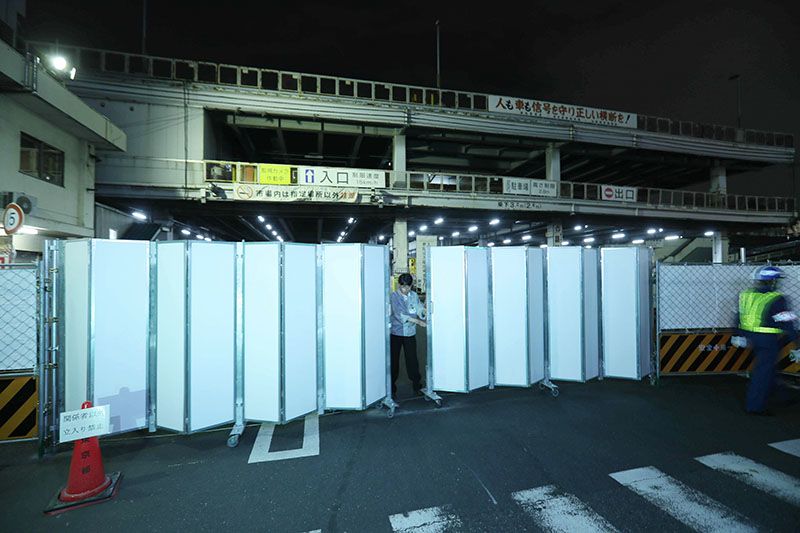 The main gate at Tsukiji is now closed to visitors following relocation (October 17). 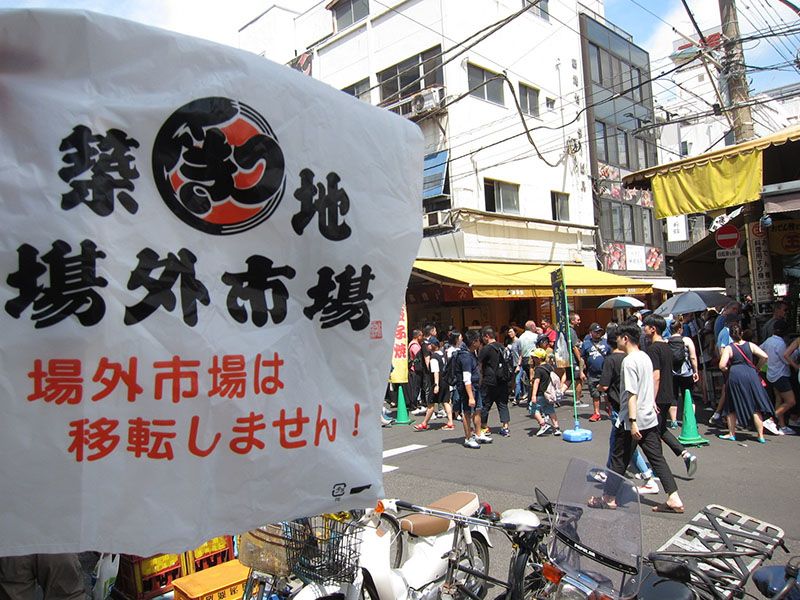 Tsukiji’s “outer market” of shops and restaurants remains a popular destination for tourists.