Science Technology Society Lifestyle Jan 4, 2013
A new page is about to turn in the age-old history of sericulture. Cuting-edge research using transgenic silkworms is making it possible to create new types of silk and pharmaceutical products. The National Institute of Agrobiological Sciences in Tsukuba, Ibaraki Prefecture, is one of the leading centers of this new research. 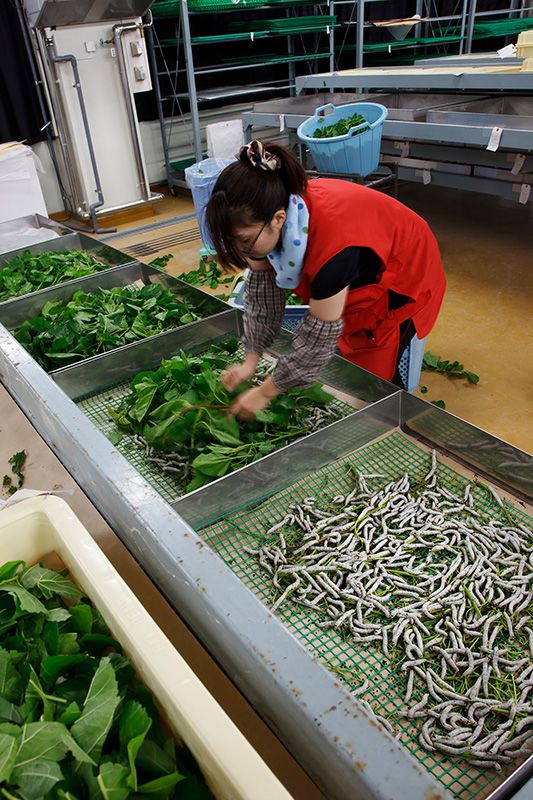 The NIAS breeds many varieties of silkworms. This both benefits research and contributes to the preservation of the species.

Established in 2001, the National Institute of Agrobiological Sciences is one of Japan’s core biotechnology institutions. In a major ongoing NIAS project, scientists are working to harness silkworms’ remarkable ability to produce proteins by inducing them to make proteins other than those they naturally make. Cosmetics that use proteins from transgenic silkworms are already on the market, and now attention is turning to the potential for using silkworms to make safe and affordable pharmaceutical products.

Sericulture—the cultivation of silkworms for their silk—originated in China around the fifteenth century BC, and arrived in Japan by around the second century. At the turn of the twentieth century, Japan was the world’s leading producer of silk, but the use of synthetic fibers and increasing industrialization made it difficult for Japan’s small producers to compete. Today, China, India, and Thailand are the main producers.

Some 600 varieties of silkworm exist in Japan, including genetically modified species. One characteristic common to all silkworms is that unlike other insects they never develop the ability to fly, even after the larvae emerge from their cocoons as adults.

Silkworms suited to sericulture have been selectively bred, or “domesticated,” over many thousands of generations. This has turned out to be a major advantage in the effort to make transgenic silkworms commercially viable. Like all genetically modified organisms, transgenic silkworms are subject to strict controls and restrictions under the Cartagena Protocol.(*1) The fact that silkworms cannot fly makes it much easier to ensure that none of the transgenic varieties can escape into the wild and mix with the natural population. 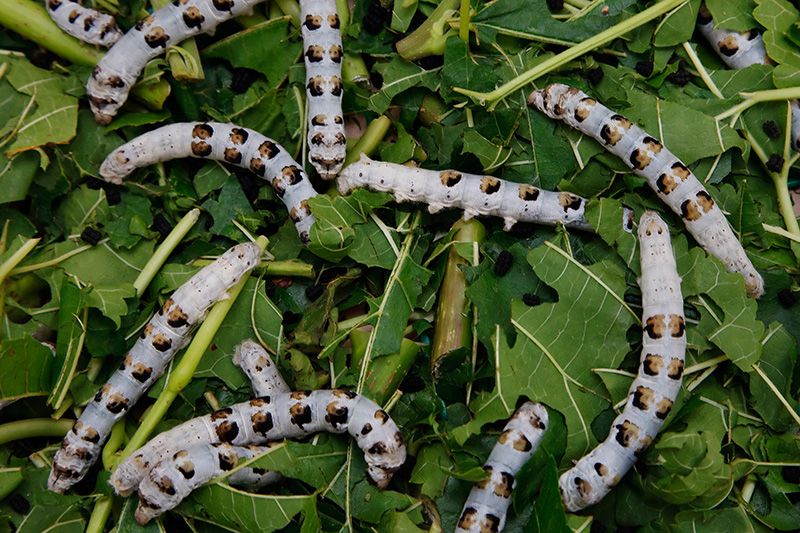 Silkworms lay 300–400 eggs at a single time. Immediately after hatching they are the size of small pieces of thread, but after molting four times their body weight is some 10,000 times greater.

Silk thread is made up of a mixture of these two proteins: about 25% sericin and 75% fibroin. The sticky sericin is soluble in water, so that boiling the cocoons in water allows the fiber-like fibroin alone to be removed as silk thread. 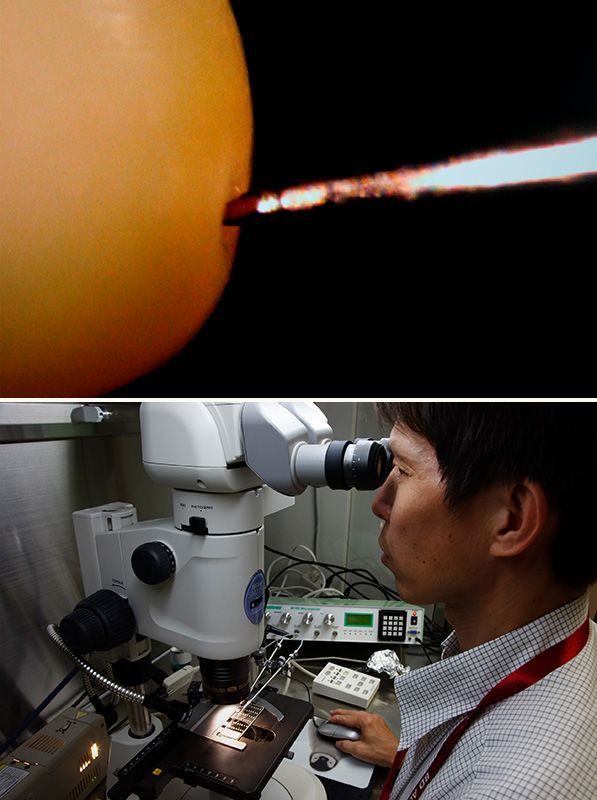 Silkworm eggs are about 1 mm in diameter. Great skill is required to inject DNA into the portion of the egg that will differentiate into germ cells (top). Chief researcher Uchino Keirō introducing DNA into an egg using a microscope (bottom).

In the center’s work on genetically modified silkworms, two strands of DNA are injected into silkworm eggs to create the transgenic silkworms. The first of these is vector DNA.(*2) This contains foreign genes that make specific proteins called transposons, which can change their position from one part of the genome to another. The other is helper DNA. This contains enzymes to promote transfer. These are injected into eggs and the eggs are allowed to hatch normally. The next generation population is then screened and usable recombinant silkworms selected.

“When we inject the DNA, we are targeting the part of the egg that differentiates into germ cells,” says chief researcher Uchino Keirō. “This allows specific properties to be passed on to subsequent generations. It is this technology that has made the mass production of genetically modified silkworms possible.” 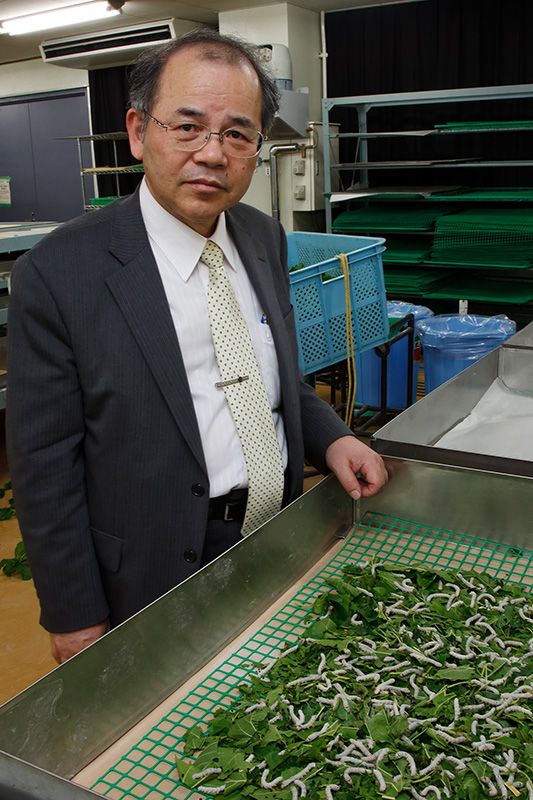 When the middle section of the silk gland is expressed (the area where the sticky sericin is created), proteins are produced that target the inner structure of the sticky paste. Since sericin dissolves in water, the proteins produced in this way are very easy to extract. “We have developed varieties in which more than 98% of the protein produced is sericin,” says Dr. Machii Hiroaki, director of the Genetically Modified Organism Research Center. “By combining these varieties with others, a greater number of proteins can be obtained.”

NIAS is collaborating with the Gunma Sericultural Technology Center, a Maebashi agricultural cooperative for transgenic silkworms, and a number of private-sector companies. Dr. Machii says he is optimistic for the future: “Times are tough for sericulture in Japan right now, but there is real hope that genetically modified silkworms will help to get the industry back on its feet.”

From Cosmetics to Drug Treatments

In Fujioka, Gunma Prefecture, the Immuno-Biological Laboratories Company has successfully created a genetically modified silkworm that produces human collagen(*3) with technical assistance from NIAS. This collagen is already being used in commercial cosmetic products.

Natural sources of collagen have previously been difficult to extract. With this new technology, roughly 10 mg of collagen can be produced from one cocoon. To extract this small amount the cocoons are dissolved in water and the fiber filtered out. However, problems remain. The sticky sericin tends to get caught in the filter mesh, making the process difficult to control. Tomita Masahiro, manager of the protein engineering department at Immuno-Biological Laboratories, finally devised a method that allows him to collect 6–7 mg of collagen from every 10 mg produced.

Immuno-Biological Laboratories is already using human collagen in cosmetics and other products. Most conventional cosmetics use fish-derived collagen, but this provokes an allergic reaction in some people. Using human collagen solves this problem. Another thing in the products’ favor is the image boost they are likely to get from of the association with silk and cocoons. 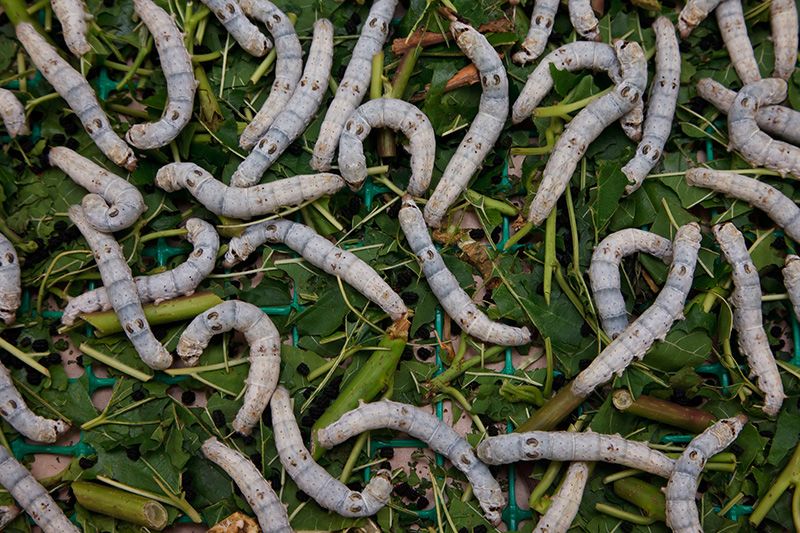 “Looking forward, we want to build up a line of pharmaceutical products and over-the-counter treatments. For example, many diagnostic agents use antibodies that are produced in cell cultures or mice. From an animal welfare perspective, it would nice to be less dependent on mice. Using cell cultures also is not ideal, either—the costs involved mean that the final product is more expensive. All these problems would be resolved if we could make antibodies from transgenic silkworms instead. After all, antibodies are a type of protein. In the future we hope that it will be possible to make safe and affordable pharmaceutical products in this way,” Dr. Tomita says.

For thousands of years, people have treasured the beauty and texture of silk. Proteins made by transgenic silkworms may soon produce safe and inexpensive drugs that help us to stay healthy. Humans may soon have another reason to feel grateful to silkworms.

(*1) ^ The associated Japanese law, the Act on the Conservation and Sustainable Use of Biological Diversity through Regulations on the Use of Living Modified Organisms, was enacted in February 2004 to control the impact of genetically modified organisms on plants and animals in the wild.

(*2) ^ Nucleic acid (DNA) used to introduce foreign genes into the cells of silkworms. “Vector” is derived from the Latin word meaning “vehicle” or “carrier.”

(*3) ^ Collagen is a protein component of tissues such as skin and cartilage. There are thought to be dozens of types of human collagen alone. Industrial use collagen is normally extracted from cattle, pigs, fish, and other species.