Science Technology Society Lifestyle Apr 25, 2013
Fujifilm has launched a new line of cosmetics developed using the company’s film-related technologies. Cosmetics and film may seem like unrelated industries, but Fujifilm found a way to tap into a surprising synergy between them.

In 2006, the global manufacturer of cameras and film Fujifilm entered the cosmetics field, in the following year launching its Astalift series of skin-care products. Since then the company has extended its product lineup beyond the skin-care series to also include base makeup. Astalift continues to grow as a global brand, sold in China, Southeast Asia, and European countries as well as in Fujifilm's home market of Japan.

It may seem odd for a film company to sell cosmetics, but as the background to the development of Astalift shows, this was an ideal business match. 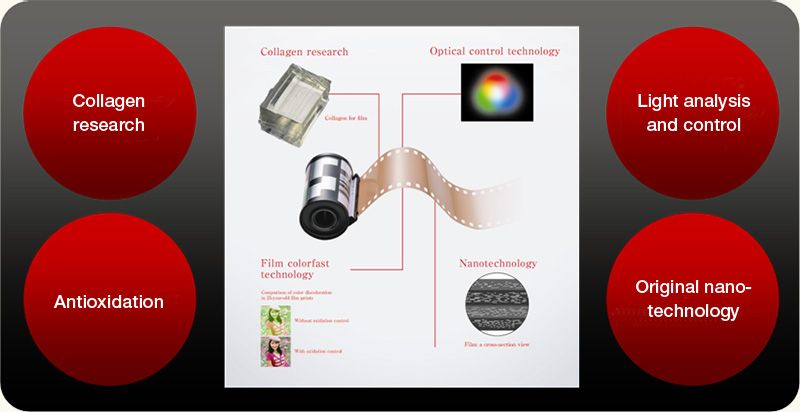 The first key linking Fujifilm and cosmetics is antioxidant power. The company has conducted extensive research on technologies to prevent oxidation by ultraviolet rays, a cause of color fading, in order to preserve vivid colors in printed photographs. In this effort, the company focused on the natural antioxidant astaxanthin, which is now a key ingredient of Astalift products.

This antioxidant can be used for both film and skincare because the same oxidation from ultraviolet rays that causes color photographs to fade also leads to the aging of a person’s skin. Ultraviolet rays increase melanin in the skin, producing spots, and cleave the fibrous proteins collagen and elastin that serve to maintain skin tautness, thereby causing wrinkles and sagging.

There were challenges in using astaxanthin in skincare products, however. The substance is fat soluble and does not readily dissolve in water, making stable formulation in cosmetics difficult. The key to overcoming this was once again found in film technology. In manufacturing photographic film, more than 100 types of fine functional particles, such as those that sense light and produce color, are emulsified and dispersed on ultrathin collagen membranes about 20 micrometers thick. These membranes are then layered about 20 times. This nano-level emulsification and dispersion technology made it possible to stabilize the astaxanthin in cosmetics products, at the same time greatly enhancing its ability to penetrate the skin. Moreover, collagen, which accounts for about half of the materials in film, is also a main component of skin. Fujifilm used its long experience dealing with collagen to determine the best collagen for skin moisture and tautness. 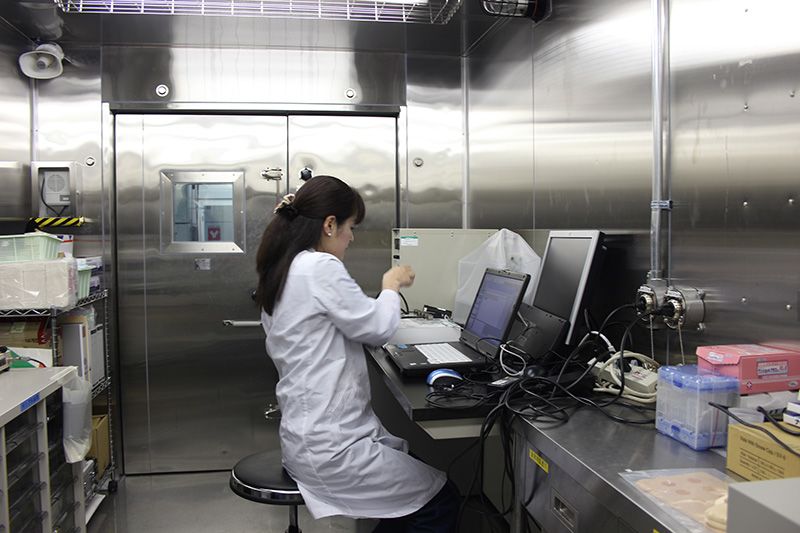 Room used to measuring the condition of skin under a constant environment of 22°C and 50% humidity. Skin moisture content, elasticity, and oil content are measured after a person spends about 20 minutes in this room.

Nakamura Yoshisada, the senior research manager in Fujifilm's Pharmaceutical & Healthcare Research Laboratories, has led the development of Astalift. He was involved in film-related development for most of his career at Fujifilm, leaving him at a loss initially when he was assigned to work on cosmetics. In the end, though, he was able to draw on his previous research for the new job.

“People tend to think that photographic film faithfully reproduces what the eye sees, but in fact ‘memory color’ is more vivid and beautiful, thus that is what we seek in photographs,” Nakamura explains. “Many consumers are particularly sensitive about skin brightness and translucency in photographs. We control the coloring in photographic film so that the reproduction is a bit brighter than the actual skin color. We spent many years pursuing beautiful skin in our film imaging business, and our accumulated technologies and perspective came in handy in our cosmetics efforts, too.”

Photographic film and digital cameras capture light and express it as color. The company found a way to apply its cutting-edge light-analysis and control technology to its cosmetics work, too. Skin looks quite different under artificial lighting than it does in natural outdoor light, presenting cosmetics researchers with a tall challenge when it comes to producing a consistent look on the face. Fujifilm focused on optical analysis of skin condition and control of light absorption and reflection in its creation of a foundation to make the skin look beautiful under any conditions. 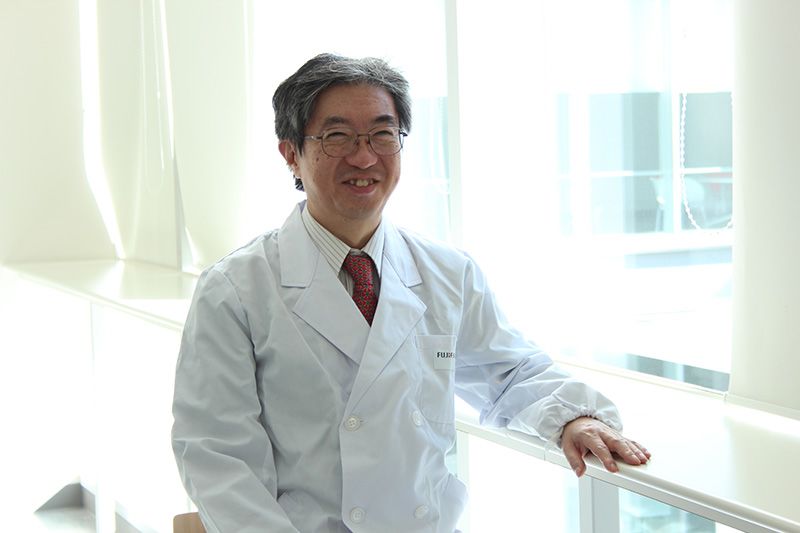 Nakamura Yoshisada, in charge of developing Astalift, says that he uses all of the products himself to evaluate them.

For concealers, which are used to cover spots and dull areas, the traditional approach has been to layer colors on the skin to achieve the desired results. Fujifilm looked instead to light-spectrum analysis to control the absorption and reflection of the yellow light that is peculiar to skin blemishes. The company also strove to create “linking colors” that make the differences in color tone between spots and the surrounding skin less noticeable. By approaching the concealer's task from this different angle, Fujifilm managed to come up with a product line requiring a far smaller range of color variations to match skin color. The simplicity of the lineup may be another factor contributing to its popularity among users.

Optical analysis of “unclear” skin that lacks translucency pointed to tiny disturbances in the epidermal layer, so small that they cannot be seen, as the culprit. These disturbances prevent light from reflecting from the skin brightly and uniformly. Transparent skin, in contrast, was found to reflect more light back and to also be uniform, so that the skin literally shines. The company built on this analysis to launch its Lunamer series of products to treat the skin’s epidermal layer in July 2012.

Fujifilm has long been a household name in the photography industry. However, the rise of digital cameras brought about drastic declines in demand for film. While the company strove to respond nimbly to this shift—indeed, it was the developer of the world’s first digital camera in 1988—it was clear that maintaining its focus on photography alone was not a viable way forward. This led Fujifilm to expand into new fields, including Astalift and other cosmetics, functional foods and supplements, and pharmaceuticals. At the same time, the company has continued to develop its X-ray films and medical devices, which have been a part of its product portfolio from the outset. 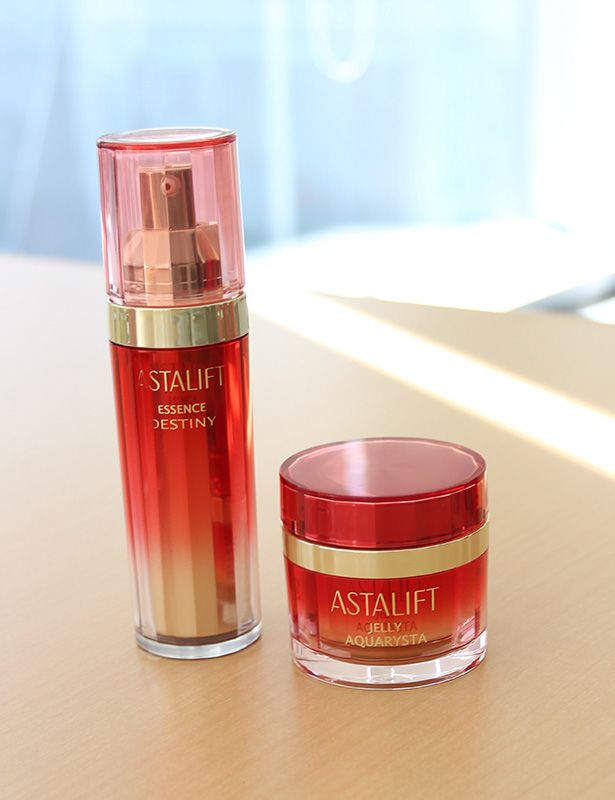 The company was called Fuji Photo Film until 2006, when it adopted the current name, Fujifilm. This new starting point, a “second founding” for the firm, was the launch pad for expansion into a range of new fields on the basis of its technologies cultivated over the years. In April that year the company established the Fujifilm Advanced Research Laboratories as the center to bring together its technologies and seek synergies among them. This was where Astalift was born.

“Fujifilm has a history of pioneering challenging, uncharted fields, as we have done in our cosmetics development,” Nakamura notes. He is confident that the company's store of photographic film expertise will continue to provide hints as it explores new areas. He sums up the Fujifilm approach with a phrase that drives its thinking in the face of sweeping changes to the industry landscape: “Businesses have life-spans, technology does not.”