Ramadan in Japan: A Day in the Life of a Muslim Businessman

Society Culture Lifestyle Aug 4, 2016
Ramadan this year fell during the summer, when the days are longest. For Muslims in Japan, this meant fasting for more than 16 hours a day, a special challenge in Japan's corporate culture. In this close-up of a day in the life of a Muslim businessman, we see how he and his employer are meeting such challenges. 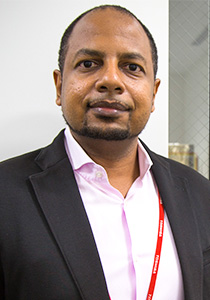 Deputy Manager, Global Sales Group 1, Thermal Power Global Sales Department 1, Thermal & Hydro Power Systems & Services Division, Toshiba Corp.. Born in Saudi Arabia in 1982 to a Sudanese father and an Egyptian mother. Lived in Sudan as a junior high school student, then attended high school in Egypt. In 2003, graduated with honors from Cairo University, where he majored in Japanese studies. Came to Japan the following year on scholarship from Japan’s Ministry of Education, Culture, Sports, Science, and Technology, and earned his master’s degree from Hirosaki University Graduate School of Humanities and Social Sciences. In 2008, joined Toshiba Corp., where he was assigned to overseas sales of thermal and geothermal power-generating equipment with a focus on Southeast Asia. Became a Japanese citizen in 2012.

Abushiba Bakuru is a naturalized Japanese citizen of Egyptian and Sudanese parentage. He has been living in Japan since 2004, when he arrived as a student on a scholarship from the Ministry of Education, Culture, Sports, Science, and Technology. In 2008, after completing his master’s course, Abushiba took a job at Toshiba Corp., where he has put his skills to use in the company's international power and energy solutions business.

Abushiba's first Ramadan in Japan was spent as a student in the city of Hirosaki in Aomori Prefecture. With no other Muslims living nearby, there was no one with whom to fast or to share the evening meal, called iftar, at which Muslims break their fast after sunset. The Ramadan season is much happier for him now that he lives in Tokyo with his Sudanese wife, who passed her second Ramadan in Japan this year.

A Typical Day of Fasting

During the month of Ramadan, Abushiba's day starts at around 2:00 am. He eats the suhur morning meal, his last taste of food and drink until sunset. He then performs a fajr prayer and goes back to sleep for a few more hours before rising in time for his 40-minute commute on a crowded rush-hour train.

In Islamic countries, it is customary to shorten work and school hours during Ramadan so that people can return home early. In Japan, Abushiba is fortunate that he can adjust his hours to some degree, making use of Toshiba's flextime system. 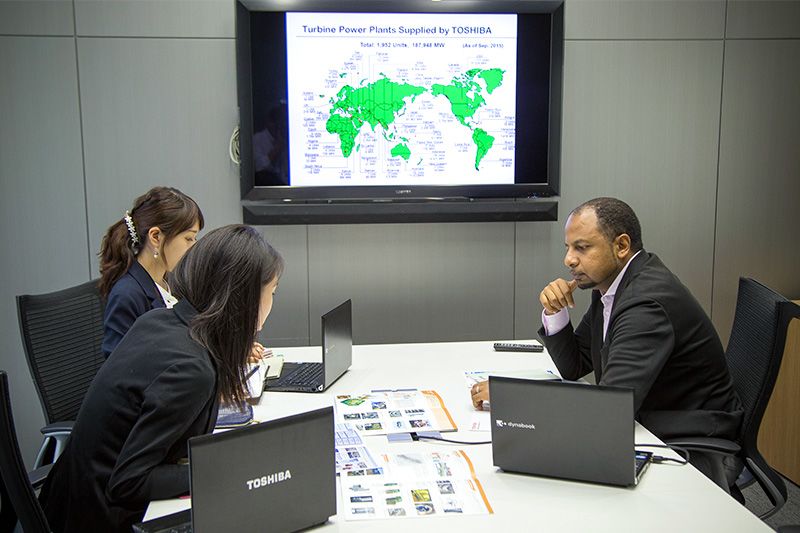 Abushiba consults with his Toshiba colleagues.

Ramadan or no Ramadan, Abushiba performs his assigned duties conscientiously. That includes participating in meetings inside and outside the company, attending conferences, drafting reports, and teleconferencing with clients in the Southeast Asia region, as well as the occasional business trip. He tries to avoid overtime during Ramadan, but if a conference runs late and he is unable to make it home in time for iftar, he will sometimes take a drink of water or juice or snack on some dates to ease his hunger. If he has to take a business trip during Ramadan, Islamic custom permits him to skip fasting on the days he is in transit. But those days must be observed at some point before the next Ramadan, and once he has arrived at his destination he must resume fasting according to local time.

Understanding from His Company and Colleagues

“When I first started at Toshiba,” Abushiba recalls, “I was really surprised when someone told me, 'We're getting a prayer room ready for you, so please be patient.'" He was rather dubious at first, but it was not long before his employers had set up a proper prayer room at Toshiba’s Tokyo headquarters in Hamamatsuchō.

Abushiba’s supervisor and group leader, Nagaie Ryūji, explains. “Toshiba aims to expand its global workforce, and from that standpoint, we thought it appropriate to set up a prayer room to accommodate our Muslim employees.” A prayer room is also provided at Toshiba’s Smart Community Center in Kawasaki, where Abushiba currently works. Although halal meals are not available in the company cafeteria, the ingredients of dishes are displayed with easy-to-understand illustrations, so that employees with dietary restrictions can choose appropriately. Among Abushiba's colleagues at Toshiba are Muslim employees from Indonesia, Malaysia, and other Southeast Asian countries. 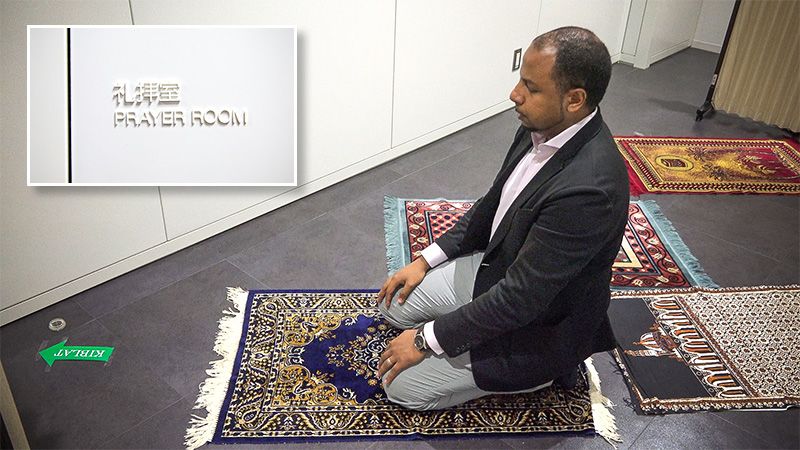 The prayer room at Toshiba’s Smart Community Center in Kawasaki, including the qibla indicating the direction one should face when praying.

The understanding and cooperation of coworkers at Toshiba has been a big plus for Abushiba. Most of his Japanese colleagues in his department, which regularly does business with Muslim clients, know something about Ramadan. They express their interest with such questions as, “When does Ramadan start this year?” “How many hours do you fast?” “Isn’t it hard for you?” With a laugh, Abushiba observes that “none of them so far has offered to fast with me.” 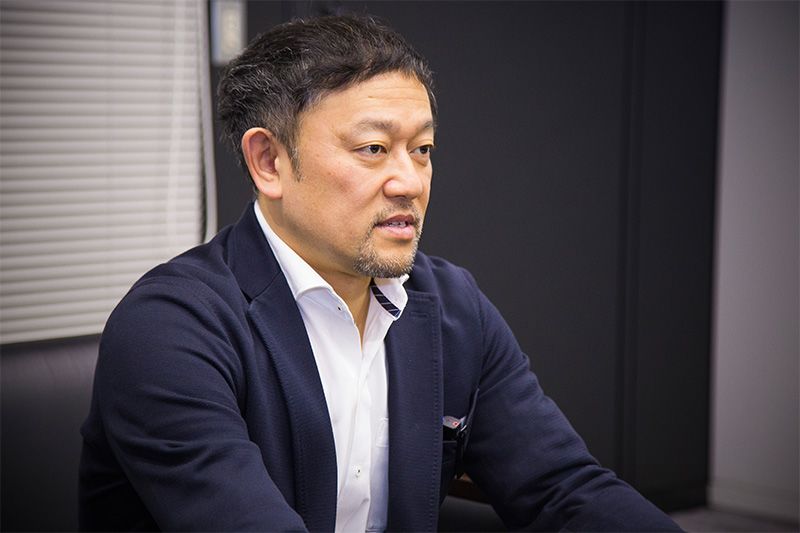 Nagaie Ryūji, Abushiba's supervisor, lived in the United Arab Emerites for eight years and observed Ramadan while he was there. During Ramadan, Nagaie reminds employees working around Abushiba to avoid eating and drinking at their desks, since Abushiba remains in the office, keeping his fast, during lunch break. While there is no explicit rule exempting him from overtime during Ramadan, there is an understanding among his supervisors and colleagues that he is permitted to leave work early enough to get home in time for iftar.

Enjoying the Month of Ramadan

Abushiba leaves the office at 5:30 pm, a bit earlier than his coworkers. He stops to buy some fresh mint for tea, then arrives home about a half hour before sunset. His wife Hadeel, who is still busy in the kitchen, has already laid out a sumptuous iftar meal on the table. While Abushiba changes from his business suit into a traditional white robe, she heats up the soup, pours some juice, and makes last-minute preparations.

At 7:00 pm, Abushiba’s smartphone sounds the azan, the call to prayer, for the maghrib prayer performed just after sunset. Here in Japan, Abushiba relies on a special app to notify him when it is time to pray—unlike in his native country, where the azan call can be heard everywhere. 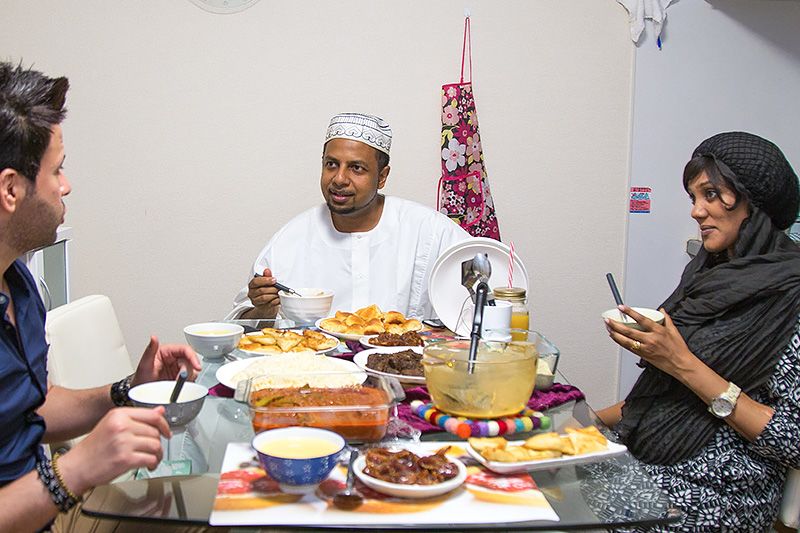 To break the 16-hour fast gently, he begins with a sip of orange juice to quench his thirst, then a bite of a date. Hadeel worries that the food might be too salty, since she was not able to taste it while she was cooking. She waits for Abushiba to take the first bite and smiles brightly when he declares it “perfect.”

“I observed Ramadan four times while I was studying at Hirosaki University in Aomori Prefecture,” Abushiba recalls, “and it was a very lonely experience. No one around me understood about fasting, and I had to eat iftar all alone each evening.”

He also had to adjust to the local Tsugaru dialect, which was completely different from the standard Japanese he had studied. But he has many happy memories as well, including his first encounter with snow and the fun he had snowboarding. In Tokyo, where he moved after being hired by Toshiba, he met many compatriots and was finally able to enjoy iftar with friends. Now that he is married and part of “a warm and cozy household," he never feels lonely observing Ramadan in his adopted country. 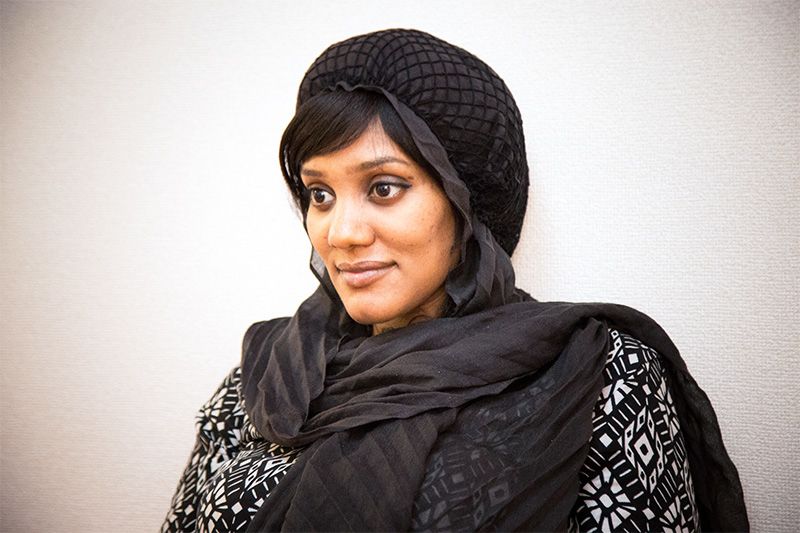 Hadeel says that Ramadan is a happy time for her because “Abushiba comes home from work earlier than usual.” From the standpoint of Sudanese culture, which puts family before work, Abushiba's “workaholic ways” have required an adjustment on her part. Last year’s Ramadan was a lonely month. She spent most of her time shopping by herself, hindered by a limited knowledge of Japanese, cooking, and sitting at home waiting for her husband to come home. Since then, though, she has made many Japanese friends. These days she attends a Japanese language school and is busy studying Japanese. She and her husband also take part in communal iftar meals held for married Sudanese couples in Tokyo. At other times they invite friends to their home for meals.

Having said all that, Hadeel still finds it difficult to observe Ramadan customs while in Japan. For example, in Sudan her mother visits the neighborhood mosque after iftar and take part in voluntary talaweeh prayers from evening to dawn. In Japan, Hadeel usually performs these prayers at home, since there is no mosque close enough to visit on a daily basis.

Named Abu Bakr at birth, Abushiba assumed his current surname when he became a Japanese citizen in 2012. The name incorporates the kanji for shiba, a reference both to the Tokyo neighborhood where he was and to his employer, Toshiba. He says that he reached the decision to change his citizenship when he realized that he wanted to continue at Toshiba and remain in Japan indefinitely. That realization arose from his experience working at Toshiba. 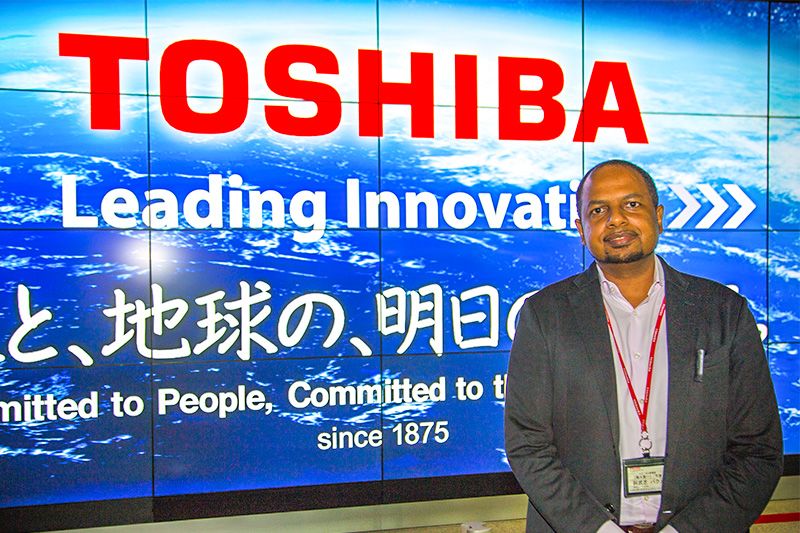 Abushiba at the entrance of Toshiba’s Smart Community Center.

Nagaie describes Abushiba's Japanese language proficiency as “better than the average Japanese." But Abushiba still wants to cultivate a better understanding of Japanese thinking and behavior. “In Japan, you put forth your own opinions and ideas, while respecting those of others, and then work to reach a consensus about what's best for the team,” Abushiba explains. “At the same time, I've had to learn to do things on my own without relying on others.”

Under Toshiba’s human-resource development policy, which aims to give employees wide-ranging experience, Abushiba has been handling business related to Southeast Asia, where no Arabic is spoken. In the years ahead, he hopes to get more involved with Middle East operations. “If possible, I’d like to be responsible for one of our Middle East bases, so that I can promote a better understanding of how to reconcile Japanese work styles with the culture and religion of the Middle East. I’d like to play a coordinating role in that respect.”

People like Abushiba, equipped with a deep understanding of Japanese society, have an important role to play in facilitating business and exchange between Japan and Muslim countries. And with the global Muslim population at 1.6 billion and growing, this role is more vital than ever before. (Originally written in Japanese by Katō Megumi and Muhamed Hassan of Nippon.com. Photographs and video by Ōtani Kiyohide of Nippon.com.)