Building Bridges Between Japan and China

Economy Society Culture Jan 20, 2016
Luo Yiwen is the Chinese-born president of Tokyo-based tax-free electronics retailer Laox, which has been one major beneficiary of the Chinese shopping sprees known as bakugai or “explosive buying.” His policies aimed at customers from China and other foreign countries have paid off in a big way. 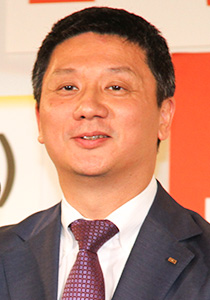 Born in Shanghai in April 1963, Luo Yiwen is the president of the Tokyo-based retailer Laox Co., Ltd. He worked at a department store in China after graduating from the Shanghai University of Finance and Economics in 1985 and moved to Japan in 1989. Luo earned a master’s degree in economics from Yokohama National University in 1996. While pursuing his postgraduate studies, he opened a bookstore and launched a Chinese-language newspaper in Tokyo. In 2006 Luo established the forerunner of the company that would acquire a majority equity interest in Laox in 2009; after the acquisition he became the latter’s CEO.

The co-winners of the 2015 installment of a popular and eagerly awaited ranking of the year’s most notable new buzzwords and phrases in Japanese were bakugai (explosive buying) and toripuru surī (triple three). The publishing house Jiyū Kokumin Sha, which conducts the annual year-end ranking, announced the winners at a ceremony on December 1. Jiyū Kokumin Sha convenes a panel of prominent figures—seven in 2015—from academia, entertainment, publishing, and other fields to make the selections.

“Triple three” refers to the baseball feat of achieving a batting average of higher than .300, at least 30 home runs, and 30 or more stolen bases. Two players achieved this feat in the past season—the first time that anyone had done so in 13 years. The phrase resounded throughout the baseball season as Japanese fans followed the exploits of the two players.

“Chinese are the most numerous by far among Japan’s growing numbers of tourists from abroad,” the organizers noted. “The Chinese visitors spend more than ¥170,000 each in explosive purchasing . . . at drugstores, electronics emporiums, supermarkets, and department stores. Their incomparable spending was a top story [of 2015] in Japan. Elsewhere around the world, a Chinese company took the extravagant step of flying 6,400 employees to France for six days of sightseeing and shopping, and the Chinese leader Xi Jinping acquired 300 passenger airliners from the United States in a frenzy of explosive buying.”

On receiving the award, Luo commented, “Explosive buying is essentially a reflection of the quality of Japanese goods. I am determined to offer ever-better products to people around the world and thereby make the most of this bakugai whirlwind.”

The modesty evinced in the acceptance remarks was consistent with Luo’s self-effacing demeanor. Unfailingly attentive to others, Luo has been a model of unassuming diligence ever since arriving in Japan in 1989. This stance underlies the excellent relations that he has built with the Japanese employees at Laox. His arms-in-the-air gesture of triumph in response to the applause at the awards ceremony was out of character and endearingly awkward. 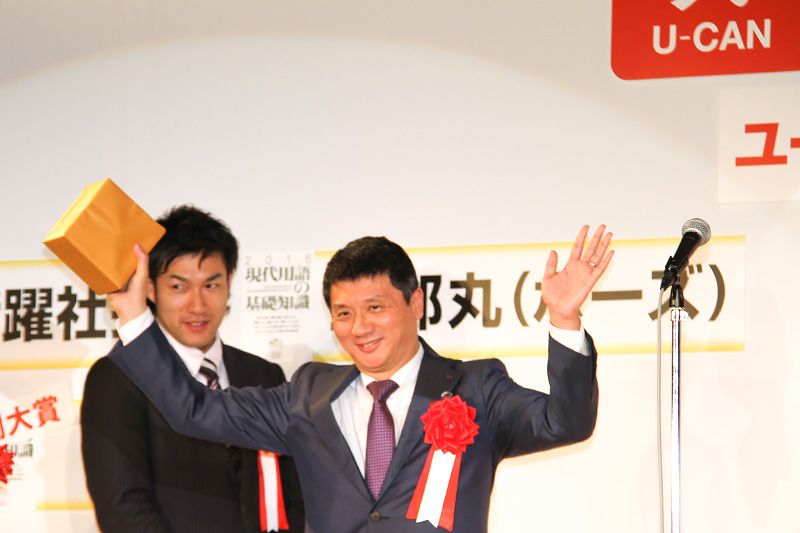 Arms raised in joy, Luo celebrates the recognition for bakugai.

Luo helped mediate the 2009 acquisition of Laox by China’s Suning Commerce Group. He thereupon acquired an equity stake in Laox and took over the helm as president. In revitalizing the company, his management team has done more than simply make the most of an explosive tailwind.

Luo realized from the start that reviving Laox would be a huge challenge. The company had become available for acquisition because its business and financial performance had deteriorated severely. Luo and his colleagues promoted tax-free sales and employed other stratagems to rekindle business. But no sooner had their efforts begun to yield results than the Great East Japan Earthquake struck in March 2011, blindsiding the Japanese economy. Laox’s business suffered even more from a territorial dispute that erupted between China and Japan in 2012. The dispute arose from conflicting claims to the Senkaku Islands (known as the Diaoyu Islands in China), and it led to a sharp decline in the flow of Chinese tourists to Japan.

As the Sino-Japanese diplomatic friction abated, and as the weak-yen policy of the government led by Prime Minister Abe Shinzō made Japan more affordable, Chinese tourists started thronging the streets of Tokyo and other cities once again. Laox’s net sales climbed 44% to ¥33.2 billion in 2013 and 51% to ¥50.2 billion in 2014, when the company returned to the black for the first time in 14 years.

In Tokyo and Osaka, Luo has positioned large Laox stores along shopping routes favored by Chinese tourists. He has also opened stores in regional cities that attract Chinese visitors, and his strategy includes negotiating deals in which travel companies embed his stores in their tour itineraries.

Tokyo’s Shinjuku district is the scene of intense competition among Japan’s large electronics retailers. A huge, state-of-the-art emporium opened there by Luo in June is Laox’s twenty-third store overall, and it demonstrates a new phase in the company’s marketing approach. At the new Shinjuku Laox, Luo seeks to earn a “Japan premium” by encouraging shoppers to rediscover traditional Japanese values. The décor and goods on display emphasize Japanese aesthetics over price-oriented merchandising.

The abandonment of low-price retailing at the new Laox in Shinjuku is symbolized by the jewelry department, where a ¥300 million diamond is on display. Even the “more affordable” items include numerous pieces priced in the millions of yen. The fastidious attention to service throughout the store includes a multilingual sales staff and a prayer corner for Islamic customers.

Merchandising attention to Chinese customers is evident at the new Shinjuku store in such products as red and gold induction rice cookers, and Laox’s original Origami line of fashion apparel reveals a new facet of Luo’s marketing aspirations. An article in the Asahi Shimbun newspaper raved, “[Laox] is competing on the basis of things besides price.”

Industry observers are nearly unanimous in acknowledging that Laox is a step ahead of its competitors in regard to marketing strategy. “They’ve adopted a really global approach, “ explained one.”

Laox released its interim (January–June) fiscal results in August, dismissing concerns about the possible impact of the downturn in Chinese equity prices on the bakugai phenomenon. Luo declared, “We expect that the adverse effect will be minimal and that Chinese tourism in Japan will continue to grow.”

At the awards ceremony Luo remarked, “I gratefully accept this recognition for the bakugai buzzword, but I’m well aware that this might be just a passing social phenomenon. I am focused on sharing the appeal of Japanese products with people worldwide.”