Economy Society Lifestyle Aug 5, 2015
Ramen is increasingly popular with diners around the world. And a growing number of Japanese purveyors of the noodle cuisine are setting up shop overseas. Nippon.com examines the experience of two Japanese companies: a large, well-established chain that is building a market presence in Europe, North America, and Oceania and an upstart venture business that is focusing on Southeast Asian markets.

Dosanko is a Japanese ramen giant now stepping out into Europe, North America, and Oceania. The company operates through some 300 company-owned outlets and franchises, mainly under the Dosanko Larmen name.

It opened a Paris shop in October 2014, followed closely by shop openings in Los Angeles and Melbourne. And the company has announced plans to open at least 50 overseas shops within five years.

Management at Dosanko declares forthrightly that the company’s future resides outside Japan in regard to sales growth. Dosanko’s website equates “growth strategy” with “overseas expansion” and characterizes the company’s domestic operations as merely a “symbolic” presence. 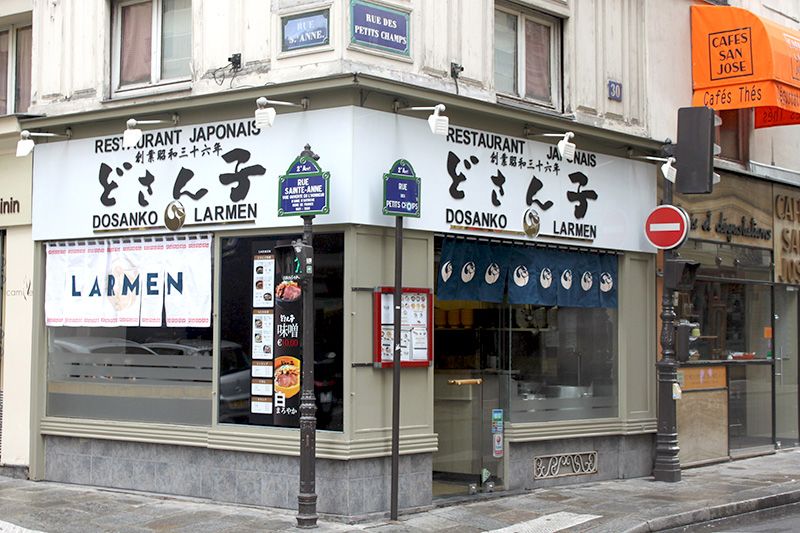 “Japan’s ramen market is saturated,” explains Dosanko spokesman Ina Shintarō. “Overseas business offers far more potential for earning sound returns on investment. For example, expenditures per customer are twice as high at our Paris shop as at our average shop in Japan. And the shop’s daily turnover is four times higher than the average turnover at our Japanese shops.

“Our Paris shop competes with nearby Japanese eateries run by ethnic Chinese and Koreans. But those places don’t compare in regard to quality. Offer good food, and customers will beat a path to your door.”

Ina observes that growing numbers of Westerners regard Japanese culture as “cool” and he suggests that his company’s ramen business will benefit from that association.

On the Heels of Sushi

The Dosanko story begins with the 1961 establishment of a ramen shop in Tokyo. That shop proved popular, and its owner embarked on expansion through franchising and investment. Dosanko’s network ballooned to some 1,200 franchisees and company-owned shops over the next two decades, including 11 shops in the United States.

A lot of Dosanko’s franchise shops closed in the 1990s when the first-generation owners retired. And the company’s brand image suffered as headquarters struggled to enforce quality standards across the extensive franchise network. Fiscal reversals ultimately forced a sweeping retrenchment, which included a drastic downsizing of Dosanko’s domestic network and a withdrawal from the US market.

“We began opening US shops in the 1970s,” recounts Dosanko’s Ina. “In retrospect, we were getting ahead of ourselves. Our American cooks didn’t understand the essential appeal of ramen. And Japanese expatriates told us that our ramen was ‘disappointing.’” 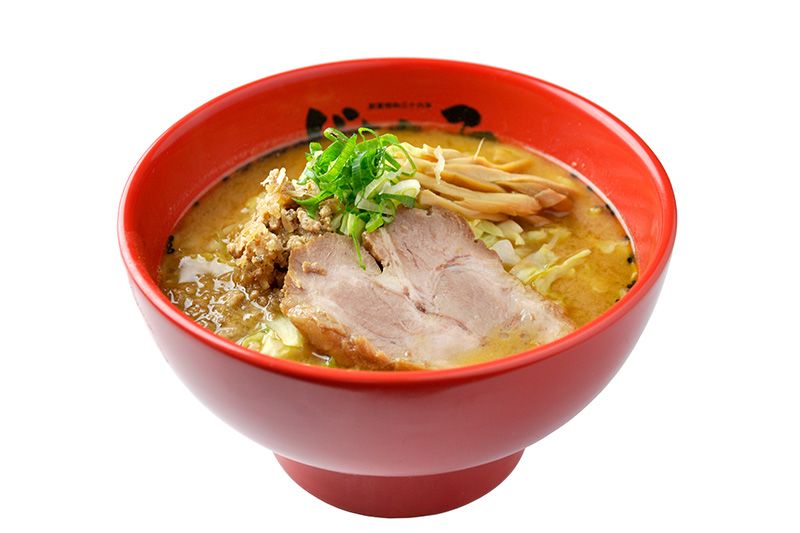 Dosanko’s management had anticipated a surge in popularity for Japanese dining in North America. That surge finally occurred, but the initial beneficiaries were sushi and teriyaki chicken. Only later did substantial demand for ramen begin to materialize.

Underpinned by a revitalized corporate foundation, Dosanko moved to capitalize on the recent growth in popularity for ramen outside Japan. Management secured assistance from Chikaranomoto, a Japanese pioneer in overseas ramen restauranteuring under the Ippūdō name, and reentered the global market.

Dosanko’s business model in overseas markets calls for establishing a foothold through company-owned shops and then expanding through franchising. The biggest challenge, according to Ina, is achieving and maintaining Japanese levels of flavor and service. Dosanko presently supplies its overseas shops with frozen noodles shipped from Japan. But sustainable growth will depend on securing reliable local sources of noodles and other ingredients, and the company is moving to cultivate suppliers.

Ears perked up in December 2014 at the announcement of a ¥2 billion grant from the Cool Japan Fund to Dosanko’s mentor, Chikaranomoto. The Cool Japan Fund is a joint undertaking by the Japanese government and several Japanese corporations to promote Japanese culture overseas. Its grant to Chikaranomoto is to support expanded business in opening and operating ramen shops in North America, Europe, and Oceania. Chikaranomoto will use some of the grant to establish local production platforms for high-quality noodles, broth, and other ramen ingredients.

Inoue Takuma, a dot-com veteran, launched Gourmet Innovation in 2010 to commercialize his idea for a delivery service portal for ramen. He dubbed the service Takumen, for delivery (taku) of noodles (men). What’s special about Takumen is that it handles dishes from famous ramen shops.

Japanese ramen shops that earn reputations for especially delicious ramen draw long lines of aficionados. That presents an obstacle for busy people, eager though they might be for a taste of the shops’ offerings. Another obstacle is the reticence of some ramen-loving women to go alone to shops, where the clientele is mainly male. Yet another obstacle is geography: a shop that captures the interest of an aficionado might be at the other end of the archipelago.

Gourmet Innovation’s Takumen service allows people to order ramen dishes from the shops of their choice online. The dishes arrive as frozen ingredients—noodles, broth, and toppings—for the customers to prepare in their homes. And the dishes are the real thing, having been prepared by the shops for delivery through the Takumen service.

Customers love the service because of its convenience. And the shop proprietors love the way it allows for doing productive work during off-peak hours. They prepare the frozen meals during the off-peak hours and ship them to Gourmet Innovation, which stores them in a freezer warehouse.

Singapore is an intensely competitive market for ramen restauranteurs. The city-state hosts more than 100 ramen restaurants, including company-owned shops and franchisees of prominent Japanese chains. Gourmet Innovation is tackling that market with an interesting twist on its Japanese business model.

In Singapore, Gourmet Innovation has eschewed its online format in favor of an in-shop dining format. But it has retained the gourmet-marketing approach of offering meals from highly regarded shops. And it has employed the Takumen name for its Singaporean shops. 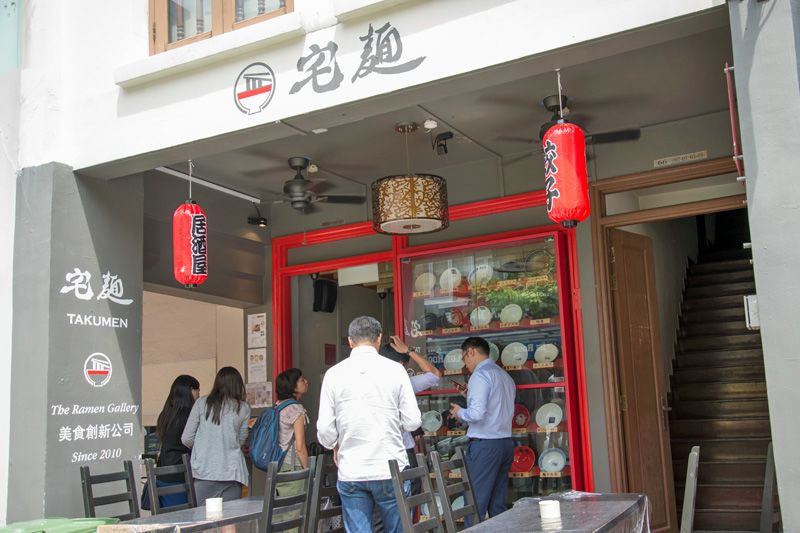 A Takumen shop in Singapore. 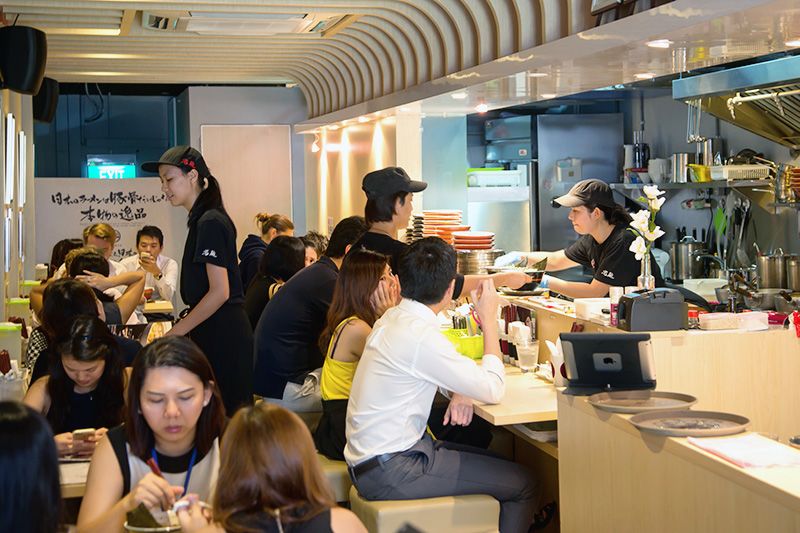 Gourmet Innovation’s Inoue brought the proprietors of the Japanese ramen shops to Singapore to inspect the Takumen shops before they opened. They tweaked the food-preparation procedures and other details to ensure faithful re-creations of their shops’ dishes. 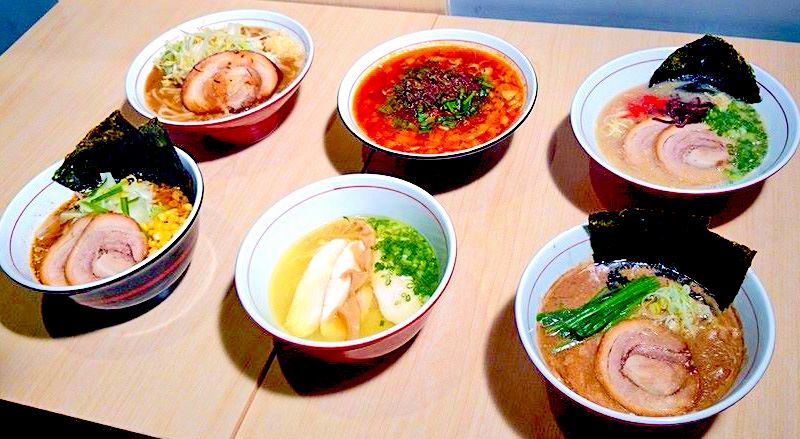 The six varieties of ramen that Gourmet Innovation offers at its Takumen shops in Singapore.

“I’m happy to leave the overseas business up to Takumen,” commented Do Miso proprietor Saitō Kenji. “I want to concentrate for the time being on exploring possibilities in Japan. In any case, people outside Japan today pretty much just assume that ‘ramen’ means tonkotsu ramen. But as they become more sophisticated in regard to ramen, they’ll develop an interest in other varieties. And miso ramen will win a lot of fans in the years ahead.”

The Takumen shops attract their share of Japanese expatriates and tourists. “But non-Japanese residents account for about three-fourths of our clientele,” reports Inoue. “Each of the six varieties of ramen that we serve has gained a loyal following. And our customers say that they love the food, and that it’s like nothing they’ve ever tasted before.” 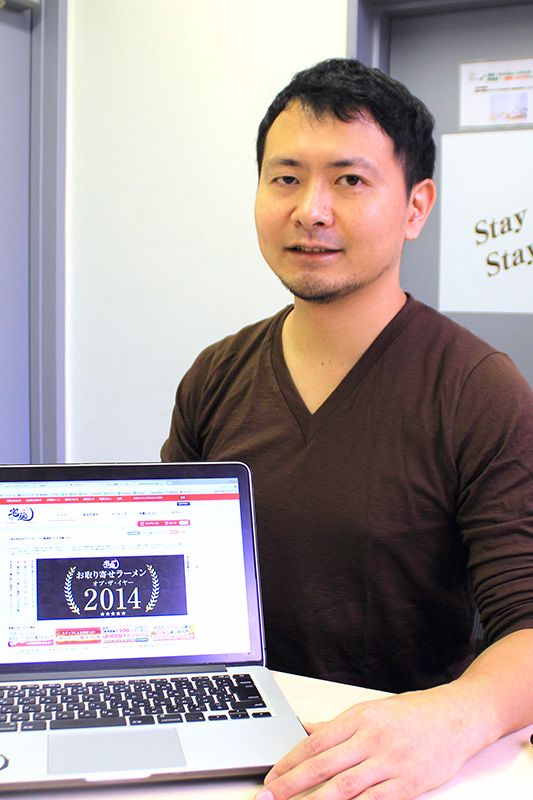 “We have devoted ourselves since day one,” Inoue emphasizes, “to cultivating relationships with partners that offer appealing menus and reliable quality.” Inoue and his people have also devoted themselves to winning the confidence of their partners. They go out of their way, for example, to minimize financial risk for the partners. That includes buying the ramen ingredients outright, rather than on consignment. In addition, Gourmet Innovation compensates the suppliers for their recipes and technical supervision with a percentage of sales.

“Our business model in Japan has generated invaluable relationships with a large cast of highly regarded ramen shops,” notes Inoue. “Those relationships positioned us ideally to serve the growing demand for ramen overseas with a full palette of Japanese offerings.”

Gourmet Innovation brews the broth locally in Singapore for the six varieties of ramen that its shops serve there. It even makes some of the noodles locally. But that hasn’t entailed any compromises in flavor. “Our partners from Japan who traveled to Singapore to inspect our operations there were really impressed,” beams Inoue. “They said that they couldn’t believe how thorough we had been.”

“Potentially as Big or Bigger than Japan”

“It’s potentially as big or bigger than Japan,” opines Inoue of the overseas market. “Overseas turnover presently totals something over ¥100 billion, and that total is bound to grow.” Inoue expects corporate restaurant operators to serve most of the growth that he foresees for ramen dining outside Japan. “Individual owners run most of the ramen shops in Japan,” he notes. “But a handful of companies will dominate the market in other nations.”

Inoue intends for Gourmet Innovation to be one of the “handful of companies.” “We’re aiming to have 100 overseas outlets in five years,” he reveals. “This will really take off when a critical mass of ramen aficionados materializes in each nation and when the aficionados start exchanging information on the Internet.”

Gourmet Innovation is whetting appetites in its target nations with websites that carry local-language translations of Japanese information about ramen. The founder’s Internet savvy promises to serve his company well in propagating the noodles throughout Asia.

(Originally written in Japanese by Ishii Masato of Nippon.com and published on July 27, 2015. Banner photo: Takumen has brought a new dimension to Singapore’s ramen scene.)