A Glimpse of Nagasaki: 70 Years After the Atomic Bomb

Society Culture Aug 5, 2015
For centuries the port city of Nagasaki was a window for foreign trade, visited by ships from China, Korea, and countries as far away as Europe. At 11:02 a.m. on August 9, 1945, 374 years after the first Portuguese trader landed at its port, an atomic bomb detonated over the city, spreading death and destruction. Together with Hiroshima, Nagasaki stands as a “legacy of tragedy” and an invocation of peace.

As each anniversary of the atomic bombings of Hiroshima and Nagasaki passes by, hibakusha, or atomic bomb survivors, continue to grow older while their numbers slowly dwindle. According to Ministry of Health, Labor, and Welfare figures, as of March 2015 the average age of the 183,519 registered atomic bomb survivors was 80.13, marking the first time for the figure to hit the octogenarian range. The previous year saw 9,200 hibakusha pass away, the largest number to date. There are currently 47,868 and 83,367 hibakusha living in Nagasaki and Hiroshima Prefectures, respectively.

These figures represent more than the loss of survivors; they are the loss of storytellers. When the atomic bomb detonated over Nagasaki, only a handful of people within a 500-meter radius of the hypocenter survived the ensuing blast. Of these, only one is still alive to share the story of their ordeal.

Facing the steady loss of those able to bear witness, Karukaya Ken of the Nagasaki Atomic Bomb Museum unwaveringly points to the inevitable: a time when no survivors remain. “This makes recording their stories all the more important,” says Karukaya.

A Twist of Fate

In August 1945 the United States selected the cities of Hiroshima, Kokura, Nagasaki, and Niigata as potential targets for the atomic bomb—a new weapon the leaders of the country hoped would hasten the end of the Pacific War. The first nuclear weapon to be used in wartime, a uranium-cored bomb code-named “Little Boy,” detonated over the skies of Hiroshima on August 6. 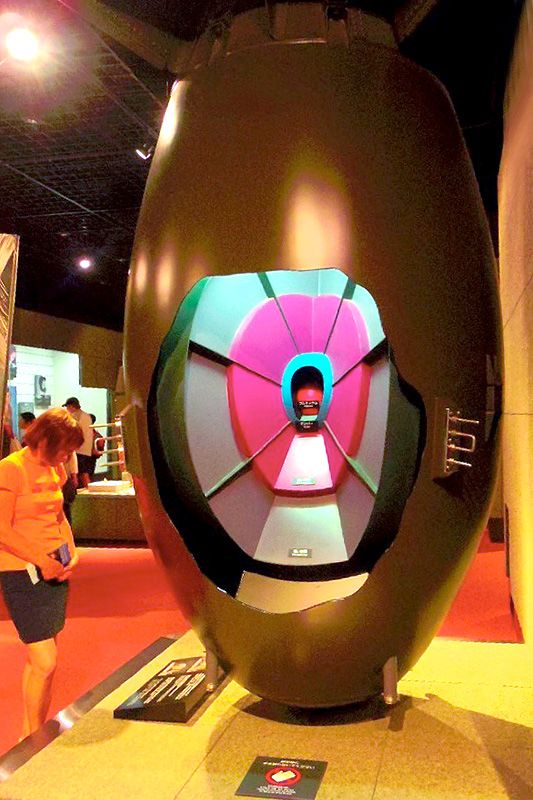 A replica of “Fat Man” on display at the Nagasaki Atomic Bomb Museum.

Three days later, the US B-29 bomber Bockscar took off with the second and last nuclear weapon to be used, the plutonium-cored “Fat Man.” The plane left Tinian in the Mariana Islands in the early morning hours of August 9. The primary target for the bomb was Kokura in Fukuoka Prefecture, but due to cloud cover over the city, the plane continued on to its secondary target of Nagasaki.

During a recent visit to the city I spoke with Chita Masanobu, director of the Nagasaki National Peace Memorial Hall for the Atomic Bomb Victims, who shared some of the historical twists of that fateful day. “There were some who felt the bomber should return to base,” explains Chita, “but the weight of the weapon, which was over 4,000 kilograms, made that impossible.” He then told how the bomber Bockscar, low on fuel after dropping its payload on Nagasaki, had to land in Okinawa instead of returning to Tinian.

The bomb fell shy of its intended military targets, the Mitsubishi munition and industrial plants, and detonated over the Urakami Cathedral, a holy site for Nagasaki’s Christians. The explosion turned the district around the cathedral into a smoldering ruin, killing an estimated 8,500 of the 12,000 Japanese Catholics living there. 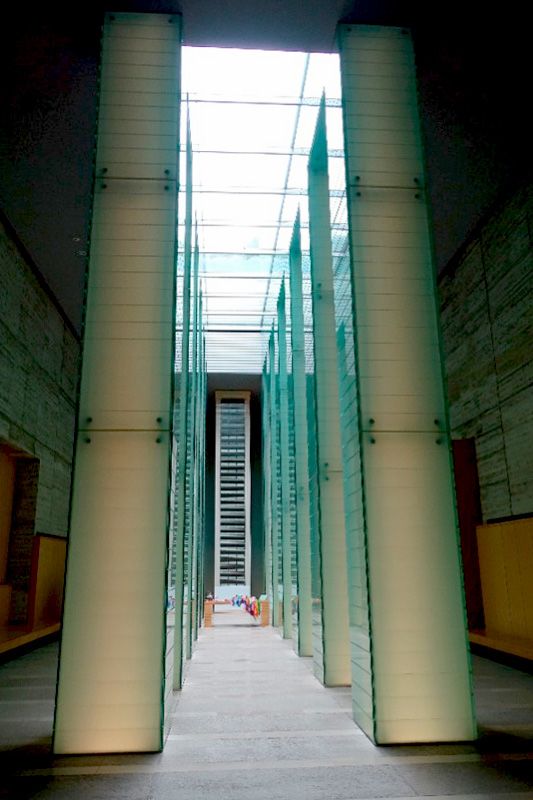 According to municipal records, through December 1945 there were 73,884 fatalities and 74,909 injuries due to the bombing. This accounted for 62% of the city’s population, which at the time stood at around 240,000.

The Nagasaki National Peace Memorial Hall for the Atomic Bomb Victims stands next to the Atomic Bomb Museum. The hall houses a list of victims, as well as hibakusha who are now deceased, with new names added to the rolls each year. As of the end of 2014, the facility held 167 books imprinted with 165,425 names.

A short distance from where this list is kept is a basin marking the hypocenter of the bomb. Brimming with water, it stands as a reminder of the pleas of the dying for a drink to quench their burning thirst. Visitors can also view in the facility’s library handwritten accounts from 36,400 hibakusha.

The Peace Memorial Hall also serves to remind visitors that Japanese were not alone in suffering the effects of the atomic bomb. Although exact figures are unknown, as many as 13,000 Koreans, 650 Chinese, and 200 other foreigners are thought to have perished in Nagasaki.

The Nagasaki Atomic Bomb Museum replaced the Nagasaki International Culture Hall, which had stood on the site as a symbol of the city’s wish for lasting peace since 1955. Completed in 1996, the museum houses documents and artifacts related to the bombing.

In the year through March 2015 the museum saw around 670,000 visitors, including roughly 59,000 from English speaking countries, 26,000 from South Korea, and 25,000 from China. Top diplomats from around the world have also recently toured the museum, including Taous Feroukhi, president of the Nonproliferation Treaty 2015 Review Conference, and US Ambassador to Japan Caroline Kennedy. Ambassador Kennedy, in particular, spoke of being deeply moved during her visit and affirmed her commitment to supporting hibakusha.

There are strong hopes that world leaders including US President Barack Obama, as well as those from neighboring China and South Korea, will also visit Nagasaki and hear the survivors’ testimonies. 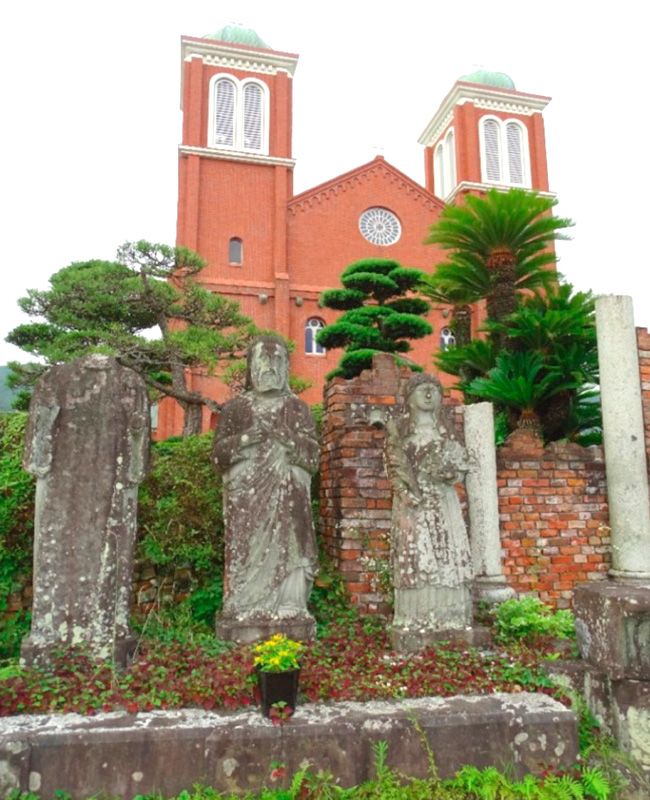 Statues scarred by the atomic bomb stand outside the Urakami Cathedral, rebuilt in 1959.

One of the most compelling exhibits at the museum is a re-creation of the south wall of the Urakami Cathedral, the only section of the structure to survive the bombing. Also on display is a statue of the Virgin Mary and other stone carvings from the church that bear the scars of the atomic blast.

Christianity was outlawed during the Edo period (1603–1868) and followers, if caught, were severely punished. The faithful remained underground for over two and a half centuries until the establishment of a modern government assured they could worship freely. These former kakure Kirishitan, or “hidden Christians,” in Nagasaki’s Urakami district toiled for three decades to construct a red brick, Western-styled cathedral. It was finally completed in 1925. Twenty years later, the atomic bomb destroyed the structure in an instant.

Following the end of World War II, debate took place over reconstructing the cathedral. Many parishioners wanted the church, a symbol of the years of suffering endured as kakure Kirishitan, rebuilt in a way that also preserved it as a relic of the atomic bombing. There were others, however, who wanted to remove completely the memories of the event from their place of worship.

In the end, the remnants of the original cathedral were removed and the structure was rebuilt in concrete in 1959. The relics from the church are now on display at the Atomic Bomb Museum and other facilities.

A half-century later, in 2009, the book Nagasaki kieta mō hitotsu no “genbaku dōmu” (Nagasaki’s Missing Atomic Bomb Dome) by Takase Tsuyoshi caused a stir among the Urakami faithful by calling into question the motives behind the reconstruction of the cathedral. The book argues that despite being a symbol for Japanese Catholics, the decision to rebuild the Urakami Cathedral was influenced by pressure from outside the community, including from the United States.

According to Takase, Nagasaki city officials were planning to preserve the site of the cathedral. However, after Mayor Tagawa Tsutomu returned from visiting Saint Paul, Minnesota, in 1955 as part of a planned sister-city agreement, he changed course and voiced support for rebuilding the church. Following this, notes the author, efforts to raise funds for the construction were carried out in the United States.

The book made a provocative claim, but according to Chita Masanobu of the National Peace Memorial Hall, it failed to prove anything for certain. “There are many opinions on the topic,” says Chita, “but there’s no way of knowing what actually led to the decision to rebuild.”

Saint Paul and Nagasaki are celebrating their sixtieth anniversary as sister cities. The Atomic Bomb Museum will loan its “Hiroshima Nagasaki Peace Exhibition” materials to Saint Paul, which plans to display them for three months from August.

The Long Road to Disarmament

Had the remains of the Urakawa Cathedral been preserved, they, like the Atomic Bomb Dome in Hiroshima, could well have received World Heritage status. There may have been an aversion among Catholics to include relics of the atrocity in a place of worship, but it is difficult to say to what degree this was a factor. What can be said for certain, though, is that the Christians of Urakami have been resolute in the face of such speculation, remaining steadfast in speaking of the horrors of the atomic bomb and sharing their stories and mementos of the event with the world.

As long as the prospect of nuclear proliferation remains, one hopes that the legacies of Hiroshima and Nagasaki will stand from one generation to the next as symbols of peace and hopes of a world without atomic weapons. It bears remembering, though, that it took more than four decades after the bombing for the Nagasaki City Council to pass the Nagasaki Citizens Peace Charter. Traversing the road forward requires perseverance and time.

(Banner photo: The Peace Statue inside the Nagasaki Peace Park. The statue was completed in 1955 with donations from around the world.)