Saint Francis Xavier and the Roots of Christianity in Japan

Politics Society Aug 27, 2015
Arriving in Japan in 1549, Jesuit priest Francis Xavier played a key role in the early spread of Christianity in the country. His missionary work included preaching in Hirado in the northwest of present-day Nagasaki Prefecture, where Christianity took root most firmly and “hidden Christians” preserved the faith during centuries of prohibition. Today Hirado is home to numerous historic churches, testifying to the enduring influence of Spanish and Portuguese missionaries.

The arrival of the Jesuit priest Francis Xavier (1506–52) on Hirado in the summer of 1550 marked a major historical turning point for the remote Kyūshū island as it developed into a center for Christianity in Japan. The Spanish missionary first landed in Kagoshima in 1549 before moving to Hirado in the northwest of what is now Nagasaki Prefecture, spending a total of two years and three months in Japan preaching Christianity.

It is said that Xavier was able to convert around 100 Japanese to Christianity in Kagoshima by discovering points of similarity between Christian teachings and Buddhism. However, after hearing that a Portuguese ship had arrived in Hirado in June 1550, he traveled to the island in July of the same year, accompanied by Father Cosme de Torres and another missionary, Juan Fernandez.

The mission in Kagoshima was left to Japan’s first Christian convert, Anjirō (also known as Yajirō and later as Paulo de Santa Fé), who had helped provide the impetus for Xavier’s voyage to Japan. The two men met in Malacca (now in Malaysia), a fortified city that was a hub for international trade at the time. Although there is little reliable evidence about the life of Anjirō, he is thought to have fled overseas on a Portuguese ship after committing a murder in Kagoshima. He returned with Xavier in 1549. 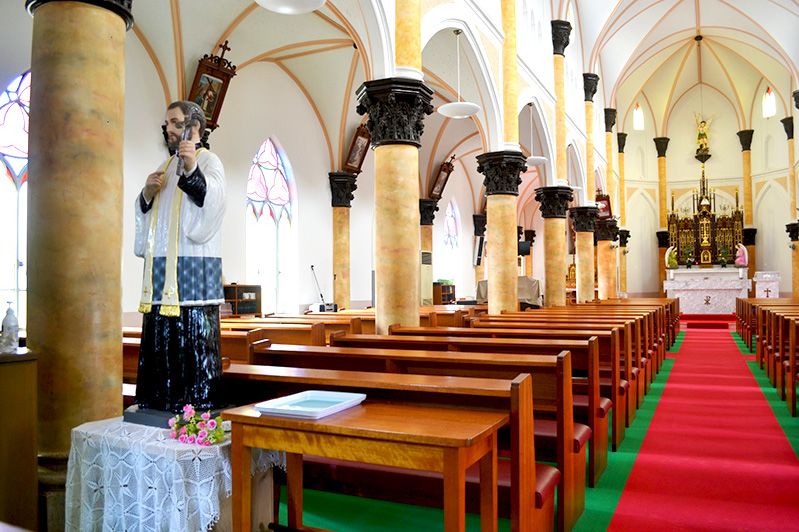 Xavier is said to have won more converts in just 20 days of proselytizing in Hirado than he did in a whole year in Kagoshima. In January 1551, Japan’s first church was built on the island, the remains of which are in Sakigata Park near the restored Dutch Trading Post.

Meanwhile, Xavier had set off for Kyoto in October 1550, seeking an audience with the emperor where he would request permission to preach Christianity throughout Japan—further evidence of his success in Hirado. He traveled to Kyoto via Yamaguchi along with the missionaries Fernandez and Bernardo, but the tumult of the Warring States period (1467–1568) had left the ancient capital in ruins. On discovering the emperor was a powerless figurehead, a disillusioned Xavier returned to Yamaguchi. During this time Torres took responsibility for missionary work in Hirado.

Xavier was allowed to use an abandoned Buddhist temple in Yamaguchi, where he preached for several months. Historical documents state that he converted more than 500 Japanese in the six months leading up to March 1551. A return visit to Hirado in April was probably connected with the construction of the church there.

To India and China

In September 1551, a Portuguese ship arrived in the province of Bungo (now Oita Prefecture) in Kyūshū. Xavier traveled there to hear news of the Jesuit missions in India. Concluding that he was needed more in India than he was in Japan, he immediately took passage on the Portuguese ship.

That was the end of Xavier’s stay in Japan, but the country remained on his mind. Seeing the influence Chinese culture had on Japan, he decided to move on to China and look for converts there. He arrived on the island Shangchuan in September 1552, but was ultimately unable to reach the mainland, dying on December 3 of illness exacerbated by physical and mental exhaustion. He was 46 years old.

Some of the missionaries who traveled to Japan with Xavier continued their evangelical activities, but just a few years after his death, the persecution and execution of Portuguese, Spanish, and Japanese Christians began.

As Christianity spread, its influence came to threaten the dominance of Buddhism and the very power of the central government, resulting in it being treated with hostility and persecution. The first Christian martyr in Japan is said to be Maria Osen, a Hirado woman who was executed in 1559 after disobeying her husband’s order not to worship the cross.

The most famous of the Hirado martyrs, however, was Sebastian Kimura (1565–1622), who became the first Japanese Catholic priest. The Kimura family had been instructed by Matsura Takanobu, the daimyō of Hirado, to provide hospitality for Xavier when he arrived on the island in 1550. A translation of selected Bible scriptures, completed while Xavier was in Kagoshima, made a strong impression on the head of the Kimura household, who was among the first 100 Hirado inhabitants to be baptized, receiving the Christian name of Antonio.

The descendants of Antonio Kimura were closely connected with the subsequent history of Christianity in the area. Antonio’s grandson Sebastian was born in 1565 and baptized at an early age. When he was 12, he became an assistant to a Catholic priest, performing a similar role to Buddhist novices of the day.

Despite the initial reluctance of the Jesuits to appoint Japanese priests, by around 1580 they had come to see the importance of engaging locals in furthering their evangelizing mission. In 1585, at the age of 19, Sebastian Kimura joined the Society of Jesus.

Just two years later, on July 24, 1587, shortly before completing the reunification of Japan, warlord Toyotomi Hideyoshi issued the Edict of Expulsion, forcing the Jesuits out of Kyoto and other locations. While some went to India, others retreated to Hirado or Nagasaki, which were overwhelmingly Christian. Here regional leaders and even daimyōs had been baptized, and it would be many years before the expulsion edict was successfully enacted in these areas. 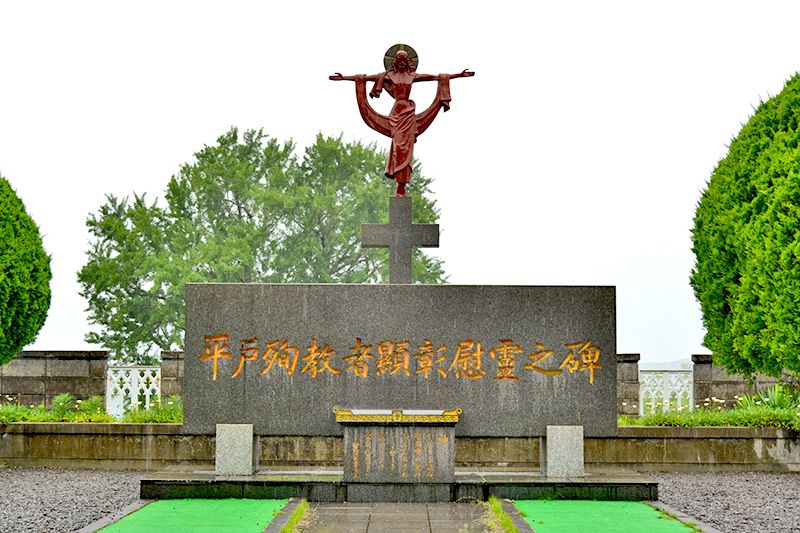 Monument to the Hirado martyrs.

Under these circumstances, Sebastian Kimura continued his learning in such refuges as Shimabara and Amakusa. In 1595, he achieved another precedent by becoming the first Japanese to attend the Jesuit college in Macau.

In 1600, the same year that Tokugawa Ieyasu established control of Japan at the Battle of Sekigahara, Sebastian Kimura returned to his homeland from Macau. In September 1601, at the age of 36, he was ordained as a priest.

He was first assigned to Kawachinoura in Hirado. But in 1614, persecution of Christians intensified and many priests were driven out of the country, although a considerable number of faithful continued to worship in secret. On June 29, 1621, Sebastian Kimura was betrayed to the authorities by a female servant who had been brought to Japan as a slave from Korea and who believed that by doing so she would win her freedom. Kimura and other believers were apprehended and ultimately beheaded or burned alive at the hill of Nishizaka in September 1622.

Despite persecution, many Christians remained hidden, secretly worshiping for centuries until they were discovered in March 1865 by the French priest Bernard Petitjean.

The Return of Christianity

In 1873, the newly established Meiji government lifted the prohibition on Christianity. However, it was several decades before Catholic churches were again built on the rugged terrain of Hirado. The Jesuits did not return to Japan until the early twentieth century.

Today there are around 130 churches in Nagasaki Prefecture, many of them in Hirado. The best known of these is St. Francis Xavier Memorial Church, which was built in 1931 to replace an earlier structure established in 1913. To celebrate its fortieth anniversary in 1971, a statue of the Spanish missionary was put up nearby. While the church steeple can be seen from many of the streets of Hirado, the most famous vantage point offers a view of it rising up between the temples of Kōmyōji and Zuiunji. 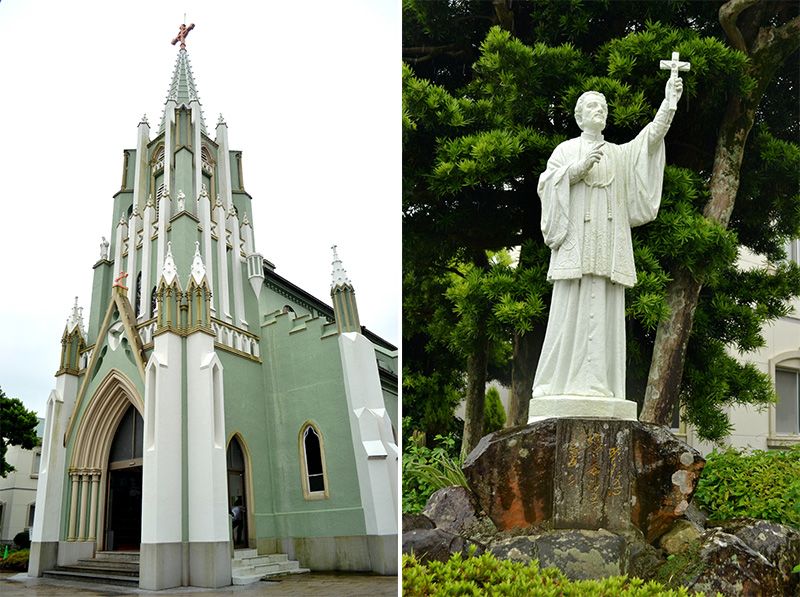 External view of St. Francis Xavier Memorial Church in Hirado and a statue of the Spanish missionary.

The Churches of Hirado

The oldest church still standing on Hirado is Hōki Church, which was constructed in 1898. Believers originally built an altar near its present location in 1878. The church is notable for its brick façade and wooden side walls, which make it unique among Japanese churches. In 2003, it was designated as a tangible cultural property by the Nagasaki Prefectural Government. The church was a significant factor in the Hōki district’s selection by the national government as an important cultural landscape in 2010.

Hōki Church is notable for its brick façade and wooden side walls.

Another of the important churches in the area is Yamada Church on the island of Ikitsuki. Constructed in 1912, the church was designed by Tetsukawa Yosuke, who was much respected for his religious architecture. Ikitsuki’s remote location beyond Hirado made it one of the best-known places where hidden Christians (kakure Kirishitan) preserved their faith through the 250 years it was outlawed. The long isolation fostered a distinct form of Christianity, which some still practice today.

Himosashi Church, also designed by Tetsukawa, was built in 1929 in imitation of the European Romanesque style. For many years it was Japan’s largest church, until the reconstruction of Nagasaki’s Urakami Cathedral following its destruction in the 1945 atomic bombing. The white walls stand out against the blue of the sky, while interior floral elements attest to the Buddhist influence prevalent in Testukawa’s work.

Himosashi Church is the largest church in Hirado.

Kigatsu Church, converted from a wooden school gymnasium in 1962, is also fascinating, despite its unassuming outer appearance. Inside the building are 14 illustrations of the Stations of the Cross by Nagai Takashi, a survivor of the bombing of Nagasaki and a major figure in modern Japanese Christianity.

Kigatsu Church and an illustration by Nagai Takashi of one of the stages in the Stations of the Cross.

Hirado ranks alongside Nagasaki as one of the Japanese places most strongly influenced by Christianity. The Hirado churches are of particular historical significance and the focus of efforts to boost tourism among Catholics, as well as Christians in general, especially in this year that marks the 150th anniversary of the rediscovery of hidden Christians.