The War and Its Aftermath

Society Dec 8, 2017
As the hibakusha population dwindles, we move closer to a time when no victims of the atomic bombing of Hiroshima will be alive to share their stories of loss and suffering. To keep these accounts alive, Hiroshima has begun a project to train successors to pass down the experiences of A-bomb survivors.

In late autumn, a small group gathered in a conference room at the Hiroshima Peace Memorial Museum to hear a survivor’s account of the atomic bombing of the city. The previous year, then US President Barack Obama made headlines with his historic visit to the city. But on this day the museum is wrapped in its usual air of tranquility as the 15 or so in attendance turn their attention to the storyteller—one much younger than most who have filled her role to date.

The room grows quiet as Hosomitsu Norie, an A-bomb successor, addresses the gathering. “I was born in 1963, and did not experience the atomic bombing of Hiroshima,” she explains in a straightforward tone. “But hibakusha have passed their stories down to me, and it is my role to continue sharing these with the public.”

Hosomitsu is one of around 90 trained storytellers participating in the A-bomb Legacy Successor program, a Hiroshima municipal project to preserve the stories of atomic bomb survivors. Today she is recounting the experience of Kasaoka Sadae, an 85-year-old hibakusha. 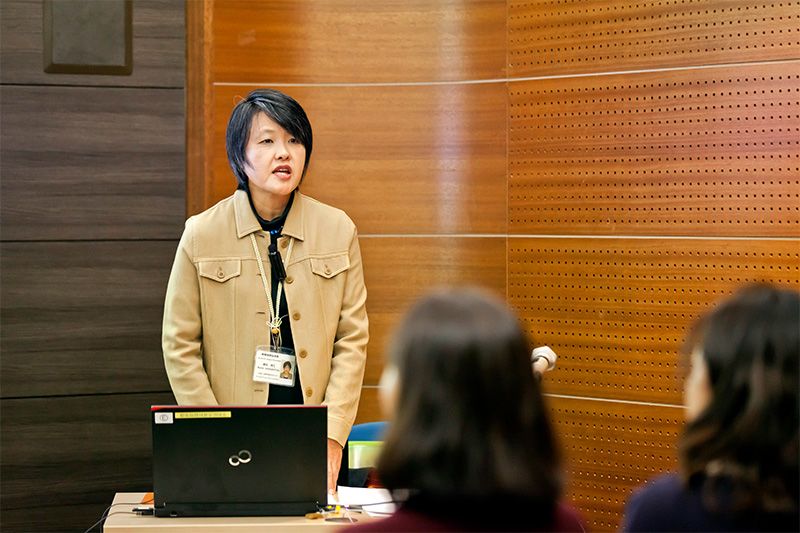 Hosomitsu Norie speaks to an audience at the Hiroshima Peace Memorial Museum.

The speaker first sets the stage for the story, explaining how in the desperate closing days of World War II over 8,000 seventh- and eighth-grade students in Hiroshima were mobilized to knock down buildings to create fire lanes. Speaking in a steady tone, she tells the audience that 6,300 of the youths died in the nuclear explosion.

On the morning of August 6, 1945, Kasaoka, then 12, was at her family’s home just 3.5 kilometers from where the atomic bomb detonated. Hosomitsu recounts her experience, referring to Kasaoka by her given name.

Sadae’s parents left early to help in the demolition effort, heading to an area that was only a kilometer from where the atomic bomb would drop. She ate breakfast with her grandmother, did the washing up, and hung out the laundry to dry in the backyard. She had just stepped back inside and was standing at a window facing the direction of the bomb when the blast occurred.

A strangely beautiful flash, tinged with the orange of a sunrise, filled her vision. The next instant, an enormous boom shattered the window, transforming it into a wall of shredded glass. The blast knocked Sadae unconscious. When she came to, she put her hands on her head and was puzzled to find it wet. 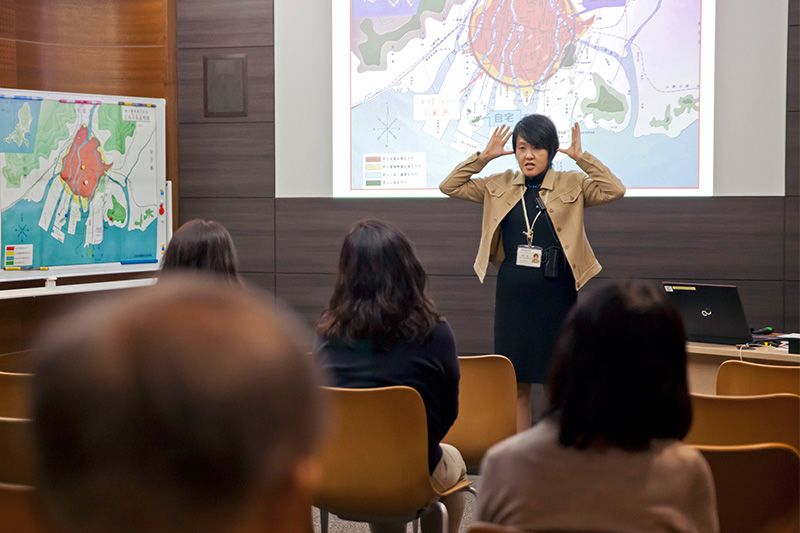 Kasaoka’s head had been cut by the flying glass, explains the storyteller, but she had narrowly escaped grievous injury by instinctively leaning forward and covering her eyes and ears with her hands. She was nearly oblivious to her wounds, though, her senses having gone numb. With her grandmother in tow, she fled to a nearby bomb shelter. When the two emerged some time later, they were greeted by a devastated landscape.

Utility poles leaned at precarious angles, electrical lines hung slack, and bricks and rubble lay strewn across the ground. The only explanation A-bomb victims could find was that a bombing raid had occurred. They could not imagine that a single weapon could cause such widespread devastation. 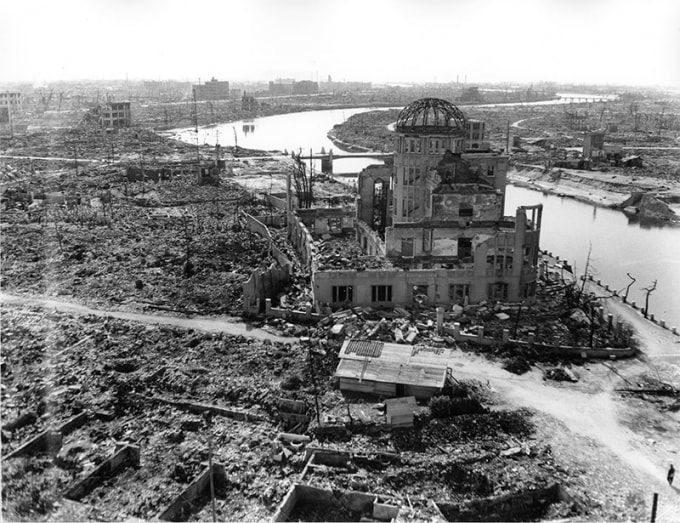 A US military photo taken in November 1945 shows the heavily damaged Hiroshima Prefectural Commercial Exhibition Hall (now the A-bomb Dome) and destruction of the city center. (Courtesy of the Hiroshima Peace Memorial Museum)

Hosomitsu tells the engrossed audience that Kasaoka’s parents were killed in the explosion. Bringing the session to a close, she relates how in the wake of the bombing Kasaoka suffered health problems, including boils and anemia, and that her husband, also a hibakusha, succumbed to spinal cancer at the age of 35, leaving her to raise their two children alone.

More than seven decades after the bombing of Hiroshima, hibakusha are now in their autumn years. According to Japan’s Ministry of Labor, Health, and Welfare, the average age of atomic bomb survivors, as of March 2017, is 81.41 years old. And as the population dwindles, society is inching toward a time when there will be no witnesses alive to give first-hand testimony about the horrors of nuclear weapons. 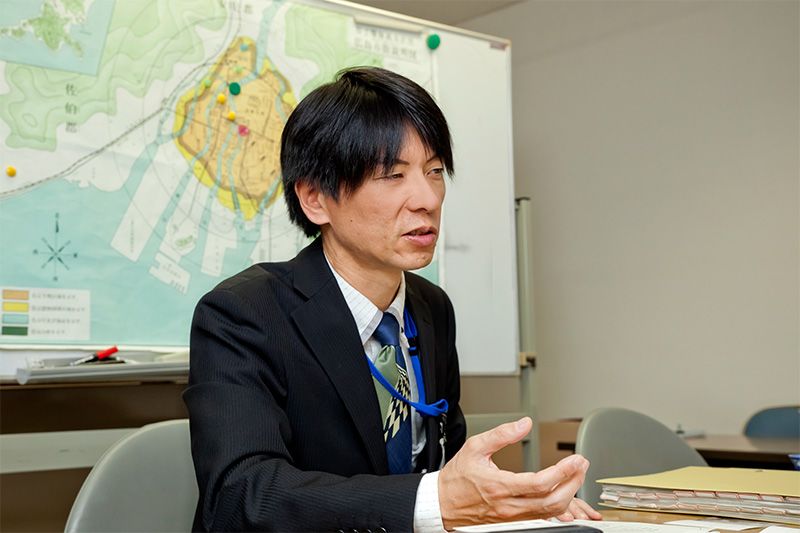 Nakagawa Haruaki, director of Hiroshima’s International Peace Promotion Department, says the loss is felt most keenly with hibakusha who regularly give public talks about their experiences. “We conducted a survey earlier this year and found there are 150 people in this group,” he explains. “They range in age from 71 to 95 years old and include survivors still in the womb when the atomic bomb fell. We had expected the figure to be around 200, so it was a really an eye opener to see just how many prominent hibakusha had passed away.”

Faced with the urgency of the situation, Hiroshima in 2012 initiated the A-bomb Legacy Successor program to keep the stories of the dwindling number of hibakusha alive. Under the initiative, participants known as A-bomb successors spend at least three years learning the stories of survivors in depth. As of October 2017, there are 243 trainees of varying ages, 89 active successors, and 15 mentor hibakusha who pass down their stories.

Nakagawa says the program is open to all, including people from outside Hiroshima. After completing training, participants are recognized as official A-bomb successors by the Hiroshima Peace Culture Foundation and can begin lecturing, mainly at the museum, which holds three presentation sessions a day, and at local schools. Presentations are generally in Japanese, but several participants have been trained to give lectures in English.

In 2016 A-bomb successors gave more than 1,000 presentations, speaking to over 16,000 people. The program is still in its infancy, though, and Nakagawa understands there is plenty room for improvement. “The response has been wonderful so far, but many people feel the presentations still need work,” he explains. “It will take time, and we are looking to smooth out the wrinkles over the long run.” 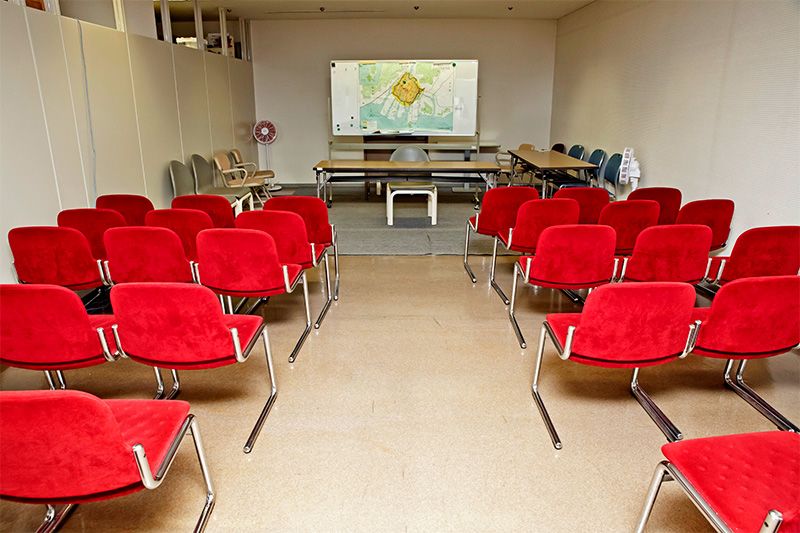 One of the rooms where successors are trained.

Becoming an A-bomb successor requires a deep level of commitment. During the first year of training, participants attend lectures by hibakusha and receive coaching in public speaking. In the second year they are tasked with learning the stories of mentor A-bomb survivors. This includes shadowing mentors at speaking events and working together to create scripts based on their experiences. The third and final year is spent gaining practical experience, refining presentations, and honing storytelling skills. At the end of the training period, participant must receive approval from the hibakusha they have studied under to be officially recognized as A-bomb successors. 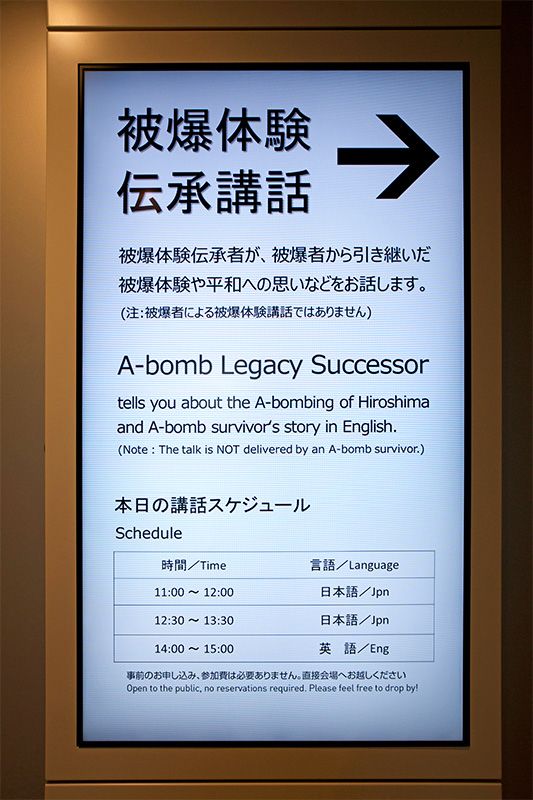 A panel gives the times for lectures by A-bomb successors.

The most formidable hurdle during the three-year training period is creating a script of a hibakusha’s experience. The unique and moving experiences of A-bomb survivors can be incredibly difficult for others to convey, and many participants find themselves overwhelmed by the challenge.

Those who become A-bomb successors, though, inherit the important duty of passing on testimonies of atomic bomb survivors. As might be expected, many people prefer to hear testimonies first hand from hibakusha, and for the time being the successors mainly serve a secondary role.

“Some people feel it’s still too early to have successors sharing the stories of hibakusha,” says Nakagawa. “But we can’t wait until the last atomic bomb survivor passes on. It’s crucial to start the process of training the successors while hibakusha are still physically and mentally able to directly hand down their experiences.”

Passing on the Messages

The A-bomb successor project has been welcomed by many hibakusha, including Kasaoka Sadae. She gave a video testimony for the museum, but in her view, speaking directly to people has far greater impact. 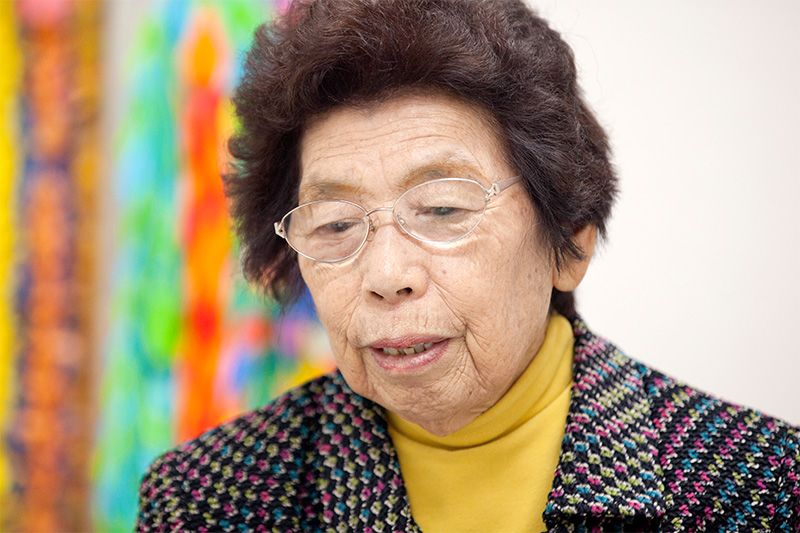 Kasaoka Sadae, now in her eighties, still sees great value in talking about her own experience. 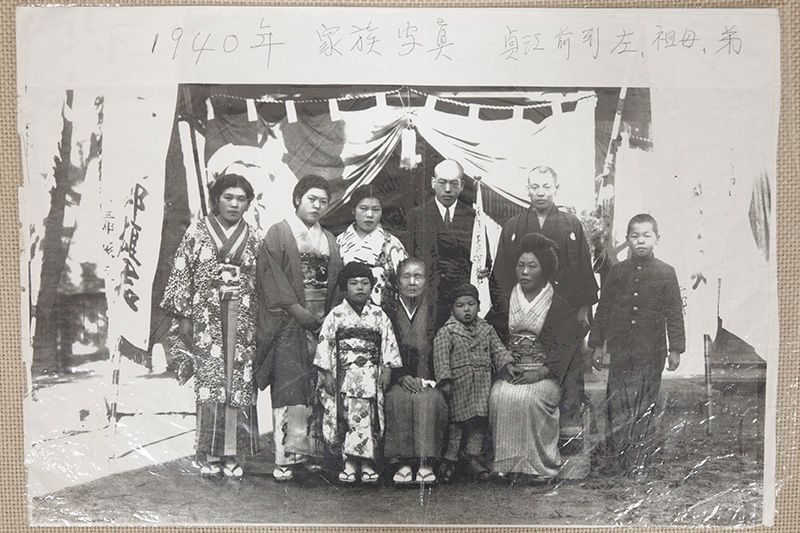 “There’s no comparing the two” exclaims Kasaoka. “From the start I’ve told children to listen with their hearts. I don’t even mind if they nod off, just as long my words reverberate in their bosoms. You can’t create the same degree of connection with a video.”

To date Kasaoka has mentored six A-bomb successors. She says she carefully went over scripts they produced and demanded amendments to make sure the accounts truthfully reflected her experience. Despite the challenges, though, she was motivated by the understanding that she has limited time left to share what she remembers. Knowing that successors will keep hers and other testimonies alive for future generations gives her hope.

Hosomitsu Norie was among the first wave of participants to join the project. She had previously worked at an NPO campaigning to abolish nuclear weapons and had grown concerned at the indifference many youths showed toward the stories of atomic bomb survivors. She initially balked at the long training period and the weighty responsibility, but eventually overcame her apprehension, feeling that even if she could not complete the training, it was more important to do what she could to help bolster the program. 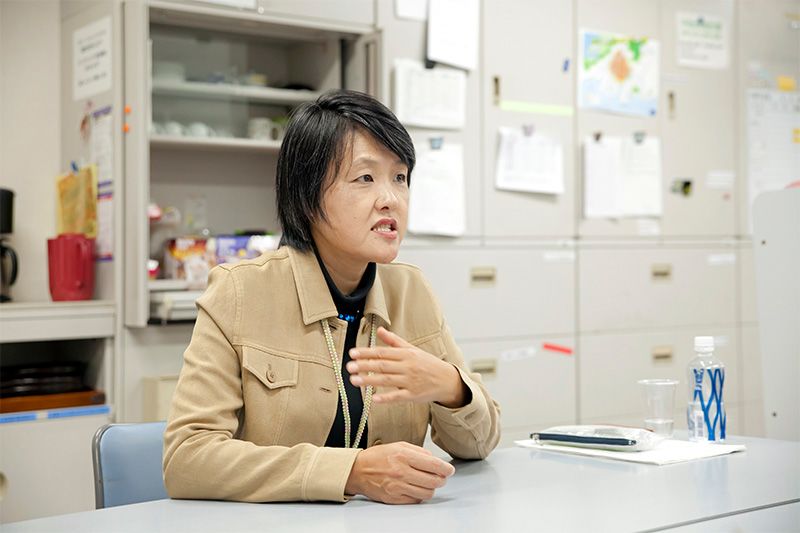 Prompted by a strong sense of duty, she completed the training in the minimum number of three years while holding down a regular job. During that time, she attended testimonials given by Kasaoka and other hibakusha as many as four times a month and persistently interviewed her mentors. Her hard work paid off, and she was designated an A-bomb successor in April 2015.

Hosomitsu currently gives lectures at the museum every month and a half. She says she is confident in her presentation skills and does not do much in the way of follow-up training. “The experiences of the hibakusha are engrained in my body and soul,” she says. “Their stories flow out of me.”

Although she strives to accurately relate the experiences of her mentor hibakusha, she understands the limitations of her position as a surrogate. “I still get nervous,” she says. “Only survivors truly understand the scale of suffering wrought by the atomic bomb. The best I can do is honestly convey their stories.”

For Hosomitsu, the connection with hibakusha mentors is spiritual. “If it were just a matter of explaining the experience of a hibakusha, that could be done by reciting a script, or by showing video testimonials,” she says. “But as A-bomb successors we pass along the feelings and emotions of hibakusha. We spend hours watching and listening to our mentors until their experiences become part of us.” Smiling at Kasaoka, she adds, “Through my involvement in the program I have developed a deep affection for her not just as a hibakusha, but as a friend.” 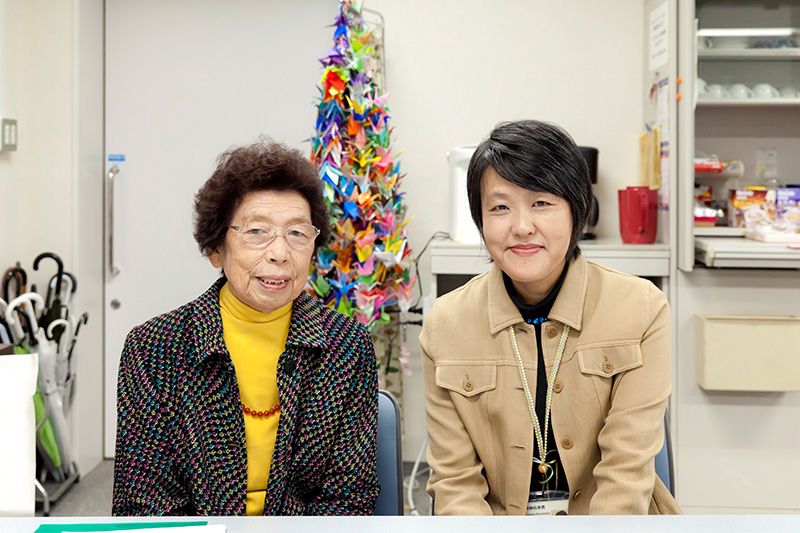 (Originally published in Japanese on November 29, 2017. Banner photo: Workers and visitors outside the A-bomb Dome inside the Hiroshima Peace Memorial Park. Photos by Dōune Hiroko except where noted.)