A Disastrous Kanji of the Year? “Wazawai” Picked as Top Character for 2018

Language Culture Society Dec 12, 2018
The year 2018 brought powerful earthquakes, brutal summer heat, torrential rains and flooding, and terrifying typhoons to Japan. It’s no wonder that the public selected 災 (sai or wazawai), meaning “disaster,” as the kanji of the year.

The Kanji of the Year for 2018 has been announced: 災, pronounced wazawai or sai, meaning “disaster” or “misfortune.”

The Japan Kanji Aptitude Foundation each December announces a “kanji of the year,” selected by popular vote to encapsulate the year that was. Members of the public send in votes by postal mail, an official website, or voting boxes, selecting a single character and often appending an explanation for the choice. This year’s top pick, wazawai, referred to the multitude of natural disasters that afflicted the archipelago during 2018—serious earthquakes in Osaka, Hokkaidō, and Shimane Prefectures, a string of typhoons that battered the nation’s shores, torrential rains causing landslides and flooding, and the record-setting heat of summer. “As we look ahead to the coming year,” noted the JKAF press release, “many are hoping that the new imperial reign will bring with it a lower number of disasters to deal with.”

Wazawai was the clear leader, pulling in more than 10% of the 193,214 votes cast. Coming in second was 平 (hei or taira), a character meaning “peaceful” or “even,” selected by many for its place in 平成 (Heisei), the name of the era that will come to an end when Emperor Akihito abdicates the throne at the end of April 2019. Also echoing this “end of an era” theme was the third-place finisher, 終 (shū/owaru), meaning “end.”

Voters had their eye on the entire world in choosing the winning character, with some of them noting the June eruption of Guatemala’s Volcán de Fuego and the devastating wildfires that swept Greece and the western United States. The second-place 平 (hei), meanwhile, was picked by people noting its presence not just in the era name, but also as the first character in the hanja rendering of Pyeongchang, host of this year’s Winter Olympics, and in Los Angeles Angels slugger/pitcher Ōtani Shōhei’s given name. Third-place finisher 終 (shū; “end”) described the closure of the Tsukiji fish wholesale market, according to one voter’s comment, in addition to the imperial reign. 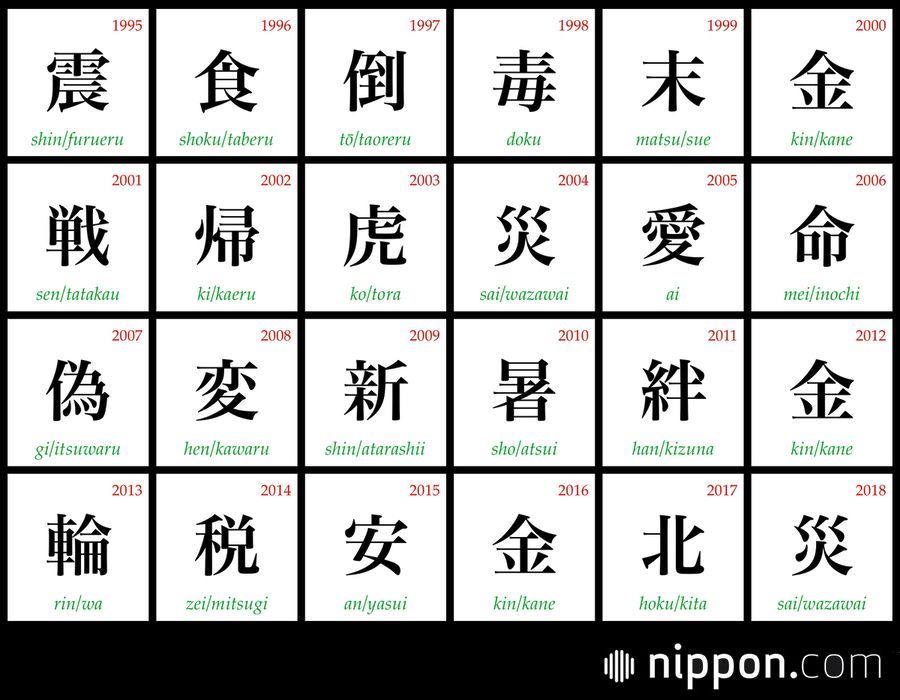 The end of the Heisei era did not provide this year’s winning character, but it did inform many of the other choices, including 変 (hen), the upcoming “change” in the era name; 最 (sai), part of the word saigo, meaning the “last” full year to fall within Heisei; and 新 (shin), the “new” era that is on the way. Rounding out the top 10, 金 (kin) was once again a popular pick in an Olympic year, with Japanese athletes bringing home medals of that color.

As Japan closes out its “disastrous” year, many kanji-watchers are looking ahead to 2019 as a time that will bring fresh characters to choose from, particularly those that are picked to name the reign of Crown Prince Naruhito once he ascends to the throne.